Faves to cook while camping

Assume you are going car camping for the weekend, but you only have a single regular size cooler, and the firebox or firepit that is at the campground. No camp stove. Maybe 1 pan and some foil. The trunk of the car is too full of other things to bring kitchen gadgets. What are some of your favorite things to cook? Obvs, there are burgers and dogs. Last year I think we did chicken fajitas pre-marinated. Lunch is almost always something cold, like sandwiches, or panzanella made at the site, to avoid needing to refrigerate i.e. cooler space. We have a little backpacking waterboil jet, so we’ve done ramen. And oatmeal (b’fast). Couscous. But I am looking for some inspiration. New ideas. Thanks!

Are you looking for tasty food or food for energy?

Well if space is an issue here are some ideas…

you always have beans that you can put in zip lock bags and season them beforehand. They won’t take up that much space. Maybe add rice and you can make soup with your protein of choice. Bullion cubes are small and travel well.

Smoked salmon fillets in the foil packets dont need to be refrigerated and are very thin. Dont bake them in the sun though lol

Strips of beef, pork or chicken you can grill over the fire with your own widdled sticks. They will zip lock up nicely and lay flat.

Bacon…stays good at room temp for a long time sealed. You can just chuck it in your back pack.

Fresh pasta won’t get the crap beaten out of it like hard pasta might. Stash some spices, a little bit of olive oil and maybe some grated cheese.

Some candy…things that won’t melt or get mashed up. Jolly ranchers, taffy is malleable, gum, gummy bears

You’re kind of blowing my mind that salmon and bacon don’t need refrigeration. I would not have guessed that.

We are nut free - allergy in the house. Fresh pasta is an interesting idea. If we did that, I suppose we could cook it in some boiling water in the pan over a fire, then drain out the water and put in some seasonings… Fun idea.

I would do some skewered stuff if you can get a long enough stick - halloumi cubes, cherry tomatoes, mushrooms, shrimp.

Good thought! Very similar to the fajitas (meat/veg) but a skewer lets you turn everything at once. I also just read on WFD about the grilling tofu methods and marinades, so I may give that a whirl.

Bacon will eventually go back into the fridge but it will last days and days sealed. Smoked salmon stays good and doesn’t need to be in a fridge. Remember, smoking was the old refrigeration system for thousands of years lol.

Here is some I have in my cabinet 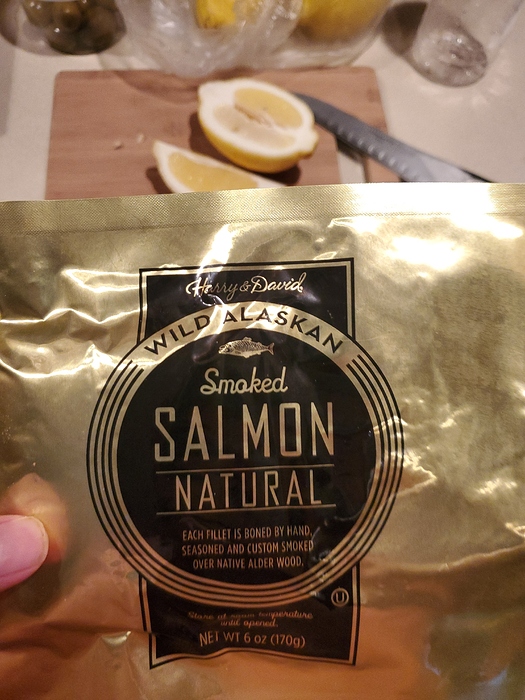 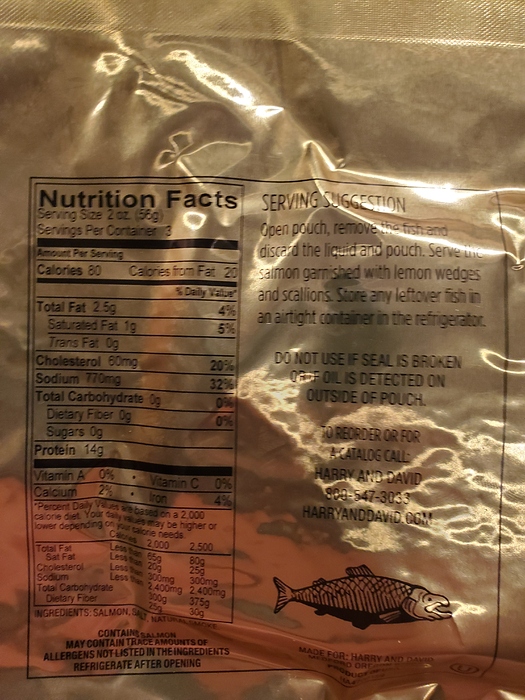 So you are saying the salmon should already be smoked - not to bring raw and cook/smoke it there? That makes more sense. Wheels are already turning with the smoked protein and the fresh pasta.

Tofu’s also a great idea, and maybe your shrimp-averse person would like tuna or swordfish or scallops (I’m good at spending other people’s money). Summer squash is also very nice grilled.

My shrimp averse person (teen son) is averse to all the swimmies. Sadly. I hope he grows out of it. I didn’t much like fish either when I was little, and grew into it. I never had a problem with seafood though. He also doesn’t like squash. He was a better eater as a preschooler, oddly. But we almost don’t cater to him anymore at home, because if he doesn’t eat much, there are cheerios. I guess I can bring a box of cheerios

Yes lol. Pre smoked will stay, not raw. Raw has to be cold.

If you have a cooler I have a bunch more recommendations. I’m recommending stuff you can put in your back pack without it getting smashed or going bad

We’ll have a single cooler. For effectively 48 hours. So we can keep some things cold, but not all the food consumed can be cold. We one time bought a bunch of packaged (foil, tinned) fishies, sardines, oysters, and then pickles olives crackers etc. It was a major fail with the kids who were not into any of the shelf stable proteins.

When I’m car camping my preference is to do things that can somewhat be done ahead of time and frozen. Cuts down on ice space in the cooler and as they thaw they get cooked.

Jambalaya - I make the chicken/andouille and stock ahead of time, freeze, and then heat and add rice to cook in the stock/sauce.

Hearty soups - same thing and then do skillet breads to go with them once there.

Chicken and dumplings - freeze ahead and make bisquick dumplings to simmer in the sauce to cook.

Frozen hash browns - I make mine but grocery store frozen work too. Cooked in the morning with lots of butter.

Not frozen ahead but love bringing can of coconut milk and a can of Thai curry - add to some chicken or beef that you’ve precut and sautéed in the skillet.

I know it’s summer time but what about cooking up a pot of chili. Freeze in gallon ziplocks along with a pack of shredded cheese. That will work as an ice pack. Fritos and crackers to accompany. Then heat up the first night. I’m not the camping type but that was my first thought.

It’s a good thought if the weather was colder. Same reason I struggle with the soups and stews idea. I’m also more willing for it to take longer to make a dinner when we camp by ourselves. Our upcoming trip happens to be with a group, so I’ll want to spend less time cooking and more time chatting with friends. I’ll store this one away though, for late Sept or Oct camping.

Kielbasa, another product with enough nitrites/smoke that it will stay fine out of a fridge for days. Then cook on a stick.

I really like the whole smoked protein idea, and would not have assumed it doesn’t need refrigeration. This will be a great space saver for the cooler.

Make sure if you chuck something in your back pack don’t forgot to take it out if you bring your pack into the tent. Bears have an incredible sense of smell. I saw one RIP open a tent when this novice stored his food inside.

I’ve done a bit of solo camping. Kielbasa, brats or something similar can become the basis of a weekends meals. First night bake foil wrapped potatoes and onions in the fire. Cook the sausage in a pan so you catch the drippings. Usually have a spinach based salad as a side.

If hiking, lunch is leftover sausage, hard cheese like cheddar, nuts, dried fruit, carrot/celery sticks and crackers (oyster hold up well). If lunch is around camp use a pie iron with canned biscuits/sausage/cheese for a hot sandwich.

Dinners can use leftover sausage in stew with onion/celery/carrots and rehydrated mushrooms. Or sausage used to doctor up a can of baked beans.

Lunch the next day spins off of eggs you hardboiled the day before. Carry as is if hiking or add to spinach salad, tuna salad or make egg salad. (I collect condiment packs when I have a camping trip planned.) World Market often has little jars of interesting condiments too.

Having the protein already cooked comes in very handy when the weather makes outdoor cooking difficult.