I’ve had a paper subscription to the NYT for probably 30 years. I do the crossword puzzle everyday. I keep the subscription for that and the NYT Food Section/App which is one of my favorite recipe sources.

I read the daily emails, both news and cooking, read the cooking section, and often find myself there when researching things, but I’ve never looked at the cooking app. Nice set-up, and all the recipes I’ve saved over the years!
And I see there are also “games”! I’m intimidated by the crossword puzzles.

I’m intimidated by the crossword puzzles.

The NYT crossword is one of the highlights of my day. I’ve been doing it since I was a kid. Spelling Bee is also fun.

I’m sure I contributed to that CH thread in the past - in fact I think I emailed someone my Tday schedule spreadsheet at one point! Anyway, I do have a pre-Thanksgiving routine, but I am vastly scaling back the meal this year so I haven’t started any prep. Typically I make cranberry sauce, baguettes for stuffing, pie dough and streusel, olive balls (a house favorite appetizer), and the roasted vegetables for my stuffing over the weekend, as well as prepare the protein (i.e. deboning and brining turkey or sealing duck parts for sous vide confit, etc.) and then make stock from all of the meat and veg scraps.

The night before, I make Parker house rolls (to rise overnight in the fridge), start my sous vide if applicable, and bake pies (apple and pumpkin). Everything else (mashed potatoes, gravy, vegetable side, assembly and baking of stuffing and finishing steps on protein and rolls) is done day of. I have a schedule to remind me which oven to heat to what temp at what time, and which dish will use which stove burner. Sounds a bit obsessive but it really makes life easier!

This year I am just doing duck two ways, a veg side, Rösti, gravy and pie, so no real need to organize. I am going to bone out my duck and make stock today, will do everything else day of.

Thank you! Never heard of this before and def want to make it!

I’m only cooking for one, so I can have all my favorites. I started around a month ago. Harvested six Brussels Sprout plants, waiting until after the first few light frosts, but before the first deep frost, so they have the best, sweetest, flavor. (Here in the Catskill Mountains it’s already been down to the teens on several occasions, and we have had four snowstorms already.) I blanched them in boiling water with sodium bicarbonate (makes them stay bright green) for one minute then into an ice bath until chilled. Then I dried them, put in vac bags, froze them, then vac sealed and into my -20F veggie chest freezer. I also have one at same temp. for meats and prepared foods.

Yesterday/Sunday I roasted 8 lbs of turkey thighs on the bone and four turkey wings. Into a four gallon stock pot with a full bunch of celery and half pound of carrots, plus bay leaves and black peppercorns. Simmered for five hours. I de-glazed the fond in the roasting pan with sauvignon blanc and then water, and put into a quart jar in the fridge. This morning/Monday I brought back to a simmer, and then strained. Put broth back into stock pot and boiled down for four hours until it is just starting to taste strong enough for gravy. I removed the fat from the deglazed fond and set aside. I’ll use that, plus butter, to make a nice medium roux.

I’ll put the reduced broth into jars in the fridge to defat, then make the gravy on Wednesday.

On Turkey Day I’ll roast a 12 lb fresh, young turkey, no additives, that I got for free from the market from making the sales points. I’ll oven roast yukon gold potatoes until crispy golden brown, and cook up the brussels sprouts, and carrots that I semi-crisp cooked sous vide in butter several days ago. (My fav use of sous vide.) I’ll also make a coffee poached pear cranberry sauce that I have been making off and on since the 80’s from a Food & Wine mag recipe.

I’ve been working on no knead bread recipes the past two weeks, and I like the latest loaf which is 3/4 unbleached bread flour and 1/4 rye flour. So I will cook up a loaf Wednesday, so it can cool and sit overnight for T-day.

Dessert will be a great commercial vanilla flan, and a tres leches sponge cake. Both are very tasty, by “El Exquisito Sabor” out of Miami, FL.

I have several bottles of high end chmpagne, but except for an Irish coffee in the morning, I don’t plan to drink until the meal is almost ready. With dinner I will have this amazing, intense, very dark rose cava, called Recaredo Brut Nature “Intens” Rosat 2014, that goes great with hearty meals.

I grew up “upstate” but moved away many years ago due to the cold. Unfortunately I only made it as far as NJ.

I have found that epicurious.com has some very good recipes. People also comment about their results, and their impressions and tweaks to improve them. THey also have a star rating system, so the clunkers stand out. If I don’t have a known recipe, I use that as a starting point.

I think everyone is over here…

Forgive me if this duplicates. For those of us who remain hunkered down in the pandemic and are beginning to consider Thanksgiving for two or three or similar small numbers instead of twenty what are you thoughts? How much food? How many dishes? How much leftovers? Give context. Movies? Breakfast in bed? Naps? Candles? Fireplaces? Video calls with friends and family? Coordinated menu planning? For those of us who continue to be careful about CV-19 transmission risk what are you going to do? H…

But i might stick my blow-by-blow pictures on this thread.

Here are a few… 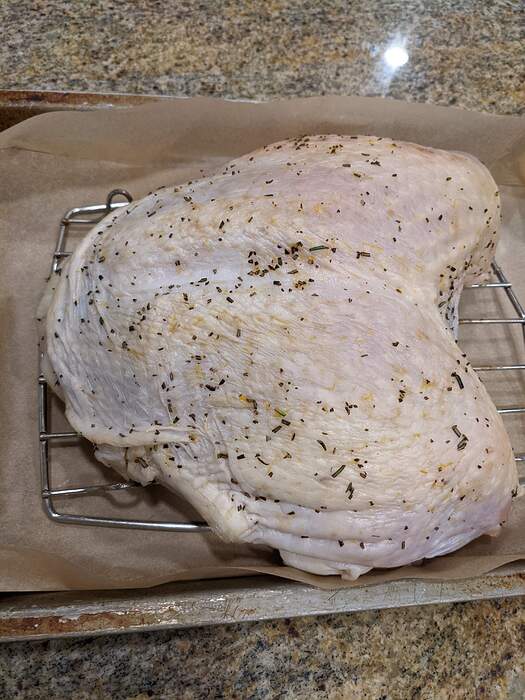 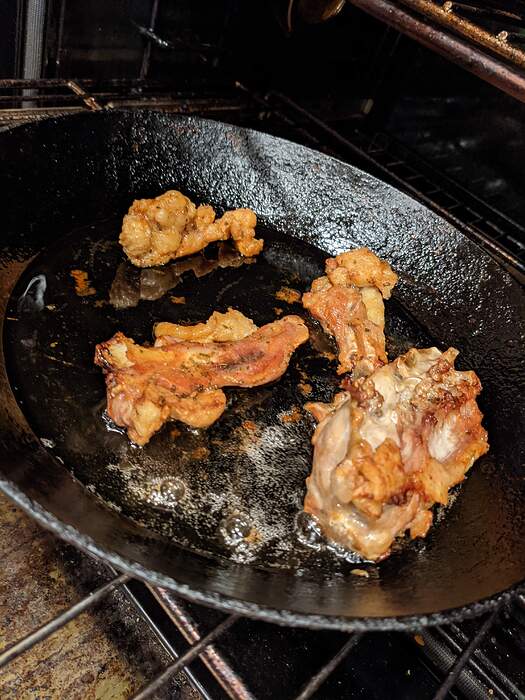 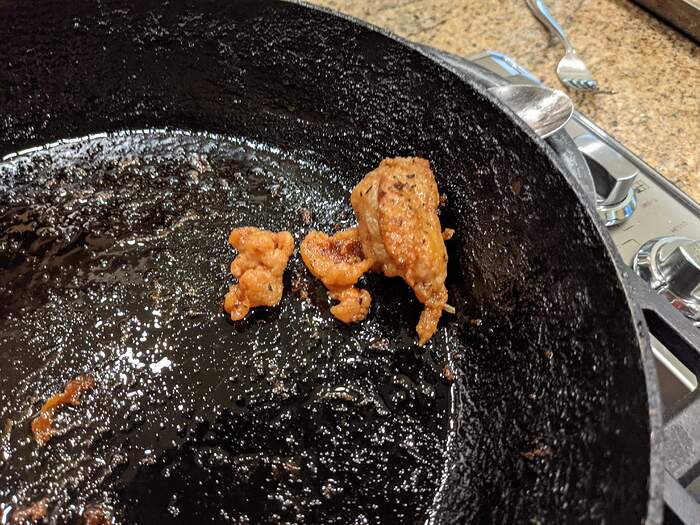 And added bones and drippings to the stock I made with roasted wings last week. 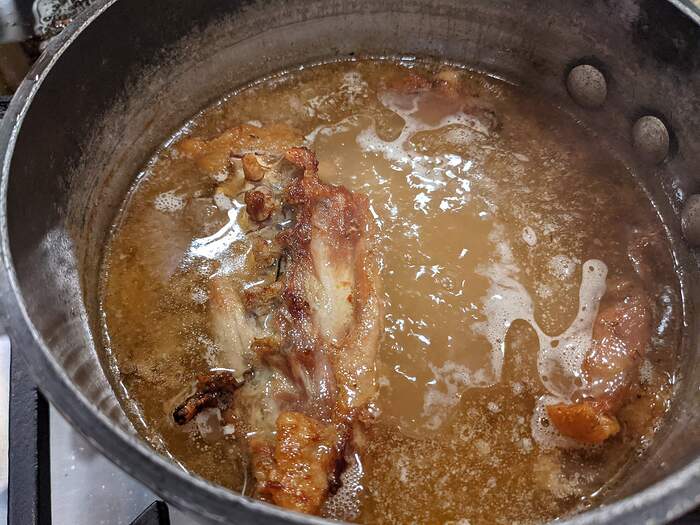 For peas and rice

A side order of peas & rice (or rather, Peas n’ Rice) is as part of any bona fide Bahamian meal as palm trees are to our beautiful island landscape. Served alongside fish, meat or chicken, this beloved staple food is thoroughly enjoyed by... 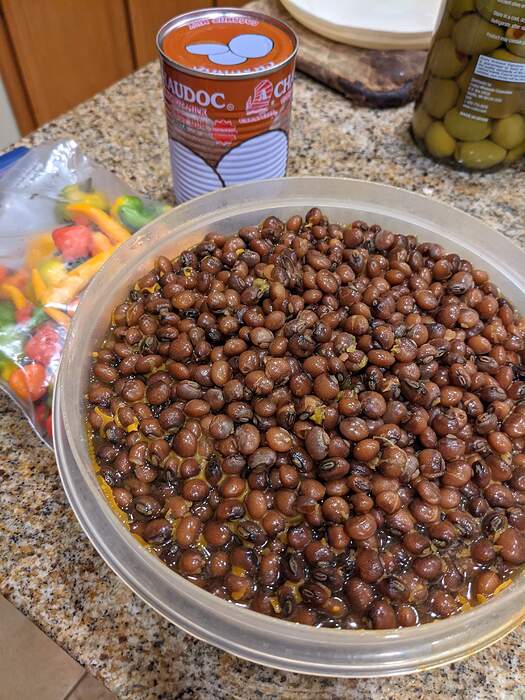 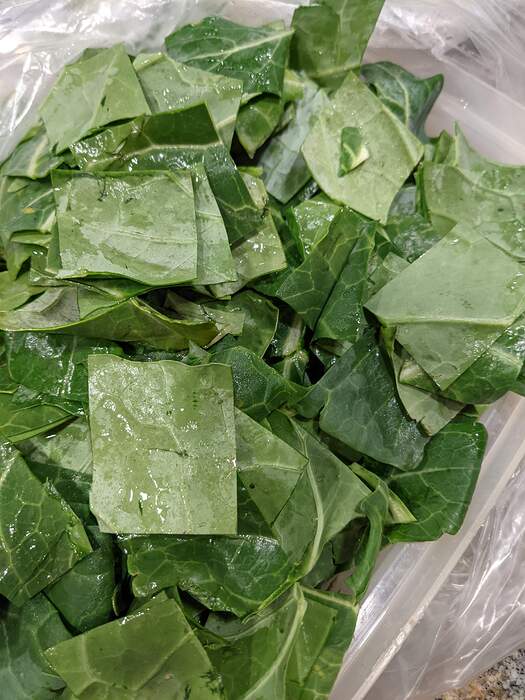 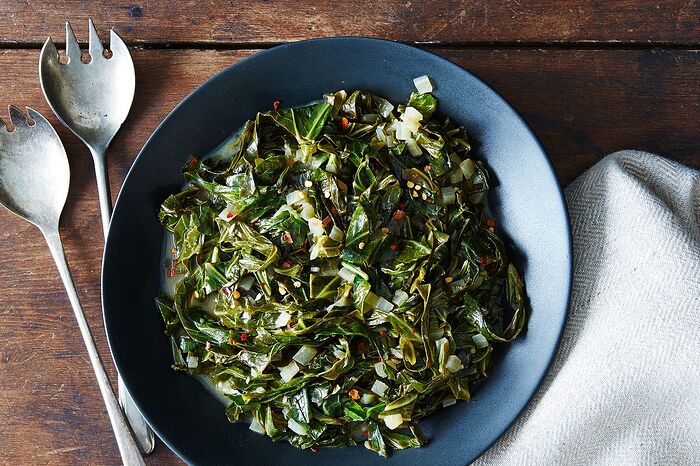 Meet your new favorite way to eat collards. This recipe yields collards that are tender, creamy, and incredibly flavorful. They're a perfect accompaniment to a simple beans and rice dinner or a bowl of chili. Add more chili flakes for a little extra... 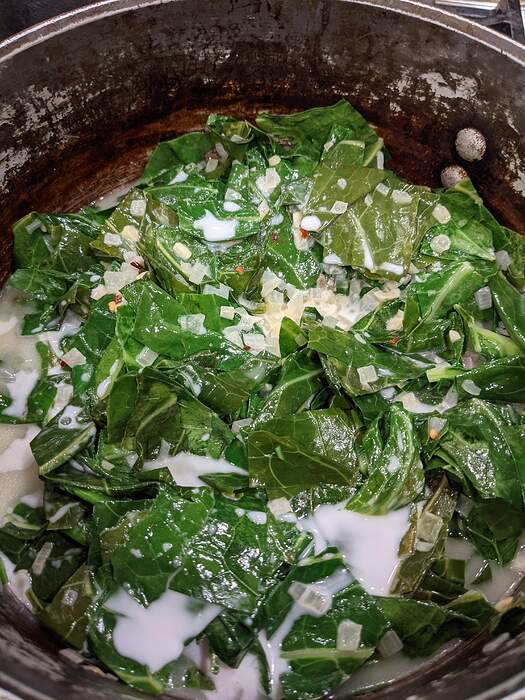 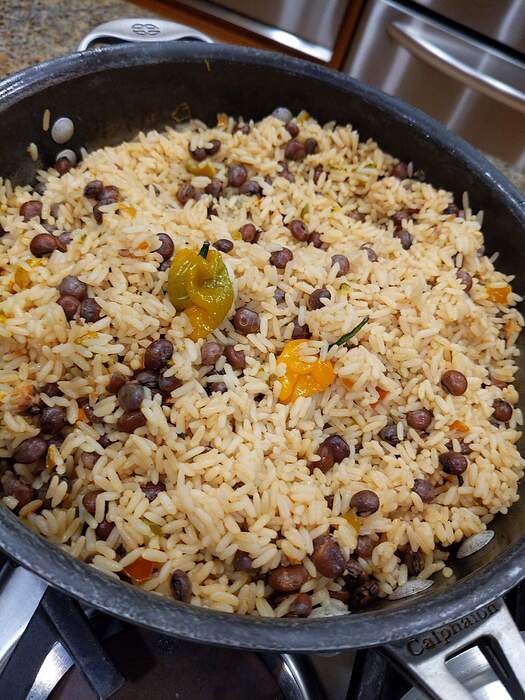 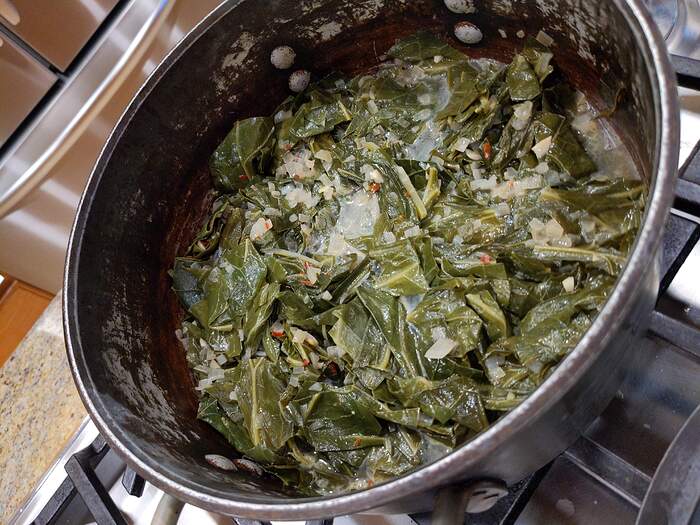 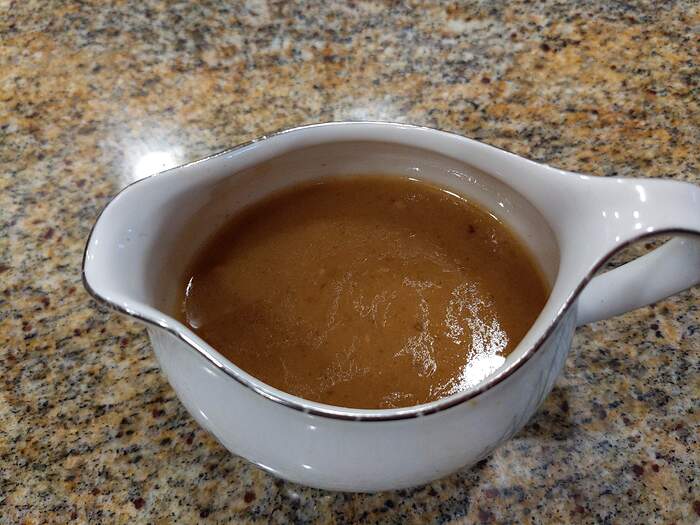 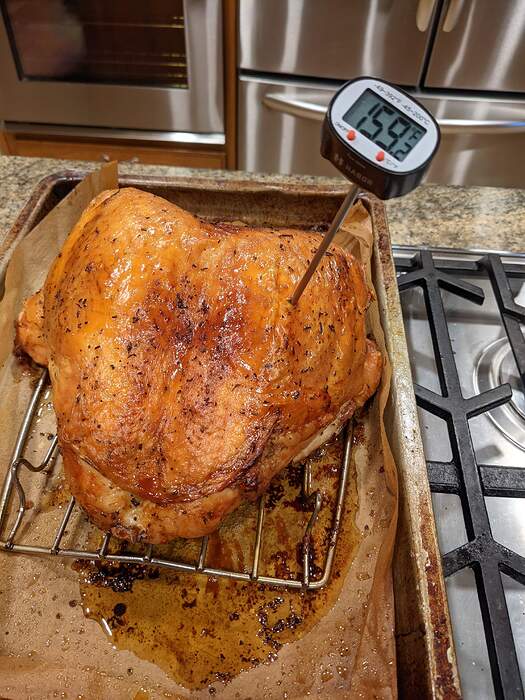 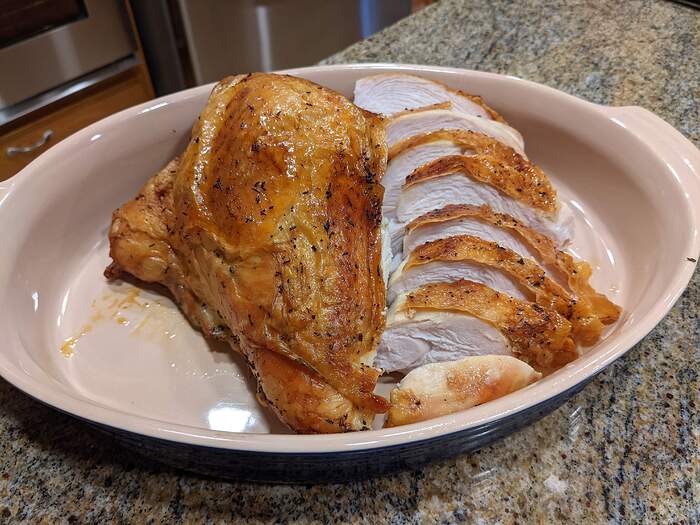 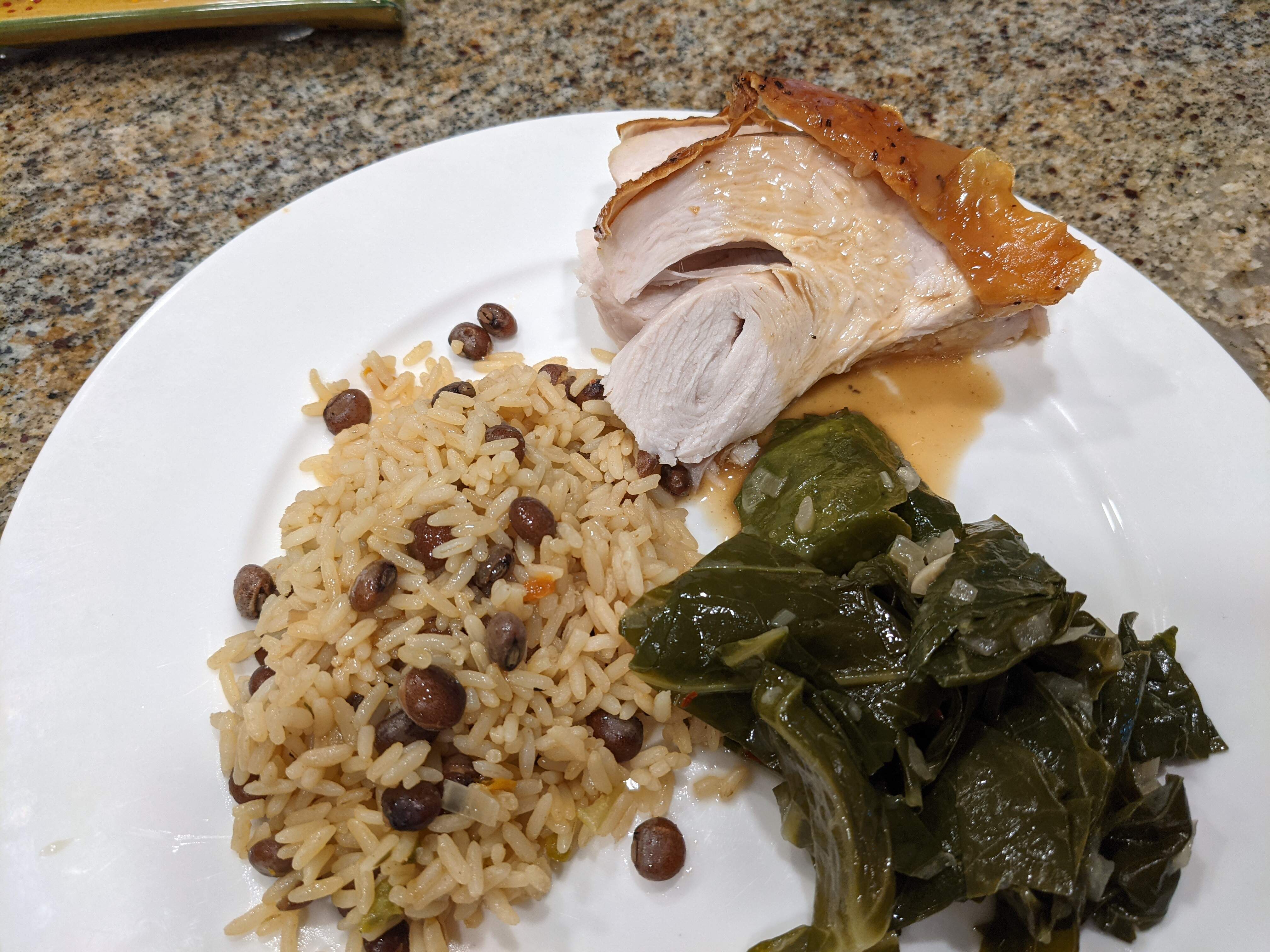 Stick a fork in me…I’m done!

And I’m physically incapable of cooking for one. Which means I have TONS of leftovers. 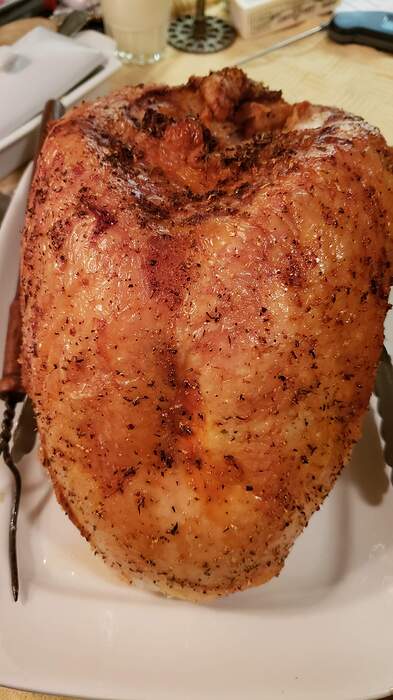 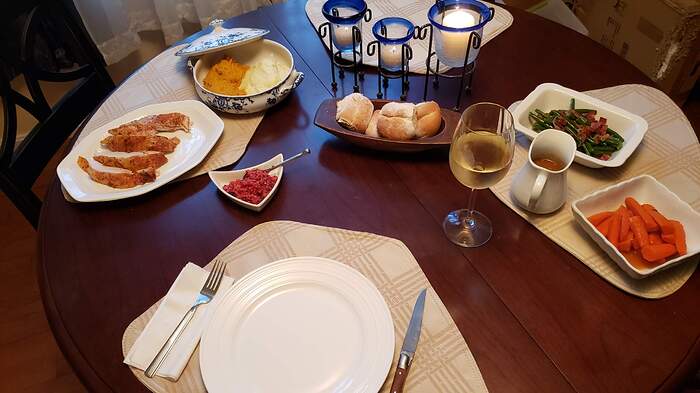 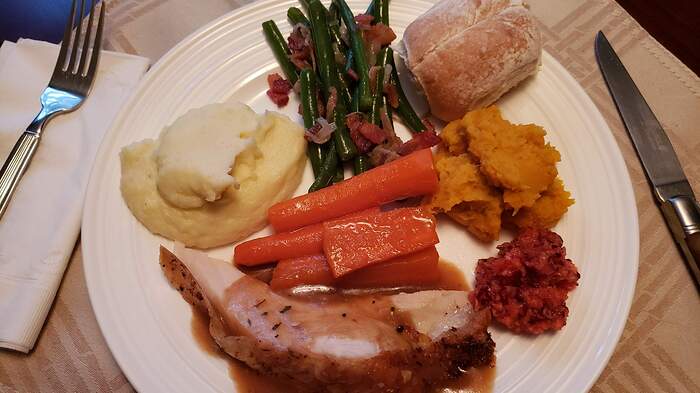 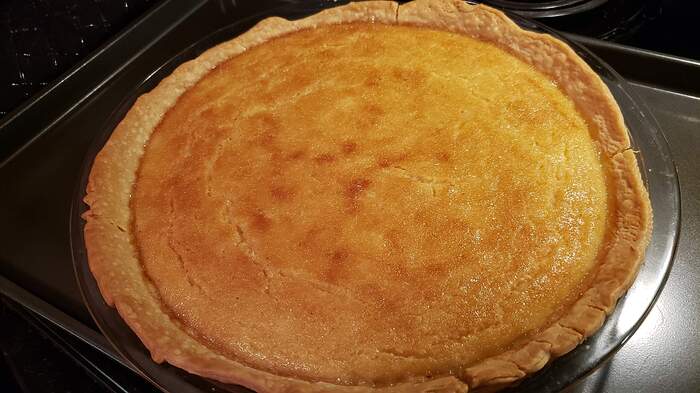 And I’m physically incapable of cooking for one.

Isn’t it crazy? Looking forward to you sharing your leftover meals.

Turkey thighs about to go into the oven for a low and slow braise. 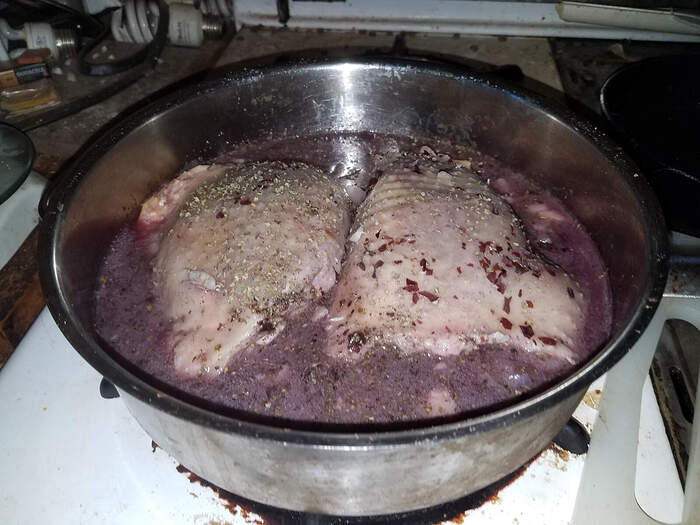 The red wine will darken as it cooks. I used half Opporto dry red wine, half chicken stock. The red flecks are actually green, dulse (sea moss) flakes I like to add for umami.

And I’m physically incapable of cooking for one.

Isn’t it crazy? Looking forward to you sharing your leftover meals.

Half a turkey breast has been frozen already. I’m expecting turkey chili and turkey pot pie or turkey shepherd’s pie will be two of the repurposed meals I make.

Don’t forget turkey tetrazzini. It’s my once a year treat after Thanksgiving.

My Mom always made that for family. I’d have to severely downsize the recipe I have, as I remember it always made a lot!

Everyone is so ambitious! For the two of us I sprinkled a half turkey breast and two drumsticks with garlic powder and roasted them for an hour with two potatoes. I made stove-top stuffing with raisins, and Brussels sprouts (frozen), along with canned gravy and canned cranberry sauce. And a Shoprite pecan pie and a bottle of sparkling grape juice. It’s not gourmet, but it was pretty good and did not leave me exhausted. (And there’s still a lot of turkey left.)

(Now, Passover, that’s exhausting, but that’s more because of all the dietary restrictions and extra items like charoses.)

I don’t begrudge anyone their “joy of cooking”, but it is possible to have a traditional meal without spending more time than one wants. In other words, expediting.

I wondered if expedite was the right word, since from the cooking competitions it seemed to include barking orders at others, which is not what I had in mind. But I like the idea. Sometimes I yell “behind!” in my kitchen.