I wanted to pass along what I felt was an amazing value for an end-grain cutting board. I found one of these at my local Marshall’s about 3 months ago and bought it for a friend. I liked it so much that I decided to buy one for myself if I ever saw another (and I just did).

The manufacturer is JMN Ent. in Canada. Their website says they make most of their products from Canadian hardwood mill scrap, which would explain why the segments are relatively small, and it looks like they use mostly maple and white birch pieces for these boards. The size is a very practical 15"x10"x1-1/4". The price, an amazingly low USD $20. For comparison, I’ve been using a Boos 16"x10"x1" edge grain cutting board for the past few years. It costs 2x-3x as much ($46-60 right now) and the segments on mine starting separating after less than a year of use. 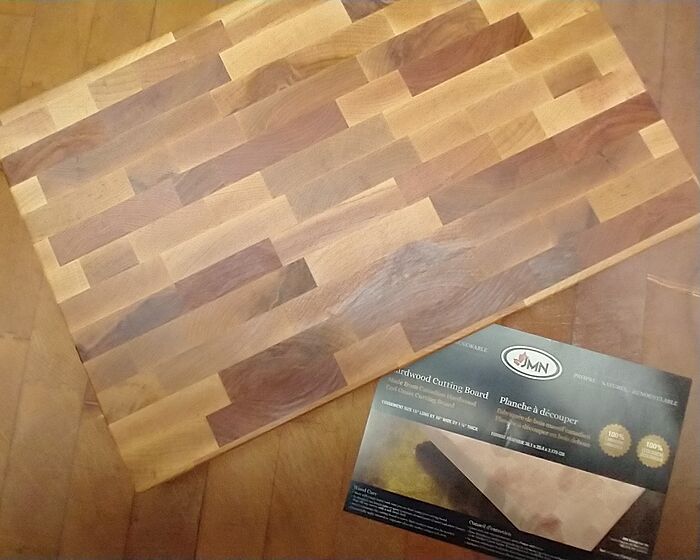 My next errand is to get to the hardware store to buy some rubber feet.
Upgrade your cutting board

that does not appear to be an end grain construction.
their web site says edge grain.

This is DEFINITELY and end-grain board.

Look at their website a little more thoroughly. Most of what they offer are edge/side/face grain, but 3rd row down, far right side (on a desktop w/monitor) is a pic of the end-grain boards with this description:

The only difference to mine is the lack of legs, but I can fix that.

$20 for end grain hardwood is very inexpensive. How long have you able to use yours?

That’s about the same size as my poly board–a little bit LESS expensive.

I haven’t made the trip to the hardware store to get feet for it yet, so right now I’m still using my 10"x16"x1" Boos cutting board for anything I don’t want to cut on the chopping block. I’ve put a little mineral oil on it and noticed that it’s heavier than the Boos board.

I know! When I found the first one I thought maybe they had mis-priced it.

As in your muscles?

I believe this is the cutting board I picked up a month or so ago at a TJ Maxx. I haven’t seen it since. I wish it was longer and a little wider, though, I prefer a 12 x 18" as that’s the max I can fit in my cupboard but it does well enough. It seems kind of fuzzy feeling, though, but my husband says that’s what you get with an end grain and it will never be smooth like regular wooden cutting boards. I’m not putting feet on mine because I have to store it.

To celebrate my birthday last month, Dr. H, my Japanese co0llaborator furthered my education by giving me a small Hinoki cutting board. It was not a cutting board I would have considered by myself–even if it is specially recommended by Shun. It was thin, and required one to wet it before use, but it was a birthday present. I tried it, and it was pretty good for making salads, so it wasn’t a complete disaster.

The next day, I discovered the real purpose for the Hinoki. It had produced a subtle smell that freshened my entire workplace.

“Yes,” my friend said, "that’s why a hinoki board is part of so many home kitchens in Japan: 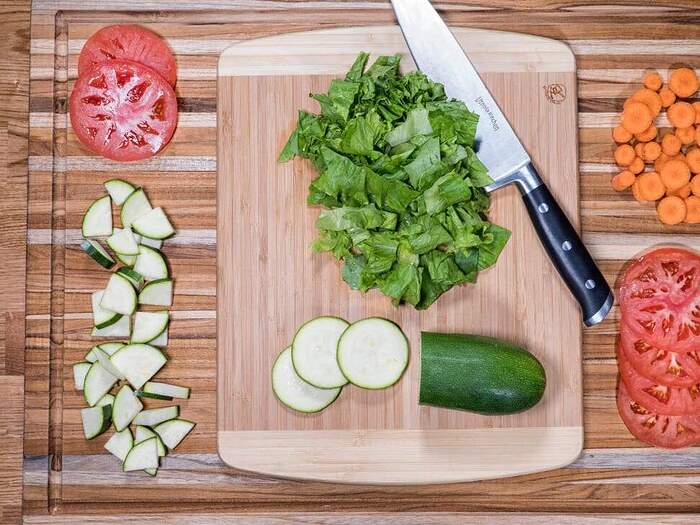 When I heard he got it at Marshall’s, I immediately wondered if the might not have them at TJ Maxx. I might make the trip to see. I’ll pray on the way.

my first, and most recent wooden boards were both given to me–and they both taught me something.

The first, a round one with little feet, is a perfect sandwich board, made of beech wood–and it’s been around for more than 30 years. Until I used it, I didn’t realize I even needed a sandwich board.

The one I just got as a gift, the hinoki, I thought was a gimmick when I saw it on the Shun website.

When I wetted it down for a light vegetable prep–it felt good–even before I noticed the subtle fragrance that has spread throughout my kitchen.

It was a great gift.

When I heard he got it at Marshall’s, I immediately wondered if the might not have them at TJ Maxx. I might make the trip to see. I’ll pray on the way.

I’d be careful with HomeSense, Marshalls etc.
I did find a beautiful large cutting board there and when I brought it up to the cash there was a hairline crack through a small portion of the board.
I checked the other 2 on the shelf the same thing.
I did find one at another store without any cracks and in darker wood which I prefer.

I’m currently working on a custom santoku with a zebrawood handle. It’s my first use of S35VN steel. So far I like it, but dang, it’s expensive compared to the D2 I’ve been using!

I have a Boardsmith endgrain cutting board and a Boos endgrain butcher’s block. Neither of them have a fuzzy feeling. I finally picked up some feet for my JMN board, so I still haven’t used it yet. I guess that’s the problem with having an excess of cutting boards?!?

What are you using for board conditioner?

Yes, I’ve found the same thing at all of the TJX stores around me. I always thought it was because the boards didn’t like being shipped from whatever humid climate they were made in, to semi-arid Colorado. But maybe it’s something else? (I don’t know where you are or what your local climate is like.) These JMN boards appear better made than a lot of the boards I see at the TJX stores. Even the Boos face grain cutting board I got there developed small end-separations within the 1st year of use!

These looked like good quality boards from Italy.
Personally, I believe that perhaps they were mishandled by the employees because the boards are so heavy.
The employees are often re-merchandising the store so they may have been a little too rough with them.
Two other stores that I visited had no issue with the Italian boards.
The weather can also be quite humid here.

wondered if they might not have them at TJ Maxx.

Same guy as Marshalls, although that of course doesn’t guarantee same store set.

The thickness, coupled with the fact that early-on, I over oiled them, make them so heavy that there’s no need for feet/no worries about slippage against granite. I mostly use these big guys for carving turkey or large roasts, or cutting large pizzas.

I’ve got one that looks exactly like that, except no name branded on it so it’s just a cheap knock-off. But still I’ve been using it daily for 20+ years and it’s held up well. About 14" x 11" x 3/4", so it’s big enough for most of my daily veg chopping. I originally marked one side as “ONION” (which my sister, reading from the wrong end, said of, “What NOINO supposed to mean?”) with the intent on keeping one side useful for fruits, but eventually the whole thing saturated with onion and garlic odors.