Good good good! Now I just found this thing in my garage. I don’t know why I bought it nor did I ever use it. 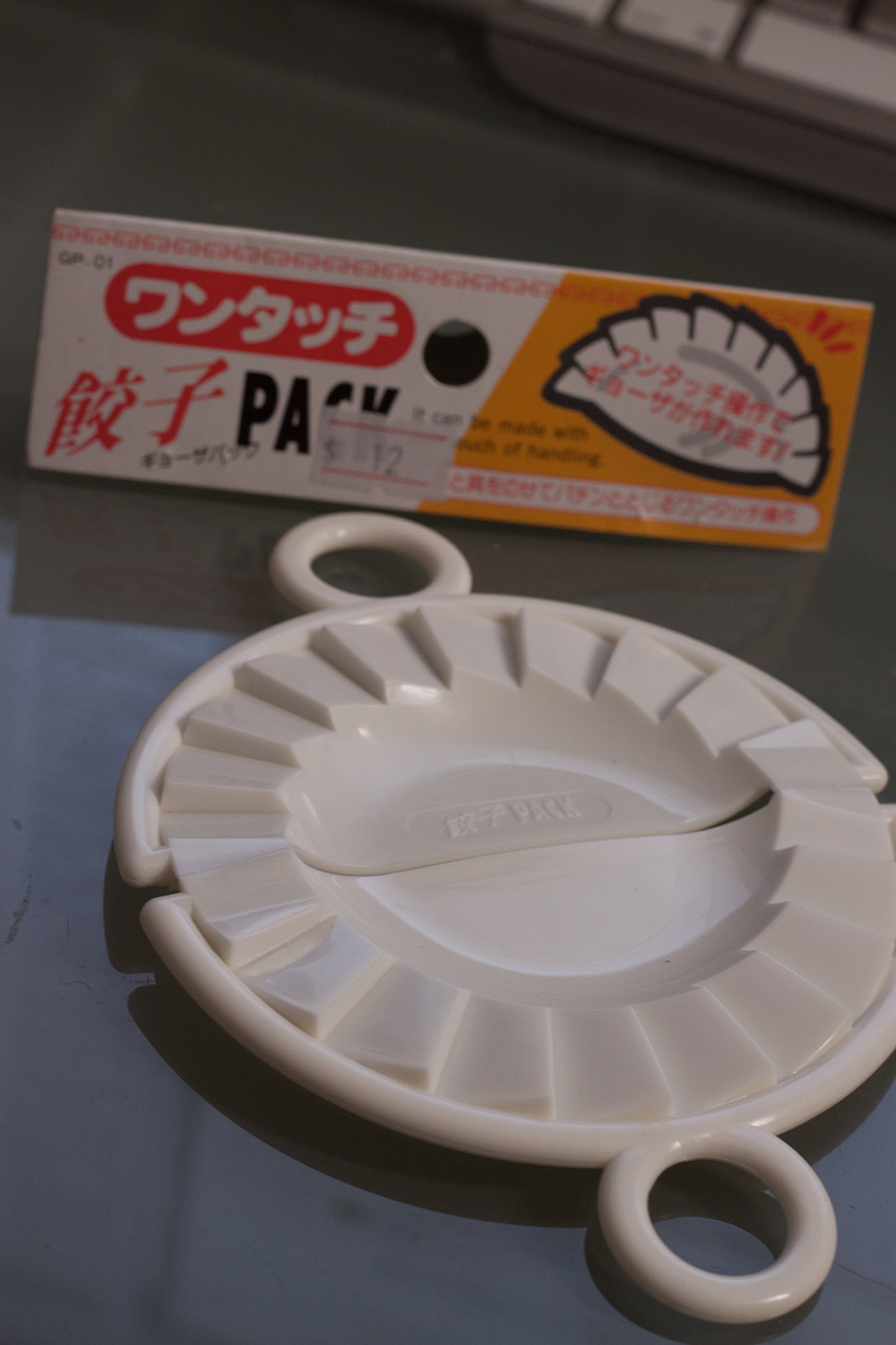 Making the wrappers is easy. Just jump in

I think I will jump in starting next weekend, this week will be a lot of overtime work…

How should we proceed? Take a lot of photos in each steps? and photos of the final dish? I’ve never participated in the CH dish of the month… Or we can rather do it in the Hungry Onion style? “Free style” until we find a style?

Just curious, do we need a moderator like in CH?

Will jump in with you, but not today*. Gonna try something new to me having looked at the list of most dumplings around the world.

Those who want to make Chinese dumplings do have a look at some mouthwatering dumplings I had in China. (Video clip has sound)

*The weather yesterday ruined everything, shopping plans fell though. Such horrendous stormy, miserable, disgusting day it was.

I think freestyle is best. Not everyone is able to photograph and upload. The only “rule” on Chowhound DOTM was not to copy a recipe verbatim. Links to recipes were encouraged as were details on the process and any substitutions made, sharing what worked and what didn’t work.

The coordinators role was:

They initiate nominations, format the voting and start the thread for the months winner. They answer questions, try to keep things on topic and often provide extra info (links, trivia, etc.) to provide inspiration for those who need it. Ex: DOTM Souffles - I provided a link for a video of Judith Jones demonstrating a souffle for one. This seemed to open the idea up for several cooks who had thought a souffle would be too much food for their use.

I may be in the minority but a whole lot of photos do nothing for me. The finished result, for me. YMMV.

Inspired by this post I gave pierogies a go last night. I used a recipe from an old Ukrainian community cookbook. I halved it and it was 1 egg, 1 T butter, 1 c. lukewarm water. And 2 1/2 cup flour. I made them with a potato onion filling.

The process: I had a really hard time getting the dough to not be sticky. I kept adding flour and I would say it took a lot more than the recipe called for. I’m pretty sure I overworked the dough a little bit in my quest to get it to rolling consistency.

Also, I have a tiny apartment kitchen and I quickly realized this was a big kitchen project needing much more counter space than I have available.

Overall, I’m happy I made the effort but found the end results to be kind of meh. I think it’s one of those things that is deceptively simple and will probably just take some time to master.

On the upside, the beer boiled brats I served with it turned out great thanks to an old CH post from @Sunshine842 who suggested adding corned beef spices to the beer mixture.

Glad it worked for you! That’s not a traditional thing, by the way – I started doing it a few years ago, and the Wisconsin in-laws started raving about my brats…so now they do it, too!

Tonight’s dinner was a greens from the garden filled ravioli with a walnut sauce. The greens were mainly silverbeet (chard) mixed with basil and marjoram. An onion was finely diced and cooked till sweet to mix in with the chard. I considered making ricotta to go into the filling them decided I felt like something rich in greens.

The walnut sauce was from this recipe: http://www.williams-sonoma.com/m/recipe/wild-greens-filled-ravioli-with-walnut-sauce.html

The pasta was my standard 1 egg to 100 grams of flour. 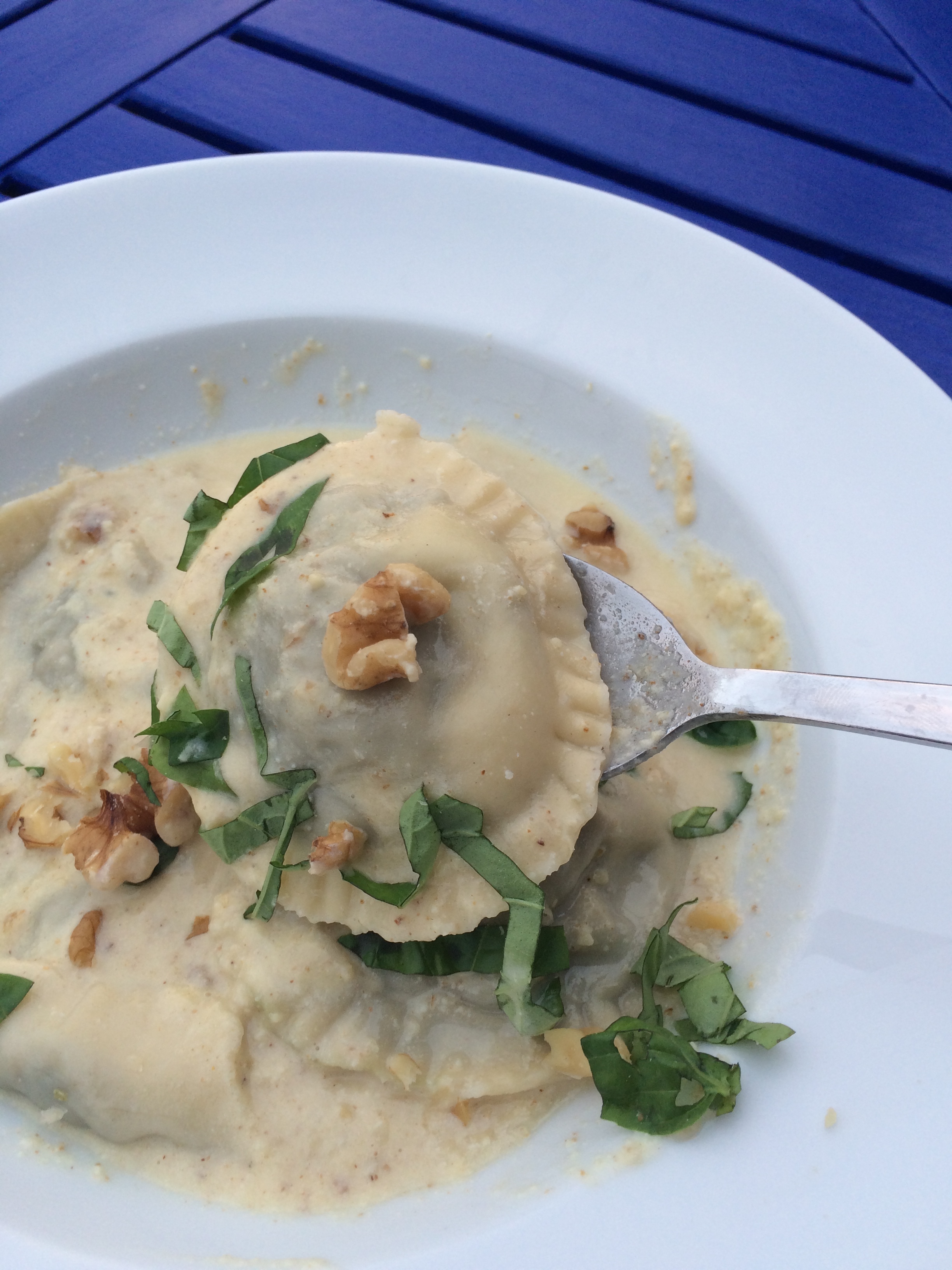 The shaping was a bit rough, I just use a small ramekin as a stencil. I did have one of those press things once but found them to be hopeless so binned it.

My second lunch. First was bread and cheese. 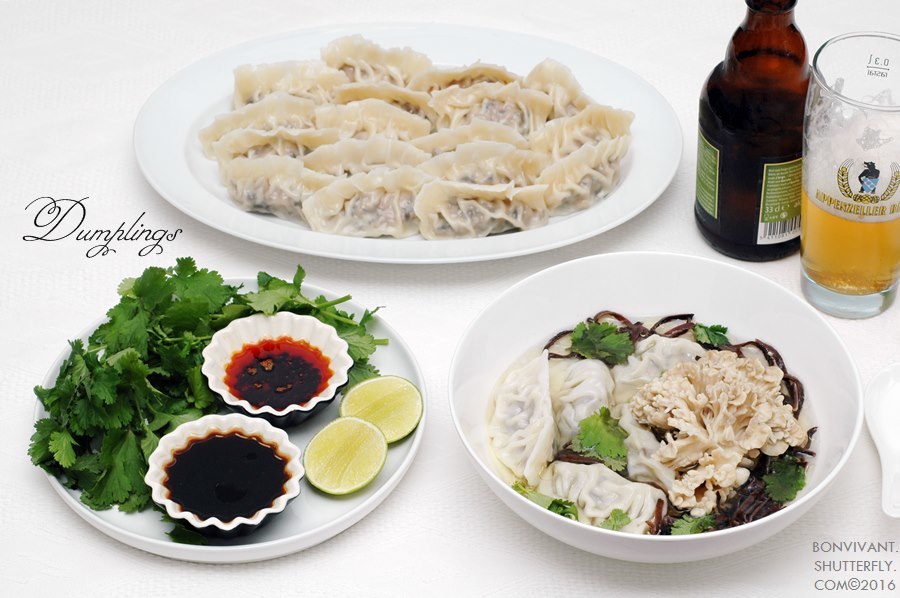 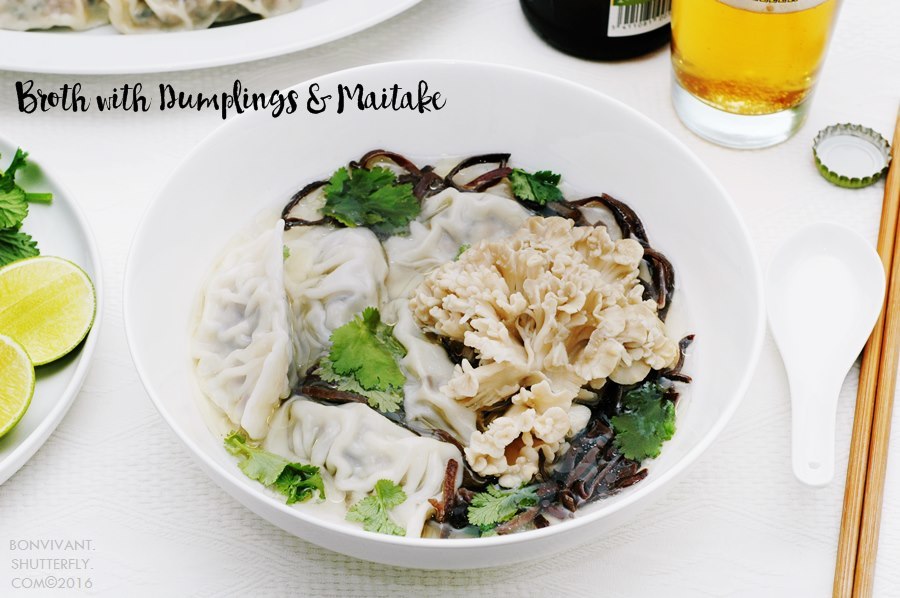 My unprofessional/lousy pleating skills are mine and mine alone. 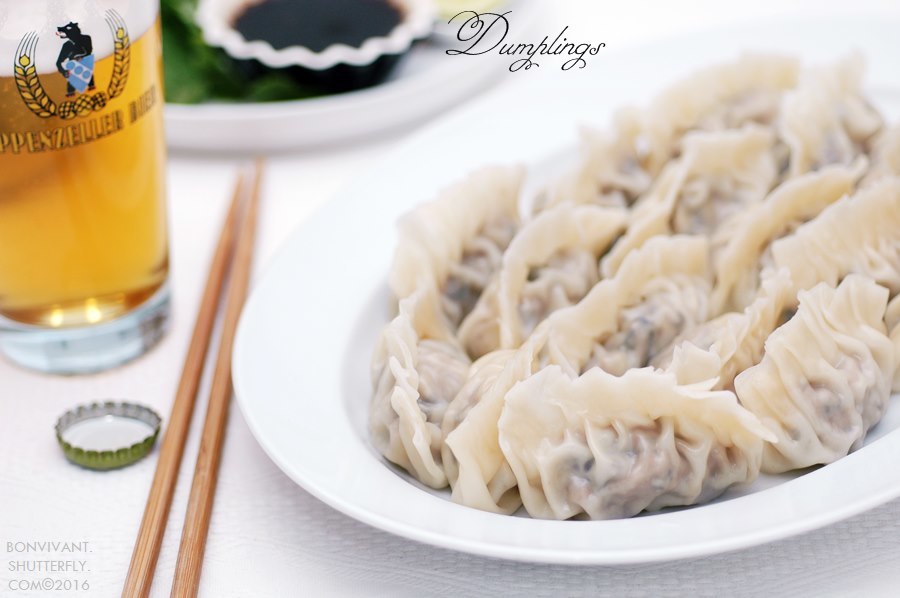 The swede makes the dumplings nice and subtly sweet. Loved it. 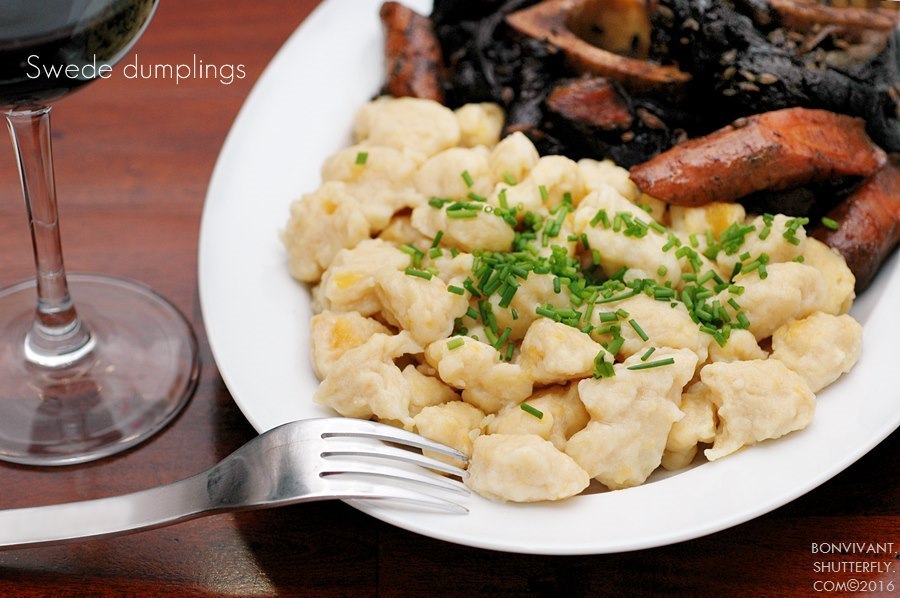 My unprofessional/lousy pleating skills are mine and mine alone.

Actually I find them quite cute, especially the skin seems pretty thin! Do you do the sheets yourself?

As for the swedish dumplings, what was the filling?

An onion was finely diced and cooked till sweet to mix in with the chard. I considered making ricotta to go into the filling them decided I felt like something rich in greens.

Refreshing with the greens. Usually I find the recipes with cheese fillings but I think it’s a better idea with a cheese sauce. Lovely dish!

So I guess I’ll jump in here from the What’s for Dinner thread at naf’s suggestion. Valentine’s dinner was hand-formed ravioli with a simple marinara sauce. The ravioli filling is based on a recipe that I copied from Yankee Magazine well over 30 years ago. I add a bit more salt and skip the parsley, but otherwise keep it pretty much the same. The little bit of garlic (I’ve tried adding more and it is overpowering) really adds a wonderful savory note. The pasta is a standard egg pasta recipe. I’m always tempted to try a ravioli press, but most of them seem to cut off every bit of surrounding pasta and I like a little on the edges. This is a simple dish, but one of our favorite meals.

Little cases of dough containing a savory filling – this is the definition given by Webster’s Dictionary. But Marguerite Dimino defines ravioli as “the one Italian food that everyone loves.” 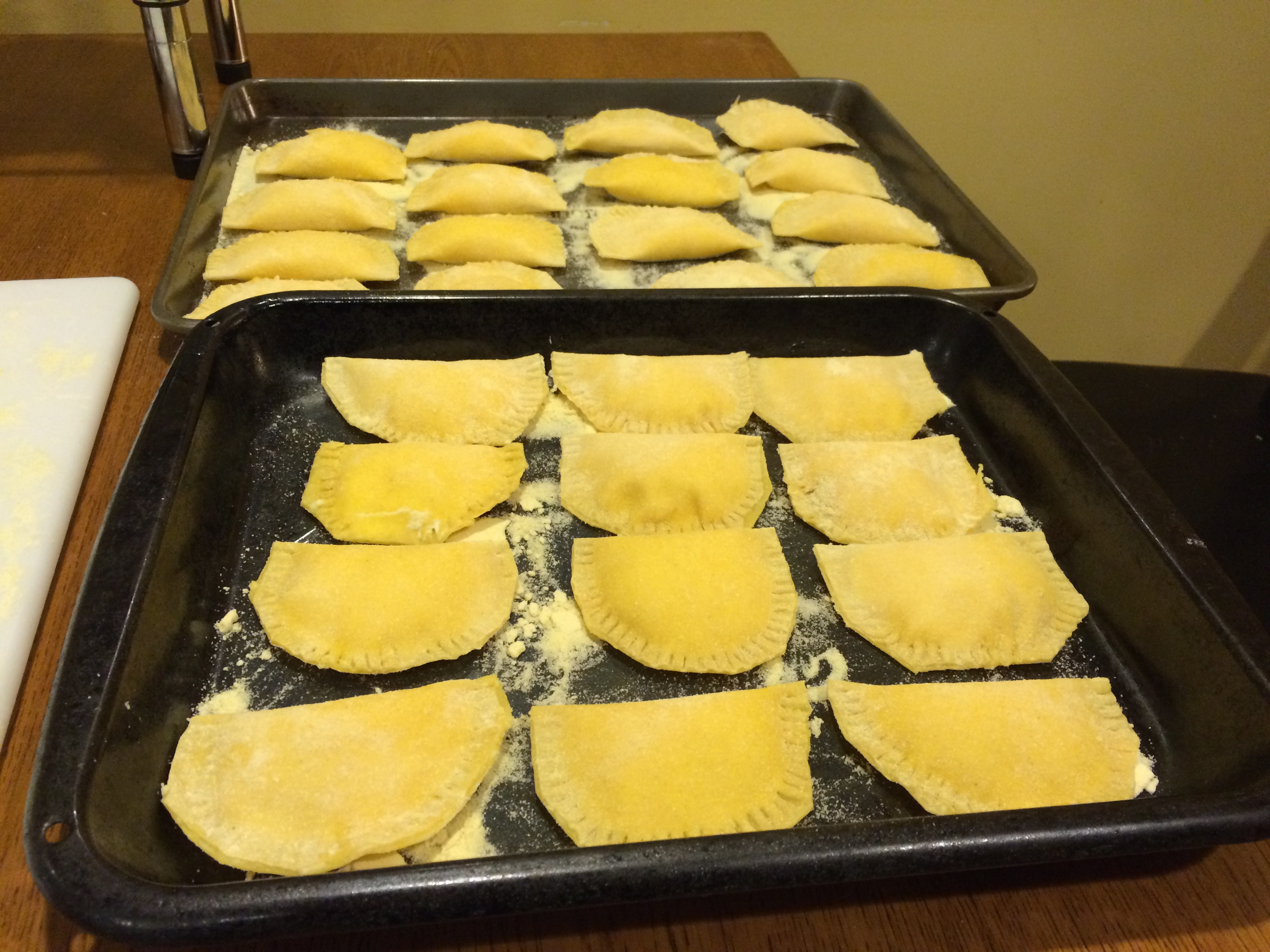 Actually I find them quite cute, especially the skin seems pretty thin! Do you do the sheets yourself?

As for the swedish dumplings, what was the filling?

No, I always buy dumpling skin. I know it’s not that hard to make but it’s something I haven’t thought of giving it a go yet.

There is no filling for the swede dumplings. There were equal amounts of swede and floury potatoes in the dumpling mix, which I mashed using a fork. The yellow bits are coarse swede as a result of mashing with a fork (I don’t have a real masher). The root veg makes the dumplings subtly sweet.

Read more about this root veg here. Also in French but not as thorough.

I also use a fork to close the sheet. Easiest and guaranteed to stay closed.

We have swede in North America – but we call them rutabagas.

Read more about this root veg here. Also in French

Same as Sunshine, here we called them rutabaga too.