Did I cook last night?

This is an interesting topic to me. Last night I made dinner, it consisted of Ikea meatballs (frozen with powdered sauce), perogies (Mrs. T frozen) and baked beans (bushes canned). I frequently “make” meals like this, but I truthfully don’t consider it “cooking”.

For me cooking means taking raw ingredients and using them in a matter where you are “creating” the dish, not simply heating up ingredients. Outside of chopping and sautéing some onions all I really did was “heat-up” some things, not saying it isn’t cooking, but to me…meh…I cheated. lol

So, what is your definition of actually cooking? Did I cook dinner last night? 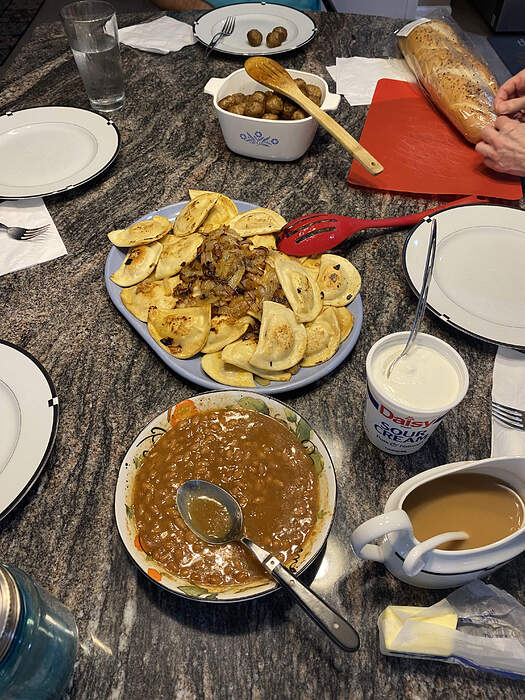 Anything that requires me to move is cooking.

I’d say you cooked. You did onions, and probably seasoned as well. It is not like you put a frozen dinner in the microwave.

There were a lot of things I used to do from scratch (BBQ sauce, mayo, beans, most breads, even pickles) that I rarely do anymore as I have discovered really good store bought replacements. I guess it all depends on where you draw the line.

all I really did was “heat-up” some things

If cooking vessels were dirtied (and thus needed cleaning,) that counts as cooking in my book!

Your pierogis are neither uncooked nor burned. I’d say that part at least is akin to cooking; the onions too.

I confess that I have similar thoughts some nights, like when I grab a “bag salad”, a loaf of “Take-n-Bake” (warm in oven) Aldi bread, boil some dried pasta and heat jarred Mids or Bertolli or Barilla sauce. I don’t feel guilty about it, I mean some nights you just gotta get stuff done, but I do sometimes think “Did I cook last night?” [1]

Years ago one of my well-meaning aunts gifted me a year’s subscription to some cooking mag that was mainly Midwestern fare. No offense intended (I grew up there/eating that and all of my relatives still live in the same area) but so many of the recipes in this magazine (most reader-contributed) consisted entirely or nearly so of:

Is that cooking? I’m not sure. OTOH, in the case of the “open cans of this & that” recipe, I guess I’m just permitting Campbells etc. to be my middleman.

[1] On first reading your thread title I was scared this was going to be a blackout story!

I still make bread and ferment pickles fairly often but gave up the homemade mayo (my son prefers Dukes or Hellman) and also gave up making homemade pasta sauce most of the time.

If you have any secrets on fermenting pickles to fix this problem, please let me know. About 1 in 5 batches turns to inedible mush. Same ingredients/process (and I do trim off the enzymatic end and add bay leaves) but repeatedly I get one jar that’s just mush, and the other 4 or 5 will be great. Yuck.

[1] On first reading your thread title I was scared this was going to be a blackout story!

You have to buy me a drink first to hear those stories!! Then after you buy me a drink the chances increase significantly of you actually witnessing me blacking out!! (bonus!!)

(FYI the last time I recall actually passing out from drinking was in Atlantic City. I was on an all night binge, drinking/gambling when I was at a roulette table at say…3:30/4am - I was grossly intoxicated and at one point I passed out. Completely blacked out and “fainted” forward across the roulette table. The “WHAM” of hitting face first on a roulette table quickly snapped me back into consciousness where I stood up, with a casino chip literally stuck to my forehead, asking the dealer…“Hey what number came out?”. " True story)

To me, cooking is putting some heat to ingredients so that something to eat appears at the end of the process.

Making a ham sandwich for dinner is not cooking. You put heat to the ingredients so that’s cooking to my mind. By the by, what are perigees, please?

By the by, many of the items that go into a Middle Eastern mezze dinner at Casa Harters involve little more than opening a jar or a supermarket ready prepped salad.

Fun question. Another vote for “cooking.”

You did more than (re)heat. Ingredients—the onions—were transformed by chopping and sautéing. As long as there’s at least some transformation and/or processing of raw ingredients to prepare a dish, I say that counts.

To me, cooking is putting some heat to ingredients so that something appears at the end of the process.

By the by, what are perigees, please?

Polish raviolis? Similar pasta stuffed with potatoes. (when frozen you boil to thaw then pan fry with onions)

By the by, what are perigees, please?

My daughters and I have made this pierogi recipe and thought it was really good. Except in the potato filling mix we only made 1/2 of them cheesy as suggested, and the other half had sautéed onion, garlic and a bit of crumbled up bacon we’d cooked a few days before. 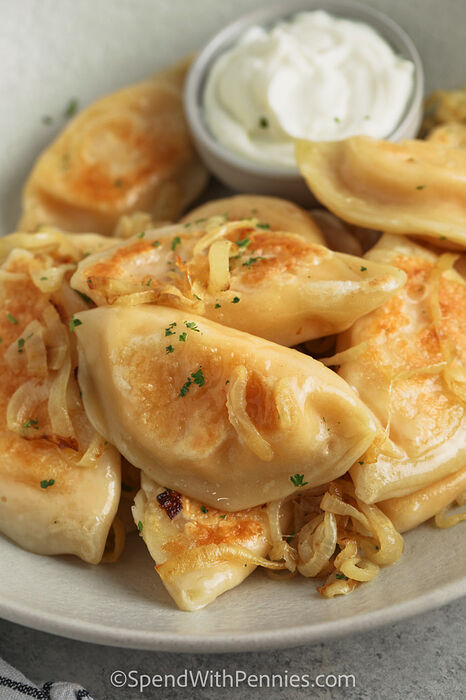 Open cans of this & that, mix them together in a casserole dish, sprinkle bread crumbs and Kraft grated parmesan atop, bake.

Cans: tomatoes (as fresh are not worth a damn up here), most beans (except pintos/black for refried, and garbanzo for falafel and hummus), beets (what a mess doing them yourself), some soups (mostly Progresso), chiles in adobo sauce, etc.

Kraft grated parmesan: while I will always use real parm for pasta/dressings/scampi, etc., my favorite garlic bread recipe (which includes sourdough, butter, a minced garlic/mayo/paprika dressing) is best topped with this as real parm melts and ruins the crispy texture I want (plus it is all about the garlic and not the parm).

I don’t. Favs include Clausen for dill, and Tony Packo’s for sweet.

For me it depends on how many of the ingredients are “raw” or “home-made” vs how many are just store bought and just need to be reheated. There is no clear-cut number but in your specific case I wouldn’t call it cooking as it contains nearly only store bought stuff which was mainly reheated

I also buy mine frozen from the Polish grocers a couple of miles away.

You got a good gazpacho recipe?

It was a genuine question. Whilst they looked like pierogis, I thought maybe you Yanks had perigees as well.

What’s the ONE recipe of yours we have to try?

I consider this assembly cooking.
It still is using spices, herbs, garlic onions etc.
So it is doctoring something up that is already prepared or boiling pasta and opening jared sauce and assembling them together.
It’s a little different than traditional cooking which would be cooking raw ingredients and simmering over a low heat to have the flavours meld together.

Yes, @NotJrvedivici you cooked. Anything that requires more than taking something out of the package and putting it directly onto the plate (such as a cold sandwich or a pre-made microwavable meal) is cooking.

We HO’s are spoiled because we mostly all know how to cook, and cook very well at that. But I think we overestimate the skills of the average person. There are simply a lot of people out there who have no abilities in the kitchen whatsoever-- the “burn water” types.

Even such mundane tasks as heating frozen pierogies (whether you added sautéed onions or not) and mixing a powdered gravy is a “lot” for some people. Believe me, as you know I work in food service and we have people in our establishment EVERY. SINGLE. DAY. Sometimes for lunch AND dinner. That doesn’t tell me our product is just that amazing, it says they don’t know how to cook!