I saw a billboard that a Cuzin’s is opening in Marlboro on Rte 79? Anyone know anything about it?
is this something to be excited about?

It doesn’t appear to be a chain. I’ll think about being excited – or not – when the website includes a menu with prices.

I’m punting this one upwards again… had wanted to go this evening, but can’t get reservations - for a Saturday night, only 2 weeks ahead at a reasonable dinner time.
Anyone go? Anyone have any opinions on this place?

(so alternative tonight is Ganga on 34 - any strong opinions on this one?)

We go to Ganga for lunch occasionally. We’re not big gourmets, but I like that they have Eel Kabayaki for lunch and Mark likes that there is a Chirashi Lunch. Basically that is what we get every time. The hot and sour soup that comes with it is good. We both recommend avoiding the Thai food, which is totally non-descript (at least the lunches). We go to Wasabi 34 up the road more often for Sushi Lunch (me) and Higashi Bento (Mark). We hardly ever go to Mahzu.

(We are creatures of habit.

Thanks for the response.
Went on Saturday night - very busy, loud, but tasty.
Sushi/Sashimi with some extra eel was fresh and good. (was tempted to get the sea urchin but wife pushed back not to - maybe next time). She took the sesame crusted white tuna - not what either one of us had been expecting, but good nevertheless.
Agree with avoiding Thai at a non-Thai place.
Overall good, but loud.

White tuna…yikes. do you have any pics of this? I’m wondering if it was escolar.

Ok, after hearing and seeing a lot of good things about this place on Facebook I finally had an opportunity to give it a try last night. I was meeting with a client and we were meeting at 7pm, I drove up and stopped at the sign for “Valet Parking” right at 7pm. The parking lot was full both with cars and piles of snow, it was cold and I didn’t really feel like searching for a spot, so after 3-5 minutes of nobody approaching my car, someone parked right out front was leaving so I just took that spot. No valet parker in sight.

Walked in and as the parking lot would suggest the place was jumping, the main dining room was full and the bar was standing room only 1 deep. After about 10 minutes a couple of seats opened up at the bar and we took them, asked for a couple of menu’s and settled in. One thing that’s pretty neat is they have an enclosed and heated patio with both regular dining tables and some couches/lounge style. The bar also is in door / out door similar to Osteria Cuchina a few miles north on 79. It will be a nice location in the spring and summer nights.

Similar to Osteria, while I really like the layout and style of this place, it’s biggest downfall to me are the customers. I’m sorry to anyone who lives in the greater Marlboro / Manalapan area, but it’s like central casting for guido #1 & guido #2 for the Soprano’s. There is definitely a bar “scene” lot’s of groups of women and men all looking to mingle. Nothing wrong with that at all…just saying.

Bartender was very attentive and as the name indicates it’s a seafood restaurant, they were rumored to have excellent steaks which is why I wanted to try Cuzins. I asked for a simple porterhouse for 2, was told they don’t have that however they have an “ultimate surf and turf” which is a 60 oz porterhouse for 2, sides of creamed spinach, lobster mac-n-cheese, shoe string fried onions, bacon and hot peppers served with a stuffed 16oz lobster tail. (so you have a porterhouse for 2 as part of the ultimate surf and turf but one sell it as a stand alone entree’…whatever…) As I said i was entertaining a client so this is what they wanted this is what we ordered.

We were then notified they were out of the 16oz tails, so we could get any sized regular lobster we wanted starting at 1.5lbs. We ordered the 1.5lbs lobster steamed, we were then told the smallest they had was a 2lb. Fine.

We ordered kumomoto oysters, shrimp cocktail and jumbo lump crab meat as appetizers. Oysters were excellent, the shrimp were not jumbo, I’m not even sure they were 16/20’s they looked more like 20/25’s. There were 4 to the order so that was “ok”, the jumbo lump crab was truly jumbo and very fresh.

It was around now we were notified they were out of porterhouse for 2’s and they were going to substitute it for a tomahawk rib eye for 2 instead. (same sides etc.) Ok, fine whatever. Things really dragged now it took probably 45 mins from the time they cleared our app’s to when we were served. During the delay the manager came over and apologized, bought us a round of drinks. During the 45 minutes the manager did bring out a few samples from the kitchen, one was a stuffed puff pastry and the other was a fried calamari, both were excellent. (these were given to most / all patrons at the bar not just us)

Finally the entree’s were served and they were very good. The lobster was steamed perfectly, not over cooked, the shells were cracked nicely not requiring the use of crackers. Very easy to eat and very well prepared. The tomahawk while excellent, I think it was actually too thick cut to be properly prepared medium rare as ordered. Meaning, at this thickness it didn’t seem as if the fat had a chance to cook, burn, melt a bit thus the meat having a heavier than usual fattiness to it. Yes, I know this is common to a rib eye, but it was just a bit more “fatty” than usual, don’t know how else to explain it. Still an excellent steak, just perhaps too thick of a cut. Sides were very good, the weakest being the lobster mac n cheese. It had nice chunks of lobster meat, but it was just “average” like they used kraft block cheese. No rich cheese flavor.

Seeing some of the food, a fried seafood platter, and several pasta & seafood dishes pass us all looked excellent.
I will definitely be going back. The ultimate surf and turf was $ 160 for 2 or $80 per person. Not an outrageous price considering I’ve paid close to that for a tomahawk alone at some places, I really don’t know if they up-charged us for the whole lobster or the tomahawk vs. porterhouse. 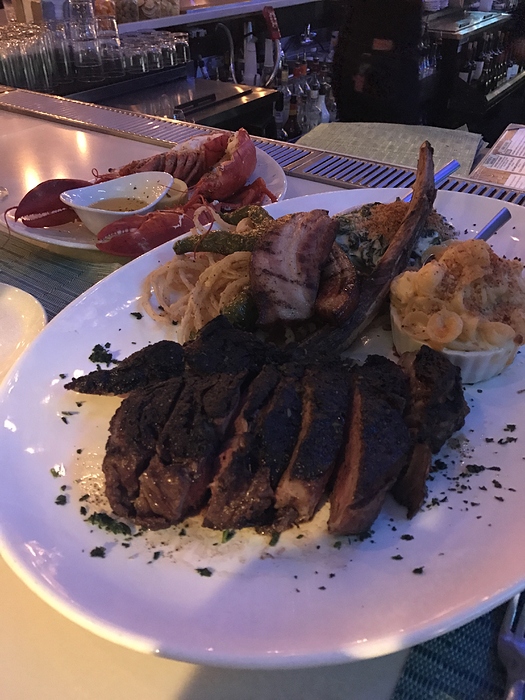 Nice! What did that 2lb run and was it a hardshell?

The ultimate surf and turf was $160. for the bug and tomahawk. It was a special so I don’t know if that was the original price or up sell price due to they running out of each. That did include all the sides. Honestly it was a very good price for all that was included.

Nice review Jr. I don’t know if that’s just an enormous plate but that does not look like a steak for 2. How many oz do you think the steak was?

Ginormous plate!! Joon, the plate has the steak and all sides on it! It’s hard to say the size, as I said the place was busy, the bar especially and they pipe in classic rock music, to be honest I had a hard time hearing the bartender. When she told us the size of the porterhouse I’m 90% sure she said 60oz, because it couldn’t have been 16, but 60 would be Yuuuge! This I would guess was in a 40-48oz range we did not finish it and I’m not sure I could do it even on a good day.

I’m glad the food was good because I could almost feel your pain reading the review. Seriously, we’re out of this, that and that too…

I’m sorry to anyone who lives in the greater Marlboro / Manalapan area, but it’s like central casting for guido #1 & guido #2 for the Soprano’s.

LOL.
As a non-Italian resident of this area, I agree with this statement 100%.

Have you been to Angelicas in the summer after 8? It’s filled with guidos! They do drive some nice cars though lol.

They have some great food. Try the pork chop…delicious! It’s one of my favorite dishes around here. It won’t start getting railed with si folks yet, so now is a good time to go. I don’t have anything against si but it is definitely a sight to see. Lots of tanning, plenty of chest hair and lots of gold chains lol

and that’s just the women!!