Anybody familiar with these? Apparently they are not really *short ribs" but I didn’t really understand this Chowhound discussion about how to think about this cut.

Apparently you can cook it fast or slow. I picked it up because it looked so good.

Sort of ike this, 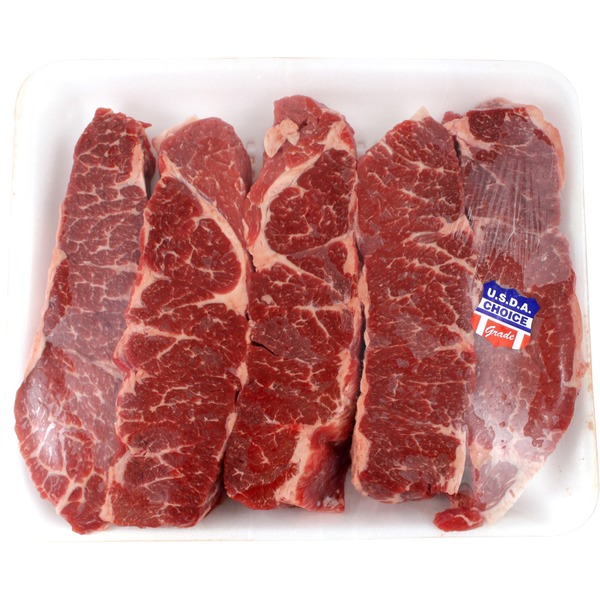 but maybe better, in terms of fine marbeling, and less “gristle”. It looked like “prime” to me, but now I’m not sure how to proceed. Hopefully it can be one of those cuts both husband and I can enjoy. He prefers well done, lean meat, I generally prefer the opposite.

I’ve already salted and rubbed it with Penzey’s Chili 3000. 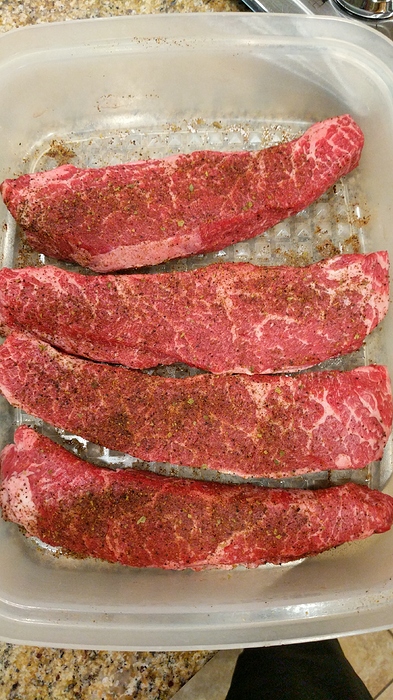 Either way, but low and slow in a marinade or sauce works for me. They are more like a cut up roast than ribs.

Thank you! I’m not sure what a “roast” is; like a chuck roast? 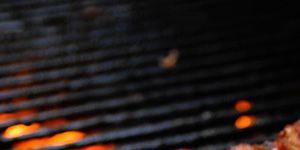 When Is a Rib Not a Rib?

A familiarization with the phenomenon known as "country ribs"

I’m not familiar with American meat cuts but that looks like something I’d slow cook. Seems ideal for a “low and slow” braise.

Watch me act like a “nut” and do both!

Thanks all! I’m off to work.

I was here to say you could do either – or both! I have had luck doing a hot, fast sear on those (to the rare side of medium rare) or the low and slow braise – it is an unusually versatile cut.

Although not always considered a barbecue cut, pork country style ribs are another common “rib” product. They are typically cut from the posterior of a 406 Pork Shoulder, Butt, Bone-in, or from the anterior portion of a 410B Pork Loin, Rib End, Bone-in. Either portion is split longitudinally ventral (beneath) the scapula or blade bone such that each portion contains a portion of the blade bone, or part of the vertebra with attached rib bone.le-ribs/

Color me an idiot. I assumed these were pork, not beef.
For beef, fast sear definitely.

I salted & peppered and browned them. Deglazed the pan with red wine and beef stock, all (on a bed of onions, carrots, celery, lemon grass, 2 tsp smoked paprika, 4 drops liquid smoke) into a slow cooker on low for 8 hours. Cooled and then refrigerated over night, de-fatted the next day and warmed it up to serve over rice. Fabulous.

I am of the low and slow school for short ribs of beef.

I’ve used this slow cooked recipe with the boneless Costco short ribs before and it came out well, even if the recipe does call for bone-in ribs: 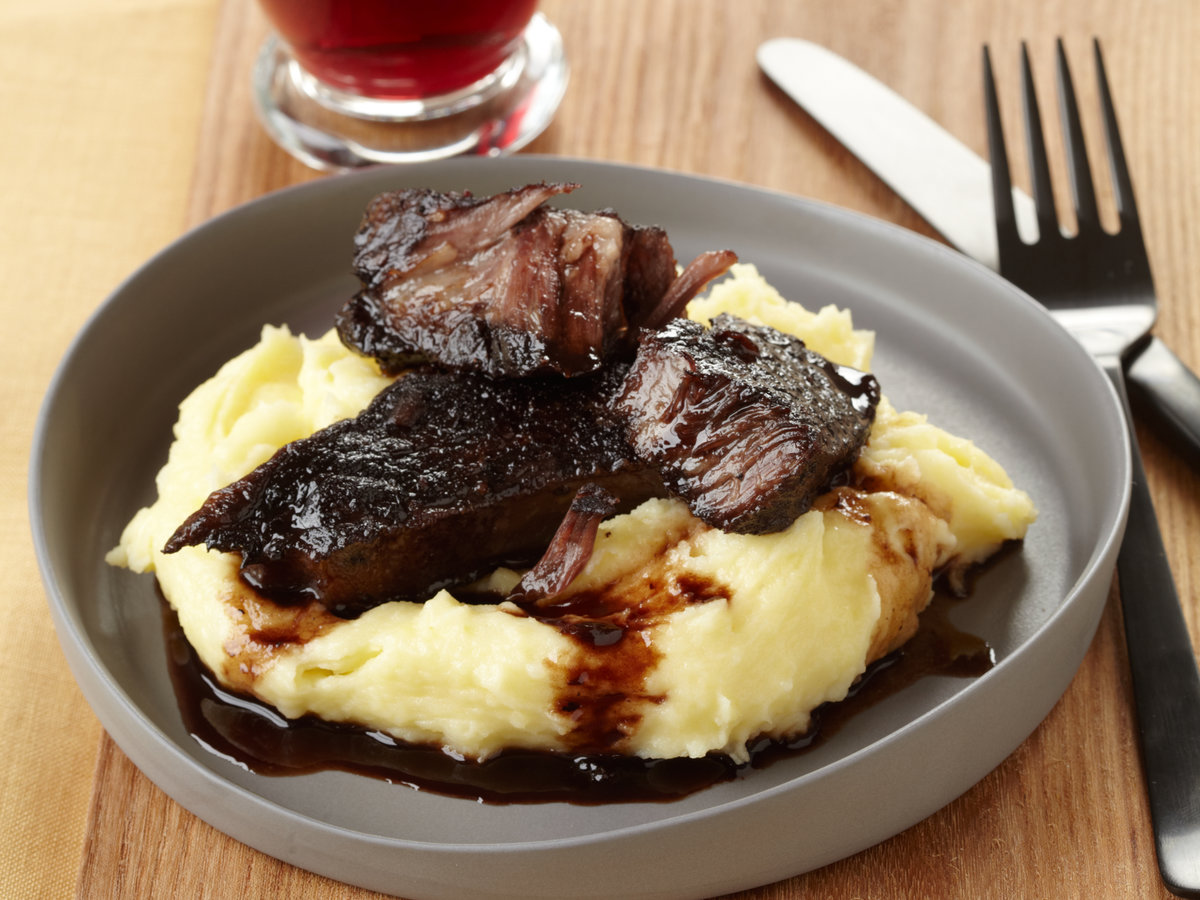 Tom Colicchio's braised short ribs are meltingly tender and marinated in red wine for a rich sauce. They're fabulous over mashed potatoes or buttered noodles.

I was sort of wondering if I should be able to make the connection between the pork and beef cuts. Maybe I should?

Anyway, I added some sear with a grill pan 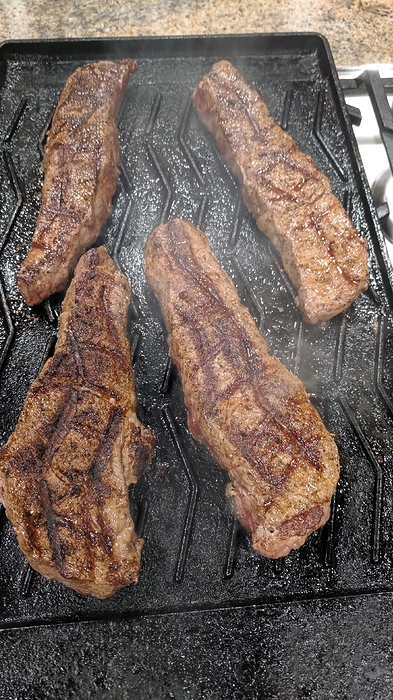 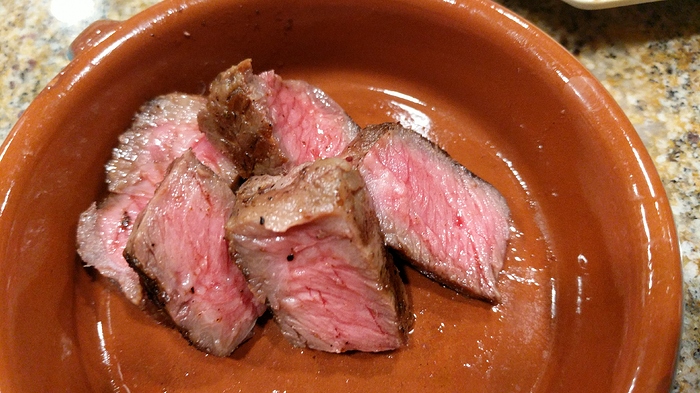 while the H goes to the gym, and braise the rest. Won’t be 4 hours, and I’m thinking beef broth with bbq sauce.

He likes “gravy”, but not what he immediately identified as “fatty meat”. He wants gravy from lean meat. Really?

I thought someone mentioned a beer braise. I have beer, and some red wine, but he’s not a beer or wine guy. Takes all kinds!

How long for the beer presence to cook off?

Oops! I had GINGER beer! 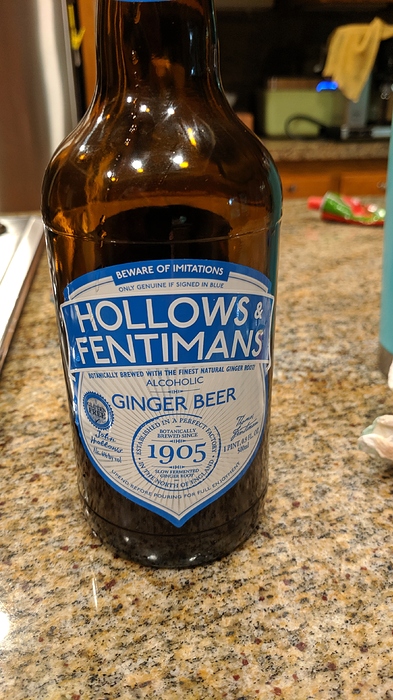 It was Short Ribs Braised in Porter Ale with Maple-Rosemary Glaze from the Chowhounnd thread. 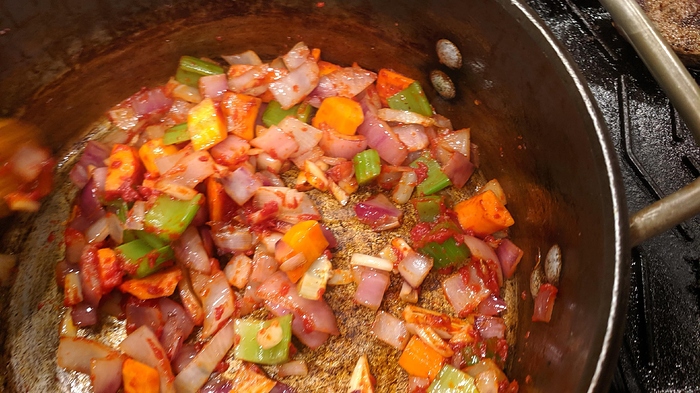 Here’s one with ginger beer. 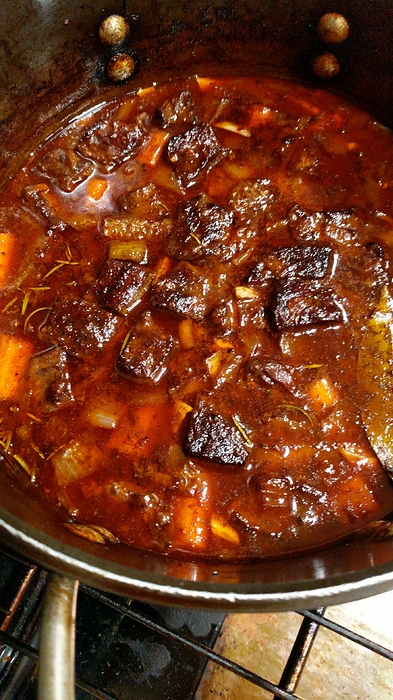 Not much made it to two or three hours. Lots of tastings.

Were these tender at 145? I believe Costco’s boneless “short ribs” are actually chuck roast cut into long strips, made to resemble short ribs (sort of like the beef version of pork country-style “ribs”). I wouldn’t think they’d be especially tender unless braised, although it does look as though yours were cut from a well-marbled section of the chuck. I find they vary greatly in appearance/texture/marbling from store to store and visit to visit.

Agreed! In fairness to me, our beef short ribs around here don’t look anything like the picture.
That’s why I assumed they were pork, as you’re saying.

Yeah - because what Costco sells as boneless short ribs definitely are NOT short ribs, LOL! Here’s what they look like with bones in: 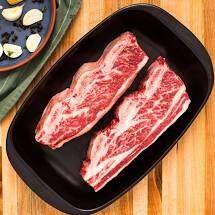 So here’s what an ACTUAL short rib looks like with bones out: 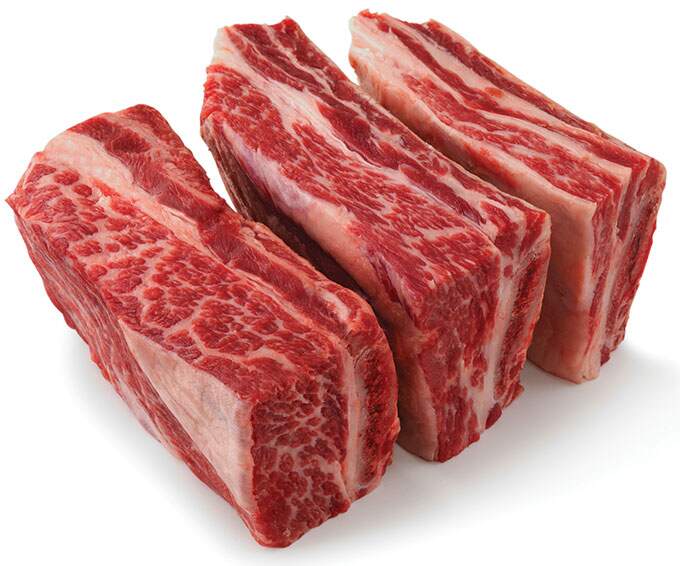 You can see the naturally-occurring fat/meat striations are completely different than Costco’s product.

I don’t think I’d use the word tender, like Wagyu tender, but it was not chewy. It was like I like my NY Strip, and I think I liked it better than the braised version ( which I tested a teeny piece of straight out of the oven). Husband seemed to enjoy the braised version, even though before cooking he christened it “fatty meat!”. I had to seduce him with the promise of gravy, but he had several servings.

I am usually at Costco for prime NY Strip, and I don’t often buy THIS cut, but every once in a while it looks amazing. I’ve never seen them label this cut as prime, but sometimes the marbeling looks better than what they label as prime.

I am usually at Costco for prime NY Strip, and I don’t often buy THIS cut, but every once in a while it looks amazing. I’ve never seen them label this cut as prime, but sometimes the marbeling looks better than what they label as prime.

I agree, I always look through the packages to see if any of them look especially nice. I have a hard time paying what they ask for it, though, given that I have been finding whole PRIME ribeye for almost the same price (last week flank, boneless short rib and skirt were all $9-10 per pound, and whole prime boneless ribeye was just $10.99!).