Do you want a Coke?

I’m rudderless, but it would be a familial failure to not carry on. My people are pioneers, after all.

Tears just dripped on my t-shirt.

Father succumbed to Covid-19 on December 12. The road was bad and I won’t bore you with the many injustices.

Devastating. I’m so sorry. Rudderless describes it. My heart breaks for and with you.

I read that somewhere. How could that possibly be true!?!

The one on Navigation is closed but the Berry Rd. location is open as far as I know. I just called and they seem to be there but I didn’t talk to a real actual human.

I hope they’re still there and as good as the homemade tamales are if you can be lucky enough to find rajas buy some, or all.

Luby’s 290 soldiers on. We were there today and I don’t want to broach the subject of closure dates with the employees.

The manager remains a stickler with condiment portion control be it tartar sauce or spaghetti meat sauce on the twice weekly special.

Could he be selling this stuff out of the back door?

I know you think the world of Luby’s tartar sauce. I admit it’s good. But Luby’s TS can’t hold a candle to Fisherman’s market and restaurant’s TS in Longview, TX… And that’s a fact.

Luby’s TS can’t hold a candle to Fisherman’s market and restaurant’s TS in Longview, TX… And that’s a fact.

Little known fact only a train geek would know Amtrak runs a bus from Houston to Longview and back so train passengers from the Sunset Limited can connect with the Texas Eagle in Longview which goes to Chicago.

I suggest a bus ride for you to Houston bearing tarter sauce. It looks like a nice bus.

Not right now ~ It’s been snowing for hours and we’ve actually managed to accumulate 1” on what the weather people call “grassy areas”. Longview might be shut down for days…

It’s been snowing for hours and we’ve actually managed to accumulate 1” on what the weather people call “grassy areas”. Longview might be shut down for days…

Houston is crippled on the smallest amount of snow.

I’m jealous, we’ve had a forty degree rain all day but me being a glass half full guy I’ll take the cold rain over relentless Texas summer days and nights. At least we can use the oven. Back to the turkey legs.

I suggest a bus ride for you to Houston bearing tarter sauce.

Not right now ~ It’s been snowing for hours and we’ve actually managed to accumulate 1” on what the weather people call “grassy areas”.

I took a road trip 59 South a few miles to El Campo (which we called Camp Elpo in high school, because teenagers are weird) to the crawfish mecca Pinchers for lunch. I went not for the crawfish, though they did have them for $7.99/lb, but for fried shrimp and catfish which a sibling has been raving about since pre-pandemic. These folks raise their own crawfish which you’ll see if you watch the YouTube video in the hyperlink. It’s a cold day and it was cold inside too, in the anteroom we opted for, for distancing purposes. Seating is fancy picnic table chic, which is practical in such an establishment.

I was craving half-shells which they had for $15/doz. They were large in this peak oyster season. The server split the dozen into 2 serving trays for Mr. Lamb and me, which is a nice touch. Mr. Lamb still ate some of mine as expected. We all ordered the combo, choose two items and 2 sides. I like a good stuffed crab and they had those so I ordered that and fried catfish with crawfish mashed potatoes and side salad. Sibling ordered her usual fried shrimp and grilled catfish with fries and hush puppies. Mr. L ordered fried catfish and Buffalo shrimp, ignoring my advice as to the shrimp because I’ve never had a Buffaloed shrimp that didn’t have mushy coating. This dish should not be a thing unless it’s unbreaded, in my estimation. He added sides of cole slaw and green beans. Sibling handed over two of her hush puppies for me to take home, saying they are extraordinary. The catfish was served just warmish and was chewy, overcooked or cut too small or something. The stuffed crab was decent and the tartar sauce great and house made. Crawfish potatoes needed butter or something like that. Mr. L said his shrimp were mushy (uh-huh) and the beans were canned but it was okay, just not special enough to drive an hour for. I agree. I might go back deep in crawfish season, hoping of course that price gets lower. There’s just so many Cajun seafood places close to home that put out much better product. I have not found any equal for Tony Mandola’s catfish. We fed the ducks and geese on the way out with feed in dispensers for .50 a palmful.

The same sibling insisted we stop on the way back and get whole chickens at Junior’s to go. Some of you make this drive frequently and know there are many BBQ places dotting this stretch, Mikeskas’, Hinze’s, that gas station Ostiones goes on about, etc. Junior’s is another such place with eat in tables and lots of the ubiquitous Oma’s jars of pickled items, BBQ seasonings and sauces. The chicken smells delicious, but I’ll have to report back after dinner on that. I also picked up some of their jalapeno and cheese sausage, a weakness of mine. At the register, I impulse bought a bag of chips I have not seen before - pepperocini.

After a whirlwind tour of Wharton (the TeePee Hotel is once again in sad condition after having been rescued by a lottery winner and completely remodeled), we headed home after this giddy day of entertainment. 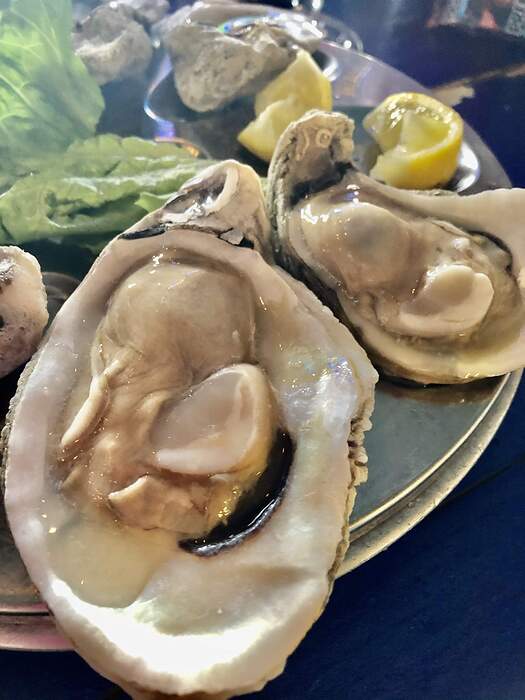 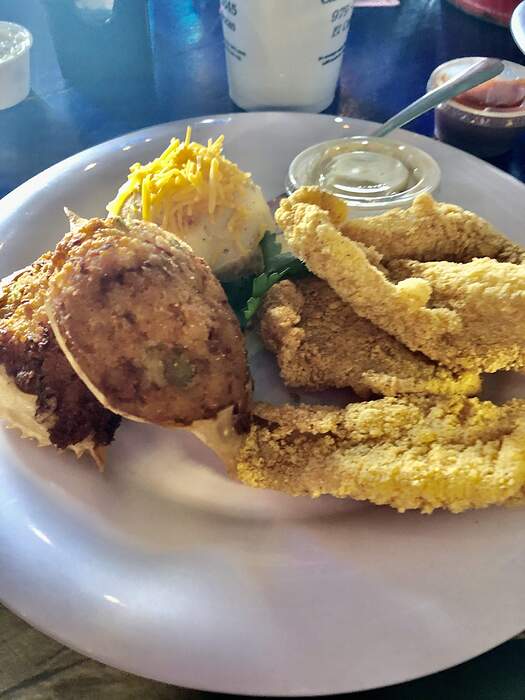 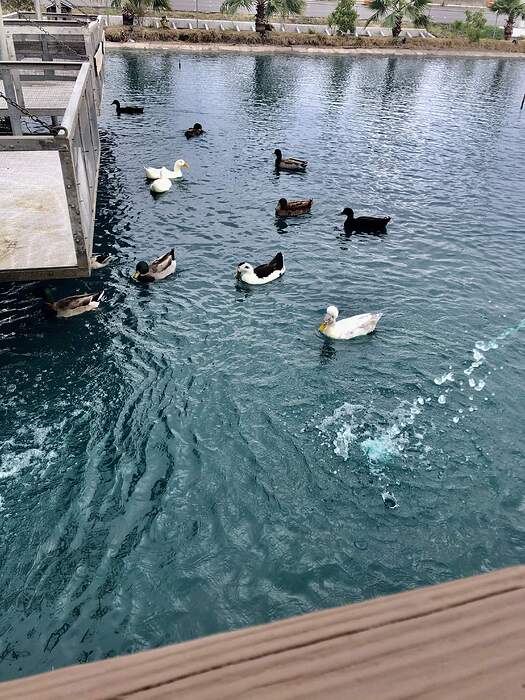 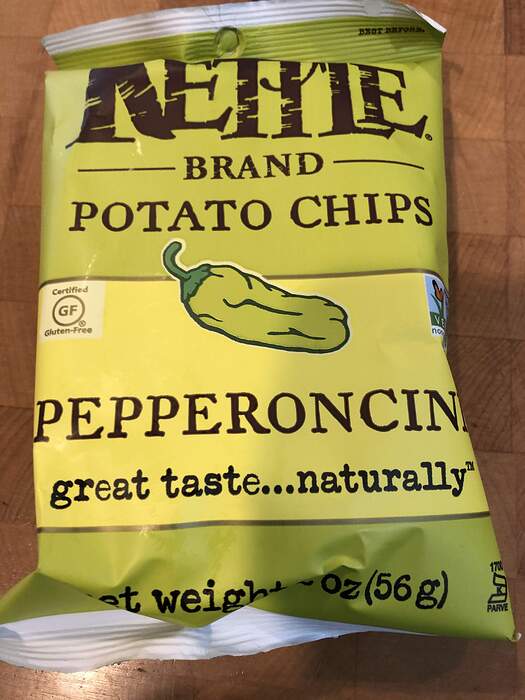 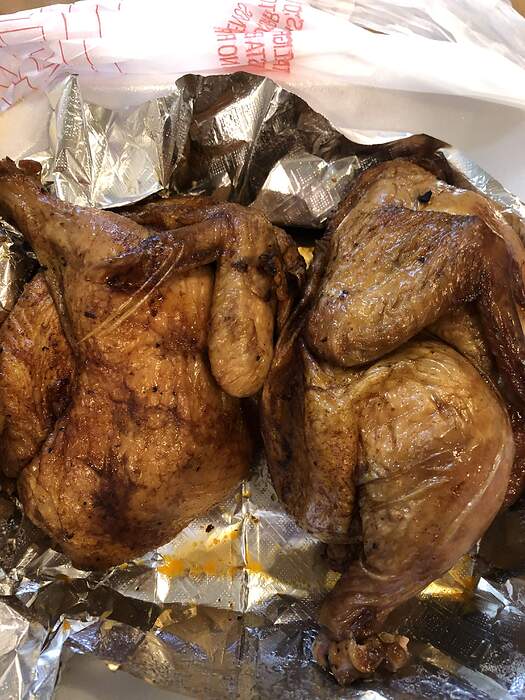 I saw it many moons ago and I think it was still in use.

So do I and have yet to find one. My father went crabbing, boiled them up, my mother painstakingly picked the meat out and made the best stuffed crabs chock full of crab. Hard act to follow but is putting a little crab in there too much to ask for.

I agree with you on your husband’s choice of Buffalo shrimp. Too funny. Sometimes you can’t tell them anything.

If you find a good stuffed crab let me know! I haven’t found one either lately. I had one so long ago I can’t remember where it was. I don’t like it when they add bits of other seafood. That’s a foul.

Thank you Robb Walsh, Bryan Caswell. and Southern Foodways for the spike in (oyster) prices

I found it! The best prices of the season. At District 7, various locations about town. 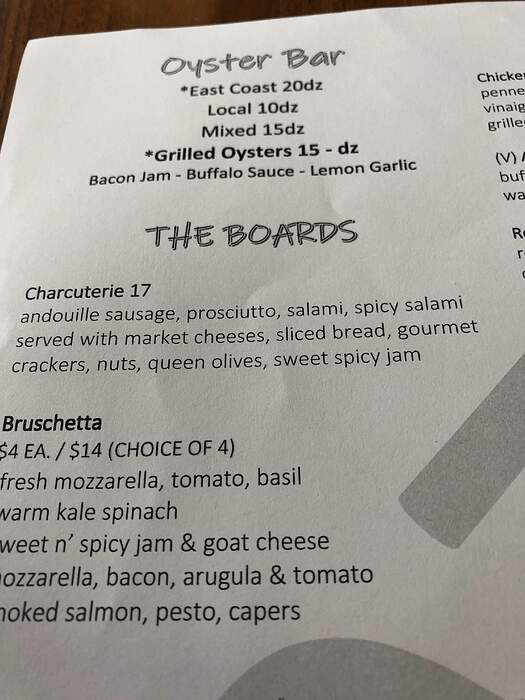 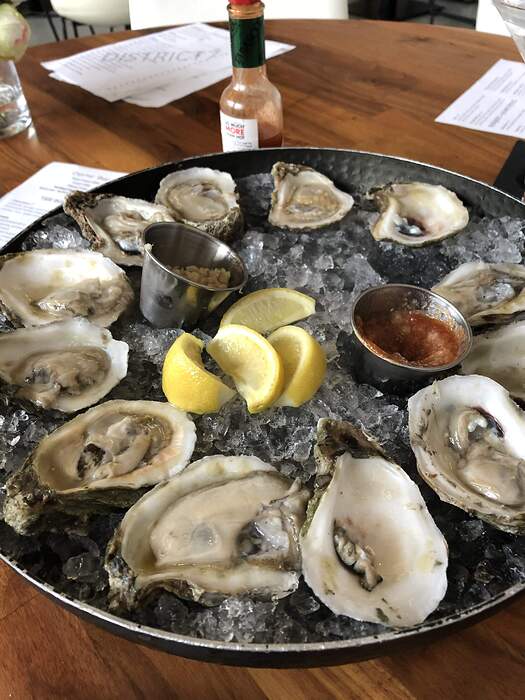 So do I and have yet to find one. My father went crabbing, boiled them up, my mother painstakingly picked the meat out and made the best stuffed crabs chock full of crab. Hard act to follow but is putting a little crab in there too much to ask for.

Your mother showed great restraint picking crab. When I make a blue crab creole I can’t resist a couple of delicious back fins.

I found it! The best prices of the season. At District 7, various locations about town.

Don’t look for prices to go down, a lot of Galveston Bay Bay has been closed due to small size.

So the prices seem to defy logic. Oysters aren’t something most people are going to mess with at home. They’re not going to shuck them themselves, (present company excepted of course!), and I doubt many people are ordering them in. With restaurants here barely serving enough people to survive, you’d think the prices would be dropping.

I hope it, (the Wuhan flu quarantine), allows the beds everywhere to thrive and grow, but you’d think think there ought to be a surplus.

So what’s up with that, jc?