However, no matter how tight-fitting my pot’s lid, the starchy water from unrinsed rice will always spill over. This happens in my rice cooker, too. If I use a much larger pot, the water evaporates too fast. With other non-absorption methods of cooking rice, I lose the starch.

Does anyone have any suggestions on how to avoid this?

I have never had this problem, rinsed or unrinsed. I put rice in a heavy cocotte, taking up maybe 20% of its capacity. Add water to the height of a knuckle over the rice. We’ve now used just under half its capacity. Bring to a simmer unlidded. Put on heavy lid and turn down heat to very lowest. Turn off heat after 15 minutes. Let steam lidded for 5 or so. Fluff.

I might not be understanding correctly. Do you mean that by adding water to the height of a knuckle, you go from 20% to 45% capacity?

In this small Le Creuset coccote, yes. 7" inside diameter. 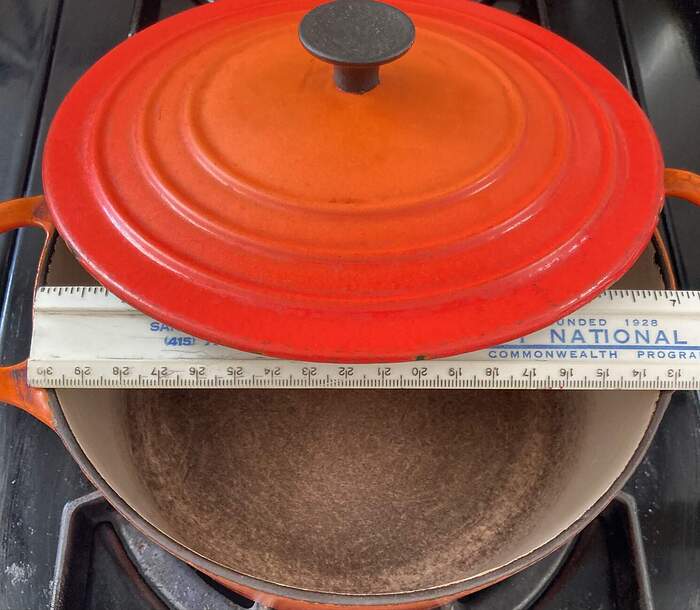 I’ve never had this happen in a rice cooker, as they are usually well vented to manage the starchy water issue. So you have a simple model or a “fancier” model (eg, fuzzy logic cooking)?

Rice/congee/oatmeal boiling over in a regular pot happens a lot unless I watch it like a hawk or adjust my pot lid. I use chopsticks to prop up the lids to avoid spillovers, so there’s really no issue unless I space out. If you feel the water is right and the texture is not an issue when it’s done, I would just plan to prop up the lid, or place or askew while it cooks. I cook similar to @pilgrim - after the boil, it’s very low heat until rice is cooked through, and there’s usually no issue with spillovers after the initial boil.

Simpler model rice cooker. It has a vent hole in the lid and all the starch comes out of there.

My mini Dutch oven is about the same size. Those really are the best for rice!

I’ll try and snap pics. I do sometimes wish for starchy yet fluffy rice in general, so it’s worth investigating.

I never cook unwashed rice, for the usual reasons - taught, read about arsenic etc, and so on.

But I think you need a lot of headroom for spillover not to occur.

The trick with lentils might work here though - pour a bit of oil on top of the water - the fat supposedly inhibits the starch bubbles from expanding too much and spilling out.

I would use oil but for this recipe I’m worried it might prevent the rice from sticking properly.

Once I was at Trader Joe’s and asked a worker why they didnt carry and US- grown rice. I was told domestic rice had arsenic issues, that’s why. Not sure if that was an official stance of the company.

A few drops on top won’t inhibit sticking. Dal still congeals into a blob when cold.

Washing by running water through rice in a strainer for a few seconds likely won’t impact the hardness or stickiness. Will it help your problem? Try it and see.

Washing by letting it sit in standing water for a few seconds stirring with your fingers likely will have some impact. And extended washing in this manner means it’s actually soaking rice which surely will and should only be done by design.

Keep the lid half open. That’s all.
Anyway we in Sri Lanka, especially the rural villagers, put a little bit extra water when cooking brown//red rice, and when it boils well drain the water, add a little bit of salt, and drink it. It;s a thick, bran rich, food drink.

A spritz of cooking spray on the top surface if the water should do it.

I never cook unwashed rice, for the usual reasons - taught, read about arsenic etc, and so on.

I was feeling guilty about rarely rinsing rice. But it turns out FDA research has shown it doesn’t do much:

“The FDA research also shows that rinsing rice before cooking has a minimal effect on the arsenic content of the cooked grain and will wash off iron, folate, thiamine and niacin from polished and parboiled rice.”

I usually rinse rice out of habit and then I always parboil it to get rid of aresenic. I don’t worry at all about losing any nutrients as I worry more about the arsenic. My kid loves rice so I always parboil the hell out of my rice. Link to an article for anyone interested.

This is the technique that I use. I didn’t realize it had been published.

For any former Chowhounds reading along, this would be a subject right up Sam I Am’s alley.

I watched a YT video by some apparently, famous vaguely annoying food-vlogger making a huge deal out of washing rice not being a big deal. That’s 15m of my life I’ll never get back.

I’ve semi-convinced myself it makes a texture difference, but I’ll acknowledge other factors very likely swamp that in practice – like exact amounts of water, cooking time, heat, etc. And variety of rice. Normally I’ll wash basmati rice but not American(-style) long-grain as they feel like the idiomatic ways for either kind, that goes well with the corresponding dishes – but that might just be sheer rationalisation, too!

Never noticed it making a difference either way on the pot boiling over. But that is a bit of a juggling act either way! Needs careful timing to get it down from an open boil to a covered slow simmer without it boiling up on the one hand, or killing the steam on the cover. And in line with what others have said, a low, slow simmer is very much the watchword. Will likely take quite a bit longer than the ‘boil it like pasta’ method, and potentially longer than on the pack if it gives an absorption-method time at all.
Hopefully not too much of an issue once you get the heat and timing balanced right. Unless your or your fellow diners’ stomachs have you under acute time-pressure.

Might need to adjust the quantity of water a little too, if your pot or your cooking times means you’re losing more steam. And as I artlessly demonstrated recently in another thread, being able to cook ‘normal’ white rice successfully also fails to carry over to the parboiled/off-white/‘easy book’ stuff!

How long is ‘extended’ washing? I generally finger-stir and drain my basmati three times, at which point the visible surface starch is largely gone. But for pre-soaking – which I don’t personally do – I’d assume letting it stand in still water for at least half an hour…

I didn’t even know some people rinse rice until recently. Rice to water ratio is 1-2 and it doesn’t boil over in a large enough pot.

I never rinse rice, and only cook brown rice. I use the pasta method: boil the rice uncovered, vigorously, in a large amount of salted water for 10 minutes less than the package says. Turn off the heat. Dump the contents into a strainer and immediately return the rice to the hot pot, immediately covering it tightly. Wait 15 minutes. Serve.
The sitting time allows the rice to absorb the residual water, remaining fluffy and separate.

Hi there. I have 1bn angry Indian people outside my house informing me that “some people” is a slight understatement.

For brown rice, that makes a lot of sense to me – and I’m sure I have an antique half-pack of brown rice somewhere I’m tempted to try this with, if the boll weevils and mice didn’t get it first. Surface starch isn’t going to be an particular issue, and life’s too short of try cooking it by a pure absorption method – would that take an hour? Two? All weekend? Seems logical to do what’s essentially an extensive parboil, then follow that with an absorption phase to get the right texture as a finish.