Cooking experiments gone wrong- what are yours?

Let me start with one from the weekend. Technically not cooking. But I was making Pate de Fruit. Added guar gum (which I have at home) instead of pectin (which I don’t have).

The result? The candy doesn’t gel. The slurpy thing tastes like guar gum. The lesson- use pectin.

Many years ago. During seasoning my wok (a very early one), it bursted into flame.
I know it is not “cooking” per sa, but what can be worse than setting something on fire?

Edited: Ok, I have cut myself twice before… but those are not really cooking experiments.

One of my most spectacular disasters was in cooking a beautiful venison backstrap slo-n-low in a Texas Pit. I seared it, and put it whole into the Pit. It came out 3 hours later with a fantastic smoke ring…

…but the inside had the consistency of oozy, grey toothpaste. Very bad mojo. High heat henceforth and forevermore for me with venison!

HA, the first time I tried to make vodka sauce, I went rather heavy on the vodka and put a flame to it. WHEE, that was a fun exercise! Burn, burn, yes, you’re gonna burn!

Really? Ha ha ha. I didn’t know it it can burn like that. Well, at least vodka flame (alcohol flame) is usually not to bad which is why a lot of those teppanyaki chefs use alcohol (I think). 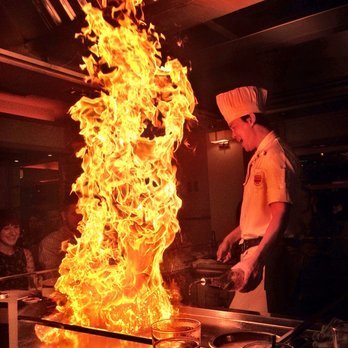 They tend to come and go quickly.

I hope you didn’t get hurt or damaged anything.

In my case, the oil in wok bursted into flame, and I was like… “Oh my, this is not going away”. I put a lid on it. After a few seconds, I lift off the lid and then the fire started again within a second (you can tell the oil must have been very hot and it just self combust by contacting air. Then I was “Oh F*** sh****t!” I then put the lid back on and put the whole thing in the oven and didn’t open it until 5 min after.

My single worst experiment was years and years ago - but we still talk about it.

I tried to “wing” an orange soy glaze for salmon. Sounded good.

) that it was nothing but a horrible salt lick.

It was one of the few things that I’ve made that we refused to finish and orders pizza instead.

Wow it was so bad.

HA HA HA! You gave your wok a time out in the oven! That is rather scary, glad you weren’t hurt.

Yeah, I was safe, too. I sort of laughed maniacally like your hibachi man there. Look at his expression–it’s like WOOOOO! FIRE IS GOOOOOD!

I make mistakes all the time cooking, sometimes requiring binning dinner, or radically revising whatever it was dinner was supposed to be, but the one I most regret is having invited guests to a late Sunday brunch and deciding to whip up some kind of huevos revueltos recipe that called for first toasting dried chiles in a pan. All my guests had to flee to another part of the house, tears running down their eyes, while binned the chilis and aired the kitchen.

there is insufficient electrons in the universe to enumerate my kitchen fails.

We can’t even remember what was in some awful dish I made back in 1981, all we can remember is that it was green, all green. We shudder every time it comes up.

I was learning to make cheese for blogging purposes. Since I live in a land-locked “good” milk state, I was trying to find out if you could make chevre from powdered or condensed goat milk. Google gave me no help, so I thought welp, I’ll just give it a try. It was a complete disaster. Disgusting beige slop. While still one of my most popular blogs, I decided to stop playing Frankenstein in the kitchen. For a while, anyway.

Some years ago for Valentine’s Day I decided to try a new recipe for Chicken Mole. Well, I didn’t have all the right ingredients so I substituted this, & that & something else and it was a whole inedible mess. The dog wouldn’t even taste it. Which began a tradition of going out for Valentine’s Day dinner.

Ha ha. The first time I flambeed something on my mother’s gas stove I thought - yes, you could probably end up with a wicked fire doing this… I was flambéing some candied nuts with brandy.

Good thing I was never much of a hairspray gal, HA HA.

Fresh from a few minutes ago when I put my mini-loaves of banana bread in the oven, all prettied up, swirled with cream cheese and topped with pecan streusel, when I realized all the sifted dry ingredients were still on the counter. Nice going.

I had a vision of a beautiful fritatta in cast the springform pan, perfect and round and plated with a cauliflower florets arranged in a circular pattern interlaced with tendrils of zucchini - fluffy free -ange eggs whipped with fresh raw-milk and dotted with bacon it was to be worthy of a magazine cover story about casually elegant Italian from leftovers… the the darn thing started leaking - eggs on the table eggs on the floor unceremoniously dumped into a corningware - it still tasted good but sure a’int pretty

I have had one major cooking disaster, and please, God, don’t let me ever have anything happen to top it! It was a long ago Good Friday, and the kids wanted to watch a prime time movie. Okay. BUT! They had to take a nap if they wanted to stay up that late. They considered it a fair trade. Around five I decided they would be waking up soon, my husband would be home soon, and I’d better make a dinner that would go well with the Charlie Brown movie. Tacos! So I made the filling and set my lovely Le Creuset frying pan – the one with the oak handle- on the burner and filled it with at least an inch of peanut oil to fry the taco shells. And then I remembered I hadn’t taken my medicine, so I dashed to the bedroom to get it. Annnnnd the phone rang. (sigh) And I forgot about the oil heating.

Twenty minutes or so later, when I got off the phone and opened the bedroom door, the “new” ceiling was an ephemeral black cloud that floated about an inch over my head! It had “threads” of melted plastic (the handles from the top oven of the stove) drifting in the air. I rushed to the kitchen, put out all of the fire I could (which included kitchen cabinet doors on each side of the stove, slammed the ruined Le Cruset frying pan into the bottom oven, put a fuill kettle of water on the burner I could no longer turn off because there was no knob, and then rushed to the hallway and closed all of the kids bedroom doors, and called the fire department for help with smoke control.

My insurance company was fabulous! They covered everything and waved the deductable if I would run the crystal through the dishwasher myself. The insurance company was great, but my agent was not. He forgot to tell me that until they had the kitchen restored, the whole family was covered for three meals a day at ANY restaurant of our choice! We lived in Del Mar (CA) then, so instead of a fabulous Easter buffet at a top restaurant we “made do” with pancakes, scrambled eggs and little pig sausages for Easter dinner, But we were all alive and safe and very very grateful!

The claims adjuster told me that the average American family has three house fires in their lifetime. I told him someone else would have to have my other two because I was through with such idiocy! All of my other cooking disasters have been minor irritations by comparison. And I tend to avoid making tacos when enchiladas are so much safer! '-)

use cold lard to fill up the groove, then insert bottom. put something under the spring pan to catch the melted lard.

the eggs will set up before the lard melts.

And I forgot about the oil heating.

Similar experience with cooking fried rice with a Tefal type of non stick pan. While cooking I had to look at internet for recipe following with a phone call. When returned, the oil got so hot with the rice carbonised. Tried all the gentle way to remove the stuck food and not damaging the coating, including heating up baking soda and vinegar… the pan is declared dead.