Cooking experiments gone wrong- what are yours?

Well, when we just moved in to our “only electricity and no gas” new house, I wondered the ways to use some non induction-ready pots with the brand new induction cooktop and. I messed with heating an empty dutch oven with a Bialetti espresso maker placed inside and was wondering why shops need to sell us these expensive induction interface disk. As the coffee was ready and started to boil, several drips landed on the extremely hot pot, and it instantly melted the enamel coating of the cast iron pot. (OK inside it’s kind of silvery colour.)

I learn my lesson. Now all my pots are induction friendly!

several drips landed on the extremely hot pot, and it instantly melted the enamel coating of the cast iron pot.

This piques my interest. Are you saying the coffee drips on the hot enamel did the damage? Or was it where the aluminum bottom of your Bialetti was sitting? The reason I ask is that, if it’s the latter, you may just have a superficial aluminum smear on top of the enamel. If the former, I would expect to find pits/flakes down into the enamel you can feel under your fingernail.

Hi Kaleo, it was the hot liquid with the extreme heat did the damage, liquid dripped with lots of vapeur, metal melting and pieces coming out. I’m not sure the pot is enamel coated, it’s a Staub. Anyway, I continue using it, I bet I just get more iron supplement. 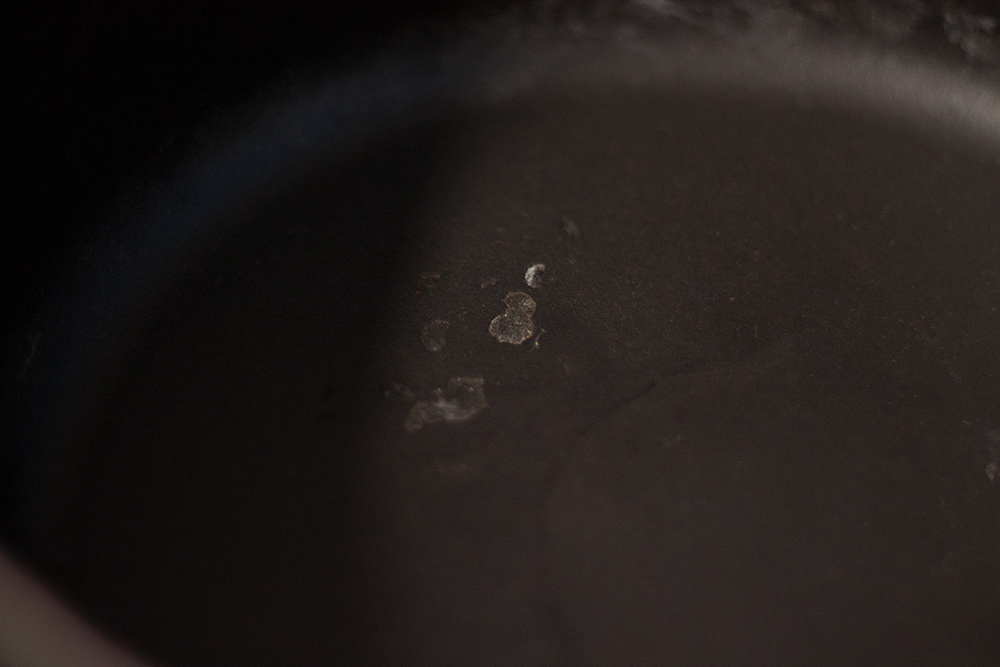 Ah, the photo tells the story. You did flake away the enamel.

That tells us that the thermal shock caused by dripping aaprx 210F water onto very hot ECI is enough to fracture the enamel.

I (actually Wahine) once ruined a LC 9Q round by boiling it empty. The enamel did not flake like yours did–it melted and heaved it. Had I spritzed it with water while it was hot, it probably would have flaked as yours did.

Sorry for your loss, but I’m confident you can still safely use the pan. Do you?

Oh, I have been there! Making double fried potatoes. Did the first round, took them out, kept heating the oil and got distracted. Next thing you know --poof. Roaring flames in the pan. Smoke everywhere in the freshly painted house. It was so hard to put out. Finally remembered I had a fire extinguisher. That worked but not before it shot ashes all over that left little burns.

I love lamb and I love mint jelly on lamb. What to do with leftover lamb to take to work.

Two same size boxes next to each other in the cupboard. Yup, I grabbed the baking soda, instead of the cornstarch. Bubbles everywhere.

Oh, gawd, I’ve done some version of this.

Did you use mint or mint jelly? The latter sounds hunky dory.

use cold lard to fill up the groove, then insert bottom. put something under the spring pan to catch the melted lard.

the eggs will set up before the lard melts.

Fabulous trick - this is why I love food-related forums!!!

When I was a young kid (8 to 10 year old) I wanted to participate in making the dessert for mother’s day so my family let me cook up a box of duncan hines brownie mix (what could go wrong?).

I was very proud of my mix but my older sister was wondering why it was bubbling so much. I told her it was normal (how. would I know?)

The brownie caught fire in the oven.

I was supposedly to cook some desalted cod (stored bought several time). I even tried a new recipe this time. When the dinner was ready, hubby took a bite, and complained that the dish was extremely salty and uneatable!

I looked at the label again…actually, this time it didn’t say “desalted”! Ouch! We ate the dinner without the fish.

I gave the fish a second chance, I desalted it properly and now it is now simmering with vegetable to make fish soup. Hope it will be good!

Not an experiment but a cooking episode gone very wrong. Several years ago I attempted to make pizza dough and after forming my dough balls put them in the cold oven to sit and proof. One ball in a stainless bowl, the other in a plastic one. As covers I used a plastic grocery bag and went on about my day. Checked on them a few times and they were doing nicely. Got much busier through the day until my wife called that she was done with work and needed to be picked up. As I ran out the door I put the oven on high as I walked out so it would be ripping hot when I got back. (Slap forehead)Totally forgot about the dough proofing in the oven

When we returned and opened the door and white acrid smoke was pouring out of the oven. At that moment I knew I had fucked up big time and as I opened the oven there was enough oxygen to cause a burst of flames to ignite. Thinking as fast as I could I tossed a bowl of water in the oven which did put out the fire. Only to see the plastic bowl and bags melted all over the racks and oven floor.

Multiple floor fans were used to evacuate the smoke from the house. The acrid smell lasted for at least a month or two. The bottom elements of the oven were covered by a metal plate which I as able to clean pretty well. I ended up tossing one of the racks which had plastic I could not scrape off.

Lucky the house didn’t burn down. The oven works fine and the house eventually smelled normal. I have never made pizza dough since then…

This was not the first time I was spared from death and smoke inhalation.
Backtrack to a few decades ago when in prof school and when I met my now wife we were going to a school picnic the next day and I wanted to make boiled peanuts to take.

We had been out all day partying and when we got back to the apartment I got the peanuts on the stove. We ended up sacked out in the bedroom from a long day of too much beer. I opened my eyes to see a thick cloud of white smoke about a foot or two above my face. At first I thought my contacts were dry and dirty as my vision was cloudy. Then it hit me. They weren’t in and I knew what had happened. Again a fan evacuated the white smoke from out of our 10th floor apt. What was surprising was that there was a fire station next store and no one seemed to notice the white smoke bellowing out of our apt balcony. I have made boiled peanuts since

Thanks for sharing. Wow, from now on, I think I will not try to do anything with the oven except its original purpose. I can be quite forgetful too…

Someone had baked something else after I had made my last batch of bread the day before. They had moved the racks around. I wasn’t thinking, put the bread in and when I went to rotate my loaves, I opened the door to find 10 loaves of bread that had risen and baked into the rack above them!! I never lived that down.

I’m having a good old chuckle reading some of these.

The pressure cooker … who hasn’t got a pressure cooker story? I put a chicken soup on in the pressure cooker, the doorbell rang, it was my aunt and cousin, she couldn’t stay long (I’ll only be a minute she says) so we chatted on the doorstep (15 minutes or so) and suddenly we hear a bang. Ran into the kitchen and chicken, carrots, onions, leeks are all on the ceiling, dripping boiling liquid over the kitchen floor, cabinets, counter tops.

I once made a chicken liver risotto that my now ex husband still laughs about, it turned out gray and was gross.

My mom’s favorite story was going to her best friends’ new apartment. They had a sparkling white new just built kitchen, mom offers to make the coffee in a French Press. As she’s pressing her hand slips and coffee grounds disappear into every crevice and grout in a 5 foot diameter. I believe the stains are still there 25 years later.

Loooooong time ago, neophyte cook trying to impress a beau, decided to deglaze a pan used to saute halibut steaks. I couldn’t find the dry vermouth and used scotch instead (figuring that they were close to the same color). Bleech, not a do-again.

Same timeframe, decided to make an angelfood cake while my mother was out. Separated 13 rggs and whipped (and whipped and whipped!) the whites in a plastic bowl. When my arm wore out, I figured they must be done. The resulting cake rose about 1 inch and had the texture of rubber. Our dog buried it.

Yep, same time but the third in the series - I decided to cook bacon. Yes, there was (another) beau involved … black iron skillet, 1 stick of butter, bacon on high heat. I left the kitchen. Smelling trouble, I returned to find a big fire already at the ceiling. Called the fire department but by the time they arrived, there was serious damage. The wood shake roof did not help. A lot of renovation was necessary.

That was it for me in the kitchen at home. I went to school in France and talked my way into a small restaurant kitchen, wanting to learn everything that I didn’t know. As you can imagine, with this history, I needed to learn just about everything.

Sure there have been stunning errors over the years, but this early trifecta launched a long and enjoyable food career.

The thought of deglazing a fish pan with scotch seriously made me gag, lol!

I was making monkey bread from a recipe that called for 1.5 lbs of frozen bread dough, thawed. My grocery story only sold 1-lb loaves, and I didn’t know what I would do with the extra 0.5lb of dough, so I just scaled the recipe up. However, I only had one bundt pan… and I filled it to the top with cinnamon/sugar-coated dough balls. When they baked, the top layers exploded off the pan and went shooting around inside the oven. Scared the crap out of my roommate’s cat (well, me too, to be honest). Tasted good, though!

Just had a new one last week! I made pork rillettes similar to the recipe posted on Serious Eats - they turned out fine, maybe not worth all the work. Then I jarred them and topped the contents with melted lard, let it cool, and put the tops on. Three days later they just… started rising. Like bread dough or something. Lifted the lids of the mason jars, causing streams of lard/pork broth to spill over and run everywhere. And the smell. Oh gawd, the smell.