Ok… from my “Need More Veggies…” thread you guys got me interested in curries, and many of them call for Coconut Milk (which I’m happy about as I am a fan).

Do you buy it or make it? I do have a Vitamix, so I can take fresh coconuts and blitz the hell out of the water and flesh… problem is, fresh coconuts are currently $6/each at my local Safeway.

Am I correct in my assumption this would be better than canned? And if so, for those of you that make it this way, how much do you get from a single coconut? How long does it last in the fridge?

Or if canned is the way to go, do you find much difference between brands?

I’ve made it once and it was a huge pain for me (don’t have good equipment). I’m fine with canned. There was a guy on CH who had specialized equipment and a ready supply of inexpensive coconut (not sure where he lived) who really liked making his own.

For canned, take a look at the grams fat per serving size as a proxy or guide to how much actual coconut is in the product. Be aware that serving sizes also differ between brands - some 80 g/serving, some 90, some 100, so you’ll need to factor that in.

I usually buy Chaokoh brand and am pretty happy with it. Several people here and at CH have recommended Aroy-D, but I’ve never bought it (I might have to start ordering from Amazon, though - as I noted in another thread, coconut milk is for the last several weeks hard to find).

ThaiKitchen is ubiquitous but a lot lower in fat and (IMHO) okay in a pinch but I’d rather not buy it. Especially given it’s quite a bit more expensive than Chaokoh.

I’ve never made my own coconut milk, so I can’t weigh in on the advantages. The disadvantages: cost, opening a coconut is among my least favorite kitchen tasks, canned lasts longer, Thai coconuts are considered to be the best and I don’t live in Thailand.

I have found vast differences between brands of coconut milk. Some of them contain stabilizers which, in my view, adversely effect the texture of the dish. My local Middle Eastern market carries several brands. The brand I buy, Chaokoh, is made in Thailand and only has four ingredients, coconut extract, water, citric acid and sodium metabisulfite.

I haven’t checked availability recently, but I was always quite happy with Trader Joe’s organic canned coconut milk and cream. It’s pricier than some others, but it contain no stabilizers or preservatives, just coconut and water. Product of Sri Lanka.

Epicurious agrees with you. Personally, I dislike shopping at Trader Joe’s. 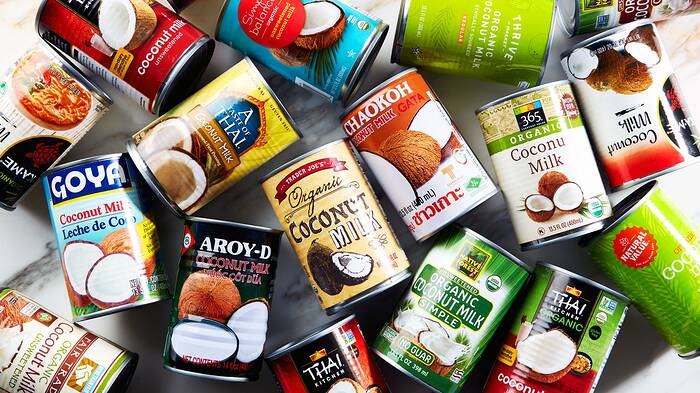 We tasted 16 cans of coconut milk to find the best one for cooking, whipping into coconut whipped cream, and putting in your smoothies.

Lots of Thai Kitchen variants which no one recommends.

Online:
The Chaokoh stuff - Coconut Extract, Water, Citric Acid (as antioxidant), Sodium Metabisulphate (as preservative)… is stupid expensive ($10-12 per 13.5oz on Amazon) unless I buy a lot of cans (8 or more), plus I hate Amazon, and there seems to be issues re monkey labor with this brand.

AROY-D - Coconut extract, water - was last rated best by ATK (though I don’t always agree with them), and can get it online for about $3/can.

So leaning towards Safeway Select or AROY-D… but still would like to hear from those of you that make it from fresh coconuts.

As long as it has no emulsifiers or preservatives, I buy and use it. You won’t tell much difference once the spices and other ingredients are added. You do want full fat if you are making Thai curries in particular, because you cook the curry paste in that fat and then add the rest of liquid.
Making it from scratch would be a fun project, probably about once, for me!

As long as it has no emulsifiers or preservatives

Well, that rules out all of them other than the AROY-D.

making it from scratch would be a fun project

Gonna do it, as soon as I land on a curry recipe I want to try. This will take a bit more research though as I don’t quite understand curry spices. I know you can buy blends labeled as “curry”, but there is no such thing as curry powder, right? It is a blend of other “real” spices like turmeric, cumin, peppers, ginger, coriander, etc.?

I like the black eyed pea/coconut milk curry that’s the third recipe down on this Smitten Kitchen post. For the record, I also like the other two recipes.

I spent the summer in Israel when I was 15 years old, and while I know I did all of the expected stuff–day trips, stays at hostels and kibbutz, the big cities and the desert–one of the …

Aroy-D is a solid choice.

There are many curry types–it gets really complicated. This is a good basic Indian style “curry” recipe (throwing a curve ball here, as it uses curry leaves, which are not at all related to curry spice blends): https://www.bonappetit.com/recipe/all-purpose-coconut-curry

Are you looking in primarily “American” grocery stores? I find them very limited in what is offered. East or Southeast Asian groceries would likely have Chaokoh or Aroy-D brands available (they’re my faves too).

Yup… pretty much all we have up here.

Sorry to hear that. The closest Asian store to me is about 30 minutes away, When I go I try to stock up on pantry items, especially coconut milk.

Being in the Caribbean I’m used to freshly made and lots of people here won’t use anything except fresh. Obviously we have access to lots of coconut and they’re less than $1 here, though. And the canned coconut milk available here doesn’t thrill me after having used Thai brands which I find much better. Personally I will make fresh coconut milk it when it really counts and use canned when it’s not much of a difference. In curries I think canned is fine. Whereas I want to make kaya sometime and for that it has to be fresh for me.
I’ve seen people make coconut milk from dried coconut, but I haven’t tried it to compare. You can make it from frozen, too.

I will make fresh coconut milk it when it really counts

How do you make it?

Peel a coconut. If you want a method that is mostly hands off, first poke a hole in the eyes to drain out the water. Then put the coconut in a 400 degree oven until it cracks, which is 15-20 minutes. Or hold the coconut over an open flame and turn it to get it to crack. Otherwise, do what most people do here: machete.

If you like, peel the brown skin. I don’t tend to, but if you want a whiter coconut milk, you can.
Chop it up or grate it and blend with warm water. You need about 1 cup, though coconuts vary in size so you decide how much water. Strain over cheesecloth or nut milk bag and press to get all the milk. Put the coconut back in the blender and add 1.5 cups of water for the second press aka “light coconut milk”. Repeat straining and squeezing. Depending on who you ask, this varies. Some people use a lot more water for the second press. Ultimately you can taste and decide how much water you want to add.

Thanks. Do you know how long it keeps in fridge? And does it freeze well?

I always make it to use the same day, so I don’t know, though canned coconut milk doesn’t hold up well in my experience. I just freeze the coconut itself if I don’t need a whole coconut’s worth of milk. And any leftover coconut milk, including canned, I like to make into coconut limeade/lemonade since usually what’s left isn’t enough to make that many things.

I made it once on a small island in the Cook Islands, and it is a PITA.

I buy it in the box containers, like stocks. Yes, there can be a difference between brands–you just have to find one you like.

I have no idea how long homemade lasts under refrigeration, but it has to be shorter than the Pasteurized versions, which once opened I’ve had last a couple of weeks,

The only one that I’ll use apart from homemade is Cha’s. Very rich and tastes great. Costco carries it.