I stole the title of the thread from elsewhere (I’m not going to tell you where). It was, and is, a thread with a lot of good information but I thought we should add to it here rather than there. I’m expecting to hit the road soon for a couple of these mini road trips - I desperately need to get out of the city - so I might have more to add soon.

I have two additions right now, the first one I’ve actually never been to, though. I saw this on the Texas Bucket List TV show and had to put it on my list - Fossati’s Delicatessen in Victoria. Founded in 1882 it claims to be the oldest deli in Texas. Nothing to make Ziggy Gruber nervous about the competition, perhaps, but looks like a fun stop (on the National Register of Historic Places and I’m a history buff) and, anyway, I don’t know of anything else at all in Victoria.

The second one I didn’t even have to leave the city limits for - Taco Palenque on Woodridge in the Gulfgate area. I saw a recent article about it and was intrigued enough, and needing some redemption from a mediocre Tex-Mex experience with my seniors group, that I headed over. I also searched for it on Chowhound and it’s been mentioned favorably several times over there on threads about South Texas but never caught my attention.

Okay, so it’s fast food and a chain, but as the article says, it’s a very good chain (and not all that fast). The article warns you might have trouble if you don’t speak Spanish and I was shocked to find out that applied to me. I typically don’t have much trouble ordering at a taqueria or taco truck but I did here. The problem turned out to be that the first item I ordered, the tostada, comes with choice of beef or chicken but that was not indicated on the menu board. So while I was moving on, trying to order a guisada taco, the counter girl was asking ‘beef or chicken’ and I didn’t know why and she turned to ask another worker if they could put guisado on a tostada. We finally got it straightened out.

The salsa bar has at least 10 choices, I don’t remember the name of the one I chose but it was good. You help youself to unlimited chips. There’s queso (I neglected to try it), and a very flowable guacamole, plus all the fixings for tacos (cibolla y cilantro or lettuce and tomato if you want to go gringo style).

According to the website they’ve got lots of locations all over South Texas so if you’re on the road and needing sustenance and don’t have any info on the local taquerias, taco trucks, or Italian joints, etc., this is good alternative.

I saw that episode and thought it looked more like a cafe than a deli, but it looked fun. Shane McAullife often finds little town gems. If you head west to Austin, try to stop in to Noble Sandwich Company. I reccommend the Noble Pig. They also serve breakfast. Outstanding food.

I’ve eaten at Benno’s and Truth, never even heard of the two in Livingston but have been hearing of the one in Needville. Day trip? Needville? I drive that far for lunch sometimes without leaving the city limits.

I’ve been to Florida’s on several occasions. They are not kidding that the portions are huge. Lately people on Yelp have been complaining that they have stopped table service and it is counter order now, but I haven’t been there in a couple of months.

I must have driven by the hitch n post many times, but have never noticed it. I’ll have to look for that one. We go that way quite a bit.

I stopped in at the quirky Hitch N Post in Livingston, named one of the 50 best bbq places in the world by Texas Monthly in 2013.

I got the 2 meat plate with brisket and sausage. The brisket was nicely smoked but the pieces had some gristle. The sausage was unappetizing, a bland, soft sausage that manages to taste like a hot dog. The sides every plate gets are potato salad and beans and both were very good.

Not the best in the world, but ok. I was told the burgers are great so I’ll try that next visit. The onion rings are pretty outstanding. Seating is on a mostly covered porch crowded with “stuff” or small windowless air conditioned room. Order at a walk up window. 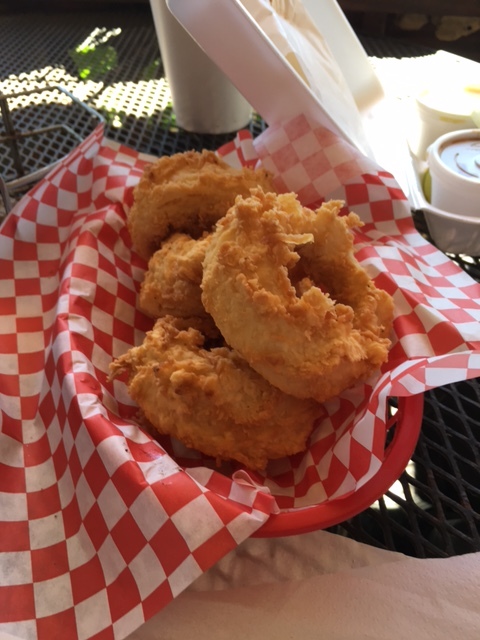 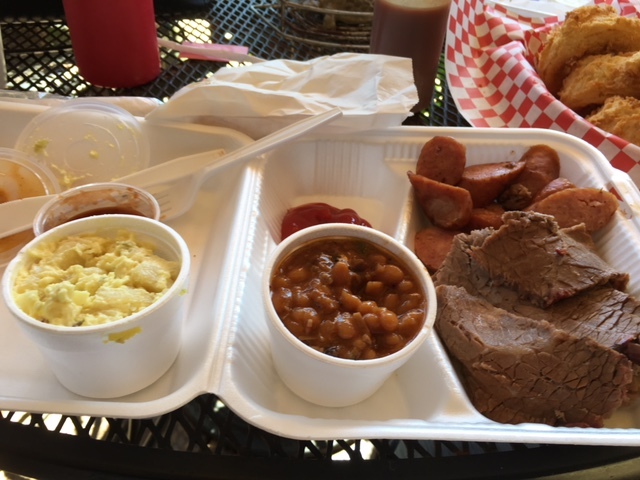 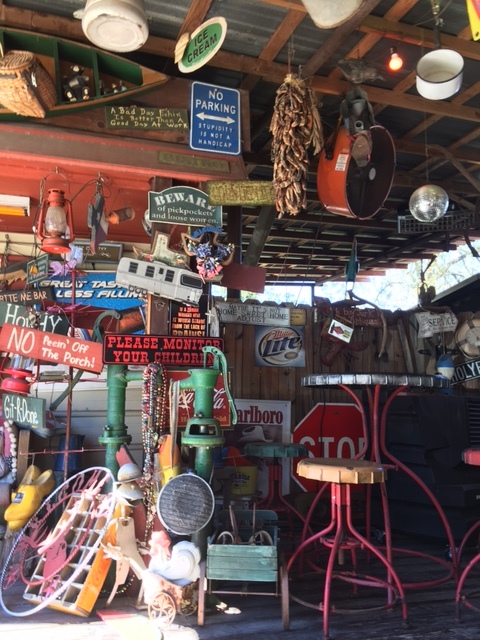 Those onion rings look like they’d be worth the round trip by themselves. Hmmm. Where can I go for some good onion rings???

Heading out of town a couple of weeks ago now I had a bag full of TJ’s snacks and a bag full of fruit and a cooler with drinks, but I got hungry early the first morning for something hot so I stopped at the Chappell Hill Bakery and Deli on 290 in CH.

I got a huge cream cheese kolache and I’m thinking now I remember it was iced. Nothing special except the size, which was too much.

Also got a sausage, cheese, and jalapeno kolache/klobasnek. A half section of a very good sausage, of course, the cheese tasted like cheddar rather than American and the jalapeno bits actually had some heat. Would have been excellent except for the soft, squishy bread part.

Very busy, large place with lots of tables. I think they serve breakfast plates, too.

There are better kolache shops but I only know about the ones along I-10 or 90, west of town, I don’t really know of any good ones up that way.

Good onion rings are hard to find. I don’t know of any in Houston.

They’re easy to make and I use the same Paula Deen recipe I use to fry cod.

Get a good, very cold beer like Modelo Especial. Sift in 1 1/2 cups flour, whisk and ad some Cajun seasonings. Dip sliced onions in the batter, roll in flour with more seasonings and fry. Delicious. A plus if you can get fresh onions from the Valley.

I saw another episode last night featuring a crazy grocery store in McAllen, Ruben’s, and Svantes, in Round Rock.

When they said Svantes is run by the descendants of the first Swede to set foot in Texas, my ears perked up (I’m one quarter Swedish). Hey, they even have Swedish Pancakes on the Sunday Brunch Menu.

I have no plans to go to McAllen anytime soon but I’ll be checking out Svantes next time I’m up that way.

They’re easy to make and I use the same Paula Deen recipe I use to fry cod.

Get a good, very cold beer like Modelo Especial. Sift in 1 1/2 cups flour, whisk and ad some Cajun seasonings. Dip sliced onions in the batter, roll in flour with more seasonings and fry. Delicious. A plus if you can get fresh onions from the Valley.

I noticed the onion rings on this burger at Union Kitchen - they don’t look too shabby.

Maybe Doobie can give us a review?

Is anyone else annoyed with all the new neighborhood acronyms? I don’t even know what GOOF is except annoying.

Is anyone else annoyed with all the new neighborhood acronyms? I don’t even know what GOOF is except annoying.

P.S. I too find that acronym over-usage to be annoying and just a little too precious and self important.

I remember when EaDo started appearing on another forum - there were wails of protestation and NEVER! But that one seems to have stuck. SoDo hasn’t though, not so much anyway. I don’t mind EaDo - East End was already taken after all.

I think EaDo and SoDo were thought up by developers with the big loft and mid-rise living projects in those gentrifying neighborhoods, but GOOF probably just owes it’s origins to the texting and tweeting generation. Gentrification there is more young families/millenials buying single family homes to re-muddle or re-model, not even tear downs for McMansions, as I understand it.

I think that is the case generally. But I’m not of that generation and when I see a news article referirng quite seriously to the POTUS, FLOTUS and SCOTUS, my teeth grind. Is it just that hard to type it out? It actually may be since typing is no longer taught either and these folks are stabbing a key pad with index fingers.

As to HTH, no idea. His Terrific Highness?

His Terrific Highness has to be it.

As to HTH, no idea. His Terrific Highness?

Actually “HTH” is “Hope This Helps”, but I admit that I like the way y’all think!

Finally made it to the famous Ray’s Drive-In in Lufkin, est November 1959.

You can bet I’ll return when in or near Lufkin.

Dine in restaurant remodeled in 2014, service was fast and friendly for us, I loved the rings she found meh. 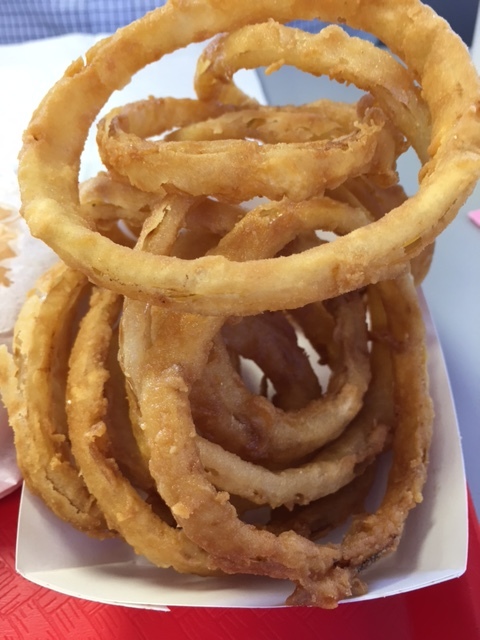 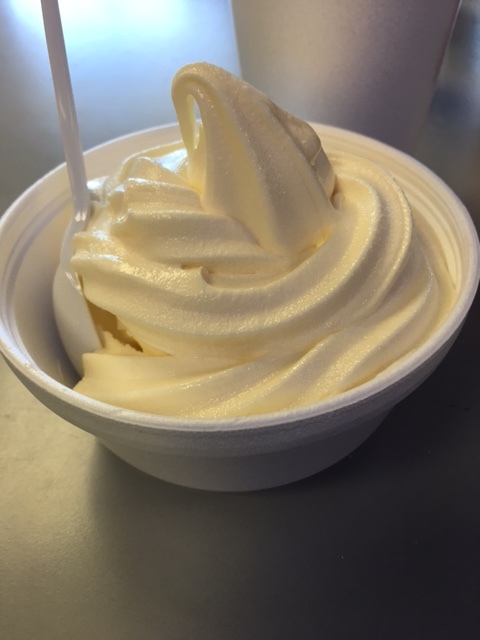