I just wonder if his low tolerance for spicy food will be an impediment to cooking authentic ethnic cuisines. 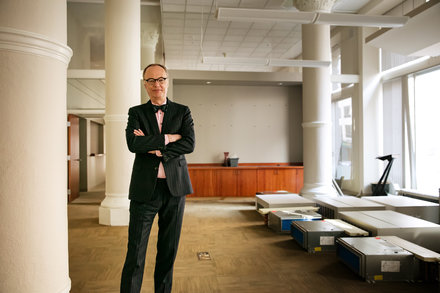 Why Christopher Kimball Is Moving On From America’s Test Kitchen

After leaving the recipe-testing empire last fall, he is starting a new venture focused on cooking methods from around the world.

Interesting article. Corby Kummer was vaguely disparaging. The comments are even more interesting.

I have to agree with many of the comments about the ridiculousness of having to pay a premium to access online content; as a Cooks Illustrated subscriber, I would certainly expect to be able to read the content in the print edition on their website. But no, you’re forced to pay twice.

Same is true of Consumer Reports. I dropped my subscription in protest. Now, however, I do subscribe to the online version only since our major appliances have started dying at a rapid rate.

Same is true of Consumer Reports

Check your local library. Ours gives us access to CR online and, of course, has print issues in the library.

Perhaps I’m just a cynical old coot, but as someone who was born West of the Mississippi, and kept heading further that way, few things are less interesting than an uptight New Englander blathering on about
his world view of food.

I’ve never lived a day west of the Mississippi, but I’m with you.

few things are less interesting than an uptight New Englander blathering on about his world view of food.

That’s actually called out in the article; they mention that while his writing and editing is well respected, on camera as a host, he comes off as elitist, uptight, and easily annoyed. I have no interest in the BS arguments about “cultural appropriation”, but his views on food are mostly informed by rural Vermont. His new venture is part of his proclaimed “wider view on food”, looking beyond western-style cooking, but it seems a bit late in his career to try to reinvent his image.

Chris Kimball is not a Vermonter, he just plays one on TV. He was born/raised in NYCity, and summered in Rupert, Vermont as a child. Now, he has a house in MA and VT. He was a deadhead back in the day, following the Grateful Dead in a VW bus.

I find his approach to food boring. As he has often said, he is more interested when developing recipes, in being able to recreate exactly every single time, at the price of all other attributes. When I see him in person, he looks completely and totally exhausted and irritated each and every time.

His approach is great for beginning cooks since, in fact, his recipes [well not his, the Test Kitchen’s] are well documented and produce food that tastes like the title of the dish. We shall see what he comes up with, but isn’t the bar pretty low?

Well I was never such a big fan of CK’s persona, but I did respect the methodology that ATK brought to the kitchen, testing various techniques in search of the best results. I would never discount the value of creative flair in the kitchen, but both approaches have their value.

Yes, and broadcast from the Dirigible christened “Ego”…

I was okay with his presence on camera, but that first page editorial crap was the only part of Cook’s Illustrated I routinely skipped. The turn to global cuisine is interesting- I have noticed that some of the CI recipes I turn to the most often are their recreations of Asian dishes. The Thai chicken with basil and the pork lo mein and the pad kee mao (which is called Thai street noodles or somesuch) are really excellent recipes which I would not have been able to produce on my own.

If you’re interested in cooking Thai food, I highly recommend Hot Thai Kitchen on YouTube, as well as her own blog.

Thanks! will give it a try

When Dan Goldberg was publishing “The Curmudgeon’s Home Companion,” he used to refer occasionally to “Chris Kimball’s reality problem,” which I thought pretty much summed it up. Thing is, people who think that only that which can be quantified is real simply don’t understand what reality is. I used to get Kimball’s “Letters from Vermont,” wherein he would wax more or less poetic about hunting rabbits and tapping maple trees and doing stuff in the snow, and it was all kinda pretty in a post-cardy kind of way, but it always had the ring of being spun by someone who thought he’d figured out this sincerity thing and how to fake it.

But, as they always say just before you’re escorted to your car, we wish you the best of luck on your future endeavors. Sincerely.

Here’s the publicity roll-out for “Milk Street Kitchen”. http://www.milkstreetkitchen.com/
From its FB material, it appears that he is milking the CI/ATK format, without substantial difference.
There will be a PBS show starting in the fall of 2017. It will come as no surprise to those who’ve experienced the purgatory of CI subscription that posts on FB complain that the online sign-up for the new magazine isn’t working.

I find his approach to food boring. As he has often said, he is more interested when developing recipes, in being able to recreate exactly every single time, at the price of all other attributes.

I so agree. And when I watch the show I feel more like I’m watching a science program than a cooking show.

In direct contrast to Good Eats, which was similarly heavy on science, but actually fun to watch.

I wish he had rested on those laurels.
Cutthroat Kitchen is one of those shows that makes me glad I No longer have cable.

I don’t know who he sold his soul to…but he always just looks pained on the few minutes of Cutthroat that I’ve ever managed to make myself watch.

I’m hoping it was some contractual obligation that he hates but has to deal with.