I love the taste of shrimp but recently my last number of shrimp purchases have left me disappointed. They are frequently tasting either entirely bland, or kind of “fishy” and old. This is so despite my getting them from Whole Foods or our local coop, which has more nicely sourced proteins than what you’d find at the average grocery. So what is the trick to shopping shrimp? Frozen v fresh, farmed v wild, large v small, from certain parts of the world? Times of year? Some type of pre-prep like soaking or marinating? (I’ve tried soaking in milk and salt water). I thought if it was high quality, I wouldn’t need to jump through those hoops… I’m in the Seattle ish area by the way, closer to the border though. I’m just looking for a firm, fresh, sweet tasting flesh. Thanks all.

I tend to despise frozen fish, but I always use frozen shrimp when making shrimp cakes. They are cheaper than crab cakes and so delicious. I find that when baking them, the shrimp flavor comes out. Yet, if I am making a sautee dish such as scampi or an Indian dish like a curry or korma, I will only use fresh.

It doesn’t really answer your question, just sharing my experiences from NJ (and none of the shrimp Shop Rite sells seems to be from the US anyway).

Great question. I have gone through this dilemma. Tried every kind from reputable mongers . There is no taste , and its disgusting when you get the ammonia taste . I have pretty much thrown the towel in . California coast. I can’t stand the ones shipped from Asia. I have switched to mussels and clams .

Recently my local Sprouts store has had frozen unshelled IQF wild shrimp from the Texas gulf area. They had more flavor to us…

Shrimp or prawn? I have very reliable experience buying tiger prawn from a good seafood shop in SF. He supplies restaurants as well as this retail outlet. Very good average prices. I also have had good luck at Cosco and Grocery Outlet with 16-20 count frozen prawns. Surprisingly, I am somewhat afraid of buying fresh domestic prawns from my carriage trade fishmonger on whom I depend for all other fish and seafood. Frozen or recently defrosted frozen can be fresher than “fresh” product.

Mrs. P always gets the Kirkland raw tail on frozen shrimp from Costco. It’s very good. She just made a blackened shrimp salad during the week with these shrimp. They are very flavorful. 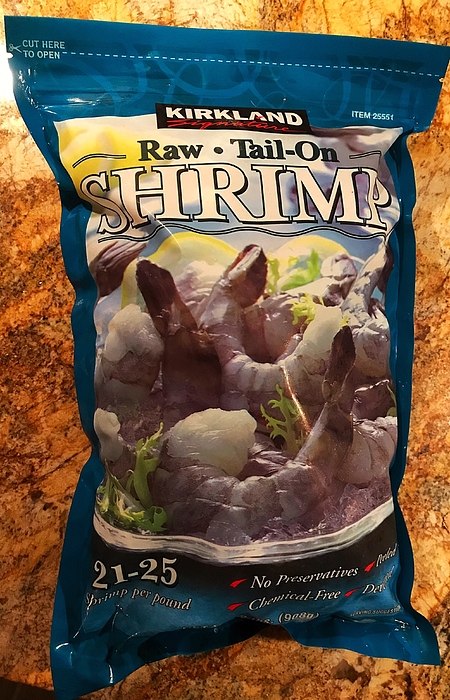 That’s what we use as well. No complaints.

Thank you - may well give it a try since it is readily available.

You’re welcome. Let me know how you like them.

Ditto frozen from Costco. Defrost what you need. I’m told what what most of us buy was frozen and defrosted before we buy it.

West-central Florida still has a thriving shrimp fishery, so I do my best to buy fresh wild Gulf shrimp. They’re all flash-frozen on the boat now, but its liquid nitrogen, so its instantaneous and doesn’t damage the shrimp.

Head-on is best (leave the heads on while you cook them!) But those are hard to find unless you go to the dock.

So my shopping list is (in order)…if I cant get my wish, I drop down the list
Off the boat (challenging even for me)
Head-on
Gulf
US
Wild

I will buy imported if I cant find the others, but I do my best to not take money from my neighbors’ pockets.

I had always bought farm raised shrimp available at Costco in 5 lb bags. Since 2012, when I became widowed, my son came to live with me most of the time although his business is still in Amsterdam with internet and cell being much ore efficient. He will not eat those farm raised sea food and our local Costco does carry wild shrimp but only when they have a road show. So I had to travel to Jessup at the seafood strip ( about 65 minutes away) for wild gulf shrimp which can be purchased fresh or frozen. That was cumbersome to say the least, as they only cater to restaurants and are only open for 2:00AM to 10:00AM. I would stock 30 lbs each time I go until I discovered Red Argentina Patagonia shrimp) Wild caught in the icy cold pristine waters of the southern Atlantic Ocean in Patagonia, Argentina -The pure waters and nutrient rich ecosystem result
in the shrimp’s bright red color, sweet flavor and tender texture

Let me know . I googled, there is a HT opened recently at Seattle.

I love head on shrimp especially when they re the huge prawns. The head are rather tasty. However, may son and most of his friends dislike them. I usually will buy a few if I have plans to cook paella and add a few on top and will ask my son and his friends to pass the heads to me but he dislike the idea of my asking. his friends. So, not wanting to offend his friends I just stop doing that .
One of my favorite dish, a recipe from my mother is with head on large prawns is to cut them in thirds with the shell and head on, marinade them with soy sauce, cider vinegar, garlic, five spice powder, rice wine then, I would reserve the marinade, deep fry the prawns after dusting them with sweet potato starch. They should come out crunchy. Then, I would discard the oil, place the fried shrimp marinade back into a wok for just a few minutes, ( just to cook the marinade but still have a little left as the marinade would make the shell tasty to slurp with and the head, can be so tasty not just to suck the juice out but also can be crunchy enough to eat). I will them finely chop some poblano or hot peppers to sprinkle as garnish on top of the dish.
One of the restaurants in DC used to cook this dish as well. My husband had learned to love it and would even eat the shells like me if they are crunchy enough.

I believe these are farm raised. Costco’s shrimp in my area are only wild when they have a roadshow.
Try the Argentina Patagonia wild red shrimp. Google them
They taste like lobster unless they are overcooked.
Just a few minutes , stir fry
When I use them for Cataplana which usually takes 7-9 minutes, I add the shrimp frozen.
I am sure Mrs. P would like it.

2 months ago , I saw some frozen vacuum packed fish called wild red drum fish for $3.99/lb at the Italian Grocery store I frequent. There was a big sign saying it taste like Red snapper. I googled since I am not familiar with this fish. I bought 3 packages. Apparently, it was one of Paul Prudhomme’s favorite , that he sold tons of spice for this fish in the 60’s. So, I bought a few packages, each of them just under one lb. I followed PP 's recipe which was good but there was too much butter for my taste, so I baked them with olive oil, for around 10 minutes or so, then added crab meat with spices, another 10 minutes. It came out really good.
I went back to the store and bought another 10 packages . Tried it fish and chips , British style, really really good. Then, tried it in tamarind soup instead of Costco’s farmed tilapia ( the only farmed fish my son will eat as there is a very good review that it is farmed but raised in a huge cage somewhere in an ocean with no antibiotics and that it is really like wild fish) . Tamarind soup is great if you like sour hot tasting soup served with rice. I buy the Mama Sita’s packages from Asian store( Knorr’s carry the exact item, probably purchased the rights from Mama Sita which is made of tamarind as base). I add tomatoes, either Ong Chay or spinach, more vinegar and hot pepper and crush a slice of ginger. Sometimes I would add shrimp to it as well.
Anyway, I saw the owner of Nick’s who told me that he. had such a fantastic buy from the seafood market in Jessup, he loaded up.He is not sure if this is. just a one time deal I have since gone and bought 20 more packages. They are really great at that price.
I have not served them steamed Chinese style as I only use fresh snapper, rockfish or better, flukes. Maybe I will try one of these days as I still have around 10 packages in my freezer, having given 3 packages away as gift.

Greg, shoprite often has wild NON frozen white shrimp from Ecuador. Apparently this country has really ramped up exportation of shrimp over the last few years.

I meant to reply 7 hours ago re my shrimp experience . Pls read as I think you will be very happy with the red Argentina PatagSasha onia shrimp. The price is reasonable and they do taste like lobster.

Those Argentine red shrimp area real find. I don’t think they taste like lobster, though. Price was so attractive I hesitated to buy them. As you said, do not overcook!

Buy the patagonia argentina wild caught red shrimp frozen deveined in 2# bags at QFC they go on sale every month for $5.99/# with QFC card. They are large and delish but do not taste like lobster.