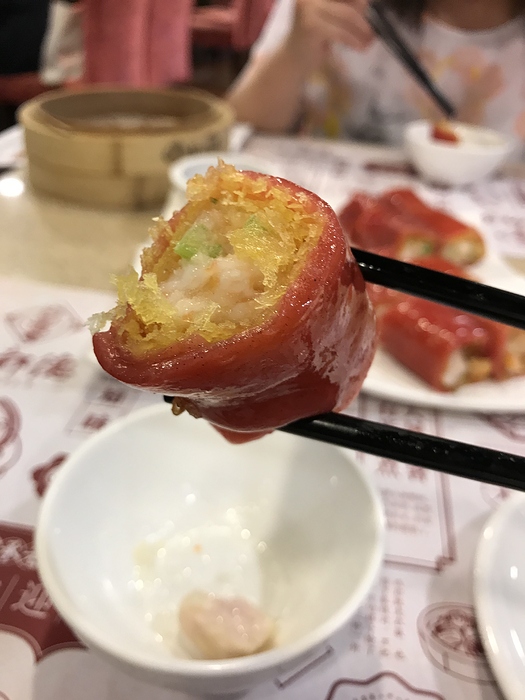 Those? Reminds me of the fish one at Dragon Beaux or at Koi. I remember eating one that’s not red in Sacramento actually. I’m kinda glad that SF hasn’t fallen off the cliff in terms of new items.

The cheung fun looks good! I’m glad to see that they do the wrap rather than scrunch it up. I was passing by in NYC and saw a few of the rice noodle carts and it just looks messy haha. Dunno, I always thought the wrapping of the rice noodles involves just a little more skill. I don’t really see the egg cheung fun around here though. Are there good places in the bay?

I can’t read Chinese, so couldn’t learn what is new and exciting.

Ha, I can read mountain, heart, and beef lol. I was thinking of anything you caught being eaten at another table.

But appreciating the journey you’re having in Guangzhou. Did you get any double boiled soups?

I don’t really see the egg cheung fun around here though. Are there good places in the bay?

Never seen or ate egg cheung Fun in the USA. First time was last year in Taiwan. Seems to be available everywhere we’ve visited on this China trip. My wife thinks that the version we had in Taiwan was copied from the mainland.

No double boiled soup yet. We’ve been eating many of our meals at tiny humble shops. We did eat at a great hot pot restaurant tonight. Will post about our meal later. 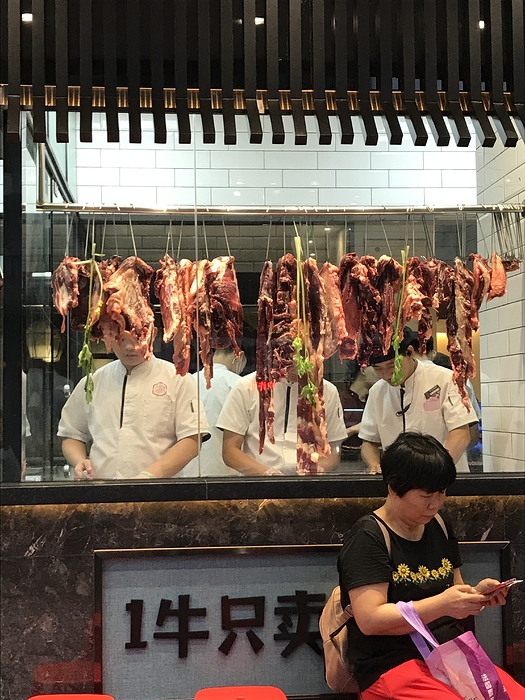 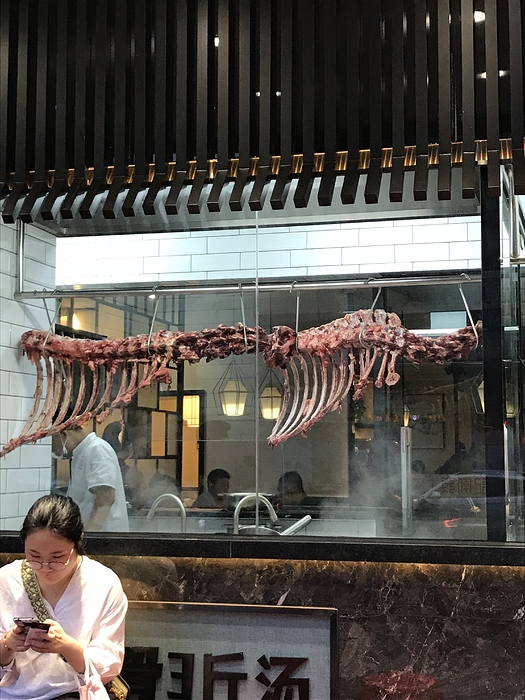 Come to think of it, have not had any pork since we’ve been here.

Meaning the dim sum you had, they didn’t have pork?

Meaning the dim sum you had, they didn’t have pork?

I meant that we didn’t have any meals where Pork was the primary protein. Though that’s not what I wrote,

In response to @Night07 inquiry about current pork prices in China. Took some snaps at a Carrefour. A single sample, not representative of the entire market. 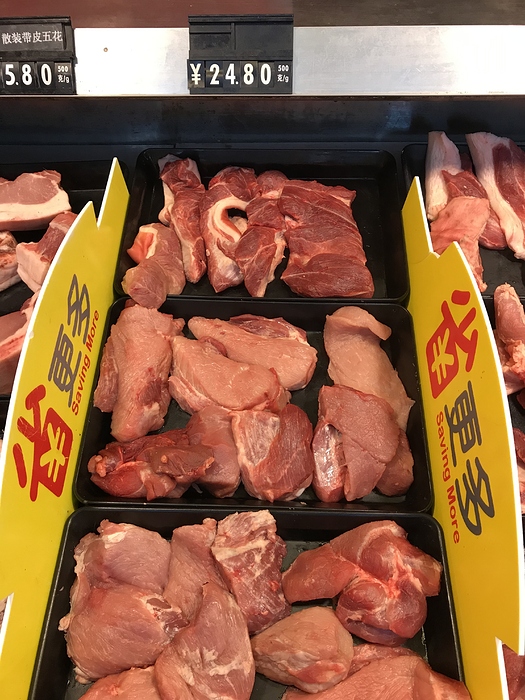 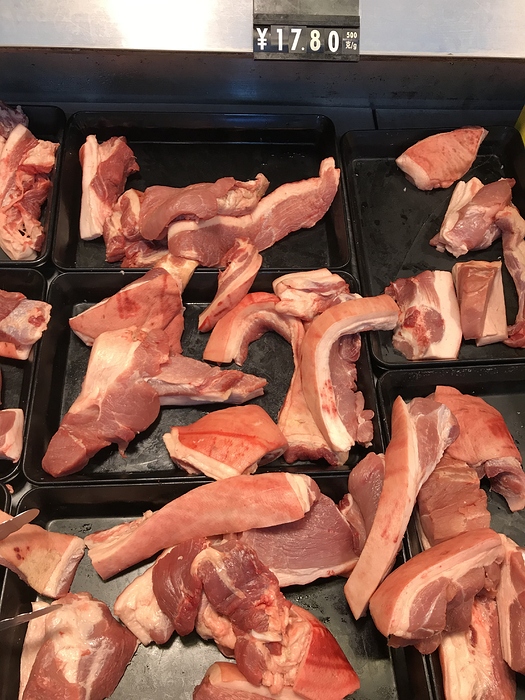 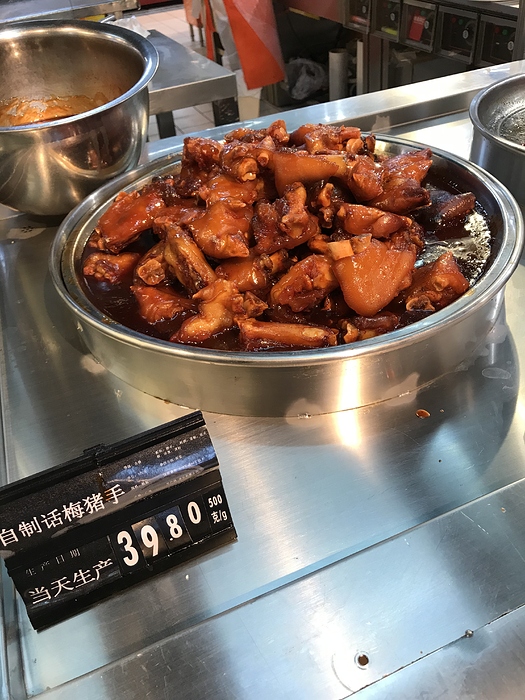 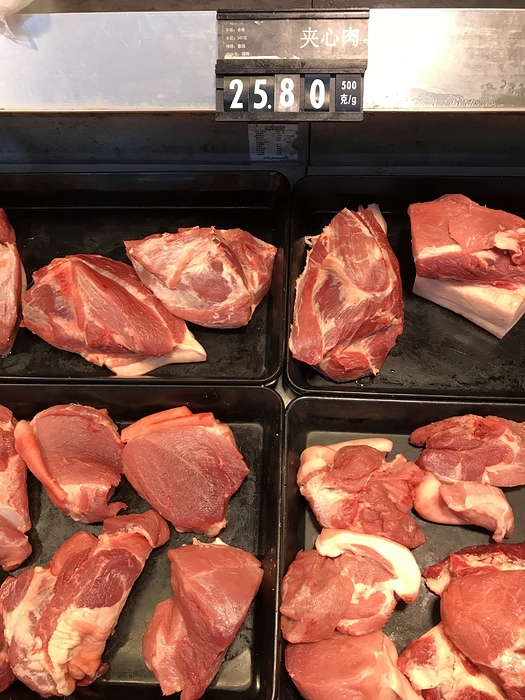 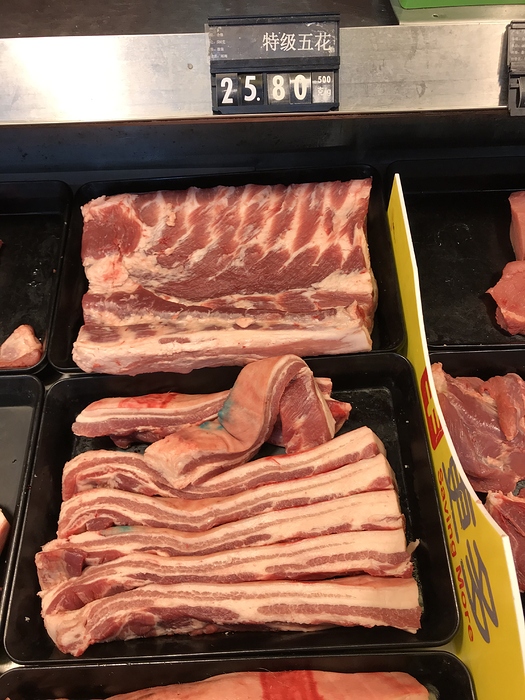 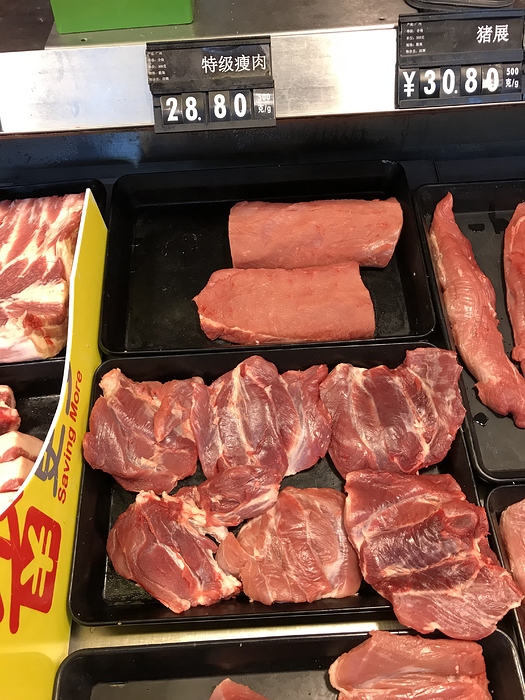 Last dinner in Guangzhou and Mainland. Had to be Hot Pot.

Chuanji Chaofa. We were impressed with just about everything. From the efficient courteous staff, the smart layout, impressive open meat cutting display, reasonable prices and selection. 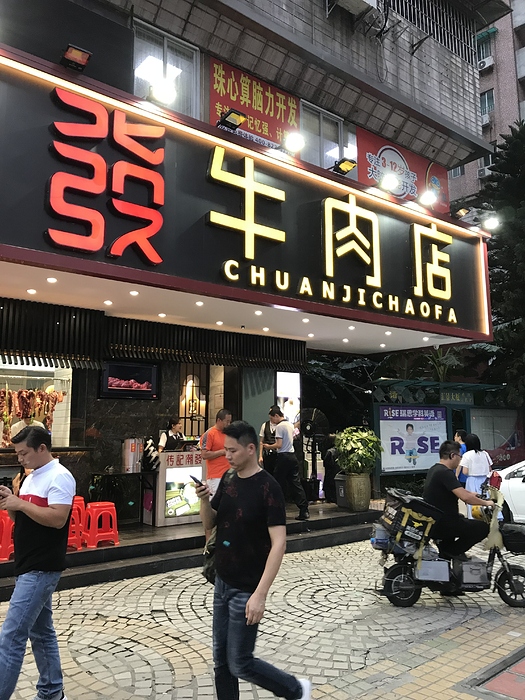 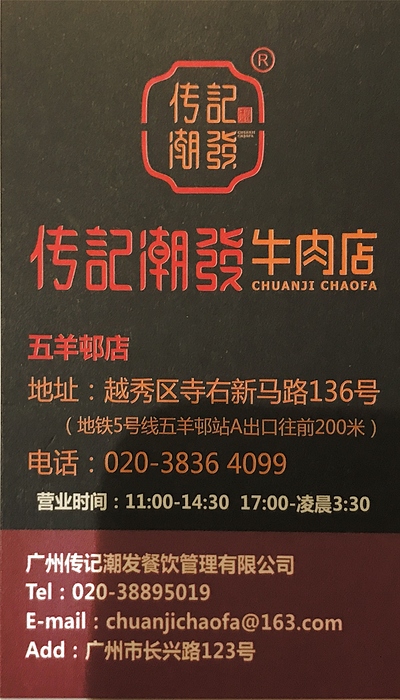 Started with some corn, radish and Beef brisket to tenderize and infuse the soup. The rice noodles usually added towards end of the meal. 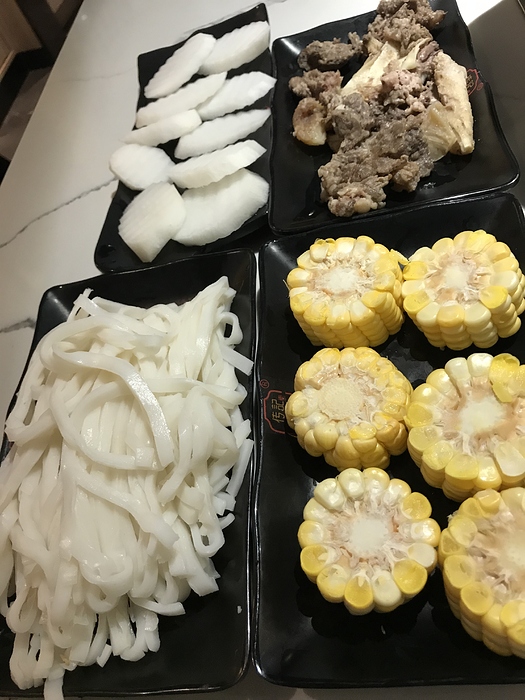 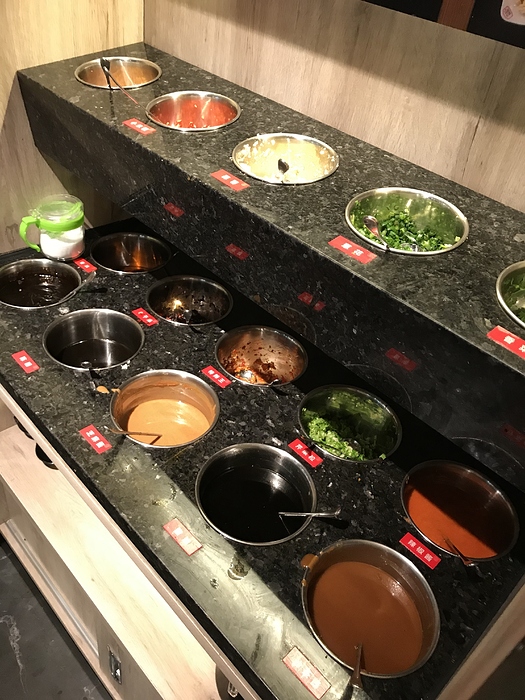 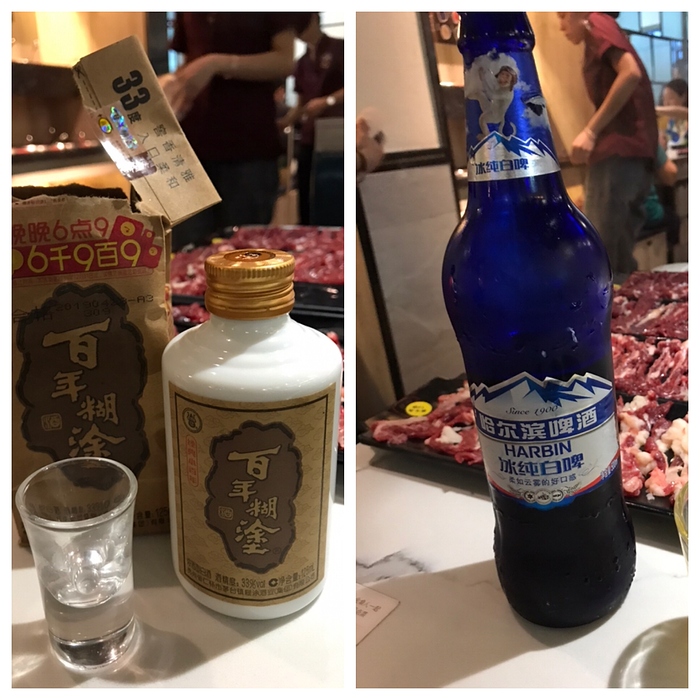 My wife ordered the dinner set for four (for the two of us) plus a few supplements. Each plate of meat had a dime sized tag designating the cut, an suggested dipping time. 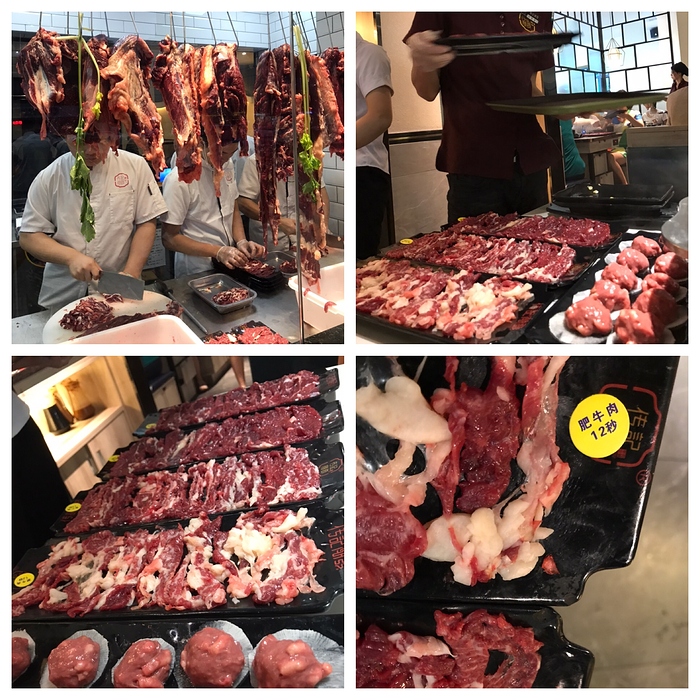 There was a bowl of slightly bitterr romaine like Vegetable. A serving of dried fujook (bean curd skin) to soak up the broth. Nice meal. 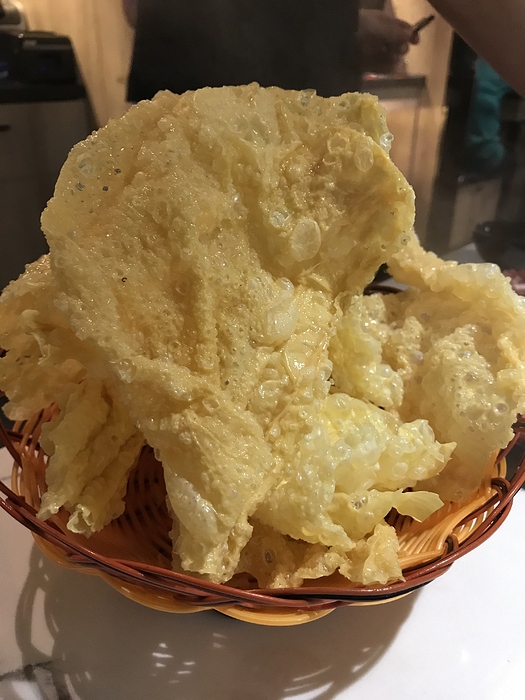 … >_> why substitute when you can buy the real thing! I saw one swimming about at Grand Harbour this weekend.

Price? I was more looking for shops that sell them so I can steam at home though.

Oh nice, was afraid of porkageddon.

Each plate of meat had a dime sized tag designating the cut, an suggested dipping time.

Honestly, that’s just brilliant. I think most of the time I just overcook everything in hot pot cause I’m paranoid or its lost somewhere in the bubbling cauldron…

But 45 bucks for two? With that much food? Steal!

Price? I was more looking for shops that sell them so I can steam at home though.

Ah ha ha… … I didn’t want to ask the price of that fish due to sticker shock lol. But no, I can’t think of any easily accessible fish at the market that has the same textural qualities as the coral trout.

But 45 bucks for two? With that much food? Steal!

No worries on over cooking. We just shabu shabu quickly and eat our hot pot meats pretty rare.

Food quality and prices are way beyond our expectations. We’ve decided we will explore China more often. Hotels, food are more than reasonable. Taxi fare is downright cheap, no need to take public transport.

Food quality and prices are way beyond our expectations. We’ve decided we will explore China more often. Hotels, food are more than reasonable. Taxi fare is downright cheap, no need to take public transport.

How does it compare to Taiwan? I recall Taipei to be relatively inexpensive as well

How does it compare to Taiwan? I recall Taipei to be relatively inexpensive as well

We’ve found Taipei to not be a particularly inexpensive visit. Cheaper than USA, sure. But certain meals and hotels could be 2~3x what we paid these last two weeks.

Granted, Kaohsiung or Tainan could be 30% cheaper than Taipei. Still more than China. I’ll throw up some meals with prices at various locales to give an apples to apples comparison.

Nice always cool to see price comparisons between cities and somewhat similar cuisines! Thanks for all the info and safe travels

Original plan was to to end up with five days in Hong Kong.

Wife not too fond of tear gas, water cannons or beat downs by black and white shirts.

Had to divert to Macao. Oh well. 4th installment from the Venetian 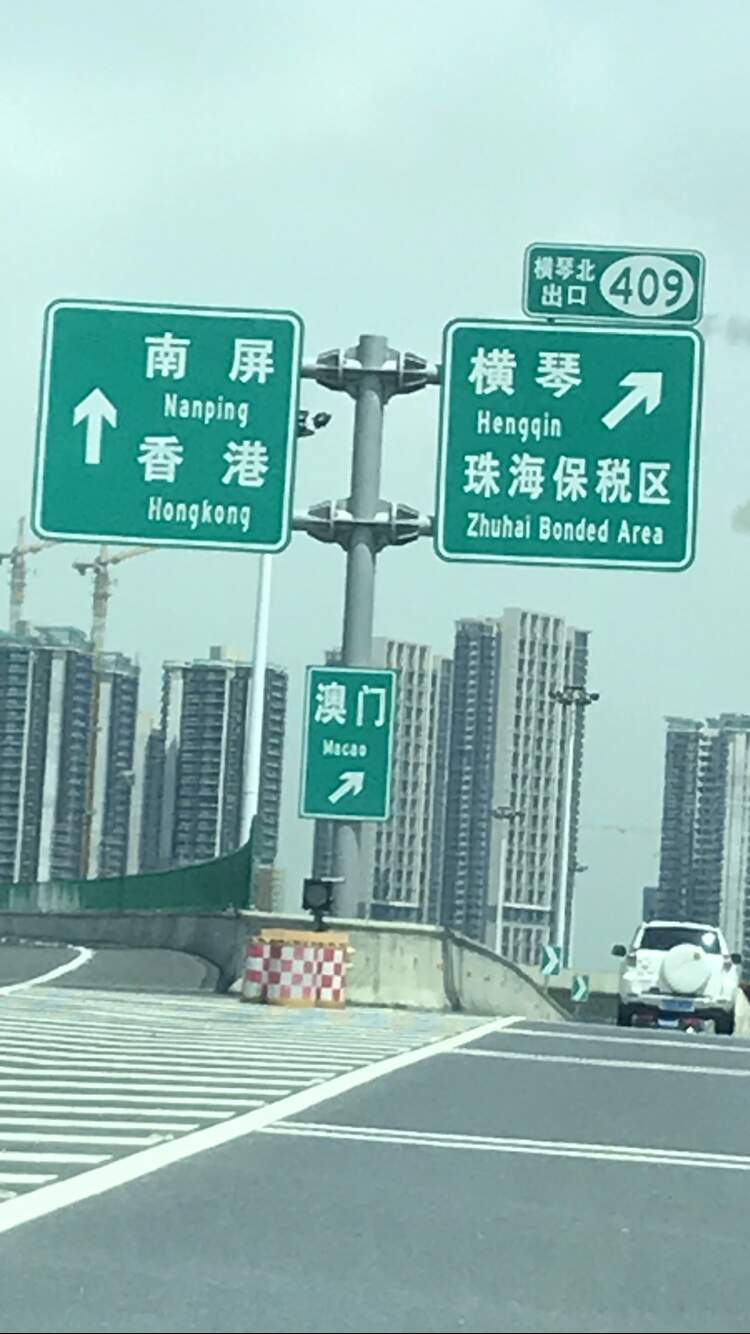 Wife not too fond of tear gas, water cannons or beat downs by black and white shirts.

Hasn’t the announcement of the formal withdrawal of the bill been talked about? Or are there still more incidents?

In any case, grab some portuguese tarts!

Or are there still more incidents? 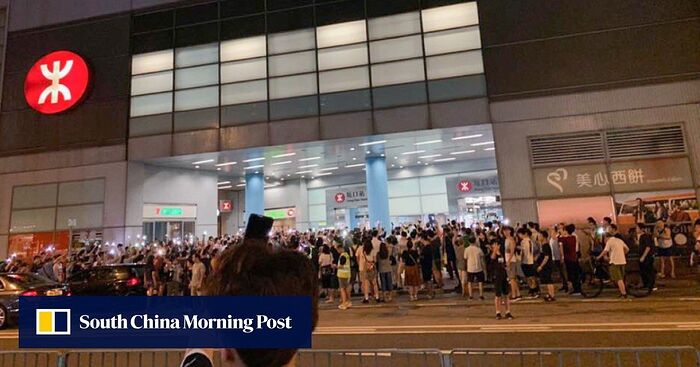 More than a hundred protesters besiege Hang Hau station on Thursday evening and start abusing police, forcing authorities to shut down a gate.

Yikes. Wife was right after all, as usual.

Lol I think I fear the police more than the protestors. 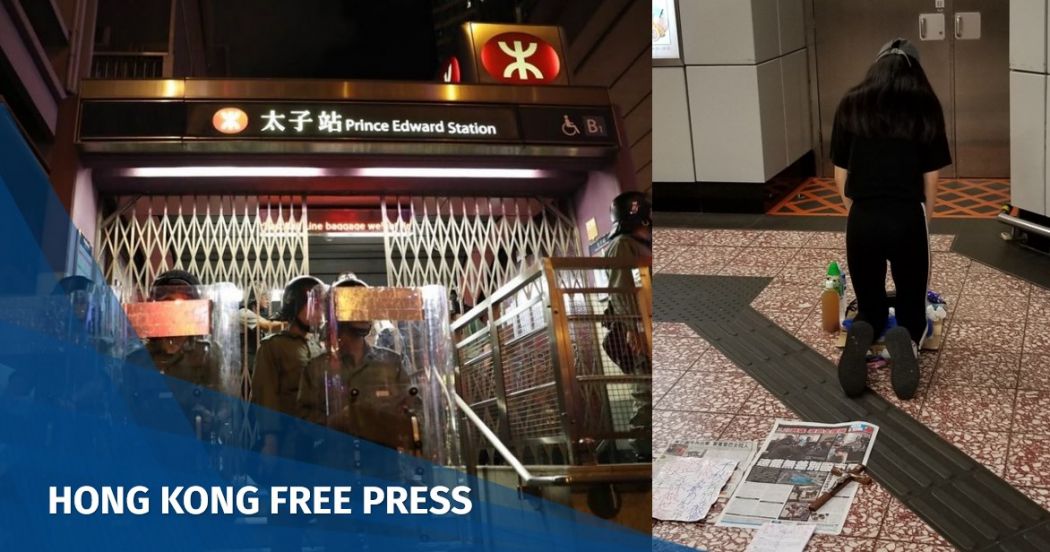 Hong Kong’s rail operator has come under increasing pressure to release CCTV footage of Prince Edward MTR station from the night of August 31, when riot police stormed the platform and trains using pepper spray and batons. On Friday, a growing crowd...

Definitely the crab congee from Wong Kun Sio Kun, and the wantan noodles from Wong Chi Kei, but we only scratched the surface where dining in Macau is concerned during our one-week holiday there last month (we spent more time at the museums and historic sites) - I think you’ll be able to find a whole host of good eats there.

The stunning variety of distinctive cuisines available in Macao - Portuguese, Chinese, Japanese, Indian and so much more - makes this international city a veritable paradise for...

Oh haha, I meant did @Google_Gourmet get some good stuff this time around? I read your reports earlier and made me want to revisit and beleaguer the fact that I can’t recall having many such options where I’m at…

Though I do recall the casinos to be rather interesting. Unlike Las Vegas where it seemed to try to cultivate more of an overall experience, Macau was seriously focused more on the gambling aspects. Has anyone tried The Eight?

Dim Sum at a classic Cantonese Yum Cha restaurant. No English name, let alone any business cards or brochures. Best I can do to placemark: Trevor James aka The Food Ranger just posted a Guanzhou video this morning. At 0.56 in, he had dim sum at this very restaurant. Trevor does a much better job presenting the food. Looks so good, looking forward to going back to Guangzhou again soon!

Hongxing Seafood Yidu Bird’s Nest & Shark’s Fin Restaurant can only be described as a seafood palace. Hongxing is located on the river walk of the Zhujiang (Pearl) River in Guangzhou. 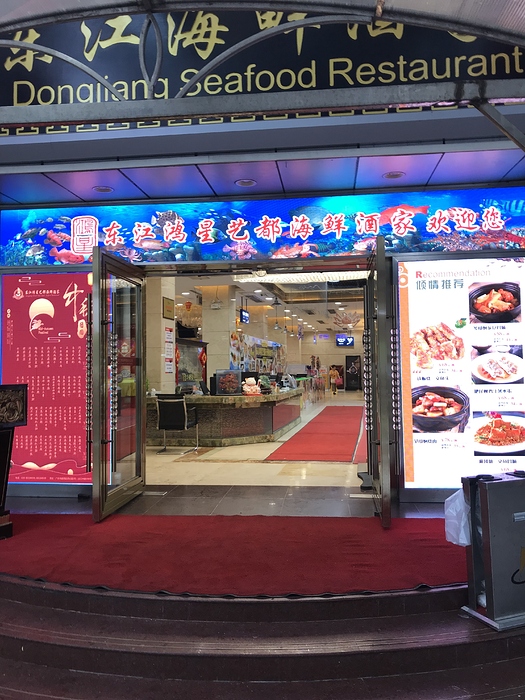 We had a memorable meal at this restaurant on the banks of the Pearl River.

One of my favorite YouTubers’, Trevor James - The Food Ranger, just did a piece on this restaurant this morning. He does a very good job showing the size, selection, service and quality of this restaurant.

This restaurant is pricier than most in Guangzhou, but the experience is well worth the splurge. Highly recommend.