Chicken Murphy has its food history handprints in my home state (NJ) but I have never tried making it from scratch.

I’m looking for a straight forward, delicious recipe to shop for and follow. My research turned up 3 diff versions, including served over pasta or egg noodles…which seemed odd given potatoes are called for in the dish.

Interesting, I have never heard of this.

The dish makes a flavorful sauce. I don’t see the point of serving it over pasta but Its easy to omit. One stovetop dish with a lid prevents dried out versions in the oven, comparing online recipes.

I’d never heard of this dish. Sounds interesting. Hope to try it soon and get back to the thread. After checking out several different recipes online think I’ll cut back back on the chicken broth and white wine to make it less soupy. Fiddle around with it a bit. No way am I serving a dish made with potatoes over pasta!

Huh. New to me, too. It sounds similar to Chicken Scarpariello, which, to my knowledge, calls for artichokes instead of bell peppers, and is mounted with butter at the end instead of being thickened with cornstarch.

Often compared but is a different dish.

I’ve never had chicken murphy with sausage. I’ve never even seen that done in NJ. Sounds great though.

I think you can wing this recipe to your taste. I think the wine and vinegar from the hot peppers are the two pronounced flavors needed (at least from my experience eating that dish in nj)

I have never made this dish but if I did, I would get the potato crispy and also the chicken (lightly flour coated.) I would then serve the veggies/sauce over the crispy items. This is obviously more labor intensive and much harder for restaurants to coordinate over chucking everything in to a single pan. Let us know if you make it.

Thanks. I’m giving it a go Sunday. We’ll see.

We made the above Epicurious recipe last night with a few changes. First, I don’t like mushrooms so left them out. Second, because I believe in being honest, I couldn’t find hot cherry peppers anywhere here so I had to get creative. Broke a large serrano in pieces and married with sweet cherry peppers/juice for a few hours. Voila. Also used red, green, orange peppers(they were smallish) and 2 cloves of garlic are plenty for us.

Nuked potatoes until almost done, browned sausage, dredged chicken and browned as directed. Used 1 c white wine but only 1/2 c pepper juice since it was a little tangier than regular hot cherry peppers. Thought I might need more wine or a splash of chicken broth to make up for less pepper juice but decided the juices from the partially cooked sausage would make up for it. Baked covered for 45 mins @ 350* then uncovered for 10 mins.

Served with crispy baked garlic bread. Unless you feel like a tossed salad this is a meal in itself. We liked it. But would I go through all that again? Probably not.

Surprisingly, the Italian sausage, potatoes and peppers were my favorite part. The chicken almost comes across as a filler food/afterthought.

Excellent and thank you for the walk through. I’m very happy the effort worked out and you enjoyed it.

Whatever adjusting you did should be expected given the way in which this dish was explained to me by my friends mother. Apparently, this is a dish built on leftovers. She explained, many a NJ Italian home cook had leftover chicken cutlets, sweet or hot sausage, potatoes, all types of garden grown peppers and even mushrooms from a weeks worth of cooking. Serving the dish over pasta was just another way to stretch the dish for a large family. Even the leftover jug of wine makes an appearance.

On Sunday, I plan to make a version for my family dinner. I’m going to use sweet sausage, red and green peppers, yukon gold baby potatoes and chunks of white meat chicken (but not breaded) in a light white wine and garlic gravy. I plan to start it on the stove and finish in the oven. Def no pasta but perhaps if the gravy comes out, some warmed Italian bread.

Again, thank you for giving this mystery dish a go.

Hey Dan,
I have 8 thighs (bone in) in the fridge to marinade, and the sausage defrosting in the fridge for tomorrow. Instead of the hot cherry peppers I pickled some of my own: Jalapeno’s sliced thin and then to soak in salt/sugar/vinegar/water bath for two days instead of the hot cherry peppers… Everything else remains the same…
I might have to adjust the final cooking time, because of the bone in thigs, versus the boneless white breast…
I will give you a review when it is done…

Awesome, Phreddy! i look forward to hearing how your version works out. 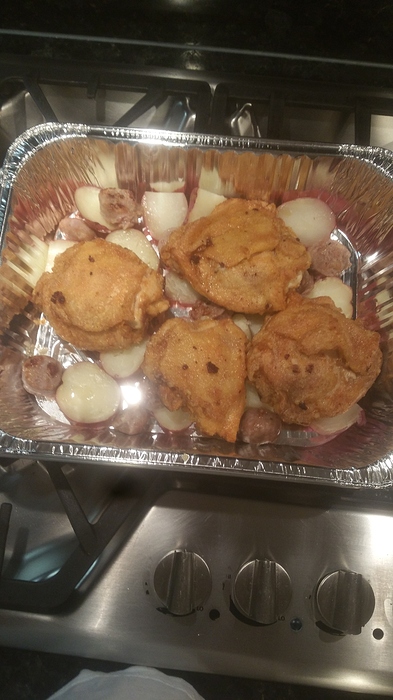 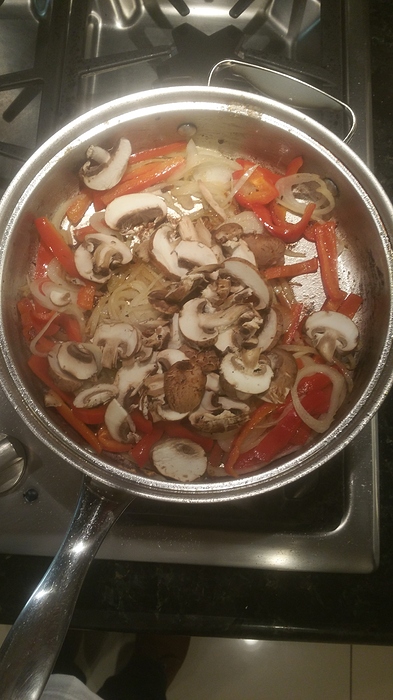 All ready for the oven. 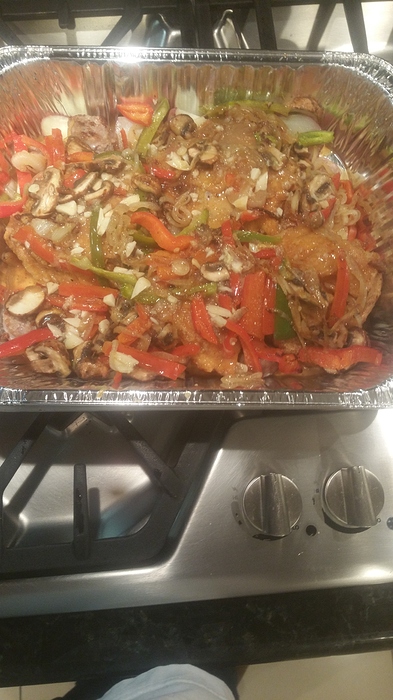 The next post will be of the plated dish! The house smells yummy!

Go Phreddy, you have gotten farther along than I have. Looking forward to your final review. The photos are spot on! 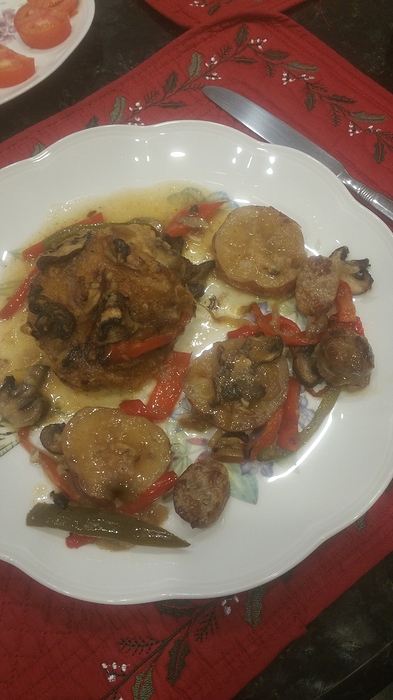 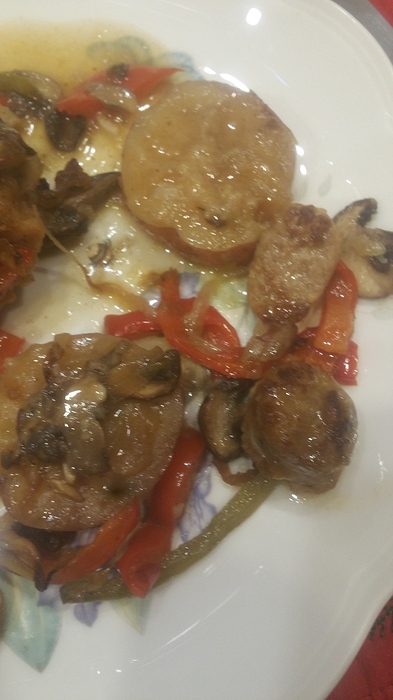 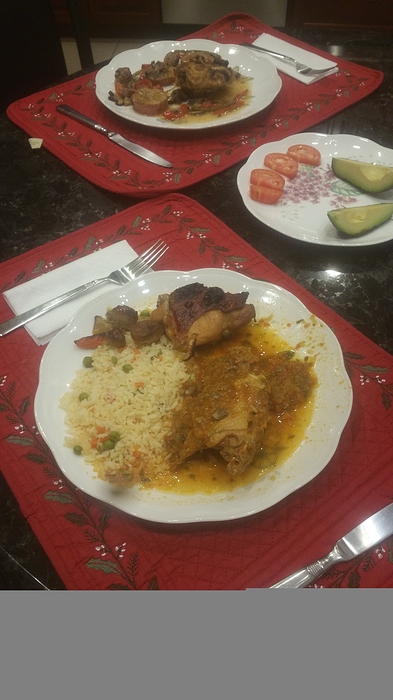 The flavors were very predictable, but perhaps of the white wine and the brine, the chicken had a real pleasant , delicious moist flavor.
Using thighs, bone it, caused the cooking process in the oven about 1 hour, and extra 15 minutes. Given all of the aromatics, the house had a wonderful aroma.
My using the jalapeño peppers that I pickled myself, really had the same heat effect as the cherry peppers. Of course if you want to amp up the heat any combination of hot peppers can be employed. I was happy with the heat level as well as the sweetness the red pepper , onions and mushrooms delivered. The potato and sausage balanced and really made a complete one pan meal.

This will be repeated on a cold, blustery day, like today, again. Glad my wife insisted making half of the 8 thighs with her stand by method and me trying the Murphy (with four pieces)…we had a good comparison. We both agreed our # 5 child would devour the Murphy…

Thank you for making the dish and I’m glad it was enjoyed. I like the changes you made. My attempt is going to be much like yours with the exception of the bone in thigh meat. I am also using sweet sausage my Aunt made this year that I’m still going through. I prefer Yukon but my friends mom uses russet. I bought frying peppers and red peppers. Your effort has me excited to give this a go.

Thanks to everyone who gave this thread a once over.