I have been getting fish from this Community Supported Fishery since the early days, and I know many of you have also but wasn’t sure if everyone knew about it or that it has moved on from the early days of only delivering whole fish. Nowadays you can get fillets in 1 or 2 pound weekly shares (freshest fish you will ever get unless you catch it yourself), as well as salmon from the Faroe Islands, prepared fish and clam chowders, fish cakes, salmon cakes and other prepared foods. They also have egg shares. The fish quality is amazing and it supports our local fishermen.

Thanks for the reminder. I’ve toyed with signing up for a long time, and your post may give me the kick-in-the-pants I need.

thanks for the reminder. I really wish they still did whole fish, however. I wonder if fish bones could be requested? I need to make fish stock…

Their website (thanks GretchenS for the link) lists fillets and whole fish, but it seems that you need to choose one or the other option. A mixed bag would serve my needs a lot better: a whole fish plus fillets every week.

You could certainly subscribe for both if that is what you wanted, or alternate whole fish and fillets in different weeks. There is a lot of flexibility now, I think they ask only that you commit to 6 out of the 8 weeks in a “season”.

wish they still did whole fish

If anyone has experience with a fillet share, I would be interested to know what you received. Did the type of fish vary from week to week, or did you mostly receive the same thing?

I do realize that the fish you’d get depends on the catch – just looking for a general sense. We have been thinking of signing up and would prefer some variety. (I should also add that one of us is not fond of bluefish or mackerel.) Thanks for any insights!

It is generally mild white fish of some sort: haddock, pollock, redfish, dabs, flounder (several varieties). Monkfish sometimes, bluefish rarely, mackerel only once that I remember and you can eliminate monkfish by going with a Kosher share and eliminate bluefish and mackerel by getting a scrombic intolerant share. Some seasons they do swordfish and offer people a chance to opt out that week if they don’t like swordfish. But basically it is mild white fish most of the time, just different varieties.

Thank you, GretchenS for this detailed info about your experience with Cape Ann Fresh Catch. The various types of whitefish and the monkfish have appeal for us. Probably going to try signing up for the next round that starts in July.

Thanks from me, too. I wrote to them, as well, and they said that they would not repeat fish more than twice a season, if you sign up for a whole season. They also do partial sign-ups mid-season, but if you do that, you might end up with a couple of repeats. I decided to risk it and signed up for the remaining 4 weeks.

If I go around making highly-intelligent postings starting next week, living as I will be on fish-heavy brain food, we’ll have GretchenS to thank.

I did the weekly distribution at their Reading pick-up site until they dropped that location. They say you need to commit to at least 6 weeks but don’t enforce this. Lots of times people order a single time; it just needs to be by the previous day and of course it’s a crapshoot since you won’t know what variety of fish it will be. I have tried the very pricey eggs and found them no different than supermarket eggs, whereas the eggs I get from a poultry farm near me are superb.

Nope. They make and sell their own stock and chowder, so they use the heads and frames themselves. You could place a one-time whole fish order. If the location near you has a W/Th/F pick-up you could keep tabs of what the fish is earlier in the week, then order the day before. This would give you the best odds of getting a variety suitable for stock.

I emailed them just now and asked if I could purchase fish frames/heads and if I could sign up for fewer than 6 weeks. I’ll post what the response is.

This is a wonderful local opportunity and it’s great to see so much discussion about it.

I just heard from Cape Ann Fresh Catch. They are quickly and wonderfully responsive. They can’t sell the fish frames and heads because they are so perishable and they don’t need the liability. I will try to get some from New Deal Fish in Cambridge.

I understand that. They will also accept purchases of fewer than 6 weeks of the fish share.

I’m going to wait and try to do six weeks beginning their summer cycle in July.

Thanks again to everyone who responded about this wonderful local resource. We are lucky to have them.

They try not to repeat within a season, but IME the reach exceeds the grasp. Lotsa pollock. And though there are a few varieties of flounder/dabs, it’s still flounder.

And every week it is flounder or dabs I am deliriously happy – especially dabs! Pollock is mighty tasty too in my book. just depends what you like.

I’ll document my experiences with them here.

My understanding is that they work with local fisherpeople. I’m curious how it works. If, as you suggest above, knowing what they have for Monday deliveries tells you something about what you’re likely to get on a Wednesday, it would imply that they buy a whole bunch of one type of fish every week then distribute it. It’s possible that’s how they operate. It seems equally plausible, though, that they buy one type of fish from one outfit on a Sunday, give it out on Monday, buy another type of fish on Tuesday, give it out on Wednesday, etc. They may even buy several varieties from one or more sources on one day and give out different varieties to different customers the next day.

When I was distributing the shares, I was asked when the fish was caught, so I asked the office. They told me it is usually within a day, never more than two. I believe that the reason there tends to be the same variety several, if not all, days of a given week is that there are a lot of that fish in the area that week, so that’s what the dayboats are unloading at the dock. It’s 18 months since CAFC dropped my location so I can’t swear things are still the same. I was surprised to see the addition of swordfish since it’s my understanding that these are caught farther out to sea than dayboats travel, but perhaps the big fish are now swimming closer to shore.

I picked up a pound of very fresh-seeming haddock and a pound of salmon from them on Monday. Their suggested recipe was to roast sliced potatoes, tomatoes and thinly sliced shallots, with salt, olive oil, and a touch of fresh thyme covered at 425 for 45 mins, then add a layer of thinly sliced lemon topped with the fish (seasoned with salt and more thyme), and roast, covered again, for another 15 min.

I tweaked this a bit: I added a liberal dash of maras pepper flakes (maras is a Turkish hot red pepper) to the potato-tomato-shallot mix, and roasted covered for 25 min and uncovered thereafter. (As I had suspected the mix had gotten a bit soupy when covered). I then turned on the broiler, leaving the pan in while it was pre-heating, and added the fish seasoned with thyme, “Kamput & Salt” from the excellent Curio Spices on Mass Ave (a Cambodian black pepper and Maine sea salt mix, with a touch of lime), and liberal dabs of butter. I should have had the pan closer to the broiler, because I wanted some browning, but the results were nevertheless tasty. (I purposely stuck in one filet upside down to get a bottom view.) 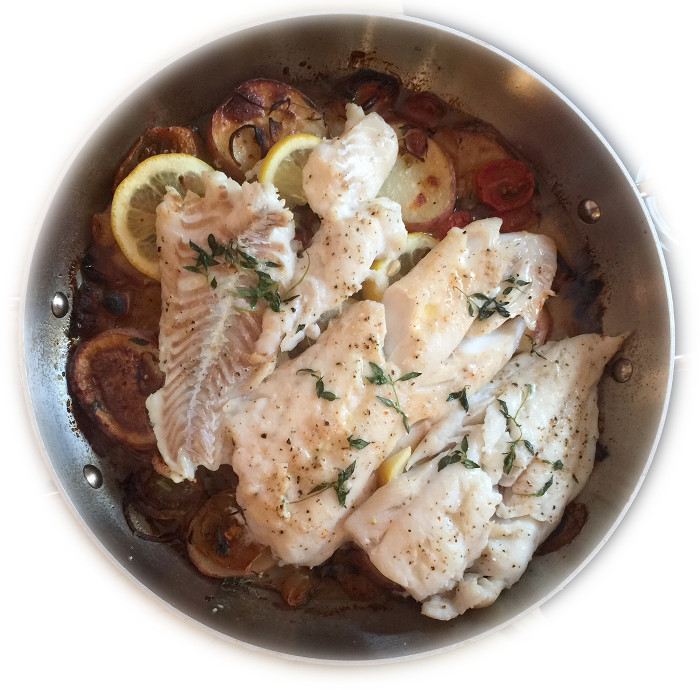 I pan-fried the salmon rubbed with salt and cayenne, skin side down first till it crisped, then briefly on the other side. Added fried capers. 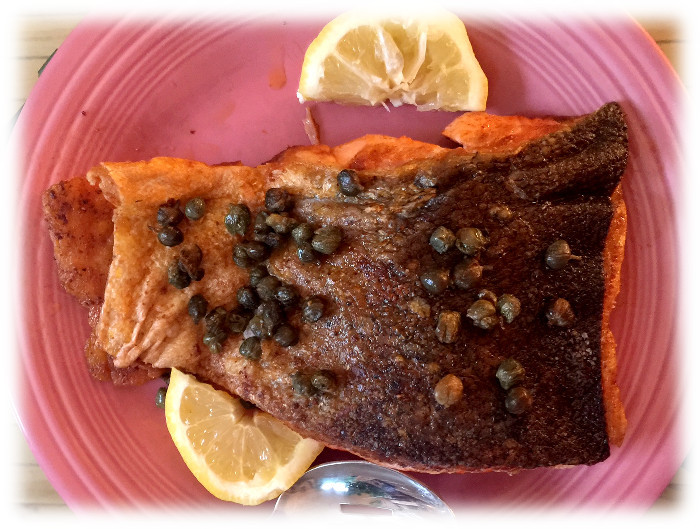