Those pictures are making me hungry! I do find with the recipes that they send I have to use my own judgment about how long the fish should be cooked. They pick internet recipes that sound good and I don’t think they test them and sometimes the directions would have you cook the fish a laughably long time.

Yes, 15 min at 425 seemed a longish time for something like haddock. Mine was done (even a trifle over) after 5 minutes under the broiler.

Cape Ann Fish, Week of 6/12 of the late spring and early summer season

Picked up a lb each of monkfish and scallops on Monday. Kept them on ice till Tuesday, when we had planned a barbecue.

Marinated the scallops briefly in a vitamixed juice of garlic, ginger and lemon, then skewered them and grilled sprinkled with salt and pepper on charcoal. Served on a bed of faintly pickled cucumbers, shallots and jalapeno (shocked with ice water, then “pickled” for a few hours in the fridge with sugar, salt, rice wine vinegar).

Coated the monkfish (cut into chunks) with a green chutney of garlic, ginger, green thai chilies, cilantro, lime juice and salt. Let sit for 30 minutes before skewering and grilling. 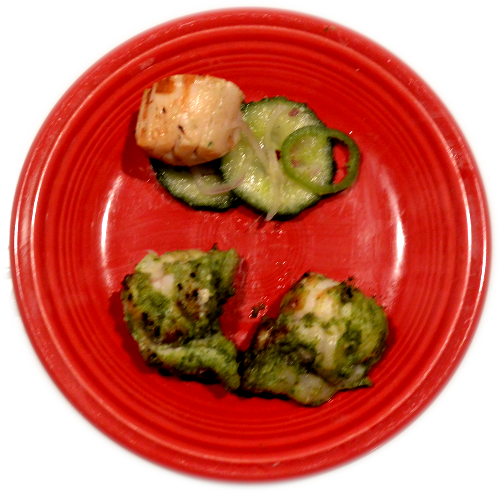 Oh, eggs. I got some of the “Cape Ann eggs” for $6.25 a dozen last week (6/5). Expensive, but no more so than other “farm eggs.” I fried a couple in butter, with one of Carol’s heirloom blue eggs from Whole Foods as a comparison: 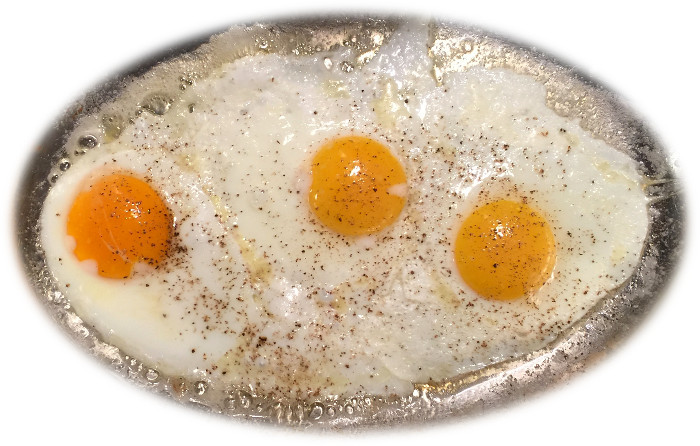 The blue egg had an orangier yolk, and there was less of the thin white that runs all over the pan. The yolks of all the eggs tasted nicely eggy, with the edge to the Cape Ann.

Yesterday’s offering was swordfish. I was told it was local, but the reminder email did not offer details. (If you opted out, you got pollock from F/V Catherine F. The given name of your particular fish was not revealed.)

I was in a hurry when I got home with the fish, and had to move fast. I rubbed a mix of kashmiri chili powder (very red in color, but very mild as these things go), sri lankan turmeric (from Curio) and salt all over the fish. Chopped potatoes, fennel and spring onions, mixed with some of the dry rub and roasted in the oven at 425 on a parchment lined baking pan with olive oil for 20 min. Towards the end of this, panfried the fish in olive oil on medium-high for about 90 seconds on both sides and about a minute on the edges (steadied with tongs. Then placed on vegetables in oven for another 8 minutes. Meanwhile, poured off excess oil from frying pan, and used a tbsp of butter and a squeeze of lemon to deglaze it. Poured this over fish after it was moved to a serving plate. 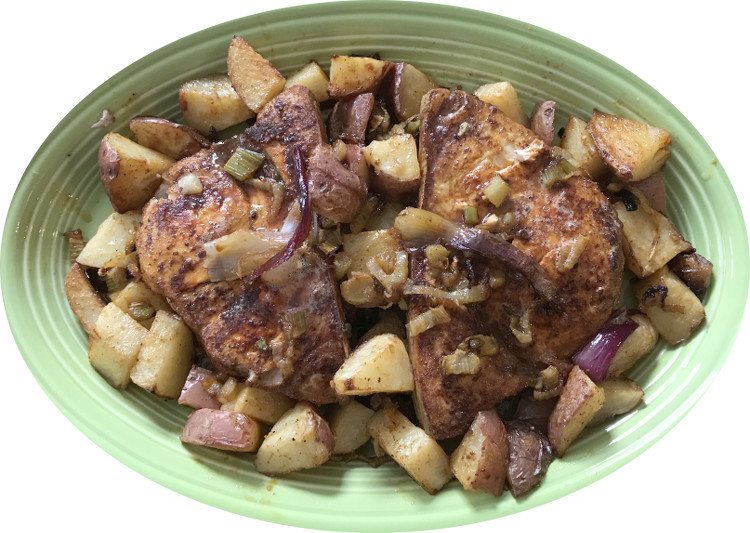 Wow, that sure looks tasty!

Last week of the late spring early summer season (and my 4th week):

The fish was dab, yesterday and I had to look it up:

The American dab, also known as the American plaice, is a popular Atlantic fish that is often used in fish and chips. Read on to learn more about this fish.

It was suggested that I flour and fry, and I can see how that would have been good, but I did not have the time to give each delicate filet the attention that that method required. So I simmered a sauce of soy, a little rice vinegar, a touch of sesame oil, thinly slivered ginger, thinly sliced fennel, some young garlic cloves, chopped scapes and a seeded thai chili. Then slid the the fish in for a couple of minutes. 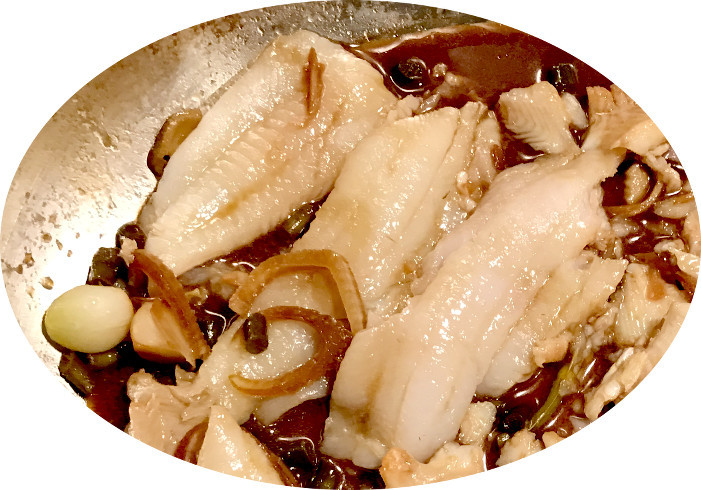 Dabs are just a small flatfish. Treat them like flounder, sole, or fluke.

Frames? Is that a modern euphemism for carcasses?

Frames? Is that a modern euphemism for carcasses?

uh no. Frame is common terminology for skeleton of fish, after the meat has been sliced off for filets.

Reply to KWagle: yeah, google is a “modern euphemism” for “looking up stuff.” Many recipes for fish stocks, soups, stews, paellas call for “fish frames” for making a flavorful liquid for cooking fish.

I’m finally doing a Cape Ann Fresh Catch fish share. Yesterday’s allocation for my 1 pound fillet portion were 2 delicate fillets of haddock plus a bit extra to fill out the full weight.

Pristinely fresh haddock with not even a tiny whiff of fishiness. I quickly baked the fillets with a diced beefsteak tomato, olive oil, a squeeze of lemon, and a few squeezes of harissa (from a tube) brushed on top of the fillets. Threw in a few chopped, pitted oil-cured Moroccan black olives at the end. The concoction made a sauce as the fish baked. Quick and easy.

We were too hungry to get a useful photo, though!

Hope you’ll keep posting what you’re getting each week.

I decided not to continue the share for the main summer season. I found it onerous to be at a particular place at a particular time each week. And (as with vegetable shares) I find that making selections at a market suits my style of shopping better than getting something that somebody else has selected.

@fooddabbler, I will try to post what I get from Cape Ann Fresh Catch for the main summer season then. Not good about taking photos as you do so well, though.

So last week’s pickup was hake, a repeat from my first summer week. Prepped the fish immediately using a hake with chorizo and potatoes from Rick Stein: http://www.bbc.co.uk/food/recipes/merluzaalagallega_11637 Subbed n’duja sausage for the chorizo because it’s what I had on hand.

We also have a CSA vegetable share, so I am in a practiced rhythm for pickup routines. Fish goes in the freezer right away when I can’t deal. Keeping pace with the veggies is more of the challenge for me. So far, I find the Cape Ann fish a good complement to our veg share.

Last week’s pickup from Cape Ann Fresh Catch was sole, after we returned from two weeks of vacation. Our 1 lb. share consisted of small, delicate fillets of sole that were the best we can remember tasting.

On another note, we skipped the previous two weeks of pickup (I did not sign up for those weeks because of vacation) and the CSA totally got that right.

I happily subscribed to a 1 lb fillet share for six weeks of the eight-week summer season. We are taking a breather now. While having weekly access to fresh fish at a local pickup point has been wonderful, we need to eat the fish fillets that I froze during the weeks when we ate mostly bountiful fresh summer vegetables.

Here’s a weekly rundown of what we received over the summer season:

If there’s another season after the fall season ends, we expect to sign up again. Great resource.

thanks for the reminder. I hope to do it if there is a winter season.

Another season of Cape Ann Fresh Catch starts Nov. 6. Sharing in case anyone’s interested in subscribing for a fish share:

Thanks for the heads up. I have wanted to move away from fillets to whole fish and Cape Ann has that option.

I just checked out their website and learned a new term - scrombic-intolerance, which seems to encompass oily fish like bluefish and mackerel. We definitely like our oily fish in our household, so no fear of scrombic species (well I love them, B not so much because he fears mercury). Wimp.