Can Somebody Puhleeze Settle This Argument Already?

Absolutely agree about the cut. Found this about “bottom round”.

Compare that to ribeye.

This website says both can be prepared “roast/bake”, but I think of them very differently. I LOVE a fast cooked ribeye but I think it’s expensive, and would like to find a good way to roast a round.

I got a bottom center about 6" x 6" with a fat slab on the bottom. Sure, would have loved to have gotten rib, but didn’t find and anyway, that’s a bit steep for me.

So, what do you say, Chemicalkinetics?

The Cooks Illustrated/America’s Test Kitchen method can make a roasted eye round that is tender, but there will be no gravy. You can of course braise a small amount of chuck separately, for the purpose of making gravy.

Agreed. With round I prefer to cook it sous vide for a day at a low temp (130) to tenderize before searing, but even then I find it makes better cold sandwich slices than a hot main dish.

I’ll chime in for reverse sear too. So low and slow.

Choice of seasoning will make a considerable difference.

We had some version of a butterflied/rolled roast at Christmas or New Years for many years - I think the original recipe was this one from Cook’s Country (you can play with the seasonings - we like more garlic, sometimes anchovies mashed into the spread, sometimes we skip the mustard, and so on).

This one has a fat layer & some marbling - one large vein and a few capillaries. But not a lot.

Do you suggest bringing the meat to room temperature? Letting it dry out in the fridge the night before, etc.?

I just watched the latest “Cooks Country” which showed how to cook a bottom round that cooks low and slow. They brine it in advance and add a zippy sauce Looked delicious.
The video is not available yet, but the recipe is if you do the free registration

You can’t get into Cooks Country w/out giving them credit card info. I refuse to play along with that game. I don’t think it’s a transgression of the rules to describe the basic technique. I asked a question to simplify, and not to complicate, my life.

Yes, follow all the fussy bits of the CI method.

I followed the Cook’s Illustrated instructions but didn’t do a preliminary reverse sear, I did a short broil afterwards – and I’m not sure I needed that. I salted beforehand. You don’t need too much salt. I wrapped tightly in plastic and wrapped that in foil. It was in fridge about 18 hours. I took it out 1 hour beforehand.

My piece of meat was approximately an 8 x 6 inch rectangle. 250F, checking temperature every hour. At 1 hour the internal temp was 80F. I’m going by memory so I might be a bit off. I lowered the temperature to 200F. Internal temp was 130F at 2 hours. I took out meat, rested it, and ½ hour later put it back for 5 minutes under the broiler.

In retrospect I didn’t need to do this. The surface I broiled (which was on the bottom in the oven, fat layer on top) was already browned, and I didn’t care about the sides as they were outside slices anyway – and they were nicely browned, not gray. After 5 minutes under the broiler the internal temp was 137F. That was a bit overdone to my taste but meat was still pink, so not all lost.

I sliced very thin. Juice came out of meat for at least a day afterwards - interesting. There was one large vein of fat running through the meat and numerous tiny ones. Also interesting.

If you must broil, roast until 120 degrees. Personally, I’d simply roast to 130 and forget about the broil. Also, I’ll put the oven at 200F and keep it there. That is the lowest my oven goes. I’d salt a bit less.

Overall, it was a qualified success.

Thanks to everyone who helped me demystify this process.

I became a reverse seat convert years ago, especially on the grill. A really good instant read thermometer makes the process almost idiot proof. Lately I’ve been Sous-viding a lot and find most meats are perfectly cooked that way… although you don’t really get the same taste as from grill charring. OTOH my wife loves the melt-in-your-mouth texture Sous Vide gives.

The reason this argument never gets settled is that there really are different good ways to do it, and none of those good ways deserve to be forgotten.

Every good method has problems or pitfalls or limitations, and I think being able to discuss them with a lot of different people really helps to get them identified and solved.

One thing I think happens too often is someone hears advice on how to avoid a pitfall in Method A, and repeats that as gospel to someone who is actually using Method B which doesn’t have the same pitfall.

Count me among the fans of the reverse sear. With a trusty thermometer such as a Thermapen, I can always get the result I want even though I cook a roast or a steak only occasionally. Thermapen products are pricey but you can get on their email list to be notified when there’s a sale. (I have a Thermapen Classic that I now use to temp anything and everything from reheated leftovers, to warm water for yeast, to bread, to fish, to meat.)

I initially posted they were on sale right now, but nevermind. Recent sale is over. Just don’t buy it on Amazon.

I’m trying a pork roast something like this I just on sale at heritage meats.

It starts in a hot oven, rather then seared in a pan. This Bone-In Pork Roast Is Your New Dinner Party Move

An Italian-style bone-in pork loin roast is one of the easiest (and most delicious) ways to entertain. This large-format main course centerpiece will transform any dinner into a party.

Anybody know what white miripoix is?

I am starting out with the Seriouseats reverse seared pork chop method, 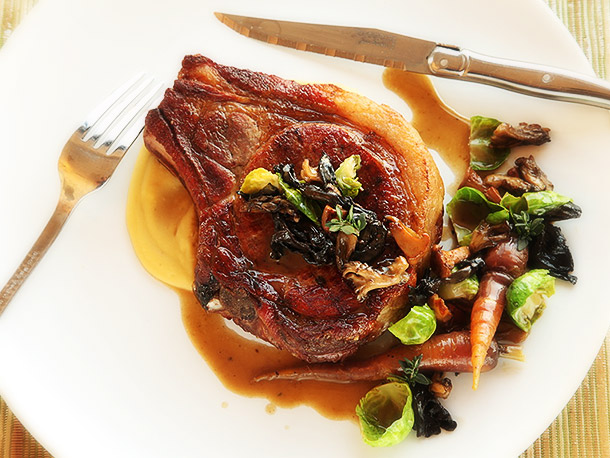 For the ultimate pork chops with a deep brown crust and juicy interior, dry-brine them overnight in a mixture of salt and sugar, let them air-dry, cook them in a gentle oven, and finish them off with a sear in a hot skillet.

but don’t imagine I can effectively sear something shaped like this.

The main difference to make a mirepoix “white” is to leave out the carrots. They’re usually replaced with parsnips. Sometimes also leeks and/or mushrooms are added.

Usually (if not always), white mirepoix is chosen over regular mirepoix for visual reasons, similar to how you might put white pepper into a light-coloured sauce. 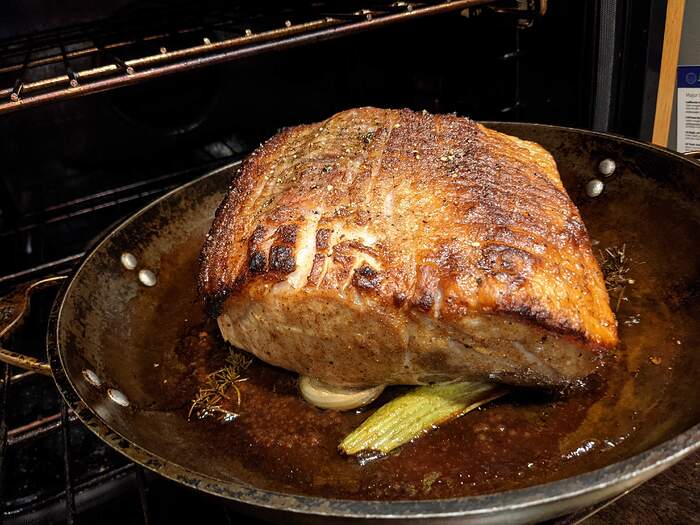 Thank you! Forgot to take a picture of the slices before we scarfed it down.

I think the ATF/CTP* meals are the best ones.