Can Somebody Puhleeze Settle This Argument Already?

This Thanksgiving, I’m doing a roast. We can have a bird for Festivus.

So, is it low and slow, or high and short? Cover or no? Braising liquid or dry?

What kind of roast? At this point, I’m not sure but I’m leaning towards bottom round because it’s moderately priced yet has fat. Suggestions appreciated.

The ultimate effect we want is that nice, red, sliceable cut. Not a pot-roast, brisket type of effect at all.

There is a lot of confusing stuff on the internet about this. Many roasts are covered (which steams the meat into a pot roast, no?). Some advocate putting the roast onto a bed of chopped vegetables. I’m suspicious of this - doesn’t that contribute to steaming, even if uncovered?

Thank you in advance for demystifying this topic!

I’m not a fan of round roasts. I would use a ribeye roast if you want fat or a filet if you don’t. Reverse sear method will give you great results on either. Roast low until you reach within 5-10 degrees of desired internal temp, then pull the roast from the oven and sear all over in a skillet. You can also just crank the oven at the end to get nice browning. No covering, no moisture, no vegetables - those things are for pot roast! 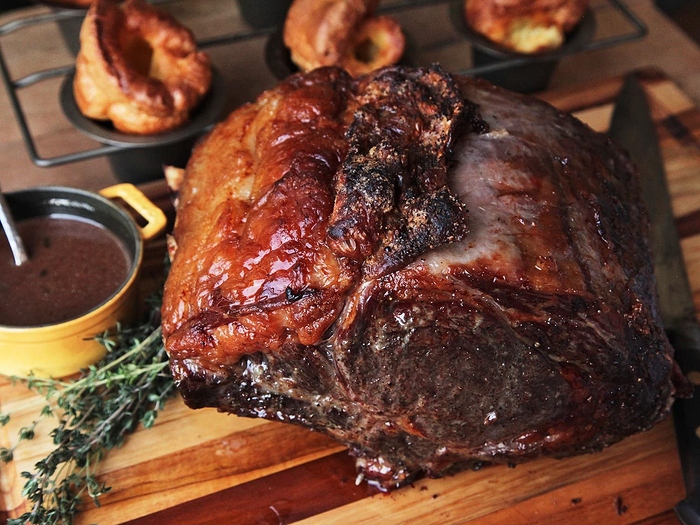 Start low and slow and finish hot for the juiciest, most flavorful, evenly cooked prime rib.

Hey, thanks! It looks so nice & simple… I don’t know why but I seem to have a need to fiddle with & complicate recipes.

For the effect you’re looking for, I absolutely second the reverse sear. Short of a sous vide then sear, that’s the closest you’ll get to the even doneness and still get some color or crust on it.

Another vote for reverse sear! I’m going to be researching a bottom
round, but I’d be all over it if I could find a moderately priced ribeye.

Another low and slow vote here. I use the recommendations from the old playgroup that were posted by Fourunder…I’ve been making delectable standing rib roasts for several years now with his guidance

Also a vote for the reverse sear. Sounds like the result you’re going for too. Pink juicy inside but still a crust on the outside.

Depending on your oven, I have found the a brush with butter right before the final in oven high temp finish helps get the crust quickly for me. YMMV.

I am probably not helping much here. I feel it has a little to do with the size and the cut you have. There are some cuts which you lean more toward a fast, and there are some cuts which it need to lean toward a slow and low to at least breakdown the tougher tissues (you can finish with high heat, but long and low heating needed to break down the meat).

Absolutely agree about the cut. Found this about “bottom round”.

Compare that to ribeye.

This website says both can be prepared “roast/bake”, but I think of them very differently. I LOVE a fast cooked ribeye but I think it’s expensive, and would like to find a good way to roast a round.

I got a bottom center about 6" x 6" with a fat slab on the bottom. Sure, would have loved to have gotten rib, but didn’t find and anyway, that’s a bit steep for me.

So, what do you say, Chemicalkinetics?

The Cooks Illustrated/America’s Test Kitchen method can make a roasted eye round that is tender, but there will be no gravy. You can of course braise a small amount of chuck separately, for the purpose of making gravy.

Agreed. With round I prefer to cook it sous vide for a day at a low temp (130) to tenderize before searing, but even then I find it makes better cold sandwich slices than a hot main dish.

I’ll chime in for reverse sear too. So low and slow.

Choice of seasoning will make a considerable difference.

We had some version of a butterflied/rolled roast at Christmas or New Years for many years - I think the original recipe was this one from Cook’s Country (you can play with the seasonings - we like more garlic, sometimes anchovies mashed into the spread, sometimes we skip the mustard, and so on).

This one has a fat layer & some marbling - one large vein and a few capillaries. But not a lot.

Do you suggest bringing the meat to room temperature? Letting it dry out in the fridge the night before, etc.?

I just watched the latest “Cooks Country” which showed how to cook a bottom round that cooks low and slow. They brine it in advance and add a zippy sauce Looked delicious.
The video is not available yet, but the recipe is if you do the free registration

You can’t get into Cooks Country w/out giving them credit card info. I refuse to play along with that game. I don’t think it’s a transgression of the rules to describe the basic technique. I asked a question to simplify, and not to complicate, my life.

Yes, follow all the fussy bits of the CI method.

I followed the Cook’s Illustrated instructions but didn’t do a preliminary reverse sear, I did a short broil afterwards – and I’m not sure I needed that. I salted beforehand. You don’t need too much salt. I wrapped tightly in plastic and wrapped that in foil. It was in fridge about 18 hours. I took it out 1 hour beforehand.

My piece of meat was approximately an 8 x 6 inch rectangle. 250F, checking temperature every hour. At 1 hour the internal temp was 80F. I’m going by memory so I might be a bit off. I lowered the temperature to 200F. Internal temp was 130F at 2 hours. I took out meat, rested it, and ½ hour later put it back for 5 minutes under the broiler.

In retrospect I didn’t need to do this. The surface I broiled (which was on the bottom in the oven, fat layer on top) was already browned, and I didn’t care about the sides as they were outside slices anyway – and they were nicely browned, not gray. After 5 minutes under the broiler the internal temp was 137F. That was a bit overdone to my taste but meat was still pink, so not all lost.

I sliced very thin. Juice came out of meat for at least a day afterwards - interesting. There was one large vein of fat running through the meat and numerous tiny ones. Also interesting.

If you must broil, roast until 120 degrees. Personally, I’d simply roast to 130 and forget about the broil. Also, I’ll put the oven at 200F and keep it there. That is the lowest my oven goes. I’d salt a bit less.

Overall, it was a qualified success.

Thanks to everyone who helped me demystify this process.

I became a reverse seat convert years ago, especially on the grill. A really good instant read thermometer makes the process almost idiot proof. Lately I’ve been Sous-viding a lot and find most meats are perfectly cooked that way… although you don’t really get the same taste as from grill charring. OTOH my wife loves the melt-in-your-mouth texture Sous Vide gives.