Cabbage, Potato, and (Vegan!) Sausage Soup - aka, "That Beige Soup"

I decided to start with a WaPo recipe for cabbage soup - https://www.washingtonpost.com/lifestyle/food/this-simple-soup-unlocks-cabbages-sweet-side/2018/03/12/7b65451e-23b8-11e8-94da-ebf9d112159c_story.html - and make some modifications, discussed here: Modifying this Cabbage Soup Recipe

Directions:
Sauté sausage in olive oil in large soup pot until browned; remove to bowl lined with paper towels reserving oil in pan.
Add more oil to pan, if needed, and toss in onions, garlic, and cabbage; stir over medium heat until onions soft and cabbage is wilted.
Add in dried thyme and stir.
Add diced potatoes to pot and add enough water to cover by an inch or two.
Add heaping spoonfuls of both types of Better than Bouillon; stir to incorporate.
Cover pot, reduce heat to low, allow to simmer - stirring occasionally - for about 30 minutes/until potatoes are soft.
Mash up some of the potatoes, stir in the reserved brown sausage, season with a LOT of fresh cracked pepper, and let simmer for a few more minutes, then taste and adjust seasonings.
Serve.

Overall I am pleased with the results, and will gladly make again, but there were things that could be improved:

Photo of the beigeness, before mashing up the softened potatoes. 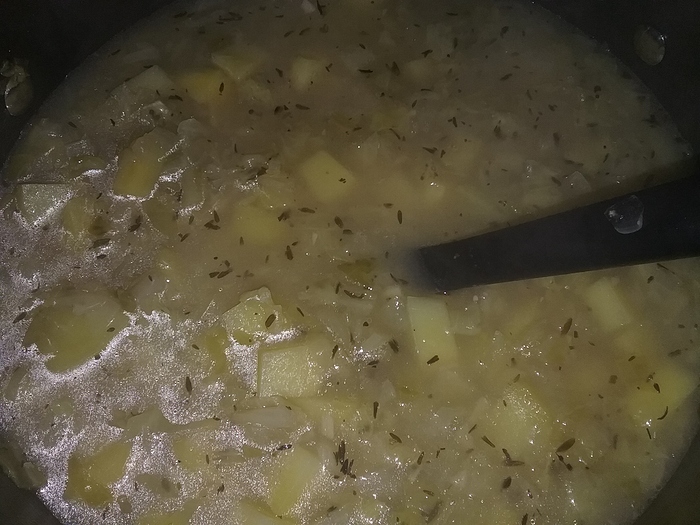 Nice!! That sounds like a very tasty easy meal!
I wonder if the apple from the sausage is giving it the “sweet” flavor… although if you have young small cabbages those can seem sweet
I wouldn’t use cider vinegar (also somewhat sweet), but something like a sherry vinegar or red wine vinegar sprinkled ontop when servng will give it a nice bright touch of acid.
If you want a nutty crunchy thing a sprinkle of pine nuts on the bowl would be great, i think some chopped toasted walnuts would work well here too. Probably more “bang for your buck” using ad a garnish than trying to add nutty flavor to the soup- it would have to compete with the strong flavors of the sausage and cabbage.
The beige certainly is… well yeah, not especially beautiful but if it’s delicious who cares??! Something like chopped chives, flat parsley, or chervil would be pretty and work with the flavors. Or if you had a bit of radicchio or red cabbage shredded superfine that would be attractive and balance the sweet.

I make the same soup but I use only 2 potatoes but add about a cup of cream or half and half and a aprox. a cup of blend cheese at the end. You can adjust to you likes.