Is the inference here that the small inexpensive ethnic restaurants which are staffed by immigrants are perhaps skirting the minimum wage?

I still remember an endless rounds of the Trusthouse Forte carvery, with large steaming joints of beast under infrared, all vegetables cooked until they were the same shade of yellow, and Yorkshire pudding that you could play hockey with.

After the third or fourth day of this I would ask my English associates if we could go out for a Rogan Josh or a Vindaloo instead.

You should have seen the relief on their faces…

I’ve been back recently since my company had a plant in Glasgow, and apart from a couple of better places, the story remains much the same.

If you think it’s bad at the shore you should try Yorkshire, Northumberland & Scotland.

I presume, from context, when you write “spiced”, you refer to south asian spices. As such, it’s hardly surprising that those flavour don’t traditonally appear in the various north European cuisines. Cultures traditionally eat what they grow.

That said, Britain colonial past means we have incorporated more spice into our food, over the centuries, than perhaps our neighbours have done. It’s a long history, with many dishes, mainly desserts, surviving. Our oldest published recipe for “curry” appears in Hannah Glasse’s 1747 book and, more recently, I know that recipes for “curry stew” appeared in Army cookery manuals (and soldiers pocketbooks) in the pre Great War period.

I’m sorry you had such a disappointing recent trip to the UK. As always, research is everything. Yorkshire, for example, is an excellent county for eating, with a great committment to local seasonal produce. I agree that Northumbria, outside of Newcastle, is more of a challenge. Feel free to drop me a PM next time your’re visiting and I’ll be happy to try and recommend some places where you can enjoy British food.

I presume, from context, when you write “spiced”, you refer to south asian spices.

I’m thinking more in the sense of seasoned or flavoured. Traditional American cuisine, for all it’s other shortcomings, generally does not avoid bold flavours (ie Chili, Cajun, Tabasco, Texas, Molasses, Ketchup), or even the salt and pepper.

With traditional English food about the only thing that adds any zip is the Coleman’s mustard.

In the English hinterlands usually the best meal is breakfast (apart from the black pudding) or maybe the ploughman’s lunch at the pub. There are some delightful cheeses in England.

In the English hinterlands usually the best meal is breakfast

As my earlier post, please let me know next time you’re visiting, so I can recommend places for lunch and dinner. FWIW, I find that a good cooked breakfast here is a rare treat - most are very indifferent - so , if you rate those the best meals you’ve had, then you have really experienced poor choices. And similarly with the ploughman’s lunch - I understand the UK now produces a greater variety of cheese than France, yet so many ploughman’s lunches are served with uninteresting factory produced Cheddar.

Of course, you’ll appreciate that British restaurants tend to cater for British customers. The use of chilli doest feature in our traditional cuisine, as it might with Cajun or Tex-Mex food. As such, it can be difficult for, say, American visitors used to chilli to eat here - you’re absolutely right in that they won’t find the sort of food they are used to However, you will easily find dishes using native herbs and/or the spices that come from our traditional trade routes - I always struggle with the concept that “British food is bland” that visitors, like yourself, sometimes describe it as. It’s a remark that you rarely see tossed in the direction of the cuisines of neighbouring north European countries which draw on identical produce and cooking methods, yet do not have the wider range of spices that you find in British food. On the other side of the coin, I wonder how often Americans dismiss the cuisine in New England as being bland - yet it is probably the closest to British cooking you’ll find in America. As such, I confess to usually being very dismissive about references to “bland British food”. It may have been a fact in my youth during the 1950s, when food rationing was still in place after WW2

But you are, again, right that modern British food does not have the “bold flavours” of some American regional cuisines - I think our many of our chefs would pride themselves on presenting local, seasonal produce without too much cheffing about with it. They let the flavours of the produce speak for themsleves. And I am so glad that’s the case - a significant improvement from my youth when “good food” had to be French influenced.

Gosh, I have some of my best meals in places like Glasgow, the north of Scotland, Edinburgh, and of course, London. I have never ordered a roast with sides, but instead try to find restaurants that brag about where they produce is sourced and then try to distill what is a regional specialty.

When I was in London in 1979-ish I was poor and I found the food that we could afford to be fairly miserable. Return visits over the past 15 years have included some really inspired dishes from some very unusual places.

I used to travel a lot on the UK in the late '80’s and I agree it was hard work to find decent food. We tended to do pretty well but it took a lot of research and we would probably eat “Indian” 50% of the time.

But times have changed and there is a lot of good food around. The “gastropub” revolution has meant there are lots of decent pubs with ambitious menus - although there are also lots of pubs with freezers full of pre-prepped food and grand menus.

Food became fashion and so lots of hipsters opened places with decent ambition and an eye to global trends. So spicing is up, diverse influences are up, and the standards are definitely better. Plus there is a lot more immigration from diverse places so the mix of new restaurants has broader enormously from the standard Indian/Chinese.

That said its still easy to eat very badly in the UK - like the US chain restaurants rule the high street and you need research to find the gems.

I tend to think most countries are the same though - you can eat well in the US but equally you can eat very very badly. Trips to my companies HQ in the US always involved vast quantities of very average food. Not bad but it tended to be volume over decent cooking…maybe analogous to your THF carvery experience.

you need research to find the gems.

Gosh, I have some of my best meals in places like Glasgow,

Last time I was in Glasgow this was the culinary rage: 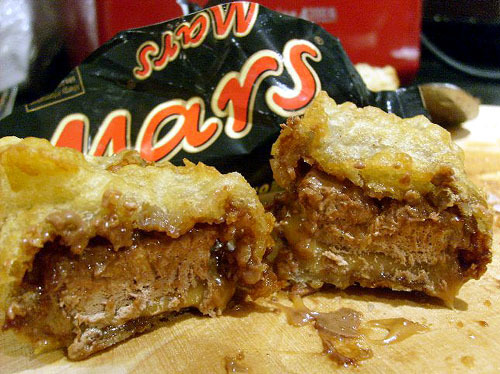 That is a deep fried Mars Bar.

I have some of my best meals in places like Glasgow, the north of Scotland, Edinburgh

This was also really popular: 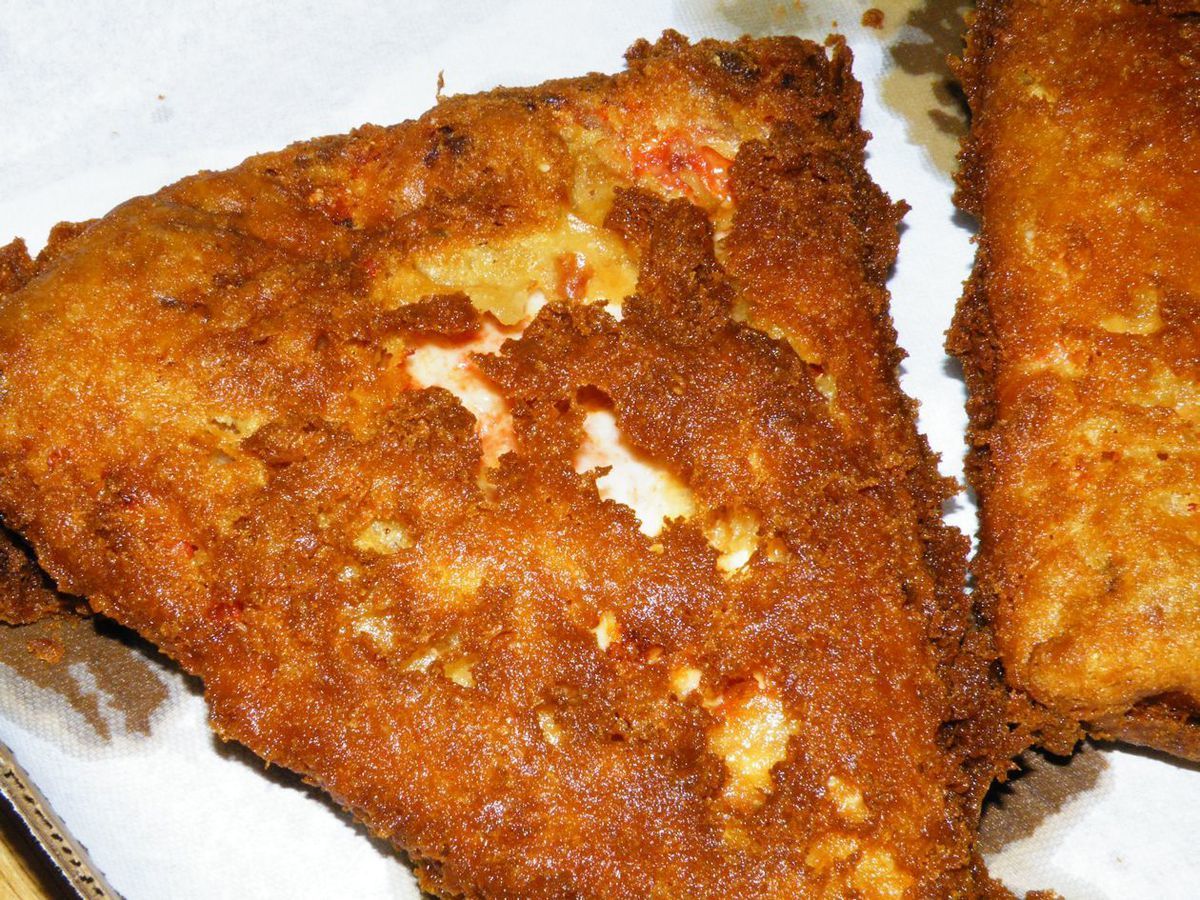 That is a slice of deep fried pizza.

Food became fashion and so lots of hipsters opened places with decent ambition and an eye to global trends. 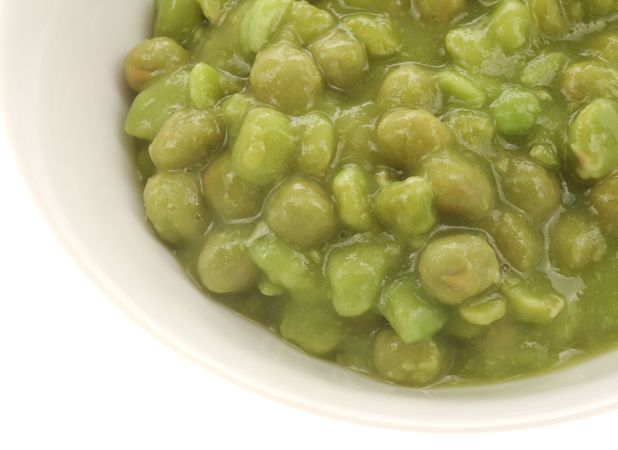 These were usually served with fish and chips.

I think our many of our chefs would pride themselves on presenting local, seasonal produce without too much cheffing about with it. They let the flavours of the produce speak for themsleves.

Such as perhaps this Newcastle speciality which has enjoyed a recent huge resurgence in popularity: 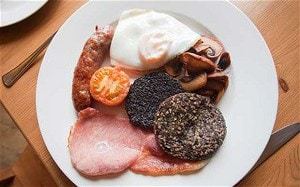 According to the article, black pudding is not just for breakkies anymore…

So come on guys, I threw some nice slow low hanging incendiaries into this thread and no one responds by knocking one out for six runs?

No defence of the black pudding?

I was in London a few times in the early 90’s. Admittedly I had some friends taking me around, but I thought the food I has was mostly pretty good. The Stilton however was exceptional. Go figure.

Speaking of Glasgow, York & etc. … I had dinner one evening with my friend Neal from Glasgow & his friend John from York. The food was fine but the conversation was impossible. Some thick accents. They couldn’t understand me or each other.

This week I took delivery of a 1.3kg black pudding sent from my parents who were visiting Stornoway. It’s bloody delicious…

This week I took delivery of a 1.3kg black pudding sent from my parents who were visiting Stornoway. It’s bloody delicious…

How would you say the black pudding compares to say a French boudin noir? 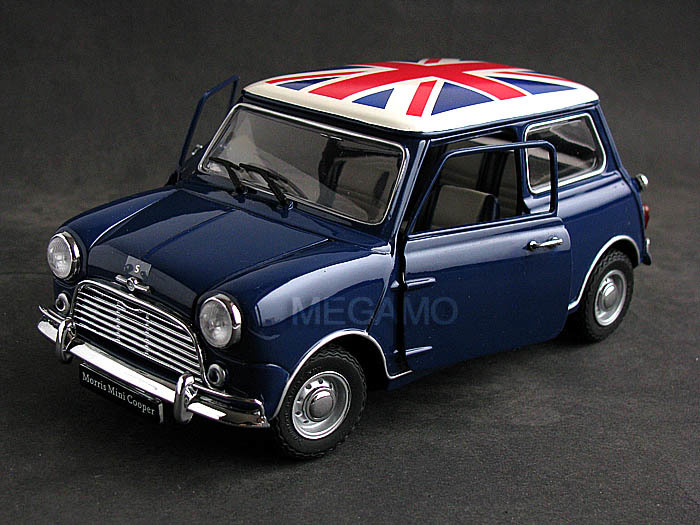 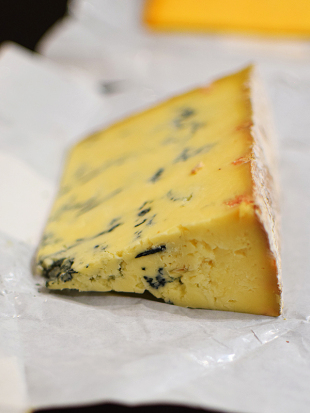 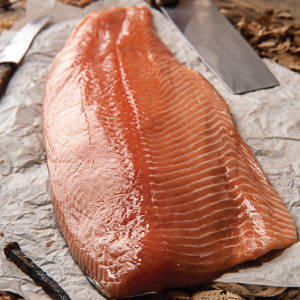 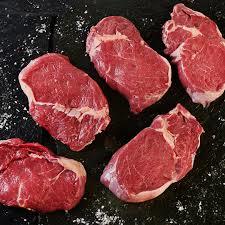 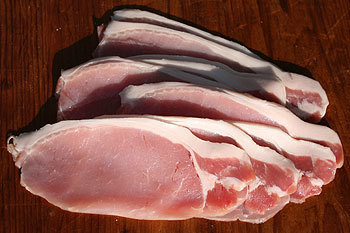