We love the novelty of the roving carts- what’s everyone’s favorite in that category?

We go to China Pearl. The quality is variable, but they have this coconut soup with tapioca pearls that other places don’t tend to have, and every once in a while their dumplings shine.

Went to Shangri La at 11:30 today to find a sign that they would open at 4. Hope this is temporary.

We shuttled off to Chang Sho, mainly because it’s relatively close. Most things were good, but nothing was spectacular – there’s a certain muted quality to their food that perhaps their (often elderly) Cantabrigian clientele expects. There were decent dumplings in thin, chewy, translucent wrappers, a couple of well executed (i.e., not rubbery) shrimp dishes, and so forth. The food is very fresh, though, because they bring out small quantities at a time to the buffet table, but also very expensive: cost pp before tax and tip is $22.75.

(On the other hand, at Jing Fong in NYC last week, we paid $25pp – so perhaps prices are up at all the so-so places.)

When at China Pearl (our family fave), we always go searching for ginger tripe and chicken feet. They are delectable and no visit is complete without them. Best in the city IMHO.

I have to echo this at the top of my lungs. Shangri-La’s gua bao is perennially one of the best things I put in my mouth in any given year. Unctuous braised salty pork belly, sour pickled mustard greens, sweet & crunchy peanuts crushed with sugar, fresh cilantro, all in a moist fluffy steamed bun. I honestly don’t think any of the gua bao I’ve had in Taiwan have beaten it (though I have some better leads for my next trip). “Steamed Taiwanese Bun with Pork and Pickle” on their dim sum menu.

I have a lot of respect for David Chang, but after years of eating Shangri-La’s gua bao, when I first had his signature Momofuku Pork Bun which everyone seems so gaga over it was quite the disappointment. It was just a lackluster, muted version of a real gua bao, with dry spongy bread, barely-brined cucumbers, relying on Lee Kum Kee hoisin and Sriracha for any flavor - really, David? You can do better. And I think you should take every one of your fans to Shangri-La’s dim sum as penance.

Once more, you’re “spot-on” as the Aussies (or some other ethnic cultures) say. The Momofuku buns are fine, but inferior. (Of course, there are other attractions that draw one – me, at least – to the Momofuku places. Man, the ham at Ssäm.)

I’ve had the Momofuku recipe for ages and always thought wondered if the fairly simple recipe deserves the acclaim it gets, so it’s good to have someone confirm my suspicion. I believe the pork belly/mustard green/peanuts is the classic combo, so why mess with a good thing if you can’t improve it?

That said, I’ll still (shamefully) down a duck confit bao or two when it’s on the dinner menu at Brighton Bodega. It isn’t the best bao you can get nor the best value (the dollar duck bun in Flushing reigns supreme), but it still hits the spot.

Agreed - Longing for a Yank Sing (San Francisco) to show up here.

Had dim sum at Great Taste last week. Long wait for the food to emerge, after checking off the boxes, but it was worth the wait. Fragrant, freshly steamed sticky rice in lotus leaves, lovely shrimp dumplings with chives in translucent wrappers, pork fried in shredded taro-root, and the always wonderful fried tofu with XO sauce. The only clunker was dry Chinese sausage in a very doughy bun. A friend and I ate well, and the total bill was about $25.

Went to Joyful Garden in the Watertown Mall on Mother’s day. It was legit, similar offerings and quality to any of the big cart places in Chinatown, Also similarly packed at 11:00 on a Sunday. I don’t know whether Mother’s Day contributed to this or if it’s normally that busy on the weekends.

Just to keep things unified a bit, we also have a Joyful Garden thread with a discussion of dim sum there. I’m linking to to it below, to bring that discussion into this fold:

I think this an interesting enough restaurant that it deserves its own thread. I’d posted earlier about a dim sum experience there: Dim sum there since then has continued to be good, but not great. Freshness, I think, is still the main issue, and that’s related to volume. The same stuff circulates on carts because there are not enough people around to take stuff off them. Go there, people, go. The dinner menu looks very interesting, and they have fish tanks at the back, but I have not been …

Here are a few take-out dim sum experiences over the past year or so. I know we have a thread specifically on dim sum takeout but I thought I’d park this here and link from there to this post.

I picked up from Winsor Quincy this weekend - very smooth . Everything was good, just a big bigger / thicker than my nyc usuals. (My only nit is that they’re still using styrofoam.) Next time: China Pearl.

My usuals include har gow, shiu mai, and cheung fun, plus more depending on how many other people are eating. I also got the steamed spare ribs with black bean.

The dumplings were probably 40% larger than NYC. Har gow skins were thicker and stickier, cheung fun noodle was actually lovely, but the filling ratio was much lower because the noodle was rolled over in more layers. Also the sweet soy wasn’t good - way too sweet. Ribs were good. Flavor of everything was good, but a bit shy of NYC.

From memory, I recall China Pearl being a bit closer to NYC, but I haven’t eaten from there in years now. Need to refresh my memory next time.

My most recent NYC metric is Jing Fong (UWS) which was superb a couple of weeks ago. (Their Ctown branch was not a favorite - I’d take DSGG over it any day.)

Winsor is indeed spectacular. I have no idea why people choose mediocre steam cart joints instead.

Seems more like nostalgia than anything else here in the US. It’s probably what most Chinese immigrants who’ve been here a while remember, and that’s how many of the dim sum places were set up decades ago. When you go to Hong Kong today, nearly all the dim sum places I went to are like Winsor where you note what you want on the menu and the waitstaff will bring all your dishes to you.

I much prefer this to running around and chasing carts. I guess you don’t always get to see what you order first, if you’re a dim sum newbie, but given that most dishes are small portions I think it’s fun to order blind and give things a try.

I understand the food quality argument that you and @KWagle are making, but let me offer a defense of the spectacle of the cart. There is a real charm in having carts roll by and selecting things from them. And there’s the lovely fading grandeur – all that gold and red – of the “palaces” in which cart action often occurs: the main room at China Pearl, the NYC Chinatown location (now gone) of Jing Fong, etc.

Another argument in favor of the cart is that cart places, in my experience, have greater variety than the menu places. You have that big steam/fry table at CP or JF, for example, with all kinds of steamed and fried seafood, greens, and other stuff. Plus, try to get them to griddle turnip cake at your table in a menu place.

But, I do get the quality over quantity argument – just making a case for variety.

Had another round of spectacular takeout dim sum from Winsor yesterday, spectacular even after a 30 minute drive home. Standouts were the shrimp and chive dumplings (both the steamed and fried versions), the modestly named Shanghai chow mein (with thick, chewy noodles), the deepfried bean curd sheets, and rice cakes with XO sauce (texture tossup between the same dish with slightly less chewy turnip cakes). But the standouts among the standouts were the chau chau dumplings (pork with chopped, crunchy water chestnuts and peanuts), the fried fish cakes (flat, scallion-pancakey disks with a thin layer of fish paste, and really superb panfried dumplings, juicy enough to almost be soup dumplings. There was a lot more, all very good. Total price was $97, but we’ve gotten 6 meals out of it already, with enough left for a good lunch for two tomorrow.

@Saregama had commented above on the differences between Winsor dumplings and the ones from Jing Fong. As it turned out, I had JF dumplings on Tuesday in NY, so did a small test: 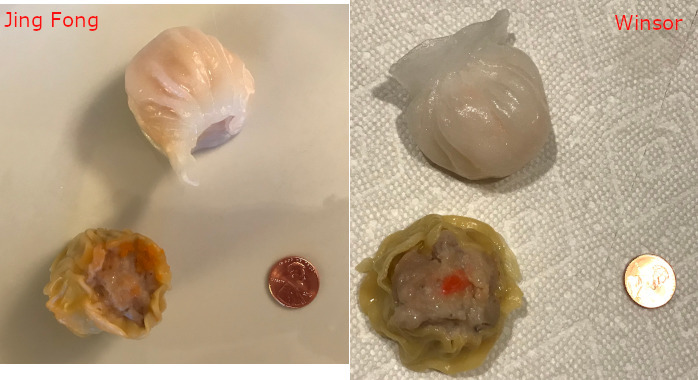 The Winsor dumplings are larger, but not by that much. The weights were 1.2 oz and 1.06 oz (JF, har gow and shu mai, respectively) and 1.35 oz 1.15 oz for Winsor for the same dumplings. The wrappers on the Winsor shrimp dumplings were, as @Saregama says, much thicker, as the pictures suggest (you can see through the JF ones). The shu mai wrappers seemed comparable.

While comparing, the Winsor dumplings being compared were $4.75 each for three ($5.79 if you order online), the JF ones $8 (online price).