Antons knows if blueying Carbon steel has a real effect on how well a pan takes on a seasoning or if it’s just for show and has no real benefit ?

I have now made it a habit to blue my carbon steel pans prior to seasoning them, but I can’t really say it has an effect on how well the pan takes on a seasoning.

Is blueing just a gimmick .
I know many Chinese chefs do it on their carbon steel woks. 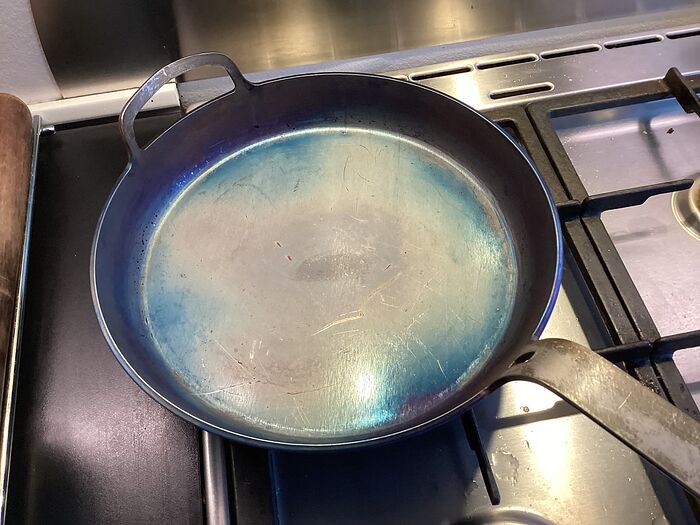 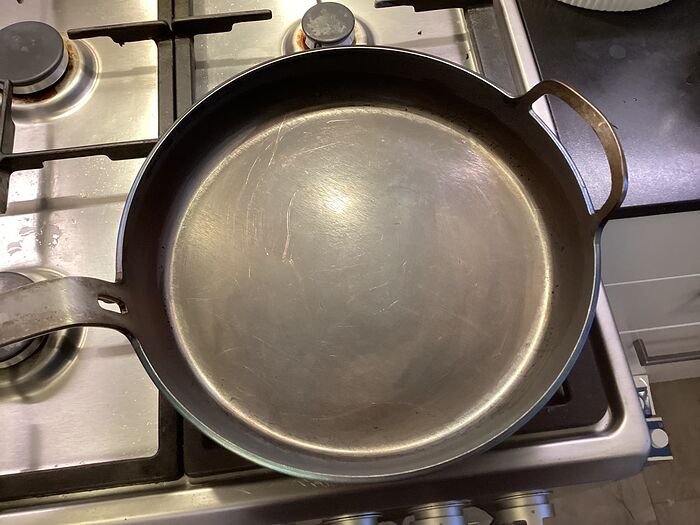 Bluing steel “helps” prevent rust, and can improve the finish of highly polished steel… but I don’t see how it would help or hinder the polymerization process of oil seasoning.

I don’t think bluing along help seasoning, but bluing does prevent/slow down rusting.
One more thing to consider is that I have seen opposite view points on seasoning temperature. There is the slow and low (temperature) approach, and there is the fast and hot approach. Advocator for the bluing seasoning goes with the fast and hot approach. You have seen those videos. Very high flame heating the carbon steel wok until it turns blue and then add oil with a lot of smoke.

there is the fast and hot approach

Quality seasoning is more about the amount of oil and not necessarily the temperature. Too little oil is almost impossible to do, but too much oil is fairly common… and can result in gloopy, sticky spots, and even rancidity.

After coating your pan with oil (inside and out), seriously buff it off with a cloth (I use an old tee shirt). It should not look wet (or even glossy). This allows for proper polymerization, and not cooked/burnt on oil.

My fav temp/time is in the oven at 400°F for a two hour timed cycle, and let cool in the closed oven.

Well, they were seasoning, just not intentional seasoning.

Just like our forefathers (and mothers) were also working out, but just not intentionally so. Cuz, y’know, working on the farm, walking (instead of driving), etc.

I’ve also seen the articles that recommend flaxseed oil for seasoning carbon steel pans and cast iron pans, but I’ve never thought using an oil not suited for real cooking as a seasoning oil and on top of that I’ve seen numerous examples of flax seed oil seasoned pans that ends up with a flaked seasoning due to the fact that flax seed oil gives an immediate great looking jet black look to the seasoning, but over time will flake off even more so than seasonings done with regular cheap high smoke point fibre less refined oils like grape seed oil and sunflower oil.

I season all my pans using the cheapest refined grape seed oil - an oil with a high smoke point and no fibres in the oil.

If you cook using the same carbon steel pans daily it might be rubbish. However if you don’t, it’s far from rubbish if you want to avoid rust buildup on your pans.

As an owner of 55+ pans, I try to rotate between my pans as much as possible. Hence I may only use a certain carbon steel pan once every two months.
Thus it’s important to keep my carbon steel pans oiled to a certain degree to avoid rust buildup on the pans.

If I cooked daily using the same couple of carbon steel pans, seasoning should only be done once and then just start cooking in the pan and within a week it would be naturally seasoned.

With that said, I only season my pans once after blueing them and maybe because of the blueing effect, my pans no longer rust just from resting on my pan/pot rack.

To be honest I do feel the seasoning oil layer bonds faster to the pan after I’ve blued the pan.

It gets darker immediately after adding the thin oil layer to the pan and that’s in a cold pan.

Just telling you my honest observation.

indeed - seasoning makes stuff like steel/CI more to the non-stick side.
I have seasoned any number of pieces - some of them rescued from flea markets/yard sales, sandblasted to bare metal for a new start - and never ever experienced the woes people report using oils&ovens.

Whenever the CI seasoning topic comes up. I think of my grandmother. She was born around 1900 anf i have he CI frying pan. She was a very no-nonsense kind of gal. Im sure there was no flaxseed oil in her kitchen ant the pans got waxhed in hot soapy water. Same as i do now.

One thing to be mindful of when superheating pans and skillets: if done improperly, too quickly, the bottom can warp, usually bulging downward because the expanding steel bottom can’t overcome the cooler side edges. I’ve done it more than once, even to cast iron.

A wok is already domed on the bottom and has the dynamics to take very high heat without damaging the shape.

I’ve done it more than once, even to cast iron

Me too… to a Lodge 12" due to leaving it on high heat and forgetting about it for way too long. I doubt I’d notice it if I didn’t have a ceramic cook top, but it now rocks a bit, and oil now tends to settle at the perimeter instead of the center.

One thing to be mindful of when superheating pans and skillets: if done improperly, too quickly, the bottom can warp, usually bulging downward because the expanding steel bottom can’t overcome the cooler side edges. I’ve done it more than once, even to cast iron.

A wok is already domed on the bottom and has the dynamics to take very high heat without damaging the shape.

I blue my carbon steel pans at medium high heat and I move the pan around minute by minute to minimise the chance of warping.

Good question - when I got the Matfer CS I blued it… because someone told me to.

More seriously - their protective coating is wicked hard to remove. I scrubbed and scrubbed per instruction and then with steel wool and then with chain mail and it still wouldn’t come off. (My test for this was to let it sit with water droplets all over the inside and see if it rusts - it didn’t, even after several hours.)

So I put it on the stovetop and cranked up one of the big burners (18K btu, I think) and let her rip with the hood running. It blued up real fast. I ran it full blast for 20 minutes or so, let it cool, then water tested it to a nice quick rust all over.

I had it seasoned “ok-ish” for a short while thereafter but messed it up with an acidic sauce, so I stripped it and blued it again - this time mainly because my son had seen just a bit of it starting to change color the first time and wanted to see the full process. Since then I’ve just been cooking fatty stuffs it as Happy said above and it’s gotten and remained well-seasoned.

I don’t think bluing matters with regard to capturing a good, seasoned coating. But I don’t have any way to prove it pro/con.

I don’t think bluing matters with regard to capturing a good, seasoned coating.

I agree with you. But as any gunsmith can attest, a good blue job helps keep rust at bay. And, it’s attractive.

this is my Darto N26, first 4mm error batch, , , pan.
it arrived with a sticky gooey layer of machining oils/stamping lube/whatever on it - put it in the oven for a 4 hour self-clean (~1000’F?) clean cycle - all that goop wiped off. 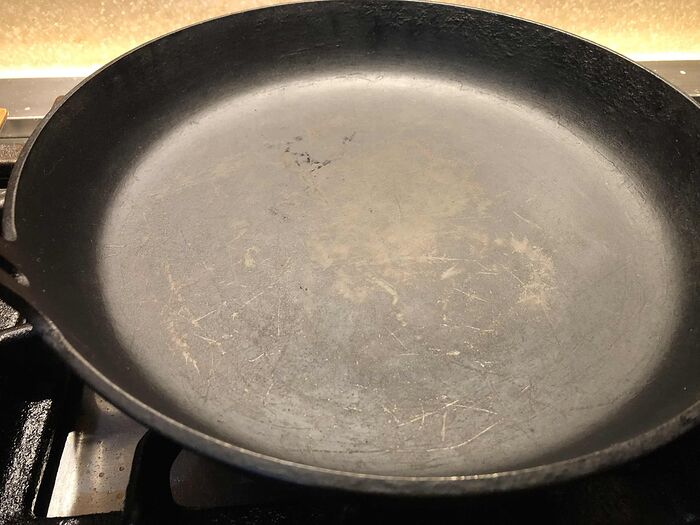 no magic oils, no oven nothing.