Big shout out to this blogger. The post is older but the recipe is spot on and I have tried quite a few versions from various online recipe sources.

However, I’m surprised by the advice to whip the cream. Adding air is not always desirable - isn’t gelato usually a low-overrun formula? Also, whipping the cream could increase the chance of over-churning and ending up with buttery bits. When you whip cream then whip it some more, you get butter. Maybe the blogger has a hand-crank machine and isn’t turning constantly, but putting whipped cream into a constantly-spinning electric machine for 20-30 minutes seems like a bad idea. 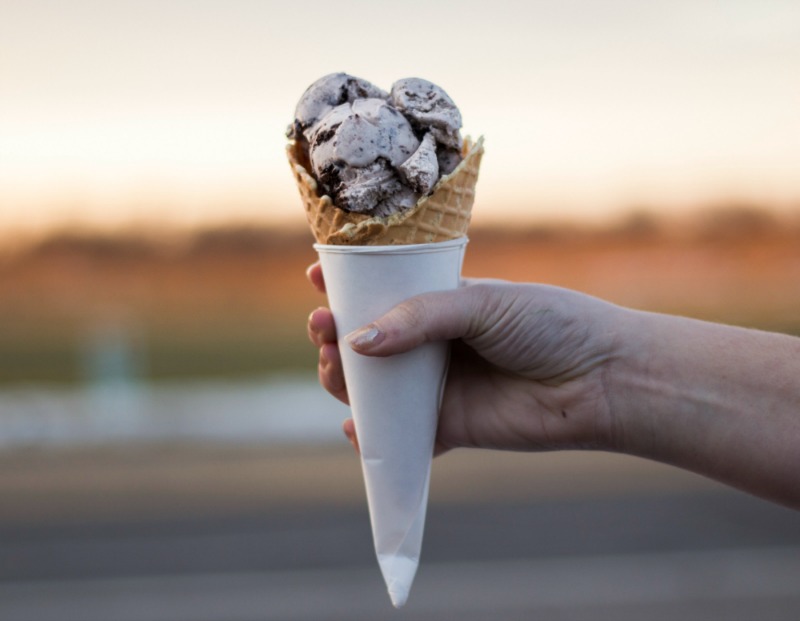 Learn all about ice cream overrun with this quick guide. Discover how overrun is calculated and why commercial manufacturers love overrun so much.

Low overrun ice creams have overrun of 20 to 40 percent, meaning enough air was added to boost the volume of the starting mixture by 20 to 40 percent. These products, such as those made by Haagen-Dazs or Ben and Jerry’s, are quite dense and creamy. Very high overrun products, with up to 100 percent overrun, are double the volume of the original mixture and have a light and fluffy texture. Berkey Creamery ice cream is a medium overrun product, with 50 to 80 percent overrun. Its texture strikes a balance of creamy and fluffy.

By contrast, gelato has very little to no air whipped in. 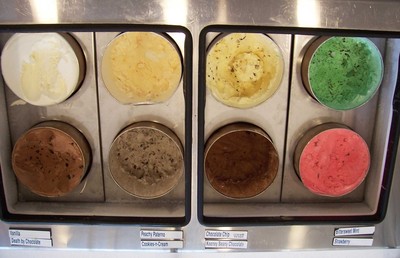 Probing Question: What is the difference between ice cream and gelato? | Penn...

"The basis of all frozen desserts is sugar syrup containing various characterizing ingredients and flavors," said Bob Roberts, head of Penn State's Food Science department. "When only a flavor -- and no dairy -- is added to the sugar syrup, the...

I followed her recipe as written both in small batch and then a double whipping the heavy cream both times. I used my electric ice cream maker. Straight off the paddle it was deliciously thick and intense with great creaminess. Out of the freezer later, I got a nice smooth ball off the scoop, no ice crystals and still creamy and deep flavored.

Maybe its not conventional, my ice cream making isnt professional quality, but its very good.

I don’t think the ice cream paddle will whip it more than it already is whipped. In fact, my experience when trying similar recipes has been that the mixture deflates with the paddles and then whips like regular ice cream, as if you had never whipped the cream to begin with. The recipes I’ve tried used milk powder instead of PB powder and corn starch instead of rice flour, so I can’t say if those make a difference.

I have PB powder and rice flour to use up so hopefully I will try this recipe soon!

This black sesame ice cream recipe is made with coconut milk and is vegan and tastes like soft serve ice cream.

My wife printed out this recipe which is a vegan version with a completely diff set of ingredients.

Huh. But then I’ve never tried folding whipped cream into my custard before spinning. I have over-spun ice cream in plenty of commercial machines, at one restaurant I had this nice Carpigiani ice cream machine that only took about 7 minutes per batch but if it went a minute too long I’d get butter. Those were sad occasions. But maybe my base had more fat and the machine spun faster.

I’m glad this seems to be working for all of you, may you never have the disappointment of over-spun ice cream! 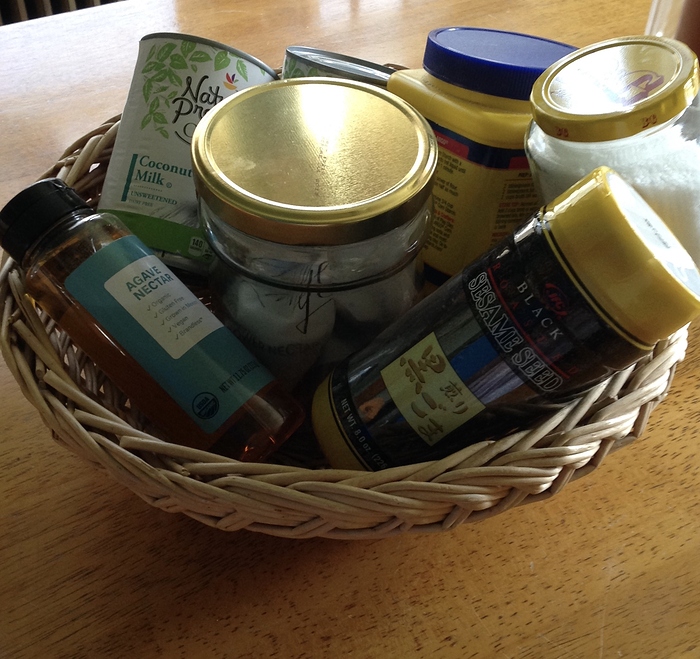 I’m going to give this recipe a try later today. I had all the ingredients on hand. Pantry sweep. My wife was interested in a vegan version.

Put this together over the wknd. Very dense and nicely smokey. After I churned the batch I sprinkled some whole toasted black sesame seeds in by hand. I liked using coconut milk which added a nice smoothness.

That sounds awesome. Black sesame is so common in Asian desserts, I’m surprised it hasn’t made a bigger jump to Western desserts yet. This makes me want to buy an ice-cream maker.

The (happens to be vegan) version I linked above was outstanding.

Might be finally catching on, with the instagram black food fascination there were more places with black sesame ice cream this summer, pattiserie chanson is known for a black sesame Kouign-amann and black sesame soft serve.
I discovered a delicious slightly sweet korean thick hot beverage with black sesame, just add hot water to the packet, really delicious stuff!

On my way over now.

K, just relooked at it and it’s actually “black sesame cereal”, which explains why it’s so thick! Hahaha, whatdoiknow?? I usually use just half a packet with boiling water because it’s also somewhat sweet. Intense wonderful sesame flavor and a dramatic black color.
I bought it at H mart, but it was made in Taiwan, however i think the writing is korean…?? 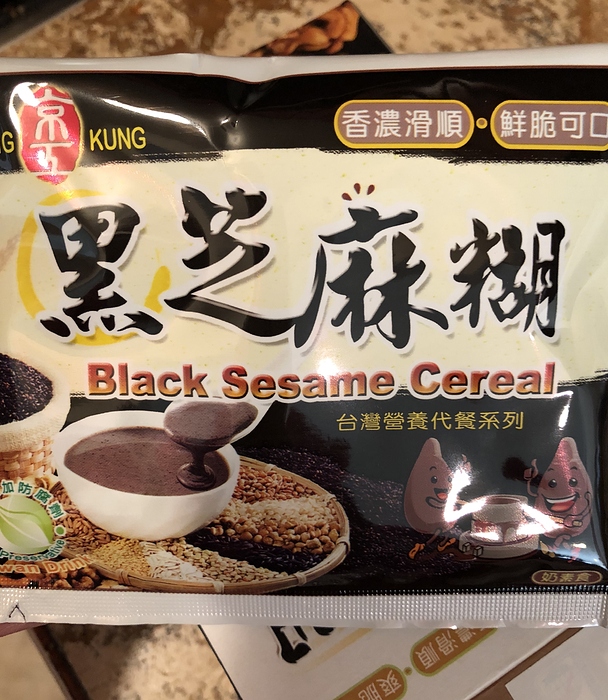 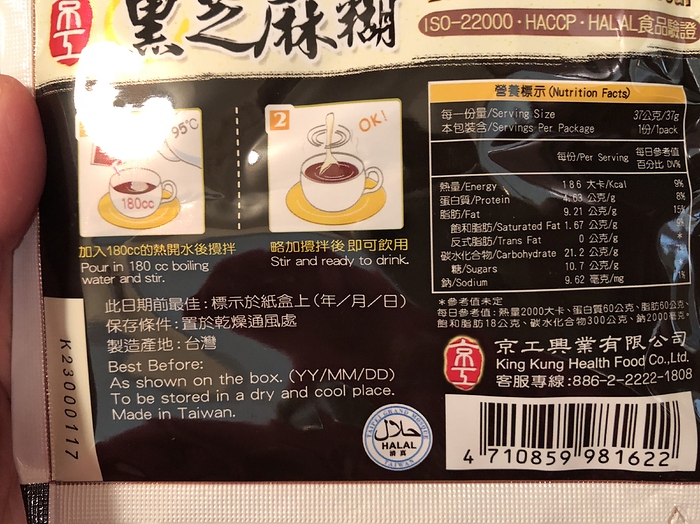 i just noticed the cartoon sesame seeds (??) on the lower right corner that look like the poop emoji!! Hysterical!

Very funny! Looks like soupy pudding consistency. But I eat black sesame paste out of the jar like pb so no judgements here. There is an HMart not too terribly far. Next time I go…

where do you get black sesame paste in a jar? 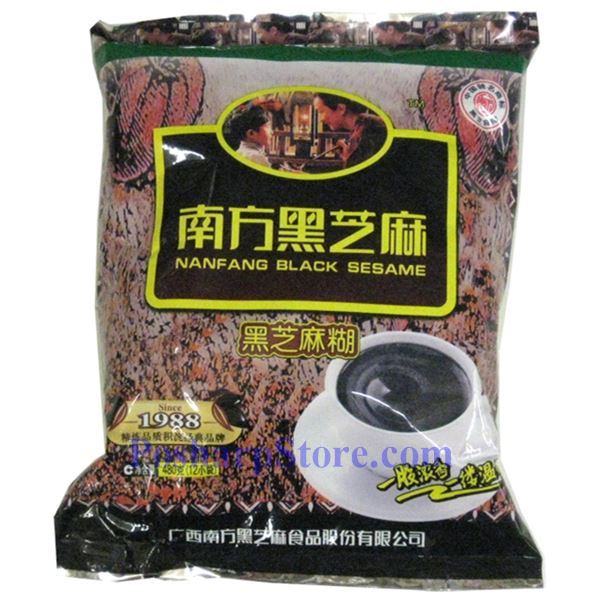 Black sesame paste is a thick, tar-black puree of roasted black sesame seeds. It can be eaten directly as thick soup or as a spread for toast, or stirred into soy milk for a tasty drink. Great for your daily healthy

This one too but its thinner consistency.