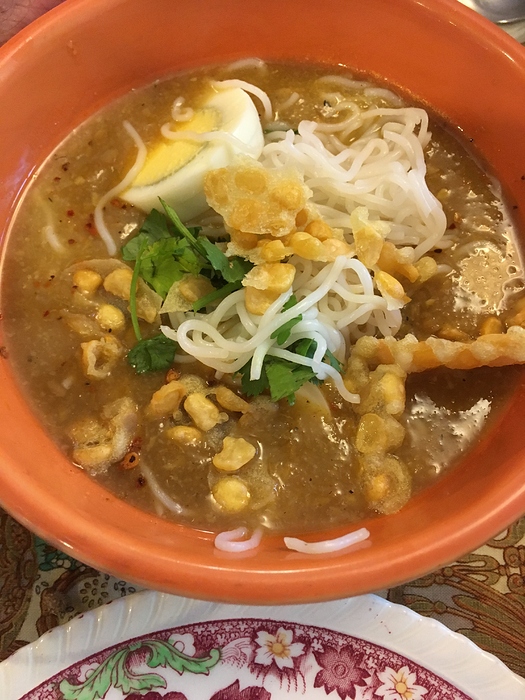 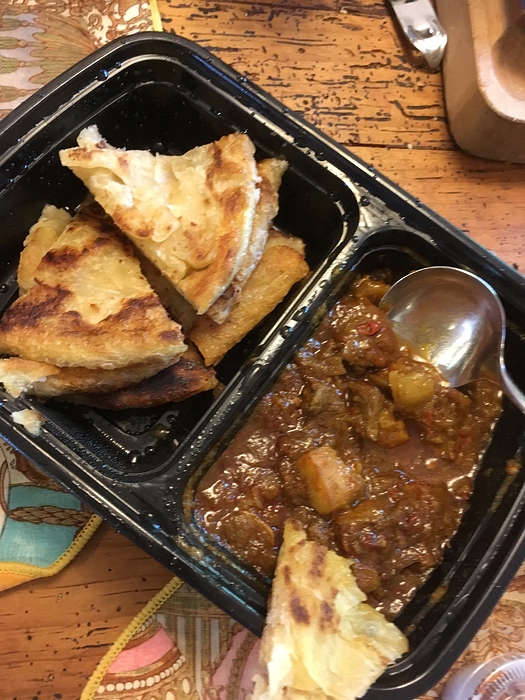 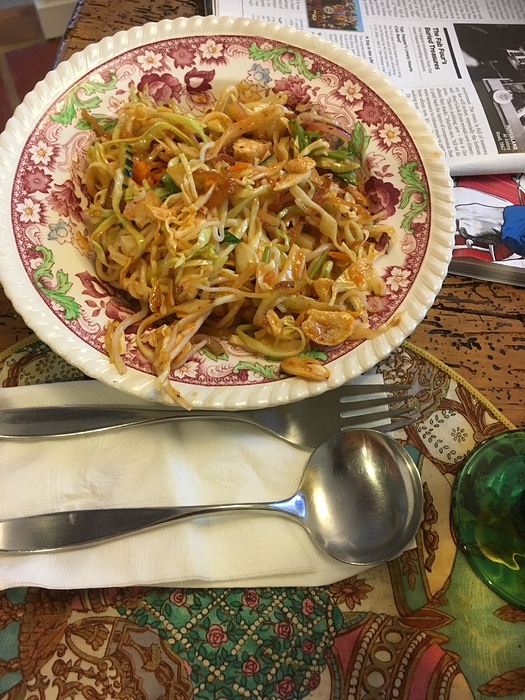 The far north east Bay Area (Vallejo, Benicia) has a dearth of good authentic Asian restaurants. So the opening of a good Burmese restaurant in Benecia is especially pleasing.

Aung Maylika is a small nondescript restaurant in a little strip mall in Benicia. It’s only been open for about a month and they are still working on getting a liquor license. We have been there two times so far. The first time we went with friends and this weekend we got take out. Both times were excellent. Here is what we ate:

Somosa Soup. Excellent. Complex well spiced broth. Spicing was interesting with complex flavors including clove. Not as heavy as some versions I have tried.

Lamb curry. Excellent. Very spicy dark curry with layers of complex flavors and a prominent note of cloves or allspice.

Catfish soup. Even better than the somosa soup. Very deeply flavored and satisfying. Would order this again in a second.

There is also a kind of fried flat bread on the menu, I forgot the name of it. Somewhat similar to versions I’ve had at Malaysian and Indonesian restaurants. You can order it with a side of different curries. We ordered it with the lamb curry and it was delicious. Next time we decided will get the curry with a side of the flatbread

2 posts were merged into an existing topic: Burmese Food in the SF Bay Area

Nice to hear a great option (even if its far for me). How do you rate it against other better known Burmese options like the old (or the new) Grocery Cafe, Little Yangon, etc.?

Who has the best mohinga around?

I believe the Burmese call it Palata. Also know as Parrota in South India and Roti Prata Singapore.

Also Balada, Platha and other transliterations.

We haven’t been visiting Bay Area Burmese restaurants on a regular enough basis that I can confidently evaluate which are the best.

Last time we had Mohinga was at Grocery cafe. The version at Aung Maylika was better.

Is the new Grocery Cafe open in JLS?

I don’t recall a great difference in the broths of the dozen or so versions I’ve had. They tend to distinguish themselves more by their toppings.

To be truthful, the best Mohinga I’ve has was made by cooking moms at the annual Thingyan (Burmese Water Festival) in Union City a couple of years back. It was sort of a luxe version with nice chunks of catfish in it. The restaurant versions seldom cough up much in the way of fish flesh; it’s all about cooking the flavor into the broth.

I’ve been here three times. The tea leaf salad is great. If you live out this way it’s great to have Burmese food this good close to home. I can say it’s one of the better options for Asian food in this area.

I hear they’re opening for dinner this Monday.

They got a branch in Pleasant Hill now.

Excellent. The owners told us earlier this year it was in the works. It sounded like it will be a larger more elaborate place than the Benecia location. We are still loving the Benecia place, we get takeout from there about once every two weeks, sometimes once a week.