Are there any ways to make the burner of a stove hotter?

I have an old Wedgewood gas stove with 4 burners. 2 large 2 small. I like how the stove looks- it came with the old house- and how sturdy it seems, but even the 2 large burners are not really that hot. The burners don’t seem to get hot enough to sear meat properly, so it ends up more like half searing, half steaming.

Question is, is there any easy way to make the fire bigger/ hotter? without hacks that is that will risk burning down the house…

Google a company that specializes in Wedgewood stove service and repair. It may be as simple as cleaning burners, adjusting burner flame height, or replacing burners or lines or pressure regulator, or kinked gas lines. Google your model number for the manual. It will have maintenance and trouble shooting info.

Can’t help with the problem, but as JMF said, somebody expert in this stove can help.

Never used a Wedgewood stove, but find it pleasing to the eye.

Yes, agree that you should try having the stove cleaned/tuned.

Past that, what are you searing on/in, and what is your preheat like?

The top burners usually have brass nipples with a sized orifice to meter the amount of gas going to the burner that sometimes gets corroded. It can be cleaned out or even drilled slightly larger. Then you have a window, usually just after the orifice nipple but before the burner head, called an ‘air shutter’ that adjusts the amount of air that mixes with the gas.

I’ve done it on old wall furnaces that had aluminum burners, as well as stovetop burners and even oven burners. And you could even change the burner head out if Wedgewood had a larger one (more flame holes). Not that you’d want to do any of those modifications yourself. But it can be done.

This is interesting. Do you think makers offered larger burner heads for commercial models or something?

I can see doing this on some modern ranges that already have variously-sized heads (e.g., 18k, 14k, 9k).

Thanks. The instructions from that page sounds like easy enough to do. After the holidays let me take a peek at what’s under the hood.

I don’t know Kaleo, except for my Bluestar and Garlands, and some recent Capital open- burners, there are various sized burners for different BTU ratings. In fact some people wanted smaller ‘simmer’ burners and would epoxy their burner holes up and install a smaller nipple- eventually Capital just made a new smaller burner- same size, fewer holes. And yes, I know of people buying and installing different burner heads on their gas ranges.

Bluestar uses the same burner head for their 10, 15, 18, 22, 25K burners and just varies the number of holes. The 18K and 22K even have the same holes, they just increased the orifice size at the brass nipple. And yes it’s frowned upon, because it is after all gas. I’ve played with some mid-1940’s Magic Chefs that had cast iron oven burners, and yes, the port or nipple would clog up. decreasing the oven heat That port was actually adjustable for opening size. I never checked the stovetop burners… With wall furnaces we would remove the burner heads and use a sharpened nail to clean out the port. (We live in and co-own our own apartment building cooperatively- very Berkeley).

The Wokmon still isn’t out, but for wok cooking, is promising according to Kenji

If all else fails, buy an electric coil hot plate, or an induction burner. The former are dirt cheap, the latter can be had for <$100. Also, you’ll maximize heating with your weak burners if you use cast iron pans. 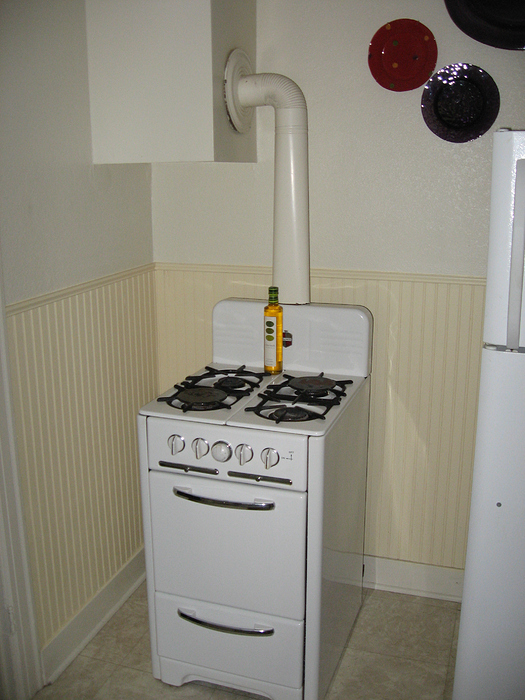 Here’s a picture before i moved in. I personally think that it looks more handsome than in the picture just because it was not a great pic. I think in the next week or so I will try to see if I can adjust the flames.

BTW, does anyone know if that tube on top is the ventilation for the oven?

That is an oven vent that leads to the outside. New gas ovens are vented back into the room, now considered safe enough to not be vented outside. And the vent also keeps the kitchen cooler in Summer. That looks like a 24 inch model and maybe old enough that the oven has no standing pilot. Do you have to light the oven each time you use it? It’s in remarkably good shape.

Hey you could install one of these: 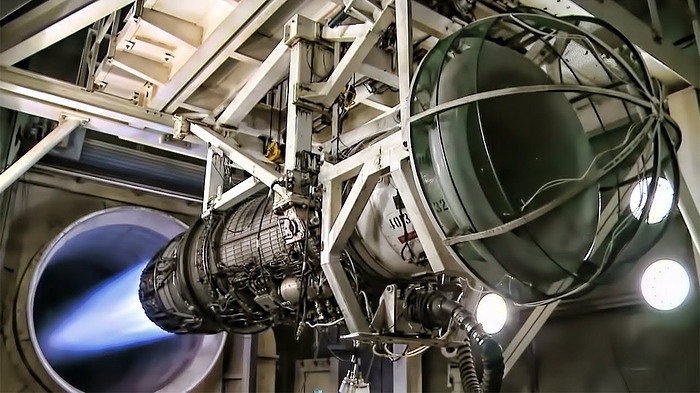 I hear GE is running a black friday special.

I need to find myself a T-rex to sear with that thing.

By the way, nice stove. I hope you get it fixed soon.

I was referring to vintage stoves made before the era of 3-4 different burner heads. In other words, could you buy a Wedgewood new with more than one size head, or were there OEM higher-output heads intended for institutional use?

That is an oven vent that leads to the outside. New gas ovens are vented back into the room, now considered safe enough to not be vented outside. And the vent also keeps the kitchen cooler in Summer. That looks like a 24 inch model and maybe old enough that the oven has no standing pilot. Do you have to light the oven each time you use it? It’s in remarkably good shape.

Ah- that’s what I thought. We actually took out the ‘box’ and the vent pipe that was above the stove, and replaced them with a hood.

The oven indeed doesn’t have a standing pilot. At the time I hadn’t used an old stove before. So took me a while to figure out why the oven wouldn’t light up, until the kitchen started smelling like gas.

Now after a few years of use, I’d have to figure out a good way to properly clean the surface of the stove. The white surface is getting a bit discolored, unfortunately.

Now after a few years of use, I’d have to figure out a good way to properly clean the surface of the stove. The white surface is getting a bit discolored, unfortunately. 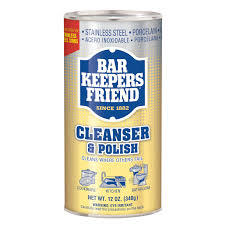 It’s oxalic acid. The stuff is awesome for polishing metal and enamelled surfaces, and it does not scratch. Works great on copper and brass too.

You may need to use a little elbow grease as well if it’s been a while.

I agree Bar Keeper’s Friend is a good product. I think it will be useful to find out how/why sck white surface is discolored. For something, acids are good for cleaning. For other things, I find bases like ammonia cleaner, are better.

If it is oil residue, then I recommend a base.

But I have a similar stove and bar keepers works best on it.

Speaking of windex, did you ever see my big fat Greek wedding?