Following up on @digga’s ode to Reliable Market in Somerville, I thought the Armenian markets in Watertown should get an ongoing thread. They each have their strengths and specialties and it can take a long time to work through all their varied delights so let’s pool our knowledge here – we’ll all benefit!

Yesterday I popped into Arax and discovered they are making their own taramasalata, which I had not seen there previously. Unlike the housemade versions at Sevan’s and Sophia’s Greek Market in Belmont which are both quite moist and soft, Arax’s version is drier and has more body. It is more like what I used to get in the UK. I found it delicious. I also got old favorite nivik (Swiss chard and chickpea stew) in the refrigerator case and stocked up at the olive bar.

I really need to make a field trip to these Watertown markets someday. For anyone further north in Merrimack Valley land, my go-to is Korbani’s Bakery in Methuen. Fresh pita, hummus, stuffed cabbage, lamejun, spinach pies, kibbeh and the like made on the premises. We stock up every week or two to make weeknight meals easier.

Do the markets in Watertown yield similar delights, as I imagine? Making myself hungry by typing this.

All those things except I don’t think they make pita on-premises. Maybe Massis does, they are called “Bakery” not “Market” like the other two. And I probably should have added Eastern Lamejun, nearby in Belmont, to the original post. Their lamejun are my personal preference over all others.

Good intel on the place in Methuen!

Great idea for a thread. On the pita question the great StriperGuy of chowhound (what became of him?) had started an Amenian bread thread on CH. It’s nearly 11 years old, so not all the information might be accurate, but it’s still an interesting read.

when I make this run, I always at least get lamejun, baklava and grape leaves at Sevan. I also usually get taramasalata here, though I’ll have to try the Arax version! I think most of the desserts are pretty good, and I also like a couple things that they have on top of the deli counter that I’m not sure of the names for. One is like a soft circular round of dough with feta and other stuff on top. They also have these really good cracker-y things that are covered with thyme and other spices.

I did have a little sticker shock when I bought lamejun the last time though, as these are now 20$ a box! I remember when they were nine bucks.

At Arax I generally buy beet hummus, pita bread, some stuff from the pickle bar, baba ganoush and one or two other things that strike my fancy from the case in the back with all the assorted homemade fare. There’s also a dessert there I like that again, I’m not sure of the name–it’s little squares with a sort of cornmeal like consistency that is soaked in rosewater syrup.

I also always seek out a kind of Danish feta that I love that they carry that comes in a red and white package. (in fact, the gf & I just finished the one from our last trip there–time for another trek to Watertown!). The fresh fruits and vegetables are always worth cruising through at Arax as well–have gotten good deals there in the past on things like blood oranges et al.

Sadly, as I’m usually at well over a c-note down after Arax and Sevan, I generally skip Massis. I used to go there once in a while, but always found the other two markets better. Would love to know if they have specialties worth stopping in for.

Side note; if I’m down that way and haven’t scarfed a slice at Stella’s before going shopping then the falafel rolled in pita with tomato, lettuce and turnip pickle at Fordee’s is a reasonably good cheap lunch. If it’s a Saturday, though, the Shangri La/Eastern Lamejun combo also works before hitting Arax/Sevan.

the great StriperGuy of chowhound (what became of him?)

Sigh, I wish I knew. He’s someone that I really wish we could have gotten to come over here from Chowhound. His picks were always gold.

I really need to make a field trip to these Watertown markets someday. For anyone further north in Merrimack Valley land, my go-to is Korbani’s Bakery in Methuen.

someday I’m gonna make a field trip to Lawrence/Methuen, and I’ll be looking your way for tips!

We just had a feast from Arax and Sevan last week, with the addition of the chicken shawarma recipe from the NYT. We like all three places, but shop mostly at Arax and Sevan.

Here’s a link to an episode of the old Neighborhood Kitchens show from WGBH. Hopefully it is accessible for everyone. It’s really fun.

Here’s a quick list off the top of my head, with some input from my son:

Massis:
small spinach-feta breads are delicious when they are really fresh

The grape leaves at all three are delicious in their own ways.

For the photo below, starting at the top, a simple Greek salad, sheep cheese borek from Sevan, pita from Arax, vegetarian cabbage roll and roasted brussels sprouts (with aleppo pepper?) from Sevan, white sauce with cumin and garlic made from Labne from Arax, and the NYT chicken shawarma. A little home cooking and a lot of help from the markets made for a nice meal. 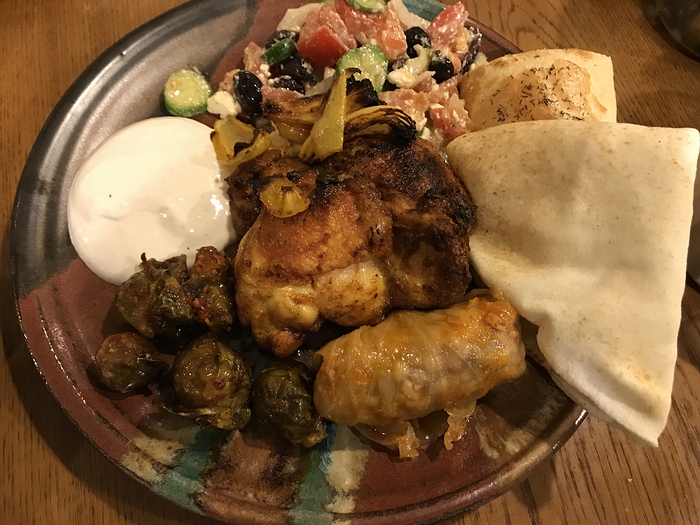 As much as I like Arax that’s the one thing I really dislike about the shop - so much stuff in their refrigerated section is often made 2-3 weeks ago (and quite often beyond the date).

That’s true. I spend quite a bit of time looking for the freshest date, and sometimes pass altogether. Several years ago, they didn’t date things at all so I bought everything at Sevan. Now I only buy things made recently.

I’ve looked at that recipe before. Looks like maybe you used bone-in, skin-on thighs? That was my instinct when looking at this recipe. Your dinner looks fabulous!!

There were no boneless thighs available at the farmstand I shopped at, so I bought bone-in thighs and took the bones out. The recipe calls for skinless, but I love chicken skin so I left the skin on and stuck them under the broiler at the end. They weren’t super crispy, but had enough crunch to be worth it. Totally not necessary for the recipe. It’s a tasty and easy recipe.

Hit Sevan yesterday and picked up vegetarian cabbage rolls and fasulye (gigantes beans) at @bear’s recommendation, both really excellent and will be on my list for the future. I also got jajek (or something like that) which is basically a labne version of tsatsiki – I didn’t care much for it, heavy with mint, light on the garlic. All 3 added to a roasted chicken thigh and roasted cauli it made for a very beige but tasty dinner.

Thanks for the report. Glad you enjoyed what you got! Oh, and thanks for the proper spelling of fasulye. I knew it was different from the Lebanese version, but couldn’t remember. The Arax version of the jajek (pretty sure they just call it tzatziki is also quite thick, probably made with labne. I usually add some lemon and salt to thin it out and season it. It’s a nice shortcut. I can’t remember the garlic level, though.

Sevan is one of my favorite little spots. It’s the odd things that I wind up going for, though. The olive bar is outstanding, and the garlic-and-lemon olives are the best I’ve found in town. When I get them, I also tend to load up on the oil that comes with those olives, which is great for dipping bread in, even can be used in making hummus and other stuff.

They usually carry a Turkish brand called Tunas, which makes the best strawberry and fig jams I’ve had in North America. Ingredient lists are simple, the strawberry jam is filled with big, recognizable fruit, and the jam isn’t sickly sweet. Unfortunately I appear to be alone in my regard for this stuff; they’ve had trouble selling it and have not always stocked it. I also use Tunas for my tahini paste, which is runnier and oilier, and works better in Sichuanese cooking than the standard Joyva.

Their baklava is made in house, and pretty much every variety is stricly to die for.

And the quirkiest thing that I’ve found there is Dalan olive oil soap. It’s a Turkish traditionally milled olive oil soap, and every bit as good as the far pricier Provençal bars that you find elsewhere.

the strawberry jam is filled with big, recognizable fruit, and the jam isn’t sickly sweet.

oh, I’m buying this Tunas stuff the next time I go. Sounds right up my alley. Thanks for the tip.

I had no idea you could even get taramasalata here! This is why the boards actually work…thanks so much! I’ll add a vote for Sevan’s etch salad. So savory and delicious!

Always wondered about Striper Guy. Chris Schlesinger and Steve Johnson both loved to fish - they shared a boat at one point. You don’t think…could it be?

If I recall correctly, striperguy had a baby and moved to the burbs…then maybe left Mass. altogether? He also talked about living in Spain as a teen/child, and I don’t think either Chris or Steve did. I think Steve studied in France for a while.