Any places serve a good bowl of chili in NJ?

I know there are places to go get chili… like Cincinnati for example… but where in New Jersey can I find a good bowl of chili? I’m in central NJ, but it doesn’t matter… I’ll travel anywhere in the state or surrounding states.

I saw a reply and you had me all excited for a chili joint to visit!

@NotJrvedivici. Can you help our new arrival out?

Thanks for thinking of me to try and ad some value here, but sadly I’m coming up empty. I know Huddy’s in Colts Neck just had a chili cook off over this past weekend, day late and dollar short for @yuppicide. (sorry for tagging you only to tell you I’ve got nothing to offer) Welcome to HO by the way, hopefully your future inquiries will turn up better results.

Would love to find a gOod chili place around these parts

Welcome aboard. Try the turkey and black bean chili at gas light in Atlantic highlands. It’s a seasonal thing so it might be coming off the menu soon as spring rolls around.

Also, I’ve only had it in long branch but the chicken chili here is good.
http://www.oceancafenj.com/menu.html#soup

For beef chili I’m not really thinking of anything great. However, the windmill chili is decent but I prefer some chili cheese fries over straight chili there…or chili cheese dog.

Oh the beef chili at chubby pickle is not bad either.

One more…local smoke chili has been a special side item lately . It’s pretty good and served with raw chopped red onion topping and cheese. I wish it came out hotter but for a side with some BBQ it’s a decent rendition. I spice it up with some of their hotsauce.

C’mon man…there is ONLY beef chili.

One more…local smoke chili has been a special side

I’ve only had this once and was not very impressed with it. It was VERY dry and as you said I used a copious amount of their hot bbq sauce to help get it down.

I thought the chili at Local Smoke wasn’t good. It had a sweetness to it and upset my stomach.

Beef chili is the only way to go. Although I like other meat just not chicken and turkey.

Sometimes I’ll go to Texas Weiner places and order a side of chili just to eat. These don’t have beans in them. If you don’t know a Texas Weiner is a hot dog with onions, mustard, and meat sauce. The Middlesex Texas Weiner is pretty good. They’ll sell their sauce to go or you can get it in bowls there. Bridgewater Red Tower III closed, it was an option for late night, but wasn’t my favorite. Red Tower I in Plainfield, NJ is really good. Pretty spicy compared to some others. He sells me a cup for $3. It’s around 12 ounces or 15 ounces… not sure what size the cup actually was. I had it last weekend and am craving more.

I’m gonna go visit Texas Weiner I in Plainfield. I want to see if it’s the same recipe as Texas Weiner II on Route 22 in Green Brook, which closed.

It’s not chili really more of a meat sauce, but it’ll do if you’re craving chili.

I actually copied this from the Local Smoke thread on here, at the time I posted my disappointment in the chili. As the picture clearly shows it’s more a pulled brisket-n-beans than a chili or anything in the “soupy” category. 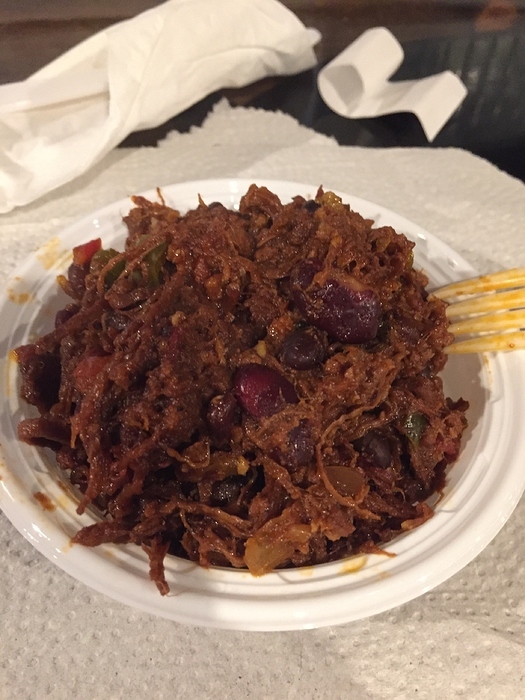 Actually as I’ve continued to contribute to this thread I just realized about the only “local” place I’ve eaten decent chili from is Wegmans. They have a decent beef chili in their soup carousel on most days and it’s certainly passable, better than any others I’ve had out.

I’ve had it 2 times and it didn’t look like yours at all. Hmmmm…I guess they might have some different versions or cooks

Well that was back in October so maybe they have improved it since. As you know I’m a big fan of this place in general, as the matter of fact my post regarding this at the time said it was my first disappointment with anything here.

You are correct. Yikes!

I’m wondering if Jersey Shore BBQ has chili…it’s not something I order so I’ve never noticed, but worth asking! They may do it as a special, and if it’s Texas style that means it will contain some of their yuuuuummmy brisket…

I go to the Belmar location but they’re on the verge of opening in East Brunswick as well.

Wow this is a really interesting question. I love chili, but I just realized that I practically never order it out.

I have absolutely no reference for this since I almost never order Chili, but I do recall enjoying the version at All mixed up in Ocean. It’s by no means a destination chili, but rather the most generic form of it done quite well and very well balanced.

Chili seems to be a complete afterthought in the NJ culinary mind. The only time I get it with any regularity is when I’m skiing.

I declare a HODown chili battle!

I am certain I make the best chili in my house, possibly on my block, and perhaps in all of Monmouth County. If anyone is game I say we all enter a chili cook off coming up and let the judges decide. Might be fun

I’m game. Let’s just make the rules clear for the Chili nazis. I say let’s do a generic bean Chili comp rather than Texas style but that’s just me.

The best local chili I’ve ever had is the one prepared by Drew’s Bayshore Bistro. I seem to recall that they have won the Keyport Chili Festival many times. That being said, I don’t recall the last time I’ve seen it on the menu. Good Luck.