A recent trip up to the other end of the Monmouth County coastline had us finally taking the advice of the northern faction of the family and stopping by this restaurant. While I may sometimes question their choices of neighborhoods, I’ll have to stop questioning their choice for this type of Italian food.

I’ll omit much discussion of appearances or FOH issues beyond noting that this Ocean Avenue joint is efficient, comforting, and welcoming - traits similarly exhibited by its staff. Now, onto the important stuff . . . .

We ordered quite a bit of food for two, mostly from the excitement borne out of trying a new spot. Appetizers were a cold antipasto of Italian Meats, Pecorino Tartuffo, Crab-stuffed Mushrooms, and a Fennel Salad. The Entrees were a massive Veal Chop and the Angry Lobster. A small cup of Honey-Fig Gelato seemed like a good idea as a sweet, final taste.

Simply stated, I was impressed with everything I ate - and I pretty much ate everything. The Pecorino app was stellar. I had forgotten what a lovely chord the taste of those three notes - aged sheep’s milk cheese, black truffles, and honey - could sound as they reverberate across the tongue. Frankly, my biggest mistake of the night was not ordering a second plate.

The antipasto meats were all cured - prosciutto, salami, sweet and hot capicolla - and the sort of offering that always tends to get my attention. The meats were room temperature - avoiding that all too common mistake many kitchens make with this simple offering. I hit up the bread basket a bit with this - good, rustic bread served with a slightly peppery olive oil (probably as peppery as one would want to serve to a diverse public, but not the kind of “scratch the back of your throat” stuff I like to keep at home).

The stuffed mushrooms may have been my least favorite dish of the night. The elements were certainly present - decent chunks of crab, not much breading, a rich-yet-balanced sauce both buttery and lemony - but, something about it seemed to get stranded at third. I’m thinking just a bit of salt might have helped, which suggests that the problem may have been with the order in which we gorged. This delicate dish probably didn’t stand much of a chance after the cured meats and pungent cheese.

The fennel salad, consisting of the anise-hinted root, baby arugula, toasted walnuts, orange sections, and more of that lovely pecorino was dressed gingerly with a shallot vinaigrette. The acidic-honeyed balance and freshness of the greens cleaned up our palates perfectly for the richness that was still to come.

The porterhouse-style, 24 ounce veal chop was wonderful. I ordered it to be done at whatever temp the chef recommended and was informed it will come “medium”. Honestly, I’m glad I did. The behemoth was perfectly pinkish in the interior - a doneness I’ve seen categorized as “medium-rare” at many other restaurants. There’s not much more to say about it than, this is a meat-guy’s veal chop. Oh, and one tip, tell the server you have a dog - that way you won’t have to miss any morsels and can gnaw at the bone in the car without any shame.

The Angry Lobster was likewise delicious. The chopped pieces of a whole, pound and a half lobster, sautéed in a dry chile-flecked, fruity olive oil worked a tasty ying-yang balance. The bug’s sweetness balanced by the chiles’ heat. If we were to order it again, however, I think I’d ask for a thicker pasta for the bed. Papardelle might be better than the
spaghetti noodles ordinarily offered.

The house-made, gelato was a perfect finish. Just gently sweet, the figs chunks were able to retain their inherent flavor. A couple, little scoops were all we needed to cap the evening’s experience and left the tastebuds a thought to savor for the ride home along the Atlantic.

All told, we had a great deal of food for two - but, took a great deal of pleasure from the meal. The tab was one fifty-something before tax and tip, as the place is BYOB.

The vagaries of geography may mean some time will pass before we get a chance to go back, but one thing is absolutely certain. So long as Angelina’s is around, there’s no reason to set foot in Undici ever again.

Glad you enjoyed it, I’ve had that veal chop several times and it never fails to please. FYI The Dive next door is a pretty good casual place for drinks and food, haven’t eaten there yet but have heard plenty of good things.

Z man, whats up buddy? Angelicas is doing really well. You need to book a weekend reservation like 2 weeks in advance.

Veal chop or pork chop? I always get the porkchop

Hey Johnny, welcome to the new digs. Good to see you. We’ve been goofing off here for a while - 'bout time you followed the trail of breadcrumbs.

As to the chop, it was veal. I didn’t notice pork, but I’m partial to baby cows.

LOL, yeah Im a little slow and didn’t get the hint until a nice fella told me today.

That was the least that fellow could do. Especially, when you consider that he’s the one who keeps eating the breadcrumbs. Then again, maybe it’s partly my fault - I’m the guy who insists upon using only freshly baked babkas.

Im bumping this up. Has anyone been lately? I went last night. Will report more but all around another great pork chop and experience.

First of all, I’m so excited to see that there is somewhere more active and interesting than Chowhound for the NJ scene. What a relief!

I’ve been here probably about 6 times in the past year. The food is always better than average but they really need to figure out their reservations. Sometimes they will take any reservation which results in a VERY long wait because they over booked, or they tell you they have nothing available yet you sweet talk them and you are nearly alone. Very odd.

Welcome gracieggg!!! FYI there is a “welcome” thread for you to tell us a little more about yourself;

Let's introduce ourselves and get to know one another better Stickies

This is an idea that ElsieDee suggested in a separate thread that I found to be helpful to really get to know one another better and adding a human touch so we aren’t just a user ID to one another. So let’s write a short intro of ourselves to the community: Where are you? What food-related topic are you most passionate about, that you want people to ask you about and you can’t stop talking about it? What’s a great food experience you have had? A little tidbit about you I will start off: Sa…

If you don’t mind me asking how did you find us? Welcome again and I also agree with you assessment of Angelica’s.

Hi! I posted on the thread you linked.

I found this site because I actually posted on Chowhound about Fromagerie and didn’t get any responses. This seems to be a friendlier site with more activity. Also, after they “upgraded” the site, it just hasn’t been the same.

So did you hear about Hungry Onion on Chow or somehow else like a Google search?

Sorry, I didn’t answer you question! Yes, I found this site through the power of Google!

Yeah it is great to see some nice action on here. Chow hound is dead as can be.

So my double cut berkshire chop was again superb! It wasn’t the biggest cut this time but the flavor and tenderness of this pork is downright awesome. Don’t get me wrong…it’s big! I have just had some monster slabs here. It rivals great steak and I’m a steak guy. I gave a slice to my dad and he says “wow!” They were both really impressed with their dishes (lobster ravioli special and veal saltimbocca.) One new thing I noticed was the sauce is a little different. They definitely boosted the butter content. I’m not complaining 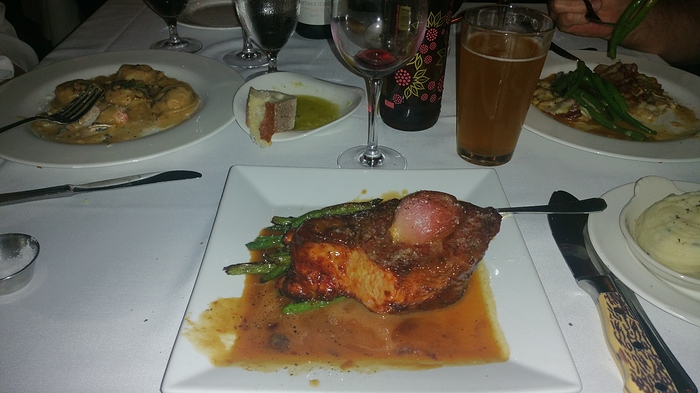 I’m telling you CJ try the pork chop at Woody’s!

I’ll get there soon but I think the ribeye is on my list!

Going to Anjelica’s Sunday. Sounds like I should order the pork chop??

I also enjoy the veal chop.

Yes Seal, I am not letting you down on this one buddy. I think you will really enjoy it. FYI, I sub out the broccoli rabe and get green beans and mashed potato.

FYI, the chop takes up to 45 minutes to cook so I order it right when I get there. (the others arent held up that way.)