I’m looking for a responsive frying pan to balance out my sluggish electric stove. After comparing a few copper pieces I found a line called All-clad G5. G5 has a graphite core in the floor of the pan, and is described as being lighter and more responsive than copper.

What little available information seems positive, but I’m wary of the marketing speak. The low availability and limited lineup could be a potential concern as well. I can’t tell if the line is abandoned or just suffering from pandemic related manufacturing limits. What does anyone know about G5 or the defunct Chowhound thread?

Oh my. They really made a graphite cookware? This was discussed even during my time on Chowhound time. I must have left before the G5 discussion really took place on Chowhound. 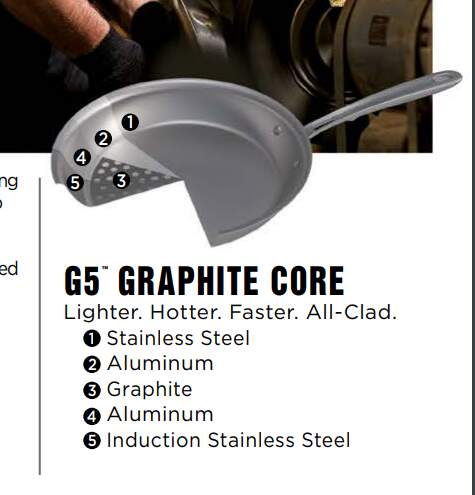 Yes, graphite is lighter and very good at thermal conductivity. However, unlike aluminum or copper or any metal. Graphite has orientation, so its thermal conductivity changes a lot depending on the orientation. I do not know if All Clad aligned the graphite in a specific direction in the cookware or it just randomize the direction to get an “averaged” effect. Very interested in its application. Do I think it is head and shoulder above all the simple aluminum and copper cookware? Probably not. At the end, even if graphite is better… the All-Clad G5 design has the graphite embedded in layers of stainless steel and aluminum. Again, I am not at all saying it is worse, just saying that is is probably not hugely different. Just my two cents.

Do I think it is head and shoulder above all the simple aluminum and copper cookware? Probably not. At the end, even if graphite is better… the All-Clad G5 design has the graphite embedded in layers of stainless steel and aluminum. Again, I am not at all saying it is worse, just saying that is is probably not hugely different. Just my two cents.

Thanks for the feedback. I think we’re on the same page here. The copper I was comparing included Falk Signature, Falk Copper Coeur, and All-Clad Copper Core. These pieces range from .9mm to 2.3mm thick copper not including the other layers of metal. The weight ranges from 3.7 to 5.8lbs.

One of the threads I read described the line as faster, better, and lighter than Allclad D3. The actual weights of G5 pieces don’t seem to be listed anywhere to compare. I’ve got this sort of sliding scale going of weight, performance, and features; so depending on the real world weight of the line G5 could be a big contender for my kitchen. Something to complement my slower Paderno pieces. I’ll have to do some heavy thinking to narrow down where I want to be on the sliding scale I mentioned.

I have the smallest frypan, and I promised on Chowhound I’d do a scorchprint, but unfortunately NoNOBadCat walked on the controls of my induction stove and turned on the burner on which it was resting. All night. The entire pan discolored, and you can see a honeycomb pattern, which I assume is the graphite core. I’m reticent about using the pan now. Yes, I have detailed how I have now cat-proofed the stove.

and you can see a honeycomb pattern, which I assume is the graphite core.

Oh my… I am glad there wasn’t something worst, like a fire.

Nope, luckily. He didn’t know how to turn up the heat. He did, however, also turn on the oven. It’s default is 350F , so nothing stored in it, like sheet pans and lids and such was harmed.

He did, however, also turn on the oven

Ok… there is something going on here.

I have a separate album on my iPhone that memorializes his misdeeds… of which there are many. Thank god for eBay, where I can photomatch the broken stuff.

From what few pictures I’ve found it looks like many of the G5 pieces have the graphite pattern visible in the steel. If you’re worried about the discoloration you could try to boil water in the pan and see what happens. I vaguely remember something about boiling with baking soda or baking powder, but I can never remember which one.

Would you say you were the only one in the Chowhound thread who had used the pan? Do you remember if anyone else chimed in with any solid numbers or facts about the line. It’s completely understandable if you don’t remember.

I don’t recall anyone else actually having used one. The discoloration was inside and outside the pan.

Thanks that gives me a much better idea of how useful the old thread would have been. The line just seems to have a lack of advertising and awareness about it, so I may just need to test it out against my other options.

Try the boiling first, it’s pretty hands off, and should give you a better idea of how well you can clean the outside.

I think G5 is a thought experiment more than a serious cookware line. Remember d3Armor?

Viking tried and failed with graphite more than 20 years ago.

That’s a fair take. D3 armor was hilarious, though I do think this line has a lot more potential than the armor line. You might appreciate this lightly misguided review I found, where the author mentioned G5 heats as even as their favorite cast iron. https://www.reviewed.com/pots-pans/features/all-clad-g5-graphite-core-cookware-re

I remember the hot debate between cladded wall and heavy duty disc cookware a few years ago. Then we saw those amazing hybrid pans with the moderately thick discs and thin clad walls, which seemed to do a pretty great job of balancing in between; but they always seemed to favor that heavy heat retentive Paderno Grand Gourmet/Demeyere proline side of the spectrum.

G5 feels like it took the hybrid disc with clad walls idea, and reimagined it right in between the performance of thin clad and something like Cristel Casteline. I’m probably going to have to be the guinea pig here, but if this line compares favorably or close enough to All-Clad’s Copper Core line, with a decent weight savings; then I can narrow down my choices to just a G5 saute and a 28cm Falk Signature frying pan.

Time will tell on G5. But how long do you think it’ld take to catch on–if it does? I mean, it’s been on the market well over a year… maybe 2?

Personally, I think it’ll flop like Hestan Nanobond has.

Hard to say. If it does perform great it could still end up being the Laserdisc of its day. I just want to see the performance before I make a judgement.

The lack of marketing is confusing. It could definitely be a mix of cost to produce and covid issues. All-Clad could be focusing on maintaining more affordable lines to stay afloat through this confusing economic period.

All I can say is the few words I’ve read from reviewers and customers are very positive about how responsive the line is, but none of them are going to be as big on constructive criticism as we are in this community. If the line is any good this is the exact type of community they should reach out to, but they have yet to do so.

Interesting jab at Ray. Nanobond was fun to look at, but what I think it really missed out on was embracing the nature of titanium. Titanium is used in ultralight cookware for backpacking, but the weight of Nanobond was practically the same as everything else out there.

It would be kind of interesting to see a version of G5 with the steel switched out for titanium to obtain even more weight savings. Obviously not likely to ever happen.

Hestan Nanobond did it right, and I’m still enjoying my 11" nanobond frypan. The ergonomics and the weight have worked out both for me–and for them–and Hestan has expanded to three product lines.

is described as being lighter and more responsive than copper.

Any cheap clad pan will be lighter and more responsive than copper, because there isn’t much conductive material to begin with. So this is not necessarily a recommendation for the All-Clad imho. Does anyone know the aluminum thickness of the All-Clad graphite?

If you are used to the Paderno and want to get something more responsive, then the obvious candidates are, in order of becoming more responsive but losing a little on the evenness side versus the Paderno: hybrids like the Lagostina Lagofusion, actual straight 2.3mm stainless lined copper, and then clad cookware like the Mauviel M’cook and Demeyere Industry.

Well, Laserdisc = Fail in this market. But G5 hasn’t even achieved Betamax status yet.

The cost is silly. The carbon fiber sheet should be dirt cheap. Unless they’re using a slow batch process like diffusion bonding to attach steel-steel through the perforations, the process wouldn’t justify the price, either. I think maybe they ask so much because otherwise it might crosscompete. That’s definitely happened with Meyer’s Nanobond and Thermoclad, virtually identical pans.

As far as response goes, G5 may be more responsive than something else. What are the comparators in the reviews you’ve mentioned.? What is the total volume of steel in G5 (accounting for any difference in a “LEGO” assembly)?

The thing about titanium is that it’s as poor a conductor as SS. Other than weight savings, why bother bringing a disparate nonconductive metal into a pan’s core? If there was some thermal advantage to thick Ti in a pan, why is the Nanobond coating only a few atoms thick?

Major new products are often introduced on a five year cycle, where there is no expectation of sales. In the second five, it’s a whole new ball game. This graphite core is still in the first five years, and any exploring you might carry out would be very worthwhile.