"A Genius Way to Upgrade Your Fried Eggs" 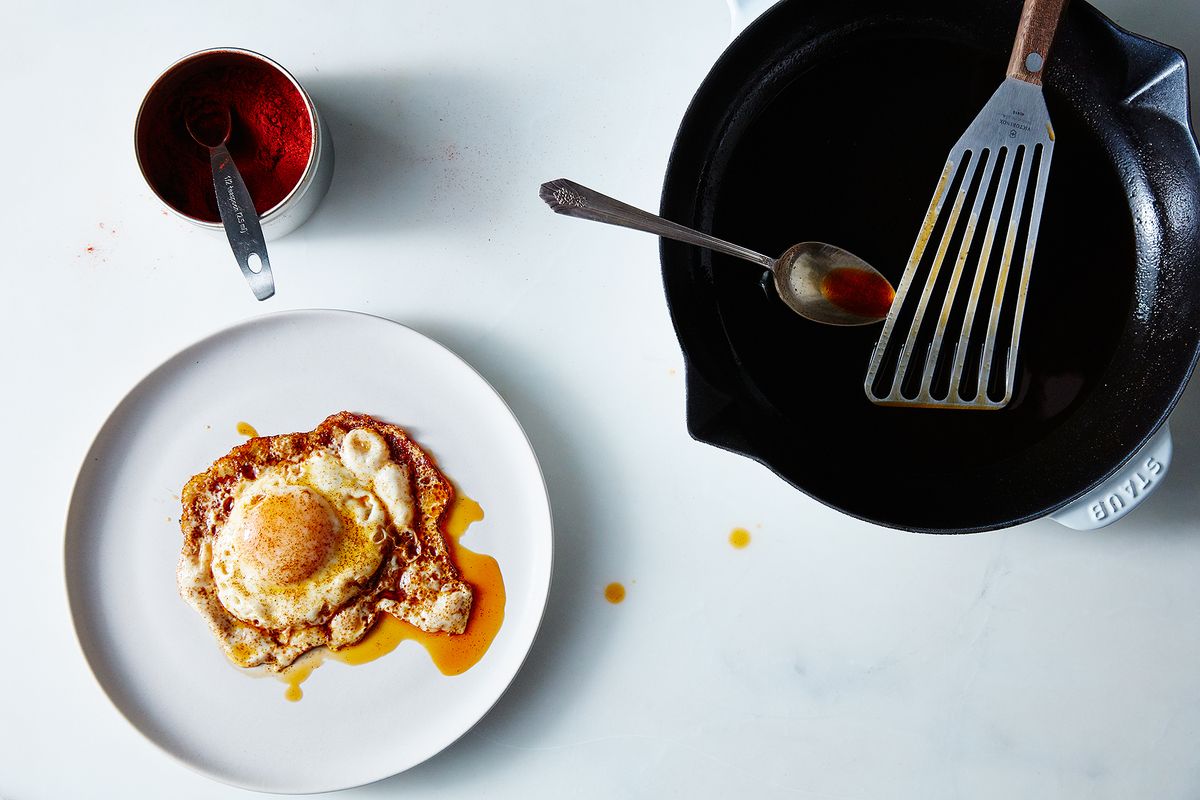 A Genius Way to Upgrade Your Fried Eggs

One tiny change that will improve your eggs in many ways

This sounds SO good!

Would have never thought of smoked paprika - thanks for sending the link. I usually dice fresh tomatoes & basil with the olive oil fried egg(s) – talk about a big mess but very tasty.

I’ll have to do this for DH - he loves crispy edges and runny yolks. I don’t mind the edges, but I want my yolks cooked hard. Also, it’s got to be butter or bacon grease!

Ooh I like that idea too. I’ve gotten hooked on slow roasted grape tomatoes.

Fried eggs have always demanded butter, to me, but I’ll definitely give this a shot!

Slow-roasted grape tomatoes would certainly cut down on the splatter; great plan. Thanks for the idea.

My pleasure. I do them at 225 for two or more hours. Drizzled with oo, s&p and thyme. Then I store them in a little container with a bit more oo. Just added some to a salad last evening. I’m hooked

I’ve got our little Taylor & Ng steel skillet (yes, Mrs. O bought it as a college student ca. 1970) trained to be nonstick if I do it right, and that is (a) heat pan to over 300º, (b) pour in nonsmoky oil (grapeseed usually), and © add nice pat of butter to now-hot oil. When the foaming dies down and the foam is just beginning to color, pour in the eggs, agitating the pan. When the egg mass is moving reliably as a unit, then you can decide what’s next. I don’t usually have enough fat in the pan to baste the eggs, though that is of course an option, and I’m finding the idea of adding oil-solvent spices such as smoked paprika pretty interesting. As I tend to like mine turned over late in the game to partly solidify the yolk on that side, I could simply add the paprika to the fat, turn the eggs over for a minute or so, then back before plating.

I love fish with eggs, and I’m thinking the smoked paprika treatment would go nicely with that.

And I’m liking the grapeseed oil, one I’ve started using more of.

I really, really like grapeseed oil, having gotten grossed out for too long by the smell and residue of canola oil and the taste of peanut oil- no, it isn’t flavorless.

A different topic but it’s funny I no longer find canola oil to be ‘smelly.’ And I don’t know why. Maybe, for me, it’s psychological. I’m a big fan of Andrea Nguyen and she highly recommends canola oil.

I know that we all have people that we follow. All the food channels were touting canola oil in the '80s and '90s, I never did like it. And I love sardines and mackerel- but wanted a more neutral oil. Totally neutral. Canola isn’t it.

Whereas I find it far, far more neutral than oo.

True, but I like the flavor of olive oil. For neutral I like grapeseed or avocado oil (my current fad favorites)

My personal preference puts olive oil firmly in third position behind butter and animal fats… but this sounds pretty interesting!

It depends. Wahine came home with some exra virgin Canola. EVCO? Not a good thing!

2 eggs left in the fridge. Will have to try this tomorrow

Last time we were on Kauai – I guess that had to be seven or eight years now – I went nuts for macadamia oil and brought home a bottle, then found it unobtainable here on the mainland. Looked up online and it would be almost cheaper just to go back myself! But as that’s something I only just now remembered, maybe I should look it up again. I seem to remember it came in various versions, including a spicy one I liked … OTOH, grapeseed is very good, pretty cheap, and as close as Trader Joe’s.

Okay, then, here’s another thing, speaking of spice: my daughter-in-law in Nashville likes shopping the Latino markets there as I do in SoCal, but lots of Latino etc. grocery items there are east-of-Rockies only, and as likely to be Cuban or Caribbean as Mexican. Anyway, she sent me a seasoning called Tajin, basically ground chiles and dehydrated lime juice, that makes my eggs pretty perky. It’s a different sort of pizazz than smoked paprika gives, but lots of fun if you don’t overdo it

If you’re near a trader joe’s they have a chili lime seasoning that’s basically the same as tajin if that’s easier for you to find. There are street vendors here in nyc that sell fresh mangos cut in chunks and sprinkled with the tajin, it’s a popular snack