American Test Kitchen released their “Best Chef’s Knife Under $75”. For 30 years, ATK has been recommending Victorinox for inexpensive knife. This year is no different. However, ATK has also recommended Mercer Renaissance as a close second. 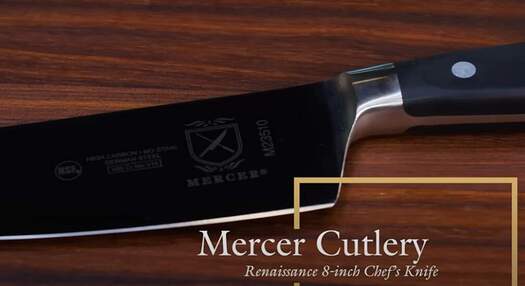 My thought is that ATK follows the mass market slavishly. This explains most everything they do and say.

The open question is whether it’s laziness or some form of payola.

You mean Victorinox and Mercer have large sale volume and already popular?

Yes, the exception being Mercer is merely newly popular, much like MadeIn and all the mattress companies.

As someone who really prefers a full bolster I am unhappy with the handles of both of their picks, but if I was forced to choose it would be their 2nd one.

For me, another question, in addition to the lazy and payola one is whether there is something to the recommendation.

I read all the knife stuff, especially the ones about sharpening, but would still like to know if there is a knife I might like that I don’t have to be afraid of sharpening “wrong”.

And thank all of you who have reassured me about my knife sharpening fears.

Softer knives are easier to sharpen (Zwilling-Henckels, etc.). Harder models (carbon steel) not so much, but many hold an edge longer. If you hone regularly at the right angle, you can significantly reduce how often you need to sharpen knives.

But eventually they all need to be sharpened. Stones are best for this, as the typical “pull through” sharpeners remove a lot of metal, and are less than ideal. Bare stones require some skill, but there are a number a number of devices out there that set up/maintain the angle for you so those skills don’t need to be developed.

Note the EdgePro stuff is pricey, but there are clones on eBay for way less that yield similar results.

I have 2 sizes of the Misen knifes. A 6 inch utility knife, plus a 4 inch paring. Do they cut well . Yes . Professional maybe not . I keep them in the box after hand washing. Not as hefty as my Henckels. I agree America’s Test Kitchen will say what it needs to.

I sharpen my knives on a flat sharpening stone. The stone has a course and fine side.
As a boy, my father taught me how to sharpen a knife and I never knew there was a wrong way. I was just careful to maintain a smooth stroke as I glided the blade down the stone and watched that I had the proper angle. The end result has always been nice and sharp, ready to go back to work.
I never really paid that much attention to the manufacturer, I just checked and my favorite all around knife says “Basics” & “Made in China” on it. I never knew… I’ve just kept it sharp and used it (happily).

I think the best recommendation I can give is start sharpening an inexpensive knife.
There are certainly right ways and wrong ways to sharpen a knife. However, almost always, any mistake can be recovered/fixed.

Are these knives available in other countries as well?

Yeah. These knives do have a wide international market.

My perception is that ATK is not payola driven, but definitely mass market driven. I think their core audience is the average home kitchen cook with light to medium experience in cooking, and likely are just starting to explore foods beyond the meals they grew up with. Their recipes tend towards ingredients available at the local supermarket chain, and not at niche or ethnic markets. They often add those notes for substitutions you if you can’t find authentic xx, which is helpful for some cooks.

On their recommendations for foods or equipment, I like the insight they provide, even if I don’t always agree with them. But again, I think they tend to steer towards products you can easily find in a national kitchen store chain or off a big retailer, online and b&m. It’s rare for me to see them try to review more than 6-8 pieces of equipment of a certain category.

My first inexpensive kitchen knife was actually a $20 knife from TJ Max. I used ones like that for the first 5-8 yrs of home cooking and didn’t splurge on a better knife until later. You can still find good deals when you look at the sales section of the manufacturer’s websites.

I used to enjoy ATK and Cook’s Illustrated, but their reviews rarely included the outlier, non-mainstream options, despite the fact that such options were often excellent choices. Their review criteria are biased towards features that average home cooks seem to find important, such as ease of cleaning, comfort, and durability approaching a par with conductivity and responsiveness… i think it is human nature to read such reviews to find validation, and if you are a cookware geek, you will quickly drop following them because they are unlikely to be validating your choices. As we all know, the best validation is how a piece performs for you in your kitchen with your food!

You’d think OXO has a financial stake in the show/enterprise as much as they seem to prefer their products.

In general I like OXO products but can almost always find a lower cost option that performs as well or better. Their can opener can be a challenge at times.

I like ATL reviews a lot and really appreciate that they do them. I consider the possibility that they are paid to support certain brands is akin to a conspiracy theory.

However they have an enormous bias which many have pointed out, which is to evaluate only mass produced commonly available brands.

Their can opener can be a challenge at times.

I agree, but have found that after you make the cut, lifting the lid off by hand is where the problem lies; it’s usually impossible. You have to use the pincer-like part to lift off the lid.

I used to enjoy ATK and Cook’s Illustrated, but their reviews rarely included the outlier, non-mainstream options, despite the fact that such options were often excellent choices.

Right. But that’s the point. The outlier and non-mainstream choice may not be available at the local walmart/target/costco which is, let’s face it, where most of ATK’s white ‘aspiring middle class’ audience shops. They’re unlikely to search out the local restaurant supply house. They strive to give you the best choice possible of those most likely available to most viewers. There’s value in that.

I’m ALSO pleased to see a growing diversity in their on-camera talent. They recently posted a recipe for dan dan noodles that INCLUDED pickled mustard greens, telling viewers that it’s worth it to seek out an Asian market near them, or even resort to the internet. And that’s a big step from where they were 20 years ago when they would aggressively white-wash any sort of exotic ingredient you couldn’t find at a the local Stop n Shop. “This calls for thai fish sauce, but if you don’t have it, soy sauce will be fine.”

The outlier and non-mainstream choice may not be available at the local walmart/target/costco which is, let’s face it, where most of ATK’s white ‘aspiring middle class’ audience shops.

I submit that this aspirational cohort shops mostly online, and that if Small Brand X got a top review from these clowns, the market would sort it out in favor of SBX. ATK is actually an active barrier to cream rising.