We have an interesting fried rice thread here.

Fried rice! What are your favorite ingredients and techniques? Cooking, Cookbooks, Ingredients

What about fried rice? Should I start a new thread? There was a GREAT one on CH. Hope this is okay; tips for getting started with fried rice snax | Nov 26, 200901:59 AM Saving this here, as it’s one I’ve been wanting to try. ccj Dec '18 A dish I was introduced to in Toronto is Cantonese Fried Rice with salt Fish. It is really good, and one does not have to bother with soaking the fish in water Salted fish can be found in Asian storeat a premium price but a little goes a long way and they …

Talking about MSG, some soy sauce does contain that, check ingredients carefully.

Well… you mean additional msg? Glutamates are found in a plentiful amount in soy sauce anyways due to the hydrolyzed breakdown of soy bean products in fermentation. Add salt to that process of making soy sauce and voila mono sodium glutamate.

In any case, just bought a bottle of Kowloon Soy Sauce back from HK. Curious how that’ll taste. But I usually go with Lee Kum Kee’s soy sauce for tastes

Thanks for the info, I find it very interesting. In case it wasn’t clear in my post, I meant that we don’t use ss in the cooking process at our house for fried rice. BUT, we will often drizzle it on top if we feel like it needs more salt.

I think we may need a new thread for MSG!

I remember seeing MSG in bottles, but forgot which one, maybe a Taiwanese brand. Don’t know if they still do it.

I agreed with you, when soy sauce is made with premium beans and with fermentation, should be with the natural glutamates. Unfortunately, many used colourings. Also many aren’t gluten free, wheat starch is used.

I think we may need a new thread for MSG!

As far as I remember, we have these MSG threads:

What does MSG taste like, and what else makes me thirsty besides MSG and salt? Cooking, Cookbooks, Ingredients

I had two meals last week that afterwards I had to drink copious amount of water for a few hours to quench the thirst. I would be surprised if one of the restaurants use additional MSG. But since the food didn’t feel overly salty at the time, the only reason I can think of for the thirst is MSG. I really don’t like meals that I have to be thirsty afterwards for the whole afternoon or whole evening. So two questions: In order for me to limit my consumption of MSG, I want to get a better sens…

The New Yorker: An MSG Convert Visits the High Church of Umami Food Media and News

excerpt: A few years ago, this affinity for MSG might have made me seem edgy or cool. Monosodium glutamate has been widespread in the American food supply since at least the nineteen-twenties, imported from China and Japan by major food-production companies like Heinz and Campbell’s, according to research done by Catherine Piccoli, a curator at New York’s Museum of Food and Drink. But a 1968 letter published in The New England Journal of Medicine raised the spectre of “Chinese Restaurant Syn…

A new thread if you have a new perspective.

I remember seeing MSG in bottles, but forgot which one

I remember as such. Some of the Lee Kum Kee soy sauces have MSG. Others do not have MSG per se, but have other chemical flavors, like disodium 5’-guanylate. Then, others have none… 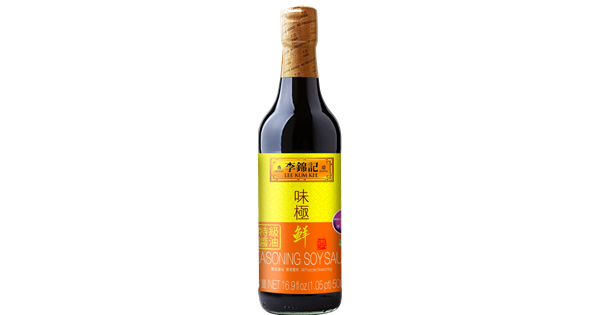 Made from high quality soybeans. It is naturally fermented which results in a rich soy flavor and aroma. This is an ideal sauce for marinating, dipping or stir-frying which enhances the taste and appearance of all kinds of dishes.

Coloring is very common for the so called dark soy sauce. Usually, it is with caramel. It is pretty much a requirement for the darker coloring. As for wheat, that is a very common practice with Chinese style soy sauce. Luckily, there are still soy sauce without flavor enhancers like MSG and without preservatives.

As mentioned, Koon Chun soy sauce has a simpler ingredient list without additives: water, soybeans, salt and flour (no flavoring additives nor preservatives) 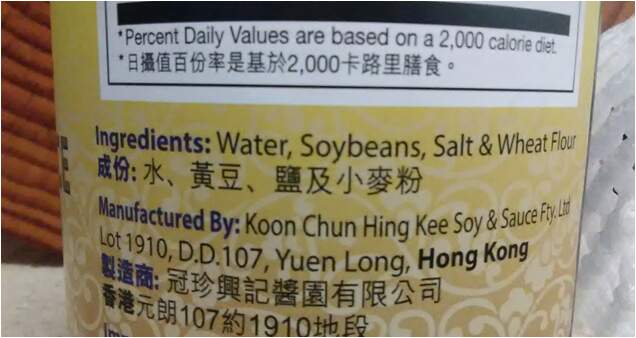 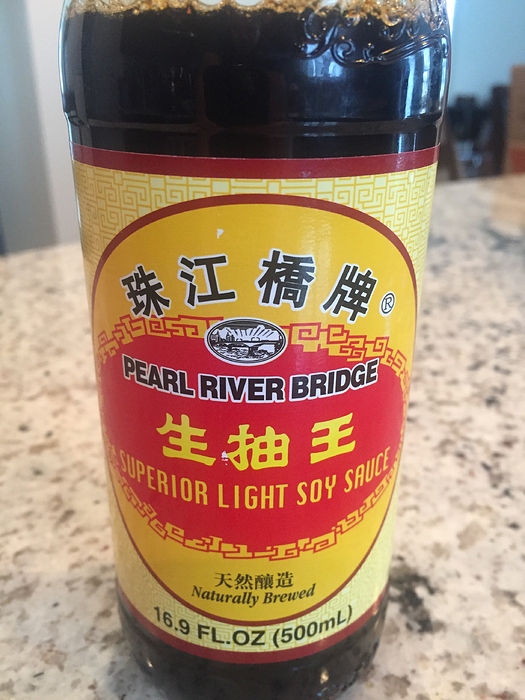 I thought the brown fried rice of my childhood got that color from some kind of browning agent, like gravy master. I used to keep some specifically?!y for that! I have no idea where I read that.

It is true, fried rice in Asia is not brown - but in the US the “dark soy sauce”, which has a slight molasses flavor, can be used to quickly give dishes the “brown” color without having to add lots of soy sauce.

The light soy sauce I use doesn’t color dishes nearly as much as even Kikkoman does.

I’m a sucker for anything made in Japan, but the Trader Joe’s soy sauce from Japan is no good. It took me a long time to accept that.

I started with Pearl River, then moved to Kimlan. Then, my local HMart and Great Wall were out of both for a few weeks, so I sampled far too many other brands and eventually settled on Koon Chun as my new favorite. It’s made in Hong Kong.

a small bottle near my stove at room temperature, the main bottle stays in refrigerator to preserve its flavor

I do this, too! And I really think it makes a difference. The Koon Chun bottles would often leak for me, so I actually transfer all of it to another bottle first. I use mostly the “thin” variety.

I’ve given up trying to convince people fried rice should not be brown. I’ll take some out for myself (and immediate family) and “brown” the rest. If I’m out of soy sauce, I’ll add tamarind and people tend to enjoy that a lot (we are Pakistani so tamarind is a familiar flavor.) I agree the dark soy sauces are better for coloring, but I wasn’t using them for much else, so I only keep the thin soy sauce now.

Kimlan is good too. (Well, soy sauce is kind of a personal thing, so everyone has their favorite). The only thing is that I think some of Kimlan soy sauce has sugar. I have nothing against sugar. It is just that I rather have the ability to adjust sugar for my dishes. A minor thing really.
Yeah, same here for me, I don’t use dark soy sauce very often – only maybe a few dishes here and there. I am talking about less than 2-4 tablespoon in a year…

Tamarind is nice, but I don’t use it often. I think the last time I use it for was for Pad Thai noodle…Tamarind fried rice will be yellow, right? Not brown. What about turmeric?

I don’t think that’s just soy sauce that gives the Chinese-American fried rice it’s super dark coloring. My dad used to work in one of those places and they added additional sauce that made it that color. My parents made fried rice with soy sauce, and they both lived in HK and cooked that style of food for many years, yet our fried rice came out looking like your picture above. That’s how I make mine too, and it doesn’t look darkened.

Somewhere I was told it was Gravy Master in old school (Queen’s?) NYC “Chinese Fried Rice”.

Who remembers “Egg foo yung”? Pretty sure THAT’S an interesting story. I LOVED the ribs. I can finally afford them, and they are not to be found anywhere around here. i can make do with the chopped ones.

I agree. It takes the dark soy sauce to give that darker stir fried Hor Fun color – thin soy sauce will have a tough time yielding a dark brown. 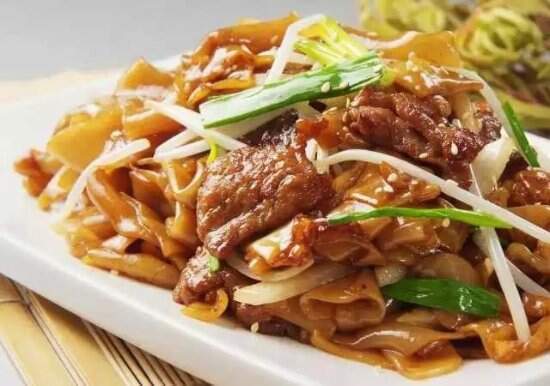 Conversely, regular thin soy sauce will not be enough to give the darker brown color we see in some fried rice.

For disclosure, that is a random photo I found on the internet.

I didn’t make it.

Recipe for fried rice? All my various versions of fried rice are really based on the simple egg fried rice. I do have recipes, but I think they don’t really capture what I aim for.

A couple key points for my fried rice are:
(1) I try not to overwhelm my stove/wok. If I need to stir fry the rice in 2-3 batches, so be it. It is important for me to make the fried rice at hot temperature.
(2) Add oil to the hot wok first, then add beaten egg. When the egg is about 70-80% done (solidified but still soft), then I add the rice
(3) Constantly moving the fried rice in the wok at hot temperature – as hot can I get it to be
(4) I try to aim that my fried rice can freely move in my wok as individual grain. They should not be stuck together at the end. So, I will constantly break the rice grain up if I need to
(5) Also, I try to add enough oil, but I also try to add as little oil I can get away with. This way my end product won’t be as greasy and oily. However, if I don’t add enough oil, then the fried rice won’t have that “fried” flavor. It will have more grill/burn flavor

For chow fun / ho fun, which I love, but have never made at home. Thanks for the fried rice recipe though! Bookmarking it…

I’m going to try to save this in the fried rice thread.