You had me at Korean Fried Chicken... Bulbap Grill Marlboro

Ah, Marlboro and its plethora of restaurants… Italian up the Wazoo, pizza places too, Chinese, Turkish, Indian, Japanese (though most likely not actually owned by Japanese), Szechuan, etc. We’ve got it all… except for Korean. Wouldn’t it be great if we had a Korean restaurant?

Well, we soon will.

There was a Capital One Bank next to ShopRite… they went out, and the place was gutted. Drove by the other day, and there was a huge green wrap across the windows… the text reads as follows:

We really miss Bok Bok chicken when it was at the Freehold Raceway Mall food court… I am really looking forward to chicken again. I hope they have charcoal grills! ***

In other area restaurant related news:

Cucina Naturale in Englishtown - Out of Business

There is supposedly going to be a Burger King built on Rt. 9 South, north of 520 (of course, close proximity to McDonalds!)

The strip mall opposite Costco (where IHOP is) has been undergoing extensive renovations. Possible tenants I heard about were Red Robin Burgers, a Costco Liquor Store, and another chain I can’t remember.

And it’s… Korean Fusion… probably because an authentic Korean restaurant in this area wouldn’t fare well.

Sorry to hear that Cucina Naturale is out. I frequented there in their first couple of years with mixed results, but always enjoyed the pizza with the shredded potato. Had not been back in quite some time. They seem to have had a decent run for a place that was mostly empty on my visits.

@marlboroman I love your local updates.

Finally, a Korean place (or at least a quasi-Korean)
Went to facebook and the decor reminded me of Boom Boom Chicken next to Hmart in Edison. So I hate to disappoint you, but I don’t think there will be charcoal grills.

Anyhow, a fast casual KFC would be a lovely addition to our area.

I am not ashamed to admit I’ve enjoyed Boom Boom Chicken and Bok Bok Chicken, so bring on Bulbap Grill. Plus this is pretty close to me so even better. Good to hear from you @marlboroman

I’ve been anxiously waiting for this place to open but 3 months later and still paper on the windows saying coming this spring and no sign of opening. Their place in Brooklyn opened in April. In mid May they said on their Facebook page they hoped to open in Marlboro by late June. 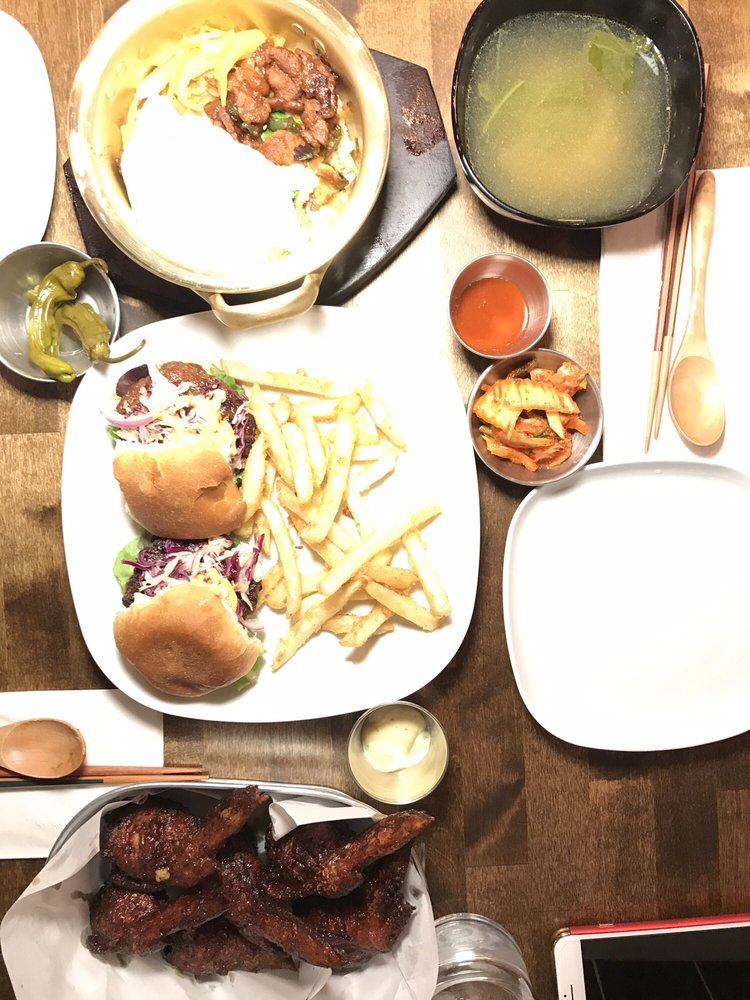 Specialties: Korean BBQ and Rice Bowls at its best! Established in 2017. Established May 2017 and going strong!

I was just there a few days ago. They had the front door propped open briefly, so I looked in. “Coming This Spring” is probably once again accurate, if they mean spring of 2018. It still has that lumberyard smell, and all I saw going on inside was basic construction. (The fact that the door was open indicates some progress is being made.)

that sucks… i was hoping they would open soon.

There’s a sign in the window says ‘Now Hiring’. From what I can see peering in they look 2-4 weeks from opening. Somebody spent some money on the build out.

Sign in the window says ‘We’re Open’. Seems like just 3 weeks ago I posted about this place.

Just spoke to them on the phone. They said they are not doing delivery yet and when they do they are thinking only within 5 miles. Oh well, that puts me outside their radius. I wonder if the kitchen is up to speed.

Also, their location comes up wrong in google maps if you click the link on their website. They are definitely on the corner of 520 and 79 and not on 9.

I have no idea why you think this. Unless they have picked up the restaurant that I actually saw and moved it, they are on Route 9 and Union Hill Road in the Shop-Rite plaza in Marlboro.

Well, that’s much worse. Darn, I guess I was so excited to have a Korean place in my backyard I thought they were going into the empty spot in the other strip mall. Tyvm for the correction ( and ruining my Asian food fantasy ).

So, the lure of KFC had me stopping to get take out on my way home yesterday. I got 6 hot wings and six soy garlic ones. I also got a 4 taco assortment.

First off this is not a fine dining restaurant, more like a Jimmy Johns in layout. I couldn’t care less as long as the food’s good, but, for instance, it might be hard to do a HoDown with more than six people there. Second, it seems like one hand doesn’t know what the other is doing. The menu on their website shows a 4 taco for $15 deal, which is why I ordered four, but they charged me by the piece instead and I paid a few dollars more. Also online is the tacos, all preset with certain meats and toppings. The in store paper menu told me I could have made a bunch of different choices from the type of tortilla to my choice of toppings.

The food was good to very good. The wings, especially the Korean Hot Wings were better than those at Mogo in AP, and the tacos were on par with them. Even sitting in the take out container for a while, the food was still very good and that says a lot, especially with wings. Looks like Bulbap Grill is on my list of fairly nearby take out joints now.

Second, it seems like one hand doesn’t know what the other is doing. The menu on their website shows a 4 taco for $15 deal, which is why I ordered four, but they charged me by the piece instead and I paid a few dollars more. Also online is the tacos, all preset with certain meats and toppings. The in store paper menu told me I could have made a bunch of different choices from the type of tortilla to my choice of toppings.

I wonder if this is because the pricing et al is different in Marlboro from their original Brooklyn store.

It sounds good but we may wait a couple of weeks until they sort themselves out. (It’s difficult to judge a restaurant that’s just opened.)

Well - we went for lunch today. About 1 or so… wasn’t crowded but it was busy. A few people dining in - quite a bit of takeout. For the record, the manager (owner?) told me they are ‘thinking about’ delivery.

It was a cold & blustery day & I was in the mood for something spicy so I had the spicy chicken rice bowl. Jul had the vegetarian rice bowl with egg, seaweed & avocado. They were both good to very good. The chicken was spicy enough to make my eyes sweat. Jul’s thing was tasty also although not spicy. Lots of flavor. Both came with a little cup of kimchee which was also good. We both liked it and I bet we’ll go there again.

Next time - they have a bunch of sort of ala-carte things which I’m going to have.

Pricing is reasonable for what you get. A buck a wing kills me though. I just can’t do it.

A buck a wing kills me though.

Especially since it’s probably a buck a half wing, or $2 a wing.