While I had watched a few seasons of the food competition TV series, “Top Chef,” I missed the season where Chef Stephanie Izard ended up winning it all. Chef Izard is the chef-owner of Girl & The Goat in Chicago, which opened in 2011, and somehow during a pandemic, she and her team have managed to expand to a 2nd branch here in Los Angeles. 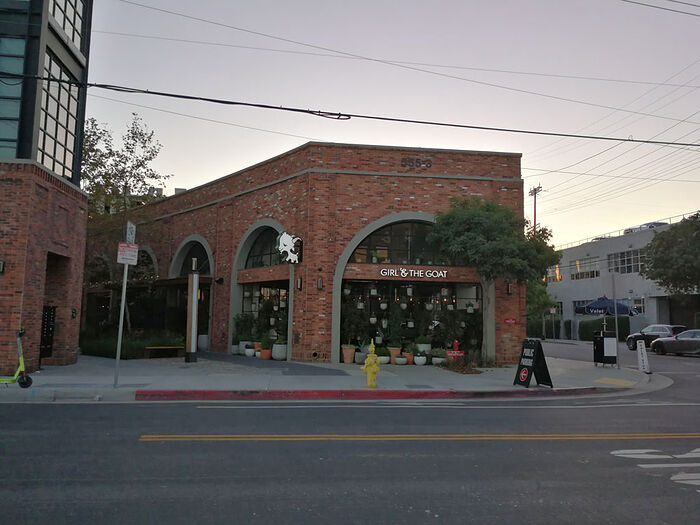 Just a block away from the wonderful Bavel, this new Girl & The Goat (Los Angeles) is a brand-new build out, and it’s a beautiful space with clean lines, plenty of potted plants and greenery, and a bright, welcoming open bar and open kitchen. 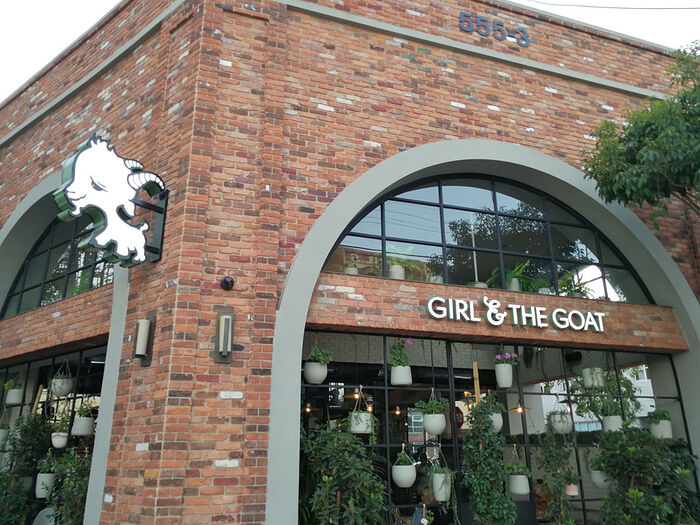 We purposely didn’t research anything about the restaurant and just wanted to show up and enjoy the menu as is. There’s a cute, rustic, inviting aesthetic from the moment you walk in, in the table settings, menu and dishes. 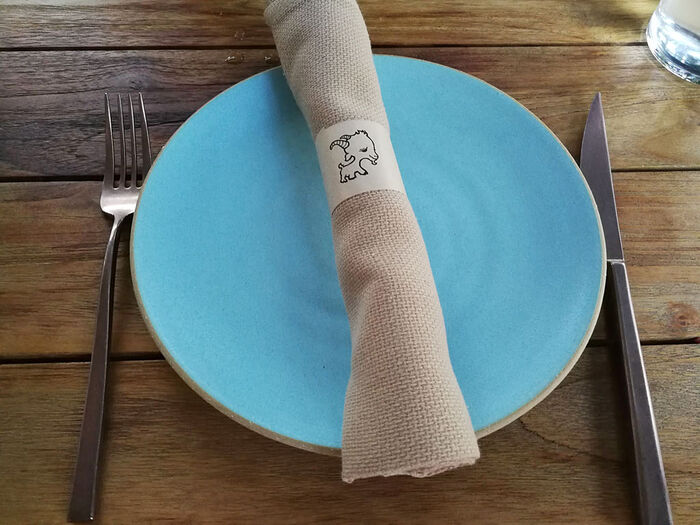 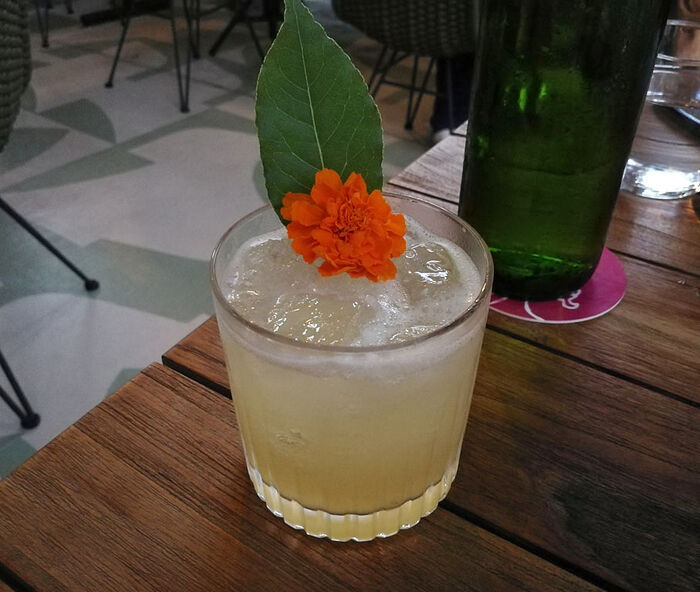 This was a solid version of the Bee’s Knees Cocktail. Not too boozy, floral, honey sweet, but I wish there was more Galangal flavor coming through (which in and of itself is unique here, so that’s nice).

Looking over the menu, and it’s a surprising array of dishes that seemingly are influenced by a bunch of different cuisines. There are influences from England, Mexico, Korea, China, Japan, India and more. 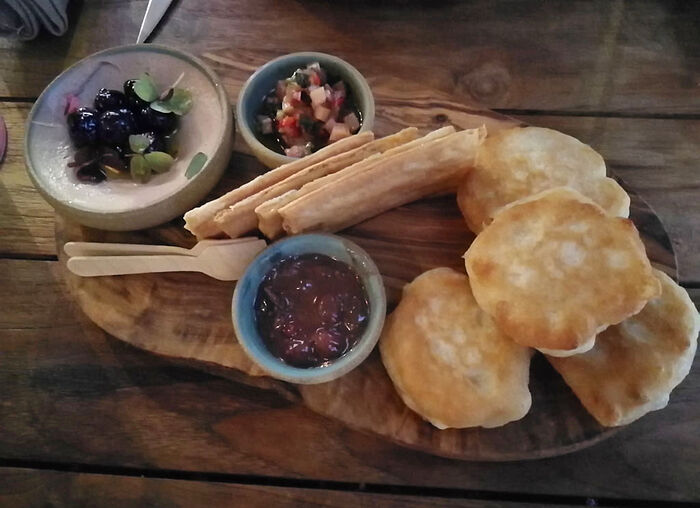 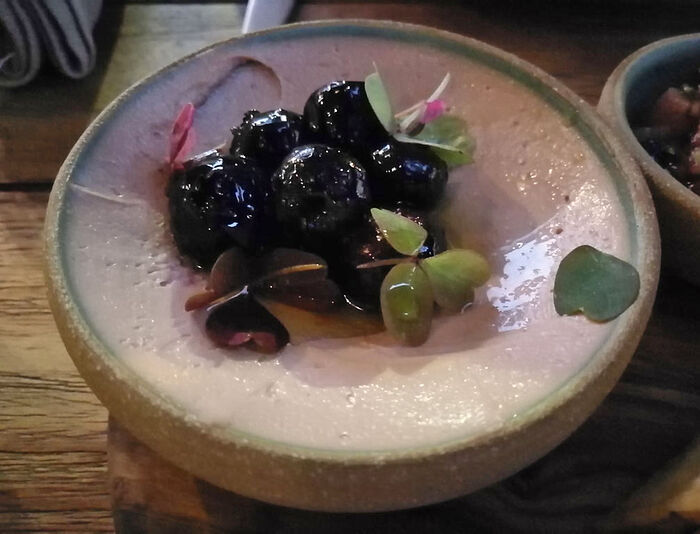 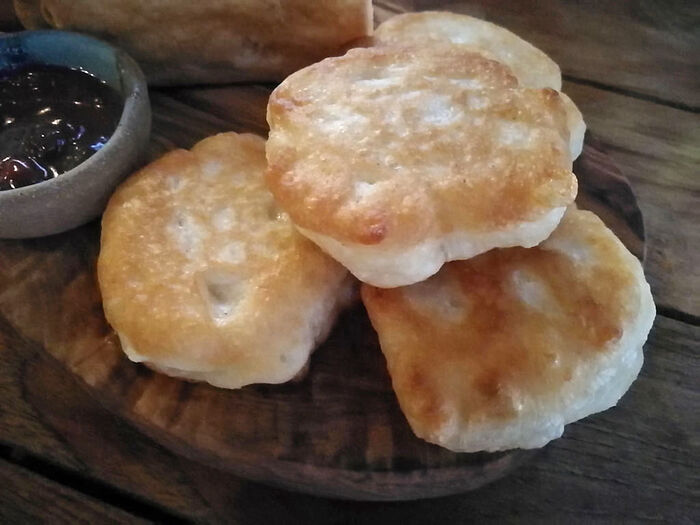 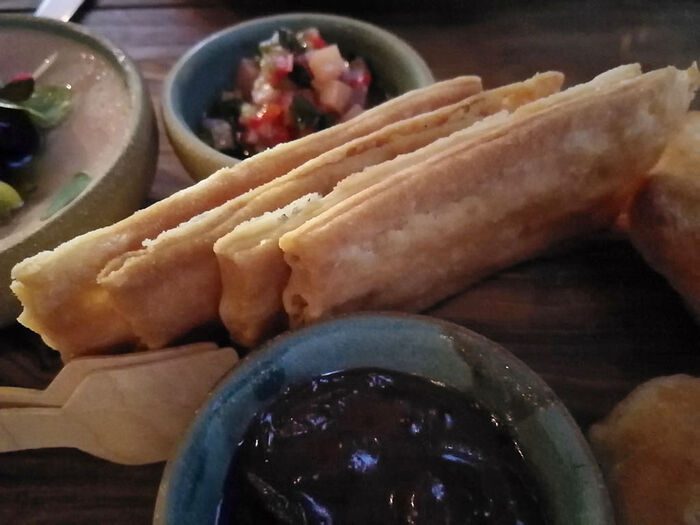 This appetizer dish sets the tone for the entire restaurant: First, Goat Liver Mousse. With a name like “Girl & The Goat” I suppose it’s to be expected, but certainly Goat Liver Mousse is a rare sighting even in an international city like Los Angeles.

Second, Crumpets! I don’t remember any local restaurant that had freshly made Crumpets, let alone to pair with Goat Liver Mousse(!).

But the most important thing is that it works.

The Goat Liver Mousse is not overly iron-y like some Liver dishes might turn out. It’s smooth, creamy, a touch of gaminess, but generally very approachable and delicious! But it’s the Housemade English Crumpets that are the star of the dish: They arrive fresh off the griddle, piping hot, fluffy, buttery, flaky, absurdly addictive!

The Housemade Biscuit Crackers are also outstanding, but the Crumpets take the cake. This is a standout dish, and one of the best in L.A. that we’ve had this past year+! A must order. 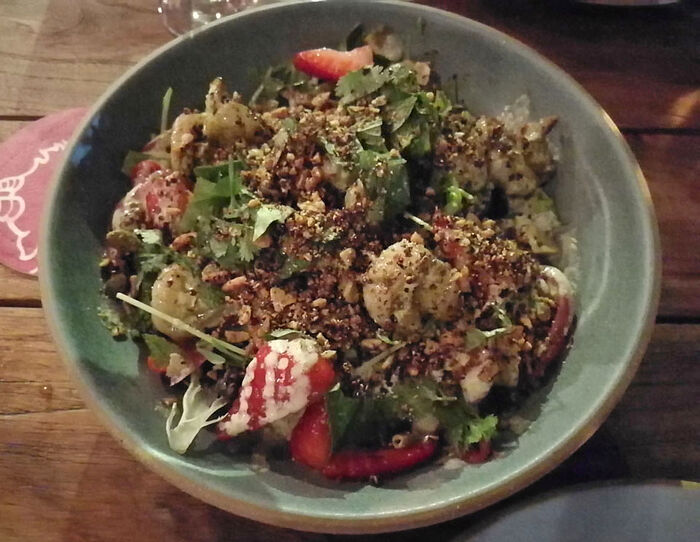 On paper, this sounds like a hodgepodge of random ingredients thrown together, but it works beautifully: The Shrimp are plump and have a bit of natural brininess, but they are not the star of this dish. Instead, it’s really the variety of ingredients coming together, the very fresh, vibrant, local Farmers Market Greens, the last of the season local Strawberries (this 1st visit was a couple months ago at the tail end of the season), ripe California Avocados, so creamy and rich, the brilliant use of Pepita (Pumpkin Seeds) adding a nutty, aromatic crunch. And their Housemade Lime-Herb Dressing was interesting without overpowering.

It’s just another example of what made Chef Stephanie Izard standout, and I can see how her Chicago original restaurant has a loyal following. 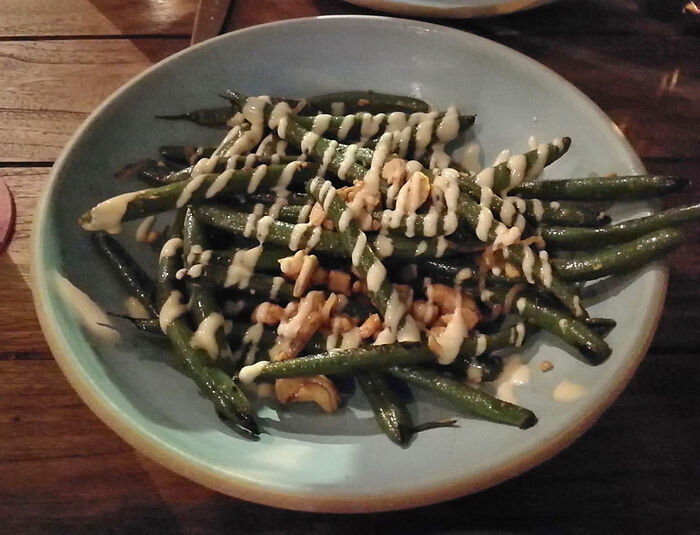 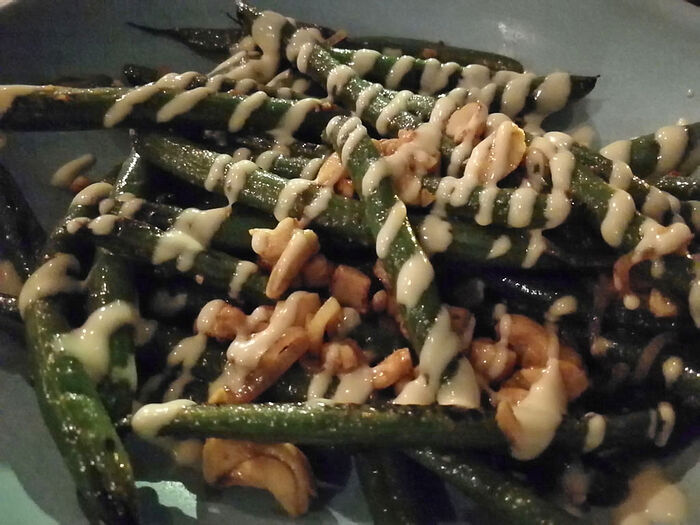 Apparently, her Sauteed Green Beans are a famous “must order” dish at her Chicago original Girl & The Goat. Taking a bite:

It’s quite tasty, but it’s also very familiar for us living in Los Angeles, home to one of the largest populations of Vietnamese and Chinese Americans in the U.S. So while it may be foreign and “new” and “exciting” to those that had never had Vietnamese or Chinese cuisine, here in Southern California, the influence and authentic mom & pop shops exist all over the region. So Chef Izard’s Green Beans are quite familiar, but not in a bad way:

It reminded us of the Szechuan Dry-Fried Green Beans with some Vietnamese influence as well. Again, not bad, and quite tasty, so we’d be glad to order it again, but it’s not as revelatory as someone who hadn’t had it before.

(Apologies for the poor pictures - it was very low lighting at our table.) 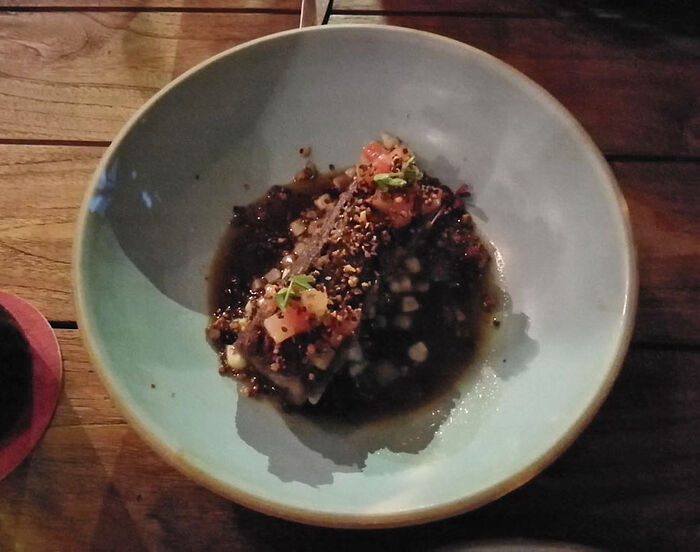 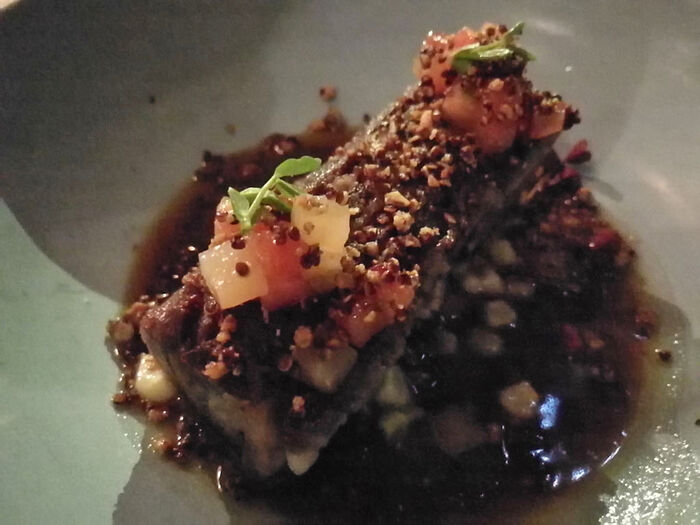 Similar to the earlier Goat Liver Mousse, it’s not often you see Confit Goat Belly(!) on a menu locally. And it was another spectacular dish, and again showing off promise of Chef Izard and her team: Taking classic French techniques like Confit and applying it to Goat Belly. The spicing and marination reminded us of Indian cuisine, and the Goat Belly was fork tender, melting and luscious.

The one issue we had was that at $27 (+ tax & tip), it felt a touch precious: It was a small slab of Goat Belly (not that you’d want too much more - it’s very rich and decadent), but there were no accompaniments with it (see next dish). It just felt like it needed something else with it. 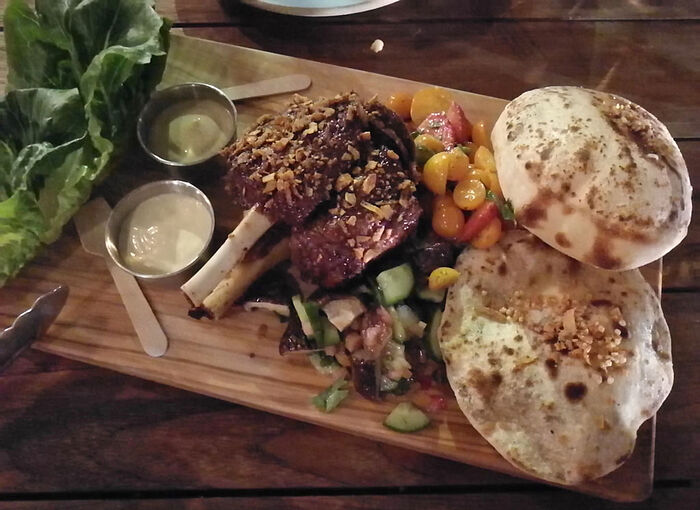 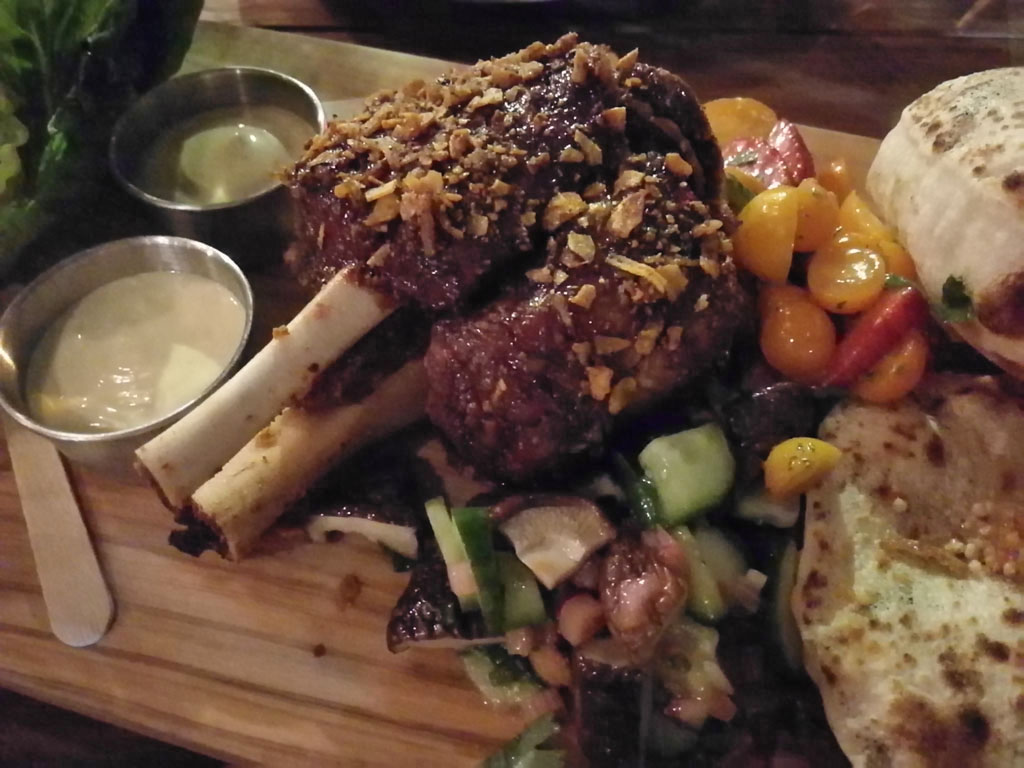 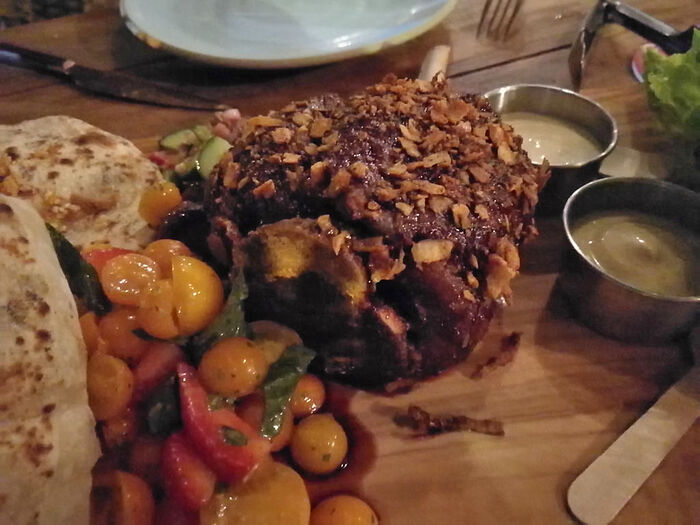 I don’t remember the last time I had a bone-in Pork Shank where you tore off a bite of the meat and built your own Naan “Pita” in the process. Chef Izard’s Sticky Glazed Pork Shank was another noteworthy item on the menu, where the Bone-In Pork Shank is presented with mini-tongs for you to tear off portions of the Pork Shank and freshly made in-house Naan Bread to construct a bite to your liking.

It’s interactive, engaging and the flavors are relatively balanced. I would say that the Hoisin Glazed Pork Shank feels like it relies a bit too much on the Hoisin Sauce, and it dominates each bite.

The fresh Tomato Herb Salad, the Horseradish Mayo helped to cut the fattiness, and the Spicy Gochujang Mustard was a fun mixture that helped add a different flavor as well. The freshly made Naan Bread (warm-hot, puffy) was very good as well, and really elevated the dish. 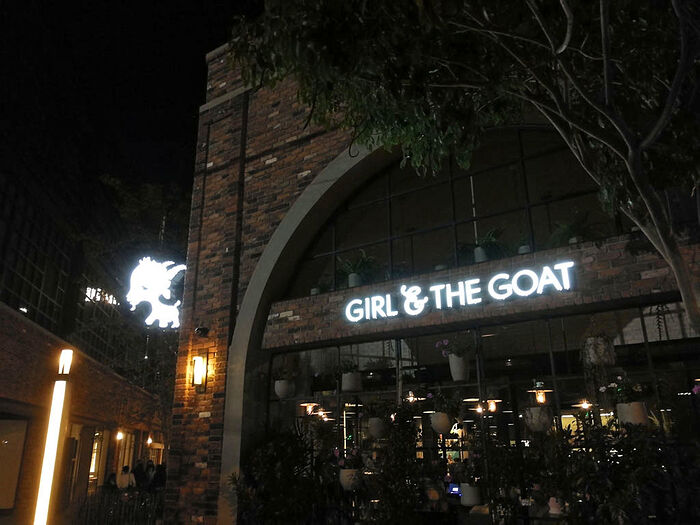 During our 1st visit, Chef Izard was in the house, expediting and tasting dishes, and her oversight was probably a key factor in how enjoyable our 1st dinner was. On this 2nd visit, we found out Chef Izard was back in Chicago, but we were hopeful the kitchen would be fine without her. 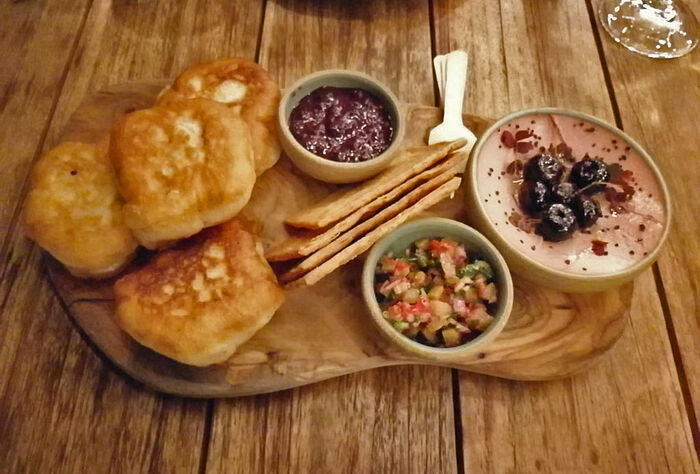 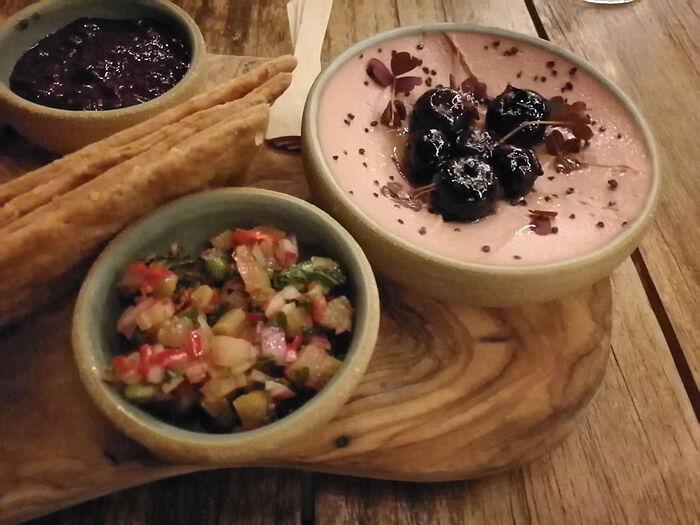 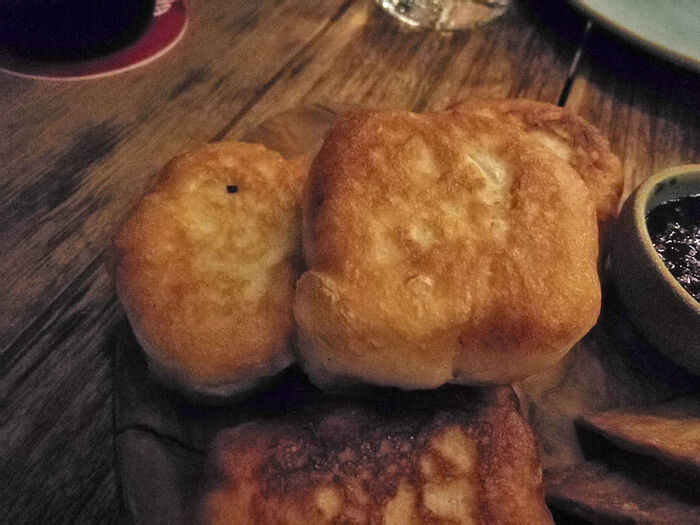 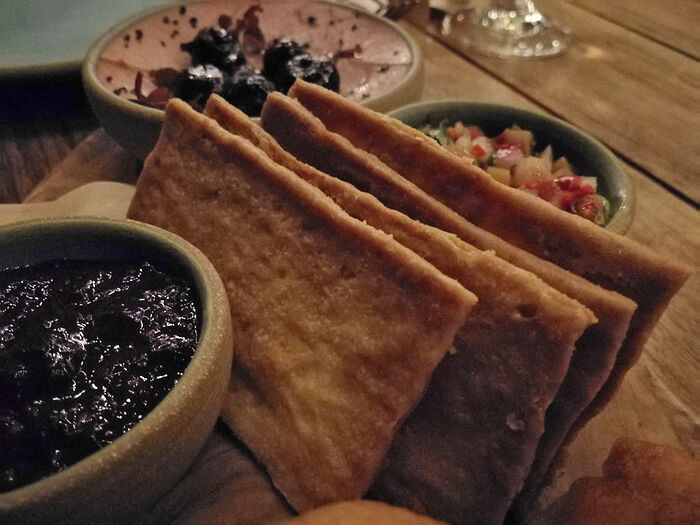 On this 2nd visit, the amazing Goat Liver Mousse was replaced with a Pork Liver Mousse, but thankfully it was as excellent as before.

The best dish of the night. 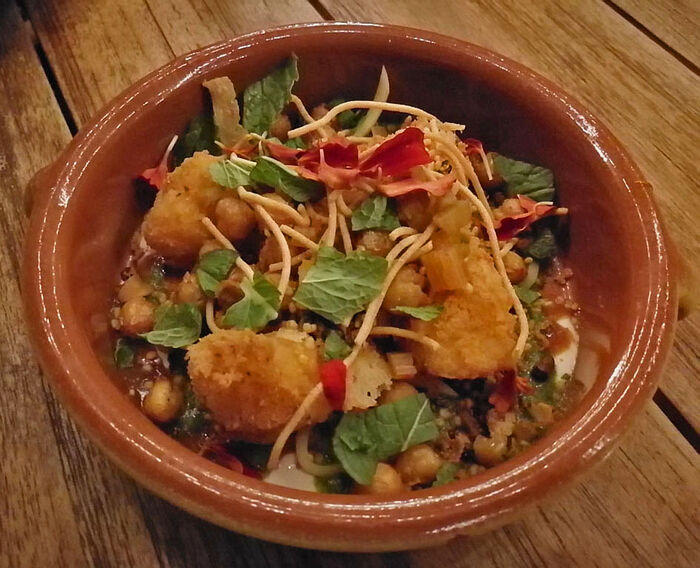 This was quite interesting and unique: Fried Chickpeas in Chickpea Flour, Mint Chutney, Goat Yogurt and Tamarind coalesced into a tasty bite. The Indian influences were apparent, but not overdone. But at the same time, it tasted like something Mediterranean as well. 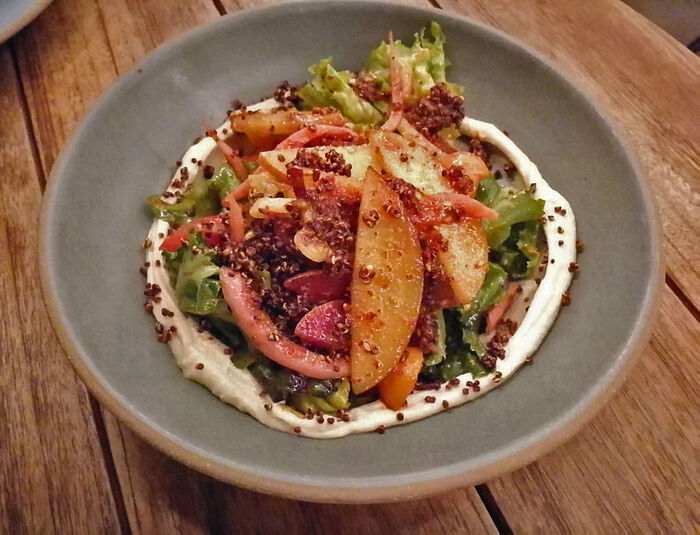 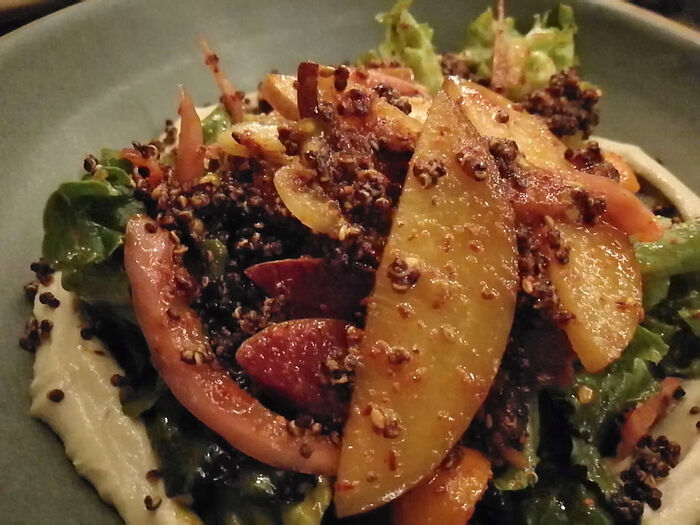 This was very good. Sweet, earthy from the Tahini, spicy, crunchy from the Fried Quinoa, the Tomatoes were the last of the season and beautiful (from local California farms), the Stone Fruit was ripe, sweet, aromatic. 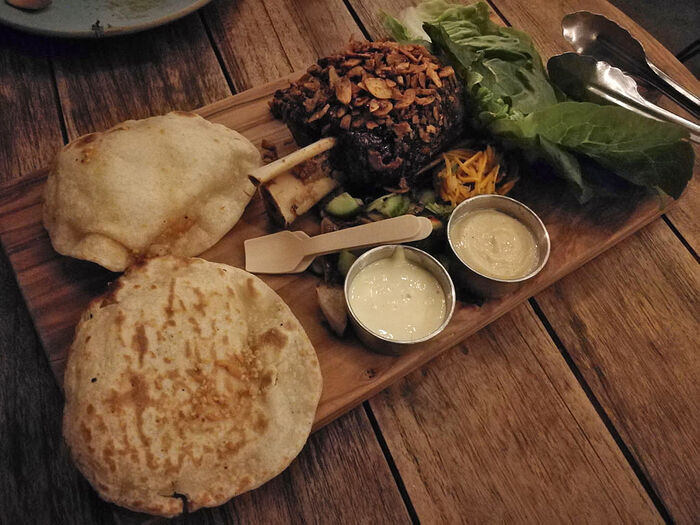 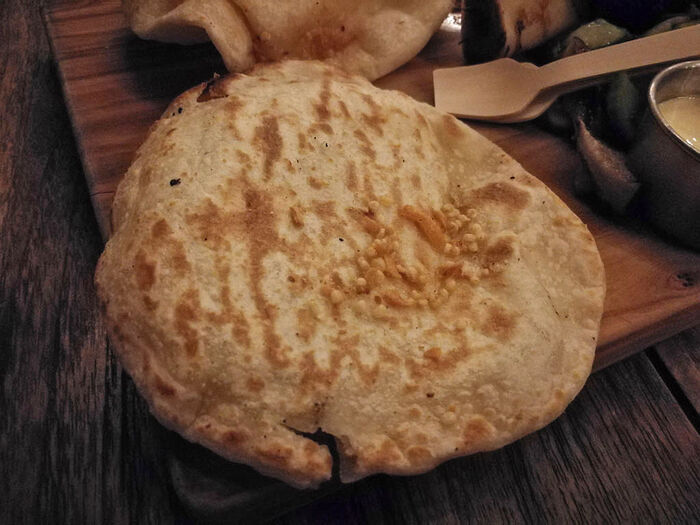 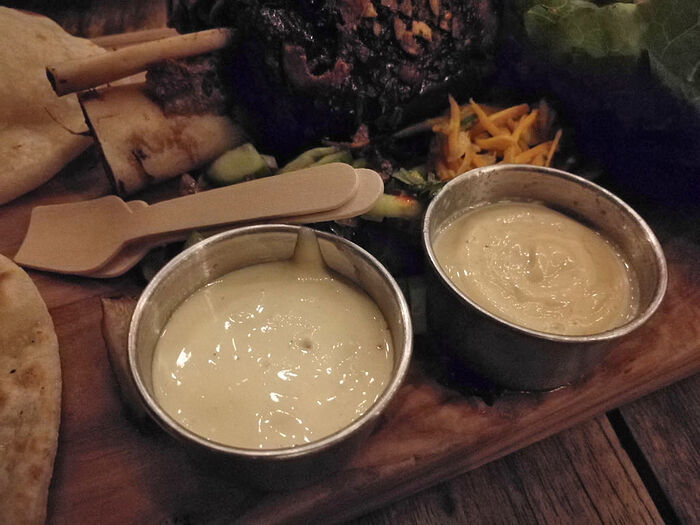 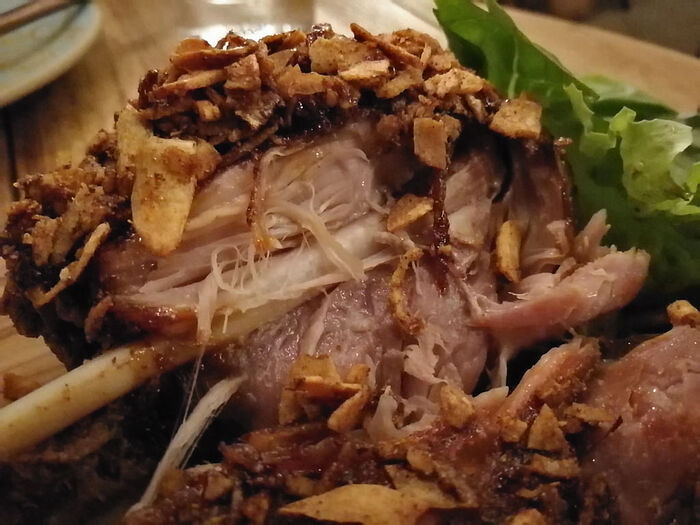 This was a standout from last time, and we had a guest who hadn’t tried it before. On this 2nd visit, the Sticky Glazed Pork Shank was a touch more overseasoned. The Hoisin Sauce was even more heavy-handed, and the Naan Bread was cold.

Definitely a step back compared to our 1st visit.

Overall, this new branch of Girl & The Goat in Los Angeles has the potential to be a local star, but it’s too soon to tell. On our 1st visit, when Chef-Owner Stephanie Izard was in the house, overseeing things, it was one of the more memorable meals we’ve had since the start of the pandemic. It was unique, standout and each dish was on point.

The 2nd visit when Chef Izard was back in Chicago had some standouts, but also some hiccups (the Sticky Pork Shank was chunky, overdone, out of balance, the Naan Bread was cold), pacing issues also plagued our meal (there was a long 25 - 30 minute delay between dishes).

If Girl & The Goat L.A. can ensure their staff cooks as well as when Chef Izard was in the kitchen, then look out for a fun, down-to-earth, approachable restaurant with a “World Influenced” menu, with accents from India, Mexico, England, Korea, Vietnam, China and beyond. If they remain like our 2nd visit, you’ll have potential unrealized, and it’ll fall down to a “trendy, hip restaurant that’s hit or miss” status. We’re hoping they’ll figure things out.

Apparently, her Sauteed Green Beans are a famous “must order” dish at her Chicago original Girl & The Goat. Taking a bite:

It’s quite tasty, but it’s also very familiar for us living in Los Angeles, home to one of the largest populations of Vietnamese and Chinese Americans in the U.S. So while it may be foreign and “new” and “exciting” to those that had never had Vietnamese or Chinese cuisine, here in Southern California, the influence and authentic mom & pop shops exist all over the region.

Chicago also has a vibrant Vietnamese community (at least when I was living there in the late 90’s). My friends would often head to Argyll St in search of a good meal.

I’ve been to G&G twice now (dinner and brunch) and each time I felt like my dining dollars did not go very far, or more precisely, far enough.

Granted they’re different restaurants (cuisines and format), but for less I feel like I can dine better at Bestia down the street.

Thanks for your thoughts. Do you know if Chef Izard was in the house? (Just curious.)

I agree that for the price, it feels like you could get a bit more from it. The 1st visit was definitely better than our 2nd visit.

Thanks for the great reports and pics! I went to the original in Chicago a few years ago and really enjoyed it. I guess their signature “pig face” dish won’t be on the menu in LA, seems that they don’t have a supplier for the pig heads needed.

Good to hear you enjoyed their original branch in Chicago. Besides the “pig face” dish (sounds interesting!)

, what else did you enjoy at their original? Thanks.

The pig face was definitely the highlight, the goat empanadas were quite good as well. I think I also had a version of the chickpea fritters you had.

[Chicago, West Loop] Girl and the Goat US- Midwest

Had dinner at this lively restaurant in the West Loop neighborhood run by Stephanie Izard of Top Chef fame. Mostly small plates, my server recommended 2-3 dishes per person. I was dining solo and they have half portions on some items which was nice, allows you to try more things. chickpea fritter (half portion) harvest chat. masala yogurt. sheep’s feta Pretty good, creamy chickpea puree thats deep fried, tangy yogurt sauce with some bits of I think mango. Outside of the fritters maybe could …

Then again, it might’ve scared some people off (how Broken Spanish used to serve a Half Roasted Lamb’s Head (with skull intact). Definitely a table conversation piece. (Either way, it sounded delicious. Thanks.)

The dishes look like a crapload of ingredients in that first iteration Cal-Asian fusion sort of way you saw back when it first started to become a thing in the 80/90s. But it’s hard to find fault with a restaurant where the prices are so damn reasonable as to almost be revolutionary to LA.