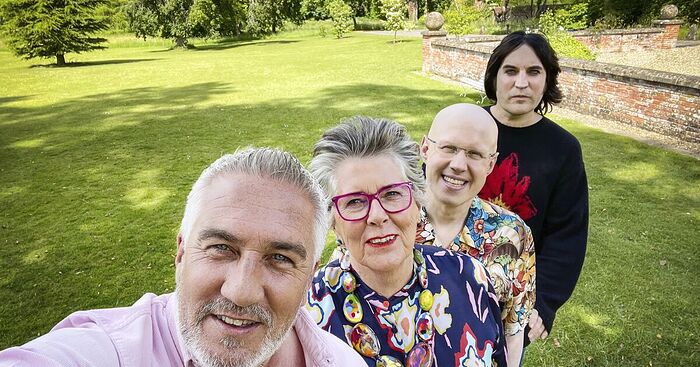 The furor over 'Mexican Week' on the popular reality competition reveals the problems that have come with the series' smashing success.

This sort of criticism happens every time a British cooking show does something about a different nationalities cuisne. It’s happened before with Bake Off and with Masterchef. You’d think the producers really wouldnt be arsed about doing it any more.

It always bugs me when someone pronounces taco as tacko instead of tahco.

I cannot believe I actually read the article from start to finish. Enough is enough with this “Mexican” nonsense.

And I have never heard it pronounced Tacko. Ever.

The pronunciation “tacko” was used repeatedly throughout the episode.

That is how we generally pronounce the word in the UK. I cannot recall anyone ever saying “tahco” .

This episode was so cringeworthy. The stereotypes were out-- and played out in joke that were HACK.
A cultural theme week is acceptable if it leads to greater knowledge and appreciation of the foods available but playing it for exoticism, challenge, or joke diminishes the recognition of what those cultures bring. (Which, as noted in the article, is a strength of the contestant pool of GBBO.)
In this case, the “taco” was a horrible choice, also because it is far from baking, and because there are so many other options in Mexico, which is a large and diverse place. The challenges were lazy (and to insist on multi-level tres leches cakes for a show stopper almost bound to struggle-- better to have put that in the signature challenge).
I was glad to see more Britons protesting this time around (I warned my American friends of the heinousness to come). There’s a problem here in that Mexico is distant, and interactions with Mexicans and the gloriousness of Mexican cuisine are slim at best. As for pronunciations-- the ways people used to offer jalapeños to me in local sandwich shops was a hilarious abomination.

Hunterwali identifies probably the main issue here and that’s the insignificance of Mexico and its food cuisine in the UK. The 2011 census noted that there are less than 9K people of Mexican birth living here - the largest group of which, at 40%, are students.

There isnt even much British interpretation of Tex-Mex food, which is probably most people’s experience, from visiting the chains whilst on holiday in Florida. There is one British Mexican mini- chain, called Wahaca - presumably because the owner doubted, certainly correctly, that there would be very few Britons who would know how to correctly pronounce Oaxaca (me included).

As I said, I really don’t know why the producers bother with these particular episodes. It’s not as though other than a very tiny proportion of the viewing population is going to have the slightest clue about the reality of the dishes. Me included - never eaten Mexican or Tex-Mex food, either in the UK or US. Oh, yes, and I’ve been mocked by family members, whose experience and knowledge extends to having eaten Tex-Mex in chain places in Florida, over my original pronunciation of jalapeno.

Surely they could come up with a different challenge for those weeks.

The show was awful for all the reasons people have mentioned and probably many more.

The ONLY thing that I found interesting about it was the cultural difference between the UK and America … in that almost anywhere in the US people will have had a taco, know what a taco is, and probably have made a taco (granted maybe a horrible taco or from a seasoning packet in the grocery store but …). I was surprised to hear how many contestants had little to no experience with Mexican food in the UK.

This is in sharp contrast to Indian food, where the opposite is more true. You can probably drive through most of the US and people will never had had Indian food or know any of the dishes or spices. I’m looking at you cardamom. But so many contestants in the UK are so versed in Indian flavors and techniques.

Yes I get why that is, etc. I just found it very interesting.

That said - ugh that episode was awful.

ugh that episode was awful.

Have to say, I hadnt read any criticism of the episode until this thread (nor had I found anything to get outraged about when I watched it). Even now, when Googling, there’s very little in the British press. One newspaper reports it is American fans of the show who are “appalled” - perhaps further indicating how little interest there is in Mexican cuisine here. More interesting was the decision to eliminate two bakers last week (to keep them on schedule after not eliminating anyone the previous week).

You need to wait for next year’s series when I’m sure they will feature American food. Or Burger Week as it’s bound to be called

Careers would end if folks wore serapes and sombreros on camera here.

People must not have anything better to do than actively work to be outraged over an episode of a TV show.

I’ve been a big fan for years, but I’m done with the show. Enough is enough. This episode, along with the icky Hollywood handshake and the presence of Matt Lucas, just pushed it over the edge for me. Definitely jumped the shark.

I am aware of that. I was responding to Miss Belle.

In fact, right after I responded to her post, I started to watch The Invention of Lying in which Ricky Gervais also uses the “tacko” pronunciation.

Thinking about British accents, if anyone was going to pronounce it “tahco”, it would be someone from Gervais’ part of England, where folk often pronouce the letter “a” in a long, soft fashion. whereas in much of the rest of the country, it’s a short and hard sound.

As they should. That both comedians are no strangers to black and brown face just adds to the awfulness.

I know, UK and US separated by common language and all but… “baps”?

Comedian John Hodgeman did a show a number of years back, and one segment, he called up a young man to the stage. The young man was British. Hodgeman asked him to say the words “Fast taco.”

the two “a” sounds completely reversed.

And yes, for some people representation matters, especially when for many Black and Brown people and other ethnic minorities, representation that mocks and demeans them is only far too familiar and a standard that one would think is becoming less common. Until something like this happens. In that regard, it’s like saying “You’d think she’d have something better to do with her time than tell people how she was slapped in the face in front of a bunch of people and no-one seemed particularly bothered”.

The stakes of what and how people think about marginalised communities are high, especially in nations where immigration policy is often set up to make their lives miserable.

This is not merely single episode of television, but an indicator of systemic problems. And this particular programme has a very large audience, so yes, it does matter,. If you’re not bothered fine, but this is a perfectly fine thing to do with one’s time even if I’m putting off some work-- but given that I work on media matters, I’m ok with thinking about this, so thanks for the workout.

Ah. You raise the interesting question of regional names for a bread roll. Baps are not far away from me but I live in barm(cake) territory. Cobs are also not far from me but in the opposite direction of baps. However, I think there wuld be a common agreement that a bread roll, used to sandwich a burger, is always a bun.