Why are some panettones expensive and what is appealing about them?

First the disclosure- I have never eaten a panettone. But I see them everywhere in December. I understand that around this time of the year Italians enjoy these as a Christmas sweet. Some industrial-produced store-bought ones are a few dollars each. But I see ‘artisan’ ones everywhere, and they cost like $40, $50 or even more each.

Why are they so expensive? And are they so much better than the cheap ones? The ingredient list for the expensive ones doesn’t seem to contain pricey ingredients.

So I am genuinely perplexed. Please don’t take this question as confrontational. I am just genuinely ignorant about this topic. Thanks.

The cynic in me suggests you have already identified the reason. Put the word “artisan” (American) or “craft” (British) near any foodstuff and it immediately becomes expensive.

I can’t say "alll expensive ones are better but some absolutely are. Some of the artisan ones are more moist, have better tasting dried fruits in them, and in general better ingredients (real butter etc).

Some just charge more because of a fancier tin/etc I’m sure.

I don’t have a go to brand to point you towards but years ago before you could find them everywhere, Williams Sonoma sold one that was absolutely deliacious. I haven’t bought it in years so no idea if it is the same now or not. But having those highlighted the differences between a really good one and a heap mass produced one.

The more expensive ones are imports from Italy right? Like @harters said, they are not mass production, artisan or craft. I have tasted the industrial ones and the famous ones from Italy, the better ones use real ingredient, butter, sometimes with alcohol, fruits confit, or even chocolate. They are similar to brioche, which is a type of bread that requires some work, and the price of brioche to ordinary bread in a bakery here, I would say 3 times more expensive.

But one point is interesting, even if they are from famous specialist from Italy, they can be bought and kept for months. Unlike cakes or pastries from shops, they need to be consumed quickly. I find the difference in quality doesn’t justify the extremely expensive ones. They can charge that price because the place is famous.

Don’t forget panettones are for Christmas and new year. Festival food has another price tag.

A few years ago, panettones started to get fashionable in France, the price was quite expensive. Now even the supermarket’s own store brands have their panettones, the price lowers consecutively.

What is the association with panettones with Christmas? Is there some symbolic thing, or is it just like making iced sugar cookies, i.e. one of those things people just do?

What is the association with panettones with Christmas?

Not only Christmas, new year too. My FIL is Italian, he couldn’t pass his end of year without it. 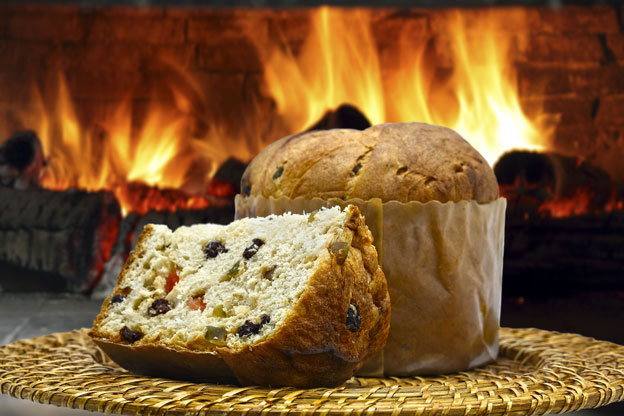 A well made panettone takes three days to prepare.

Agree with posters who have already highlighted quality ingredients, use of alcohol and sales during holidays contributing to price versus the vast knock off ps selling for less.

They freeze well so we buy a dozen for the year to use in bread pudding, french toast and trifle desserts. Nice alternative to fruitcake too.

The cynic in me suggests you have already identified the reason. Put the word “artisan” (American) or “craft” (British) near any foodstuff and it immediately becomes expensive.

I used the quotes not so much to criticize the craft movement. In fact, I like quite a lot what some of the craft movement is doing. I enjoy my ‘craft’ bread for example, but a mass produced ciabatta may be $3 and the craft one may be $9. So if we assume craft products are 3 times costlier. Then in the panettone world, the craft one is like 10 times more expensive, which was the source of my original confusion.

Williams Sonoma sold one that was absolutely deliacious.

The more expensive ones are imports from Italy right?

Do people gift panettones? I can see fancy packaging / gifting may raise the price.

The cheap stuff, if it’s dense enough, makes good toast— too big for a vertical toaster though!

That’s quite expensive. I suspect they try to align to the price of a cake in US.

Do people gift panettones? I can see fancy packaging / gifting may raise the price.

Sure, they buy for themselves or as gifts too.

It would not be Christmas without a slice of panettone. With its soft dough; fragrant, rich in butter, eggs, raisins and candied fruit, it welcomes the Christmas season. Stanislao Porzio, creator and organizer of the event

Do you know pandoro, another Christmas cake that looks quite similar to panettone. These two sweet treats have their supporters and they are in battles on Italian Christmas table: 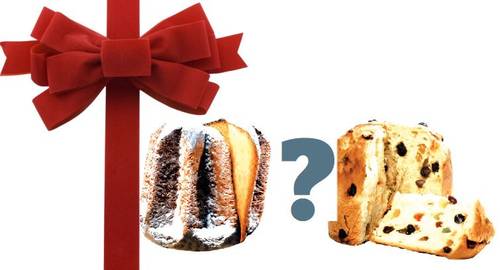 The most famous derby on Italy’s Christmas tables

Walked past an Italian grocery yesterday, it was after my meal at Ipuddo. Saw on their display, chocolate panettone on promotion, instead of 19€/ $23 now 14€ / $17. Got one without hesitation, even the new year is long gone! 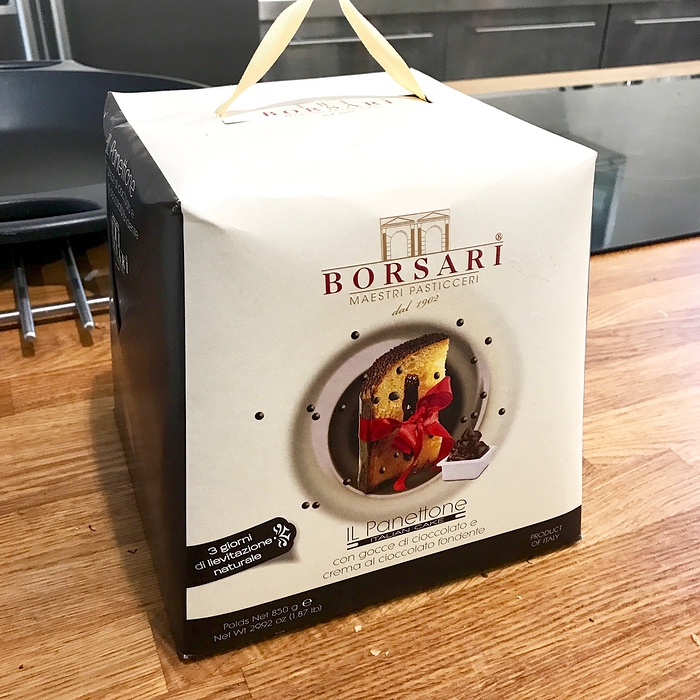 Very chocolate, although unlike the classic ones, no candied fruit. 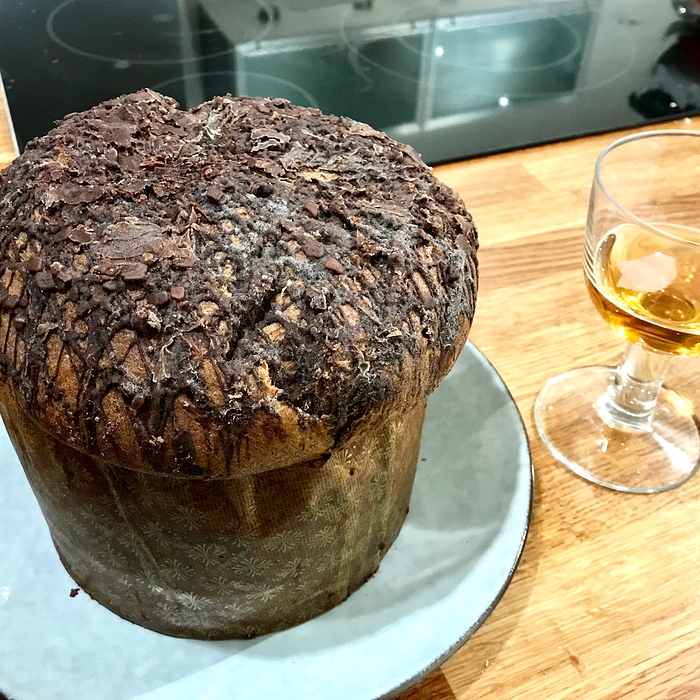 Two types of chocolates inside the cake: “grain” and cream. Not very sweet. The cake itself was soft, but not extremely fluffy like some. Not dry and not wet like the one we had tasted in December with lemon confit and alcohol. I sense some alcohol but looking at the ingredients list, there were none, must be the 3 day of natural leavening they talked about on the box. Both of us enjoyed the cake. 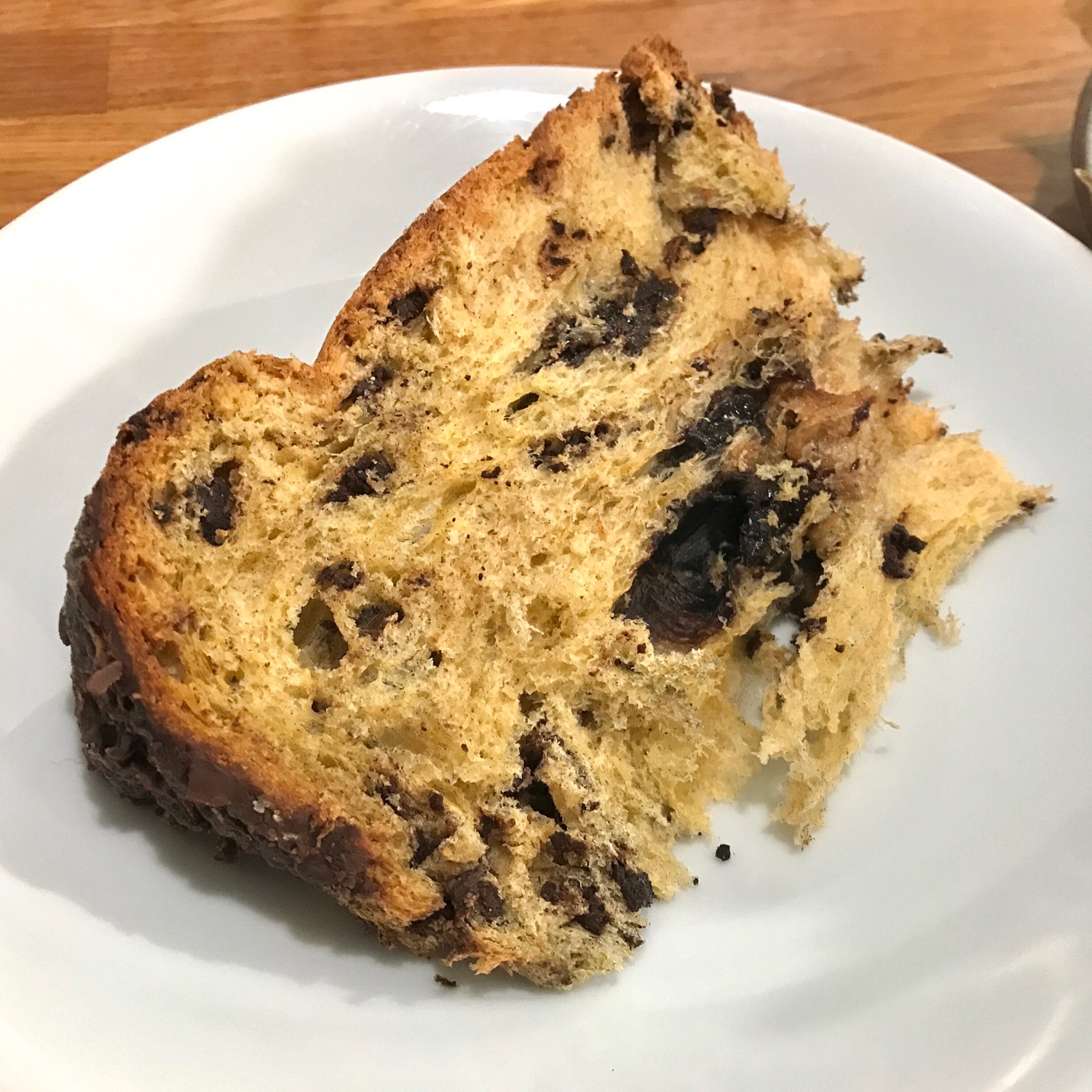 Eric Bordelet’s Apple cider was a perfect match with the cake. 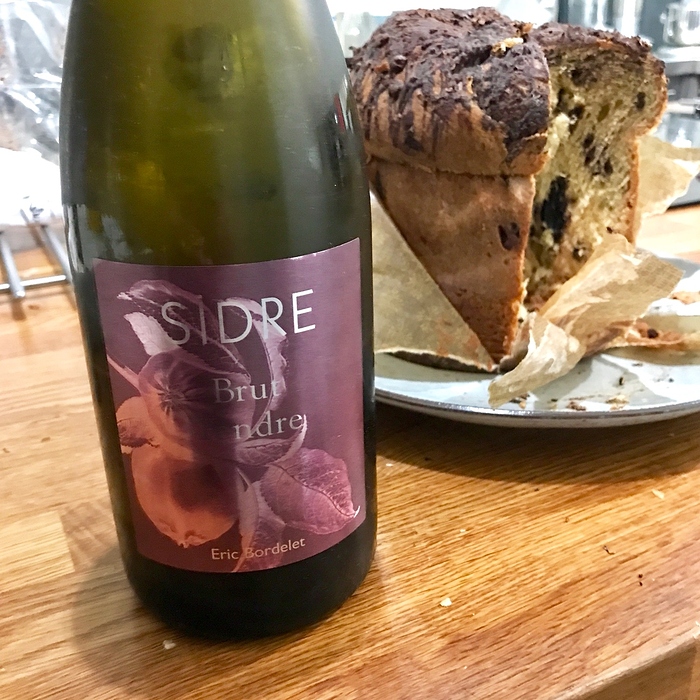 I tried to find some panettones in January. In a Italian grocery with good reputation, the cheapest price was 36€/$44 (Forget about it! I would rather get a fresh cake from a pastry shop.)

N.B. Actually is panettone a bread or a cake? For me it is more a brioche.

Here is an interesting article about the making of a panettone: 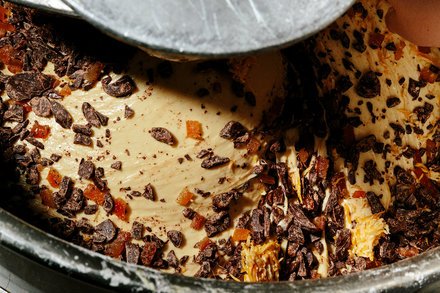 Panettone Has Become an Obsession for American Bakers

The Italian holiday bread is revered among serious bread bakers for its extraordinary texture and flavor, but getting it right is a challenge.

Not yet Christmas, but bought ourselves some panettones. First one was café and chocolate panettone, from Vergani. 18,50 € for 750g. 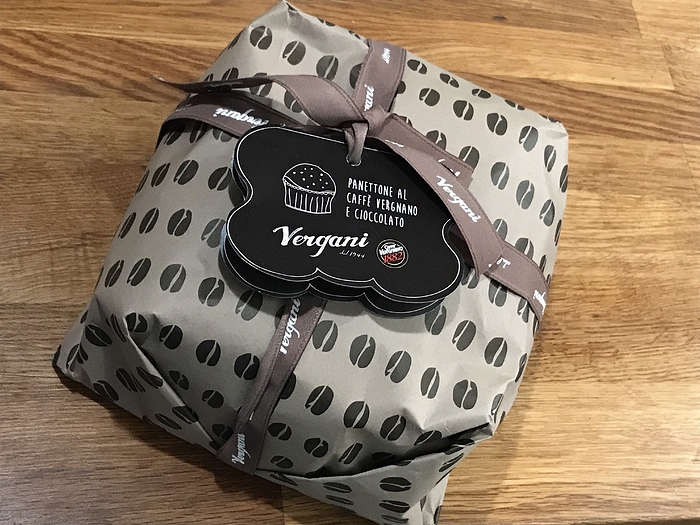 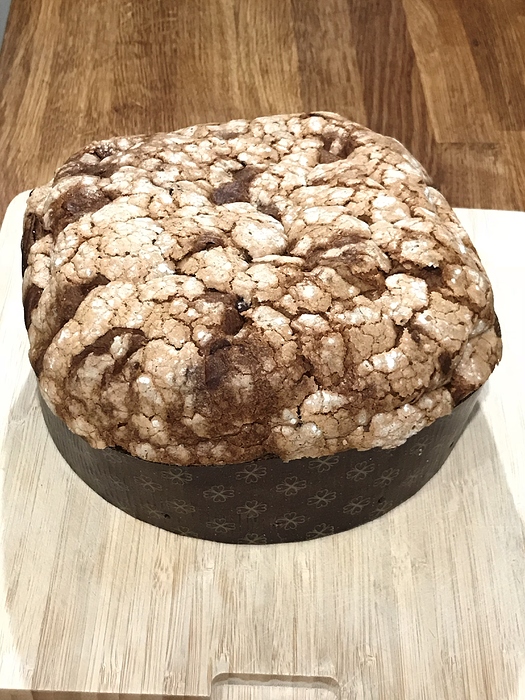 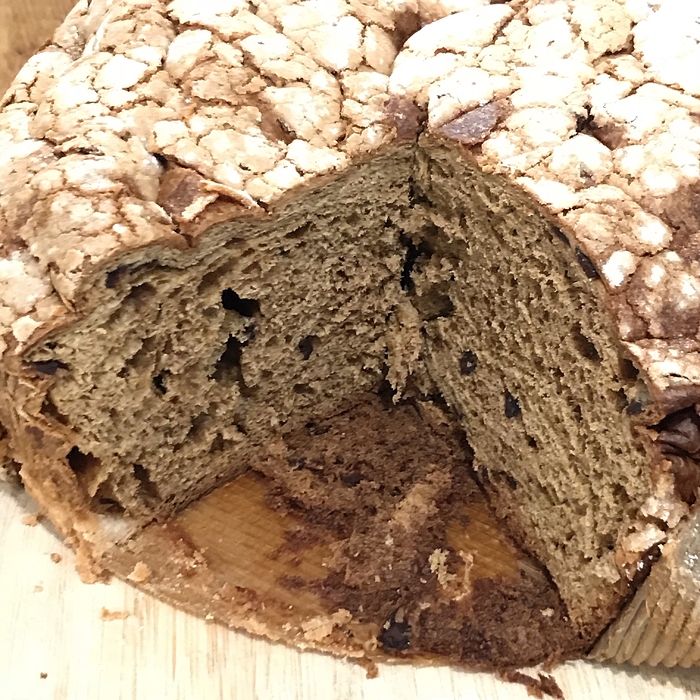 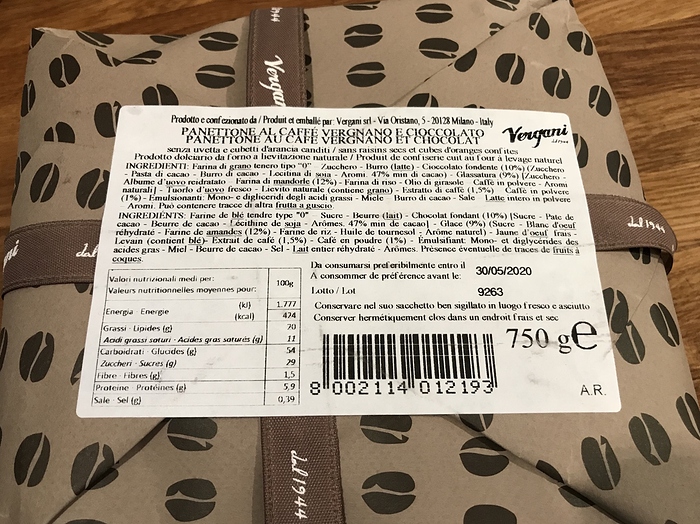 This tiny 80g / 2.8 oz pandoro is an import from Italy under a French supermarket Franprix’s own brand. The taste is correct, airy but back to basics, without the fancy dried fruits, chocolate… 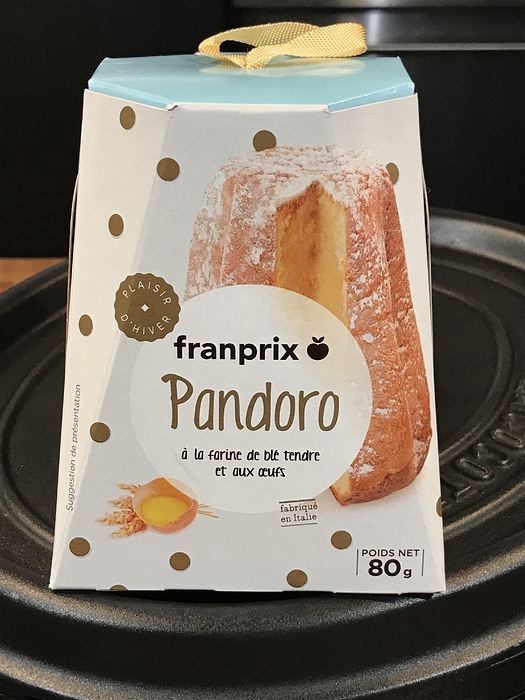 A dessert spoon, not a soup spoon! 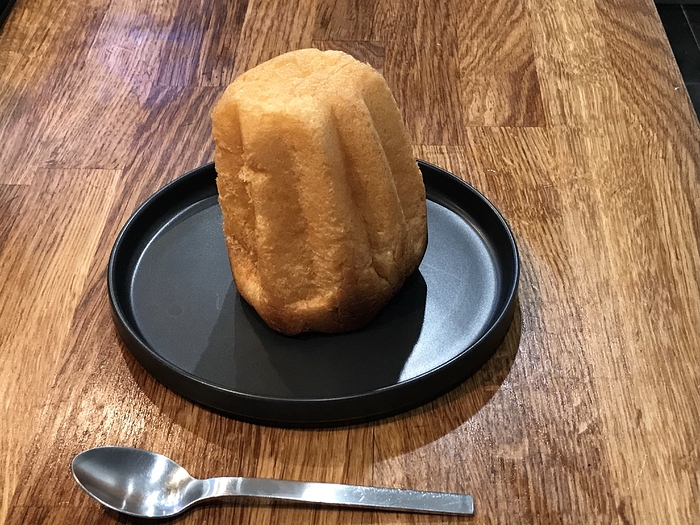 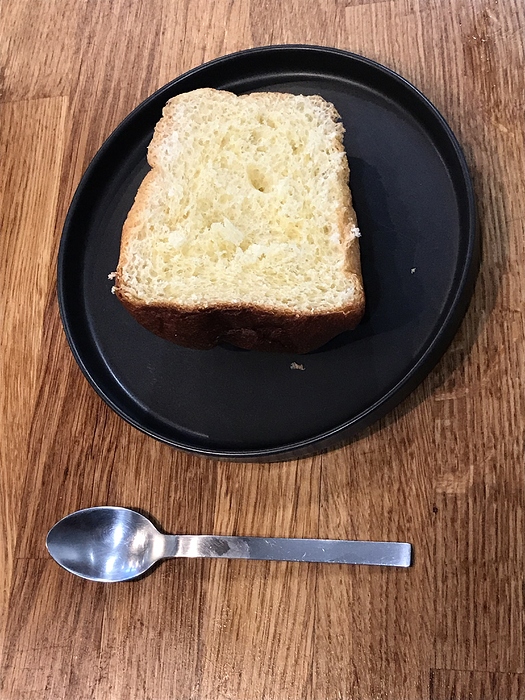 With less than a week to go before Christmas we turn to the cakes that Venetians will be eating next Monday. The traditional Venetian Christmas cake is so famous that you can find it almost anywhere.