Where to eat in The Hamptons, Long Island off season?

We will be staying at The Bridgehampton Inn, owned by Loaves & Fishes, for a few days in early spring. Need additional off season dining suggestions in the area. Thanks!

Nick & Toni’s in East Hampton is a must have. As soon as you sit down and before you even look at the menu order the zucchini chips, like none anywhere.

Topping Rose House, pretty much next door to where you’re staying. Open year round. That’s the first one that springs to mind. I’ll come back with a few more, but how far do you want to travel?

We will of course have a car. From Montauk on in, I guess…Thanks!

I’m going to throw a few out there; as you probably know most places don’t open until towards the end of May but I’m pretty sure these ones are.

Montauk: Kinda slim pickings but The Inlet at the end of East Lake Dr (almost to the lighthouse) has great food, including sushi, and one of the best views in town. They are only open weekends right now. http://inletseafood.com/ O’Murphys Irish Pub is fun and a nice menu, well executed (I always get their fresh tuna), plus a great atmosphere as you would expect. They moved up by the Dock recently. http://omurphyspub.com/ My favorite seafood place in town is The Clam and Chowder House, also by the dock, but I don’t think they open until sometime in April. http://www.clamandchowderhouse.com/

I’ve only been to Nick and Toni’s once, off season, and the service was impeccable. I did find the menu offerings we got hit or miss though. Not rushing to go back. It’s more of a “see and be seen” place to me. In the off season, you won’t be seeing too many people you recognize though.

In Southampton, Plaza Café is considered by most to be the best high end seafood restaurant in the Hamptons. http://www.plazacafe.us/

Nearer to where you’re staying, for lunch I might suggest World Pie right up the street, it has quite a menu besides pizza and is very comfy. http://worldpiebh.com/ And for breakfast, either Estia’s Little Kitchen on Sagg Main Rd heading up towards Sag Harbor http://estias.com/ or the Candy Kitchen right by you, an old fashioned diner famous for their ice cream. Those would be the places to go earlier in the day.

I’ll toss a few more at you in a bit, if no one else does

Just got back from my off season visit to The Hamptons on L.I. and wanted to do a trip report. First of all, let me say that even in the off season The Hamptons are great. It was not overly crowded, everything was accessible, and most of the restaurants we had set our sights on were open, some on curtailed schedules.
Let me start with our only downer of the week: Southampton Publick House. After a walk thru the lovely town we ended up there and the food was mediocre. The Southampton beer made up for it somewhat. And, what’s with those crackers and butter everyone was munching on? Things went uphill from that point. On the way out of Southampton stopped at Tate’s Bake Shop and bought some of their cookies to snack on during our stay. They are good.
We stayed at The Bridgehampton Inn which is owned by the folks behind Loaves & Fishes. It is a lovely place right next door to their Loaves & Fishes Cookshop. It came with a fine breakfast each morning, with most of the food and table top utensils coming from the L&F catalog.
We had our first dinner at The 1770 House Restaurant & Inn in East Hampton, practically around the corner from Ina Garten’s home. We chose their Pub Room, which was cozy. Food was exceptional! Stand outs were the Short Ribs and individually sized Meat Loaf. The house Cheesecake was a winner, and the service was fine, too.
Went out to Montauk the following day and hung around the Lighthouse for a while. It was so soothing. I had been curious about the multi-million dollar renovation and expansion going on at Gurney’s Montauk Resort so we dropped in. And it was a jaw dropper! What a change from what I recall years ago. The buzz: It was taken over by a high powered restaurant group that owns spots in the City, and Chef/Restaurateur Scott Conant is involved. The main dining room has been totally modernized and redesigned but was only open for dinner, so we opted for their casual eatery called Tillie’s. It was wonderful, sporting a view of the deck and ocean and top notch kitchen. Notable dishes: Beet Salad, Avocado Tartine and my hearty Dagwood Turkey Club. We wanted to go light that evening, so we decided to try Mercado, the Mexican restaurant just outside of town in Bridgehampton. The Mexican Street Corn and Beef Nachos hit the spot. Nothing fancy, though.
Dinner on our final night was at iconic Nick & Toni’s in East Hampton. This bustling restaurant has been drawing in The Hamptons crowd for 27 years, we were told. The evening we were there it was quite busy. They are part of a larger group now that owns the local BBQ restaurant and another Nick & Toni’s in Manhattan. Well, it turned out to be a wonderful experience. The service staff was right on to help it along. Outstanding dishes: those popular Zucchini Chips, Cod Filet, Roast Pork Cassoulet, side of Brussels Sprouts, and their house Chocolate Tiramisu. Tried a specialty beer from Maine that I must share with you: it is named ‘Peeper’ and was very refreshing.
During our stay we visited one ‘Irish’ Tavern twice: Rowdy Hall in East Hampton. It was so friendly and comfortable. They surprised us with a complementary Irish Whiskey Cake. We found out later that it was owned by the same group behind Nick & Toni’s.
On our way out we made one final food stop at Loaves & Fishes Cookshop for some of their delicious Scones, Country Pate, Cornichons, and Orange Marmalade to take home…we’ll be back!

Thanks for the report. Glad you had plenty to choose from

Thanks for all your suggestions. Coll, we searched out a few of yours in Montauk, and you were right about the seasonal hours…

Yeah, the season doesn’t really start until the week before Memorial Day. Especially in Montauk, until Fourth of July it’s still relatively quiet. But you get the bonus of no traffic and no insane crowds so you did good.

As a correction to my trip report I must correct some info regarding Gurney’s. LDV Hospitality Groups owns restaurant properties around the country and Puerto Rico, locally: Scarpetta and American Cut in Manhattan. One of the consulting chefs is not Scott Conant as I originally stated, but Chef Marc Forgione.

You’re actually making me want to go there now. Was never impressed when the Montes were running it…except for the view!

You will not recognize the place…

Glad to hear it. It was turning into such a dump, sad to say. It’s a really nice property.

There were work crews there and it looked like they were expanding. Check it out the next time you are in the area…some of the story is online.

Hopefully not the Army Engineers, shoring up the beach. That’s something the locals are up in arms about right now, so many changes for everyone there the last few years.

So to catch up a bit on this thread, what’s been tasting good out in The Hamptons this season? Share your experiences…

Ed’s Lobster Bar, Sag Harbor: Used to be Bay Burger and has been gussied up a bit. Lobster Roll ($34) had a lot of meat but not as tasty as Duryea’s. Lobster mac-n-cheese was very good.

TT’s, Montauk next to Salivar’s, near Gosman’s Dock. Tacos and Tequila. Small but excellent tacos and $5 happy hour margaritas. Surprisingly the meat tacos were better than the seafood. The lengua mole and steak were excellent. $5 each. Good casual après-beach snack place as portions are small.

Duryea’s on Lake Montauk: New ownership since I was last there and the prices and menu are much more upscale. Having said that, the quality of the food was excellent and there are a bunch of family style large portion items. Setting is fantastic.

LT Burger, Main Street Sag Harbor: Great burgers and shakes, decent beer selection. Burgers are large, cooked properly and most come with a pile of fries so try to order so not everyone is getting fries as you can share them. Tip: if you get the burger/shake combo ask them to make the shake after you’ve had your burger. They also had a single scoop Sundae with choice of toppings for $4 which is about all you can put down after a giant burger.

La Fondita, Amagansett: Order at the counter and eat outside at a picnic table. Very popular middling Mexican American food, but setting is nice enough. 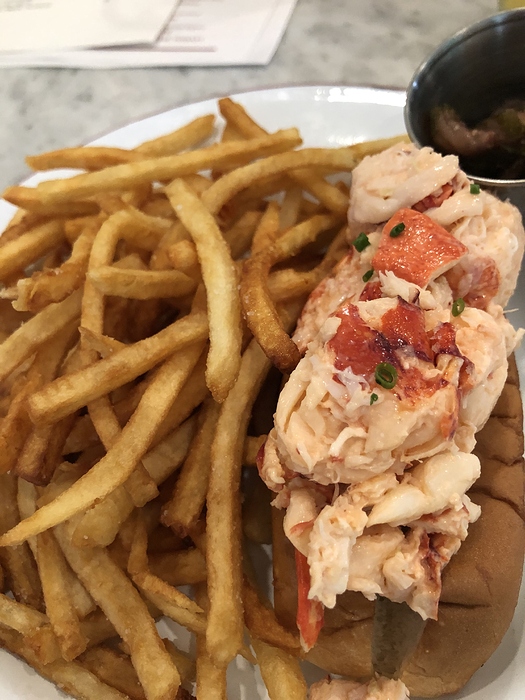 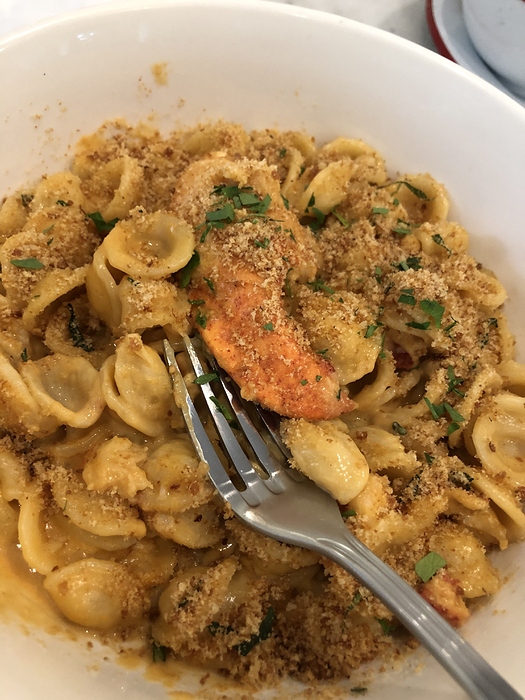 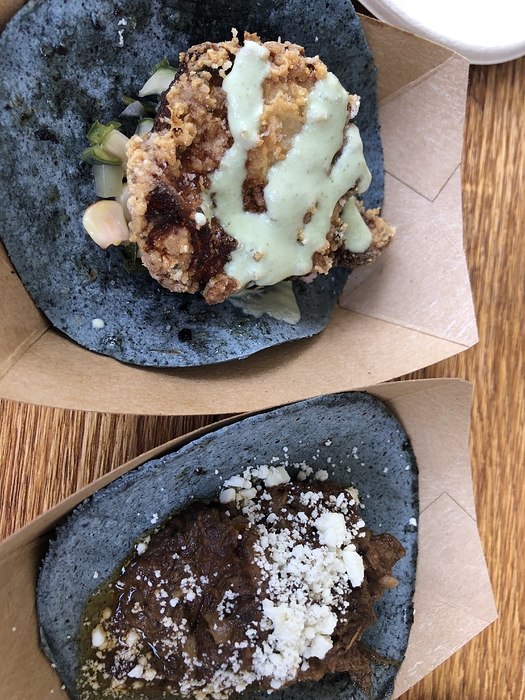 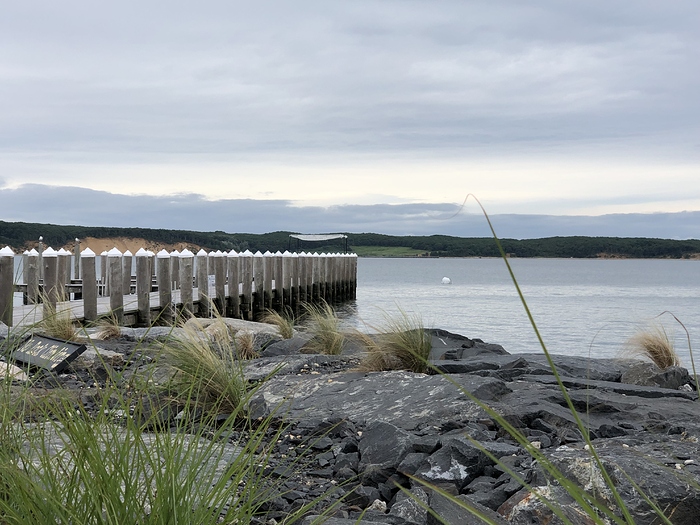 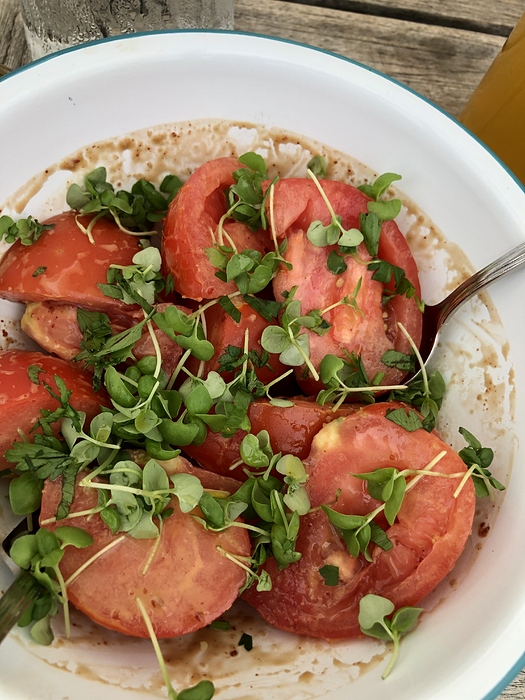 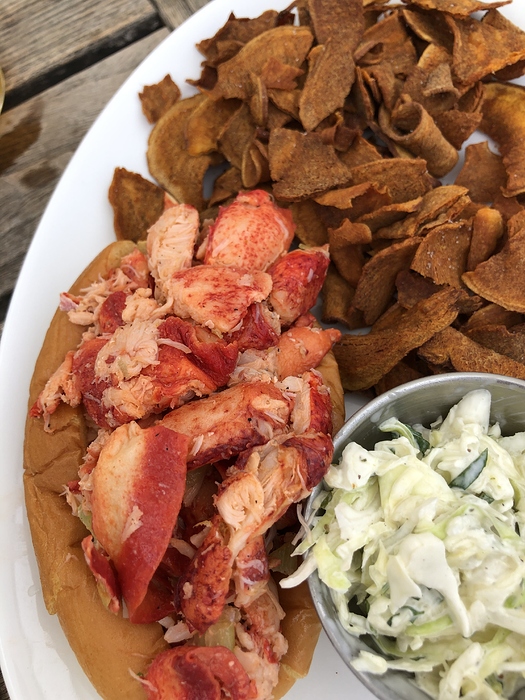 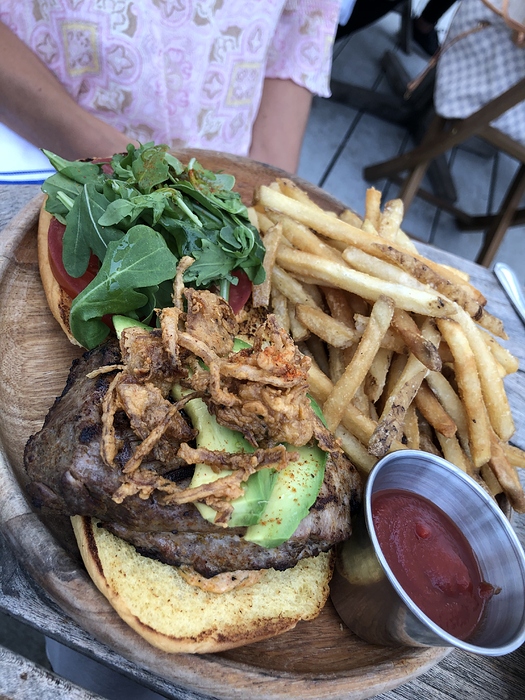 Nice report, although we are usually in Quogue when in the Hamptons. As the Boston-faction country bumpkins family members, the snack bar at Quogue Beach Club suits us just fine.

I like Quogue! The kids wanted to try some ice cream place they heard about in Westhampton that has crazy candy toppings, but the traffic on 27 is so insane in July that we never ventured further West than Southampton.
We also hit Wolffer for some wine tasting one rainy afternoon - they had a folk band playing, lots of tables - bit of a scene but fun.