Where can I find Hebrew National Beef Salami in SF?

I happened on it one time 7-8 years ago at the overpriced Mollie Stone’s on California (near Fillmore) but they don’t seem to stock it anymore. Safeway carries HN products but not the beef salami. I grew up slicing and grilling this stuff on the East Coast, it was a staple of our summer BBQs. For some reason, it’s nowhere to be found in San Francisco and I’m even having trouble finding a reliable online source that delivers to California. Any suggestions?

There’s a small kosher supermarket in Oakland that might carry it. Might be worth giving them a call. https://www.oaklandkosherfoods.com/

Thanks! They’re closed Saturdays so I sent them an email.

Hebrew National doesn’t meet the kosher standard for most Orthodox Jews, so a kosher market definitely won’t have it.

Lucky on Sloat carries a different brand, could be hit or miss with stock.

Here’s a question for the OP: how do you grill beef salami?

1/4” or 1/2” slices like burger? I’ve heard of smoked and/or grilled baloney but never salami but it makes sense seeing baloney grilled.

Exactly as you described; prob closer to 1/2” slices directly on the grate so they develop a nice char. Then served on a platter with deli mustard. Usually left out to nosh before the burgers etc. are done.

My wonderful great uncles, Dave and Ralph, always had a large Hebrew National salami hanging in their glassed in back porch in Pittsburgh. When we would visit them , they would slice off pieces for us. (They’d always shake hands with us as well, and a silver dollar would magically appear in your hand.) I usually get a “beef salami” sandwich at Saul’s in Berkeley. I don’t know if it’s Hebrew National, but you may want to check with them. I also may have seen it in the overpriced Mollie Stone’s stores in Sausalito and Greenbrae, but I’m not positive. I’ve never had it grilled though. My family wasn’t big on barbecuing.

Hebrew National doesn’t meet the kosher standard for most Orthodox Jews, so a kosher market definitely won’t have it.

Really? I had no idea. I thought it was the kosher standard, but I grew up Conservative so what do I know.

I guess the Orthodox rabbis are the higher authority. https://www.youtube.com/watch?v=Qf2j-YzZRAA

At the time of that ad, the Conservatives didn’t regard it as kosher either, apparently. 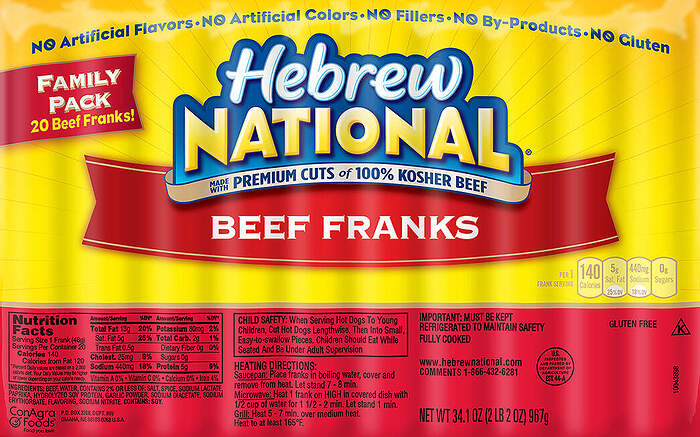 Hebrew National has been producing hot dogs and other sausage products for well over a century. Founded on the Lower ...

How interesting. We had Hebrew National products in our house throughout my childhood in the '70s and '80s. Maybe my mother wasn’t all that picky.

Is this what you’re looking for? 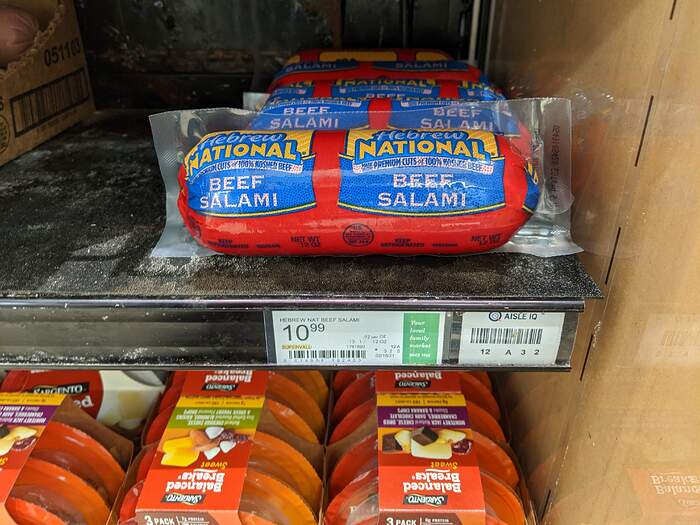 I saw it at the Mollie Stone’s on Portola among the sliced deli meats.

Sure, its across from the dairy section in the back of the store.

I just picked up a couple of them and discovered that they have larger sizes behind the deli counter too! Thanks again!!

I had a craving for Hebrew National Salami a few months ago and couldn’t find it anywhere. My son was coming up from LA and I asked him to bring me one. Later I found it in the deli case in Draeger’s in San Mateo but only by the slice ($18.99 per pound), the log had to be about 5 lbs. I was down visiting him a few weeks ago and brought 2 back. I wish I had thought to inquire here and wasn’t online much then anyway. Glad you did and now I’ll check Mollie Stone’s down on the Peninsula. I don’t grill but it goes into a frying pan and I make a sandwich with Gulden’s mustard. So basic, so good. It brings back memories of my mother making it for us kids. THANKS.

That sounds like the Wilensky’s Special from Montreal - (look it up!)

I was surprised when I pulled into the lot at Mollie Stone’s, not having known the old Tower Records building had been turned into a bourgie market!

Doubly surprising, as it was never a Tower Records.

Huh, whaddya know… the building looked kind of similar to the original Sacramento store in the 60s

I guess SF just had the one on Columbus, not Portola.

And one on Market St in the Castro. And one at Stonestown.