What are the kitchen knives that you have immediately available in your home kitchen? The ones that have been sharpened and are ready to use? Mine are grabbable from two different magnetized holders:

Retired (over 30 years of service)

Ray, that’s a lot of knives.

A correction and a few clarifications, too late for edits. The petty is 6", not 8". The Non-Nogent parer is 4", kind of a klunky size for paring. It is used almost exclusively for hard cheeses. The 8" chef and the 6" petty are used chiefly by my wife. The 10" slicer gets used very rarely for things like poultry where the narrow blade is helpful. Most slicing gets done with the 10" chef. The Au Sabot bread knife has the sharpest serrated edge I have ever used.

The problem with high Rc knives is that a lot of people don’t know how they should be used. I wouldn’t allow one near anything but an end grain cutting board and no hard product.

New hire, hot shot, $15/ hour tattoo guy with “mad knife skills” usually has to be pulled to the side to explain why half of what’s in his knife bag is absolutely verboten. He can take his show to Sushi Jimmy’s down the street.

Suzy Homemaker going through chicken bones with 60+ is going to be serving her family fine Japanese steel for dinner.

~58 is plenty hard. A few points on the Rockwell scale is a lot.

I have more knives than needed but 99% of the time I grab one of the Global chef’s knives or the Global Vegetable knife.

If I’m going to be reckless then it’s one of the Mercer chef’s knives.

It depends a lot on culture. When I got started, it was a 6" Bowie style hunting knife to clean game–and a butcher knife to cut it up. Utility knives or other kitchen tools for the veggies.
.
Revolution #1 Some year later, in Japan, they gave me a nakiri and told me it would be great for those veggies.

Revolution #2 About 7 years ago, I decided to make home cooking a serious hobby. My Scandinavian and Scottish roots led me to choose a Wusthof 8" Classic Ikon–and later a 3 1/2" Wusthof Precision parer–and I was Europeanized. Learned to rock chop–use different parts of the Chef’s knife for different tasks: didn’t use my butcher knife as much . . .

That Seki Magoroku nakiri I was given was unbeatable for veggies–and I had a Japanese collaborator come over and show me how to push cut.

Revolution #3. My Japanese collaborator explained to me that back in Japan they had switched from nakiri to santoku, so I thought I’d give one a try–but an Americanized one. I ended up with a Shun Kaji–that looked a bit like my Classic Ikon–with a completely unique profile and damascus cladding over a sg-2 core.

I switched to push cutting for everything–and my Shun Kaji hollow ground santoku displaced my Wusthof Classic Ikon as my effective Chef Knife–and I even got a small 4 1/2" sg-2 Kaji Petty to back it up.

I sent a flexible 9" SS slicer w/burnt handle to my morgue, and upgraded to an American Ken Onion 9"–keeping my Americanism alive.

I added several other American upgrades, including a 6" tojiro sandwich knife, and I was rolling . . .

I had this almost genetic need to chop–and not that civilized European rock chopping!

Revolution #4. At Chowhound, Damiano showed us how he could do almost everything in his kitchen with a Chinese vegetable cleaver–and it seemed like a safe way to get chopping out of my system, so I shopped around and found an 8"X4" truly Chinese Shibazi Cleaver. Damiano was right–and I now had my chopper: Given the muticultural SOCAL world I currently live in-especially with our local recent Chinese immigrant community–I’ve begun to look for ways to fuse those cultures in my batterie–and have even taken to repurposing a single beveled deba to retire my old butcher knife. Cultural fusion is where I’m thinking these days.

I forgot to mention it, but shears are absolutely critical in the kitchen. I have a pair of Wusthofs that are grabbably close and often used.

but shears are absolutely critical… I have a pair… that are grabbably close and often used.

My Zwilling block actually has a little spot below the knives for them. 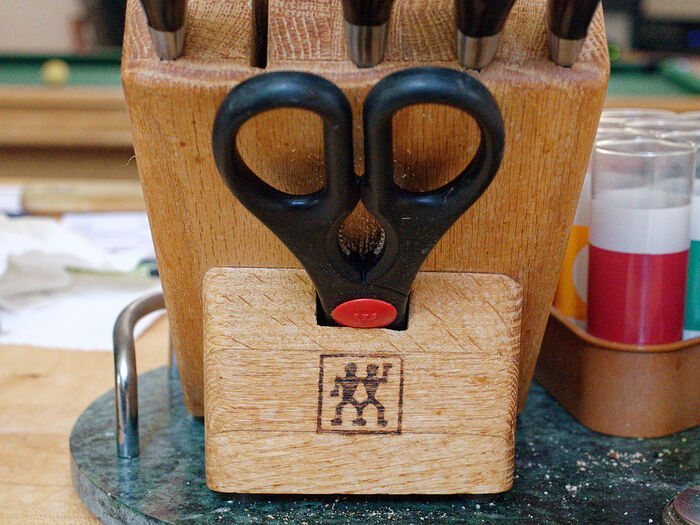 Hear! Hear! I actually have a scissors batterie to rival the core knives: basic no name pull aparts I got in France, a pair of poultry shears, and big loop handle, small narrow blade Japanese ones that double at dead heading flowers and harvesting herbs. The long, curving blades of the poultry shears do a much better at separating joints than the shorter, straighter ones, that can slip in schmaltz.

Could you go into a little more detail? On what basis do you choose, and what are you choosing between.

There are lots of interesting differences between Mercer and Global, and lots more profiles than chef’s knives.

Do Global and Mercer Chef’s knives have the same profile? Do you use the same strokes and hold them the same?

BTW… I have a second block of Zwilling J.A. Henckels Four Stars that I no longer need/use:

These are all well used, but in excellent condition. I was gonna put them on eBay, but if any of you are interested, make me an offer. I’m in the U.S., and as this is a pretty weighty package (with the block), guessing shipping will be crazy to other countries.

They are all ~8 inch. I use the Mercers where I don’t care about the edge or don’t want to hand wash a different knife. I toss the Mercers into the dishwasher and will throw them away if I can’t get the edge back.

The Globals are not expensive but I take better care of them. Why? I don’t know.

I rarely ever use any other knife than those pictured.

Yes, my grip might change based on the task not knife. 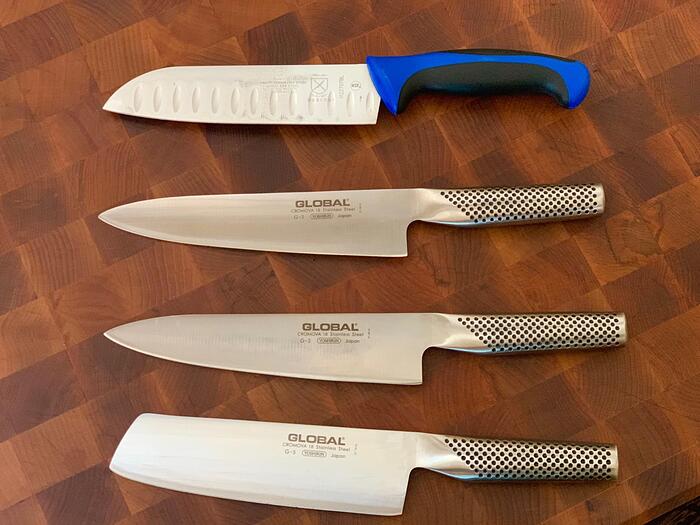 Globals were the first production Japanese knives to succeed in the Western market–but are not sold in Japan. I cut a few carrots with one when I was deciding on my Wusthof Classic Ikon. I really liked the 1/4 bolster transition from handle to blade–supporting a pinch grip.

The Mercer santoku is an incredible value for the price.

Problem with both is maintenance of knives with softer steel. The Global is a little harder, but requires much more maintenance than my HRC 60+ knives.

My kitchen knives are always subject to challenge for their grabbable slots as I consider upgrading or repurposing. Two have been forced into retirement–but are emergency replacement. Two are in my morgue.

But quite a few others have been given away to friends and family:

I’ve never sold any knives–but some have been given to me.