Just wondering what the word is on the Dungeness season further south of Alaska.

It’s a little early. For CA status (i live in zone 4) I start checking this page November 1st. There are usually announcements around that time.

I also sign up for text alerts from https://www.hhfreshfish.com/

I think the season doesn’t start 'til the 1st week in Nov or so. I’m hoping it’s at least decent, because we have a friend’s 60th bday weekend planned for the coast, and part of that plan is crab sandwiches & oysters. Possibly more than once.

I haven’t heard news yet, but i can’t remember the last time the commercial season wasn’t delayed, and Christmas wasn’t more realistic than Thanksgiving.

The heralding of the Dungeness crab season might be what I will miss most about Chowhound.

QFC/Kroger (PNW) is advertising previously frozen whole cooked Dungeness this week. $8.99/lb. Doesn’t mean they have it in stock, however.

Local Safeway says they have them at 12.99/lb. But it says they’re Alaskan.

BTW… it says (like many seafoods) “Seafood Counter cooked previously from frozen”. Why do markets do this… if it comes in frozen let me buy it that way, instead of sitting around thawed in the seafood case?

cooking/cleaning whole crabs isn’t difficult, but it IS a mild-to-moderate pain in the ass, requires at least a little knowledge/research (which bits CAN I eat? Which bits SHOULD I eat? How do I open the thing without smashing it with a hammer?) Many, even most (?) people are willing to pay extra to not have to worry about these questions.

I agree I’d rather just buy it frozen. Luckily where I shop, they’ll have the “previously frozen” stuff behind the counter but also will have the still frozen stuff either in the back or in the regular freezer section.

My guess is - especially with shrimp or prawn - they thaw for the customer who only wants a smaller portion than the original packaged portion size. Or maybe they just need to fill up some space in the counter section.

Ok… that is a good point, IF it all comes frozen together. Maybe the swordfish steaks are all in a frozen together block that needs thawing to separate, or perhaps they get larger cuts of fish that require thawing to butcher. But Shrimp or whole Dungeness crabs!? (c;

Maybe folks think it is fresher if it is in the seafood case opposed to selecting it out of the freezer, but up here… almost everything in the “fresh” seafood case is from frozen, which is usually why I ask to smell it before purchasing (and there are way too many fails).

I’m not usually negative, and I know I’m fortunate to have a choice, but a post about the crab season, then referencing frozen Dungeness is a crushing disappointment!

Granted it’s work, but it’s only a few months, and that’s if we are lucky.

Not sure I get what you mean. Where I live now there’s no access to live crab, so cooked, frozen is our only option (other than canned).

I do understand that not many have the option, and I apologize for my “parish-pump” behavior.

I like adding words to my vocabulary! I am working “parish-pump” into a conversation this week

“Granted, it’s work” meant, if it is available to you, recognize that at least in my opinion, you should at least try it “fresh”, as it tastes very different, even compared to when cooked hours prior.

I’m sure it’s all good, but the fresh is something I wait months for.

Two questions
Do you know if they have it live in tanks in Sacramento?
If it’s frozen, what difference does the season make?

They DO have it live in tanks in Sacramento. The main place I’d try is Sunh Fish (1313 Broadway). I’ve gotten them there for a couple of years in a row now. It’d also be worth trying some of the Asian markets in town (99 Ranch, SF Supermarket) that have relatively sizable live sections.

I always feel incredibly guilty not using the ‘crab butter’ fully. I’ll mop up some of it with some bread, but I KNOW there’s more I should do with it, and the shells. But you have to get that stuff out of the house THAT NIGHT or in the morning your kitchen garbage is gonna require a respirator to deal with.

There are 99 Ranch in Sacramento?

It might help to know some years the “butter” is not considered safe.

I freeze the shells and fiddly claw pieces the same night (to make stock for gumbo), but yeah; the rest of it; “off you go!”

Do you know if they have it live in tanks in Sacramento?

I don’t… but even if they do, it’s two hours round trip to get it (can’t justify that).

If it’s frozen, what difference does the season make?

I know about the butter not always being safe, but as far as I know, you’d have to eat quite a bit of it, or eat it quite often, for even the ‘unsafe’ years to make an otherwise healthy adult sick. But I’m only vaguely recalling info I ‘heard somewhere once’, so I’m happy to be pointed to better info.

And yeah, using the shells for stock is the move I WANT to make, but freezing the shells never crossed my mind! Do you just rinse off whatever gets left in the shell bowl, put it in a couple of layers of ziplock and chuck it into the deep freeze?

at least in my opinion, you should at least try it “fresh”

You are absolutely right! Growing up in Culver City, Redondo Beach, Santa Monica, and Carlsbad, as a certified diver since the age of 13, fresh abalone, clams, mussels, lobster, urchins, and a bunch of other stuff was a given. But for crab (my all time fav Alaskan King), I just went out and ordered it at dozens of places in the 'hood that did it up big time for what was then a reasonable price.

That crab, clams, and the abalone are the things I miss most in modern times. Now-a-days I have come to the realization that everything will be frozen. But if you live in a place where you have the opportunity to buy fresh, ya gotta do it!

Do you just rinse off whatever gets left in the shell bowl, put it in a couple of layers of ziplock and chuck it into the deep freeze?

Yes, although I smash up the backs a bit ( which I understand don’t add much flavor) so I can fit more, and smash sharp edges so they don’t poke holes in the bag. I think the fiddly claws and picked body pieces make the most difference, and as the season goes on, I pick the crab less and less meticulously.

Melanie Wong on Chowhound had a great thread, about streaming them, among other things.

I remember a recipe where the tomalley is finishd with butter in the backs. Not sure, but there’s this. 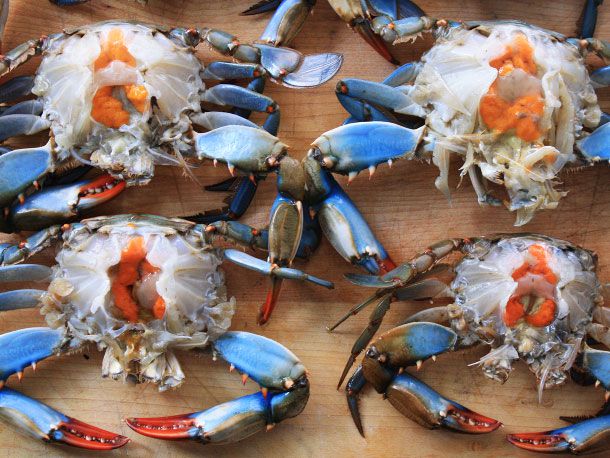 One of the nicest things about buying live crabs instead of lump crab meat is that you get the whole measure of the animal—not only its succulent flesh, but also its creamy innards and the sweet, briny juices that pool in the curve of the shell. My...