I think we had a similar thread a long time ago in a galaxy far, far away. Did you buy (or make) an interesting lunch? Let us know here.

Yesterday I went to Mellow Mushroom on Shepherd. Not too many other tables were occupied (but it was Monday when people brown bag it a lot for some reason). However, the service seemed slower than absolutely necessary.

We had wings (sweet thai pepper and hot mixed) which were good and came with ranch and blue cheese. One had the signature mushroom soup, which was thick and “hot enough for me” he said, which means probably not hot enough for me.

I had seen friends “check in” here for some time and looked at the menu online, picking the chef salad for my lunch in advance. Two of us ordered that but were served their regular house salad instead. I don’t send stuff back because it just takes to long to correct such mistakes. I had the spicy ranch dressing which I liked very much and the salad itself was fresh if a tad boring compared to what I anticipated, it had sliced tomatoes, black olives, onions and shaved parm.

One of us had a vegetable pizza which he liked. The menu is much more than pizza with lots of salad options, sandwiches, appetizers, gluten free, vegan, you get the idea. Next time I’ll visit the other pizza place in that 'hood, Cane Rosso about a block away. It is closed for lunch on Mondays.

Nothing earth shattering, a bowl of linguini with Rao’s marinara sauce for an early lunch. I cut it with a little pasta water as it’s a little thick for me.

Following a doctor visit I caught a late lunch to go from El Gallo on Gessner. I got stuffed bell pepper and a surprise tortilla the Wifeacita can feed on when she gets home.

“Feed on?” She may be dismayed at that or maybe not! Hehe. She might be used to you. El Gallo one of the many 40 year old Tex-Mex places in town, right? I believe I went for lunch some years ago.

We just fed. Yes, after nine short years of marriage feeding is one of those things shared between husband and Wifecita.

El Gallo, we call it The Chicken, has been there since 1971. It’s unapologetic Tex-Mex I grew up on and love it.

The only thing I see on the menu not seen in my youth are burritos and I’m guessing they were not on the original menu. The kids at work are stunned when I tell them I have had only one burrito in my life, a freebie supplied at work.

Burritos are really weird to me also. I think it’s a north of Dallas thing.

Love burritos, make 'em at home frequently, have a package of Fiesta burrito tortillas in the pantry as we speak.

Also have some leftover carnitas destined for same.

And THAT’S the rest of the story.

Tortilla soup, nice proofreading. She needs to have more than a solitary tortilla to feed on.

I always lump Dallas in with Oklahoma, not necessarily a bad thing. Fort Worth is definitely Texas. I’m on the fence about Arlington.

I took a walk down memory lane today and had lunch at the venerable Mais on Milam. I haven’t been there since long before it burned down and was rebuilt. My preference was for Van Loc across the way, may it RIP.

When an errand took me downtown, I decided to check on the “new” Mais building which opened in 2011.

I ordered my usual Van Loc favorites, shrimp spring rolls and Vietnamese eggroll vermicelli, and added in some wings that sounded tasty as described: garlic and salt. They take 20 minutes so they actually came out last so I had one being already stuffed. It was hot and tender but I didn’t get a ramped up garlic flavor from it. They came resting on grilled onions and peppers. 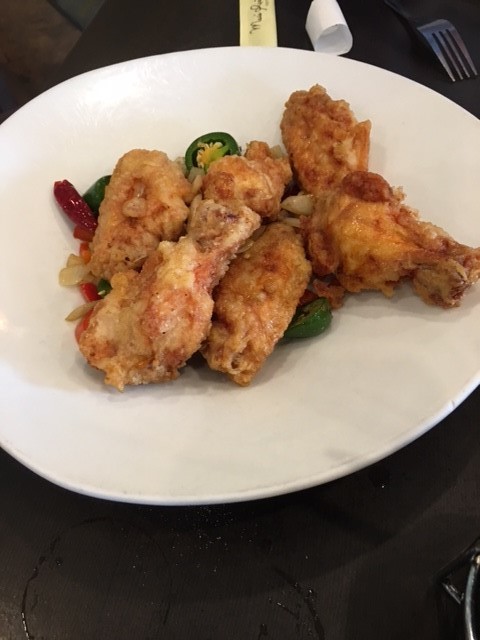 The peanut sauce for the spring rolls was less peanuty and more soy asian saucey. Not my favorite ever but not bad. Four other sauces are served with the meals: sambal, siracha, hoisin and something dark with seeds that looked fiery. 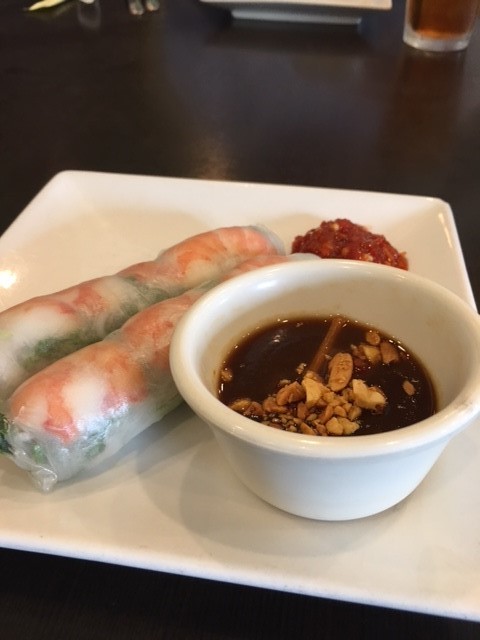 The vermicelli and a shrimp and pork soup were both good as expected with all the herbs and bean sprouts provided on the side. 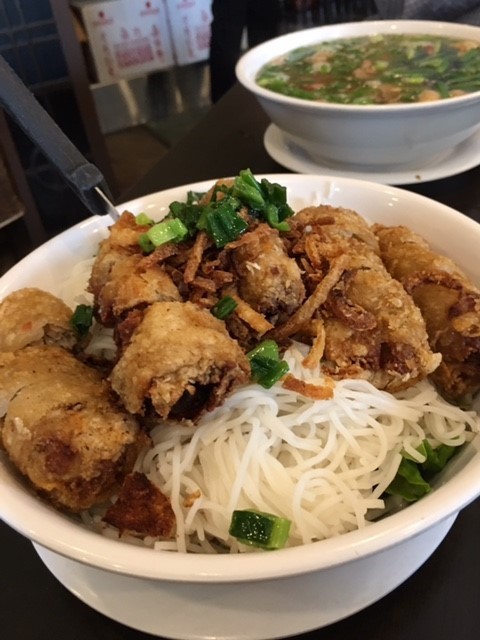 What surprised me were the prices. At VL, you got your bowl of vermicelli for in the neighborhood of $5. Here it was $11. The spring rolls were $4 each. These are actually probably fairer prices for Vietnamese food here.

I wanted to get the green tea ice cream or maybe an iced Vietnamese coffee, but I really didn’t want to hang out there longer, the noise level is off the charts and makes conversation nearly impossible. People shout and that makes it all worse. Also the new dining room seems tiny compared to my memory of the old Mais, although there is an upstars area too.

Driving back to Memorial Park area throgh downtown was a trip. So many new places since I worked downtown back when. I still miss the dumpling place in 2 Houston Center Mall, Doozo. Great dumplings for next to nothing and the dumpling nazi to move things along, ah nostalgia.

And they were bulldozing the Chronicle building today, so end of an era of watching the papers roll off the presses. 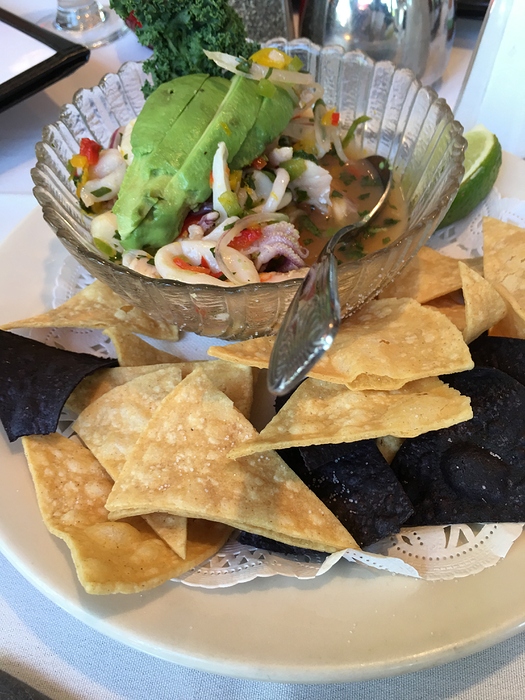 Mandola’s and where are you?

Ah, I should have known.

I had a couple of brisket foldovers at Roegels.

I also had this, this week. A/K/A my favorite dish in all of Houston. 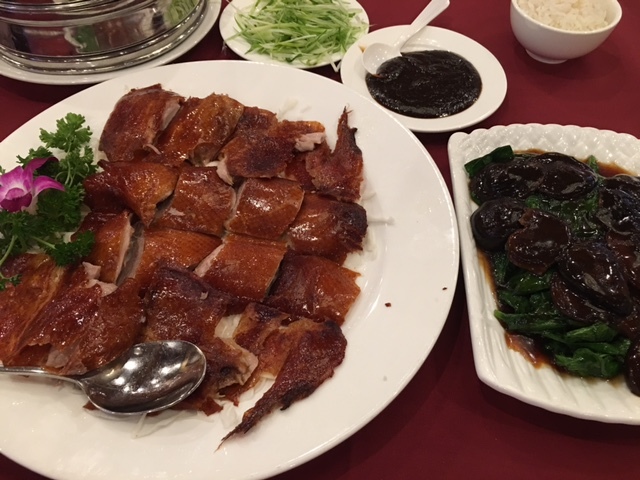 Lookey here, ya’ll, I have a spleen to vent.

This place called Escalante’s, how does it get so much love in this town?

I went again today at the request of a friend having a bad day, so I couldn’t argue.

The salsa is crushed tomatoes with…nothing else. No spice or onion or flavor.

The flautas and enchiladas are made with FLOUR TORTILLAS. Look around Mr and Mrs Escalante, see anyone else doing this? Few of them are, and for a good reason.

There is always a couple of fish specials, today it was snapper. I didn’t order it because it is always, without exception, grilled to a dry cardboard consistency.

I don’t get it, I really don’t. With all the Tex-Mex around, I don’t see why this place seems to flourish.

The margaritas are pretty good, maybe that’s it.

A lunch is a terrible thing to waste.

Chances are at the same time I was eating a beef and a chicken enchilada made with ACTUAL corn tortillas at El Gallo on Gessner. (Actual is a word I rarely use as I consider it superfluous but it’s justified here.)

El Gallo is a neighborhood place that serves old school Tex-Mex, nothing earth shattering, but it’s been there over 40 years.

I’m curious about the price of the snapper special. Too inexpensive and I suspect cardboard sheep head or cardboard tilapia.

Assuming this was Monday, we were talking about it also.

I was meeting someone in the T&C area and suggested Guadalajara , “You know, across from Barnes & Noble”. When I was reminded that it was no longer Guadalajara, but Escalante, we agreed it was worth the drive to go to Guadalajara after all.

BTW, I had the Cream of Poblano Soup. It had lots of “stuff” in it, (chicken, corn, etc.) but could have been a bit creamier.

It is! But this time we are all on the same page!

I had that poblano soup at the Guadalajara in The Woodlands back when we were doing the poblano soup themed month. I remember it being very good. I always forget Guad on I-10, next time I will divert all Escalante efforts there.

I had a Lopez craving while on the SW Frwy last week and ordered the tortilla soup. It was delicious. Tortillas, cheese and avocado served on the side. I dumped them all in. 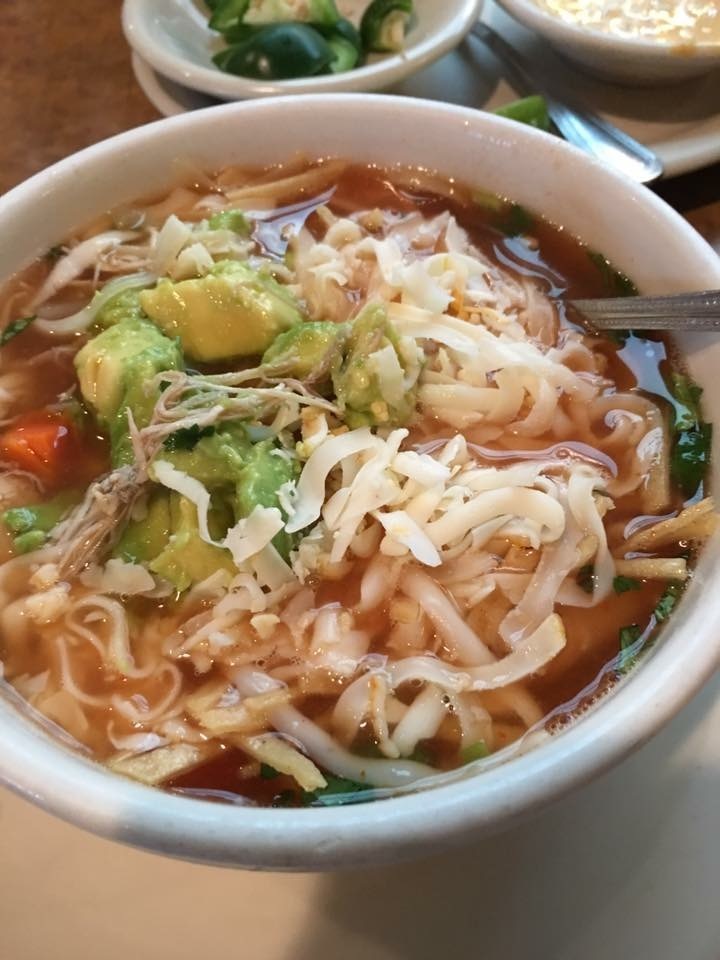 Boy does that duck at Fung’s kitchen look great. Would anybody be up for a dim sum meetup sometime in April?