Hannaford had no more of the whole chickens on sale.

So several BISO chickie boobies stood in quite nicely.

Rice pilaf and sauteed green beans, red and orange bell peppers, and onions, tossed with Penzeys’ Tuscan Sunset, adding both salt and Aleppo pepper since they’ve removed it from their blend. 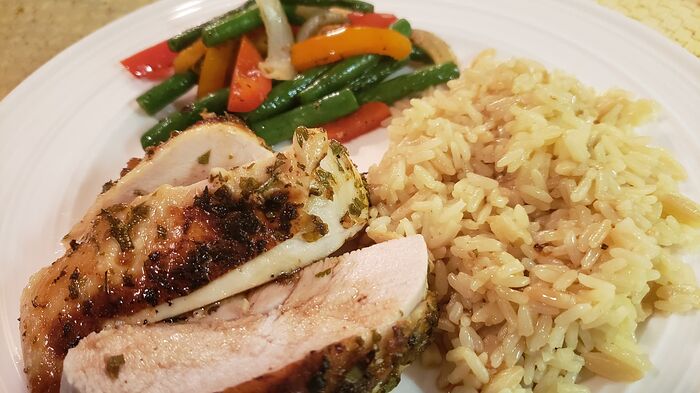 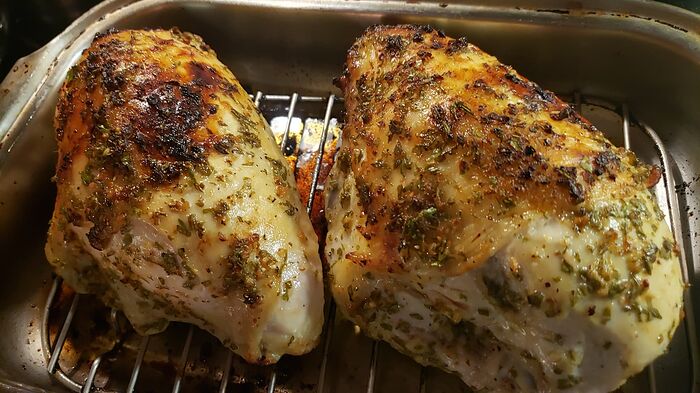 Oh, and for your “viewing pleasure”, some extra extra EXTRA large bulk carrots that Market Basket was selling. I was picking out some nice small Brussels sprouts and I realized these monsters were right next to them. I stood staring at them and immediately became a 12yo boy and started giggling. A woman reached for one of them and said “One of these can feed two people!” I replied “Yeah, I’ll BET!” And the two of us dissolved into even more laughter.

She made me buy them. That’s my story and I’m sticking to it. 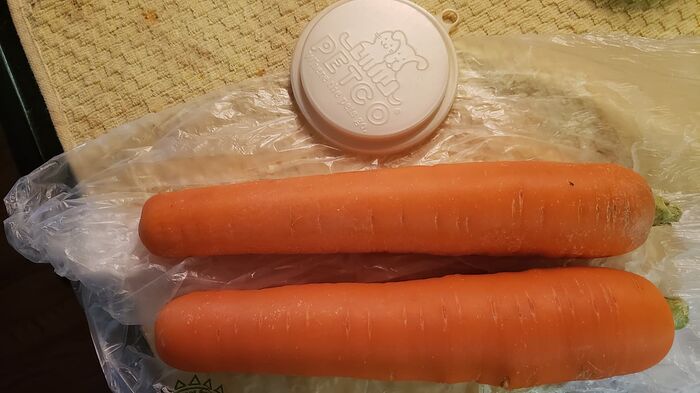 I call them “horse carrots” LOL

FWIW, I believe those are Nantes type carrots, a French heirloom.

Thanks, I just looked them up. Haven’t heard of them before. Surprising to see them in Market Basket. Looking forward to trying them!

“ Ferrovia, Thornhill “ - Bravo!.....for managing to stay afloat, through rain or shine, for over 2 decades and for keeping up with the same high food standard! Ontario

To some of you long standing Toronto [IMG_0052] [IMG_0053] [IMG_0054] [IMG_0056] foodie members, myself included. The mentioning of the names like Galileo, Herbs, JOV Bistro, JK Wine bar, Perigee, Truffles….etc will for sure bring back some culinary nostalgia and fond memories. At that time, their talented chefs and kitchen created some of the most memorable and delicious food in town, which in turn created some of the hottest and hard-to-come-by tables. Sadly, none of these ‘Culinary Super…

Yes . I pick out the big ones to feed the horse next door . The truth. Going on five years carrot time is 4 pm . Yes she is waiting .

We enjoyed another fabulous dinner at Cafe Panache in Ramsey, NJ including seafood squid ink pasta with lobster, shrimp, and mussels; lobster bisque soup with PEI mussels; panko crusted halibut over forbidden rice, with a wasabi sake sauce; pumpkin capellacci with brown butter and sage sauce; and pecan caramel ice cream for dessert. It all went great with an excellent Chateauneuf Du Pape and cabernet/shiraz blend. 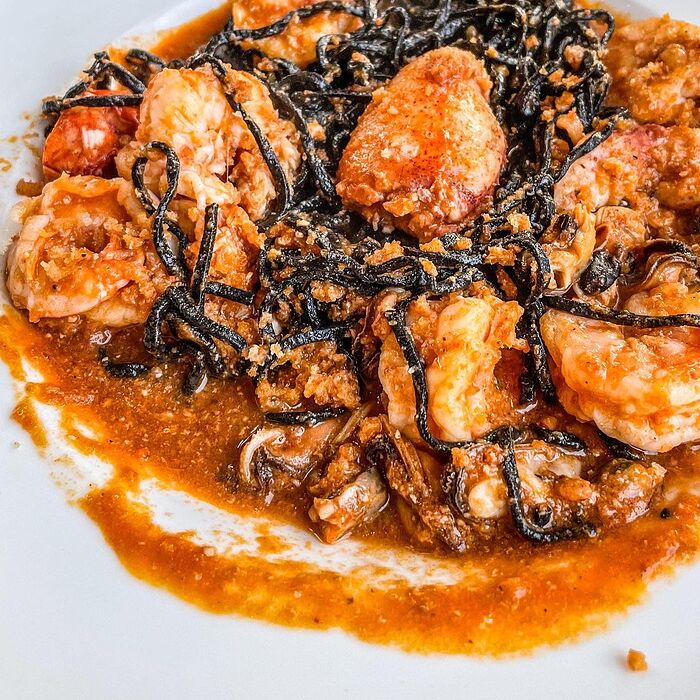 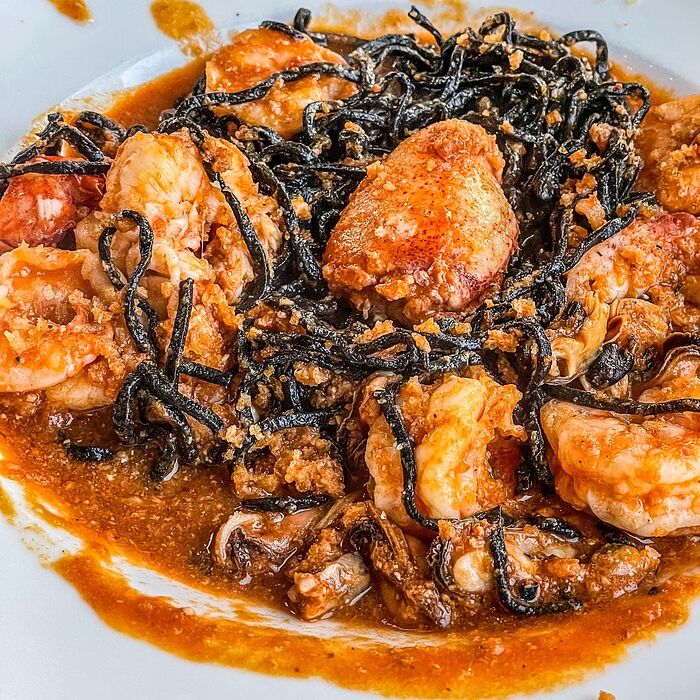 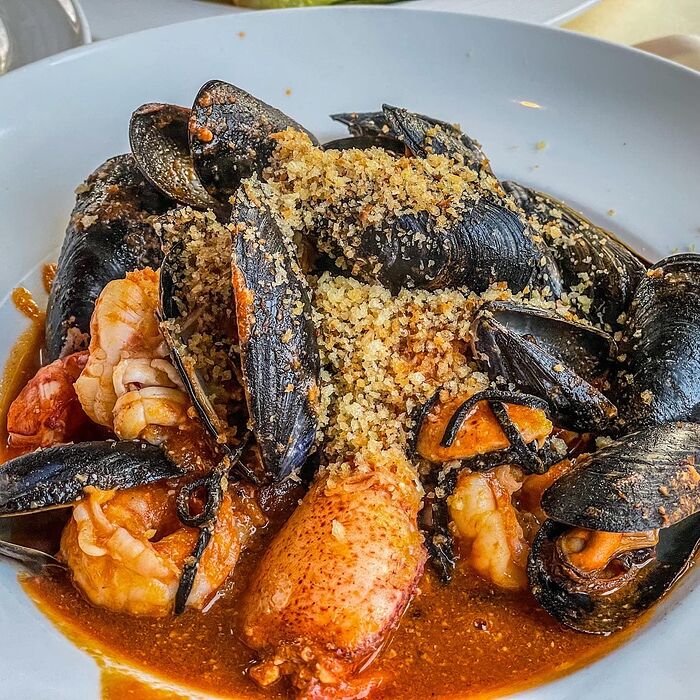 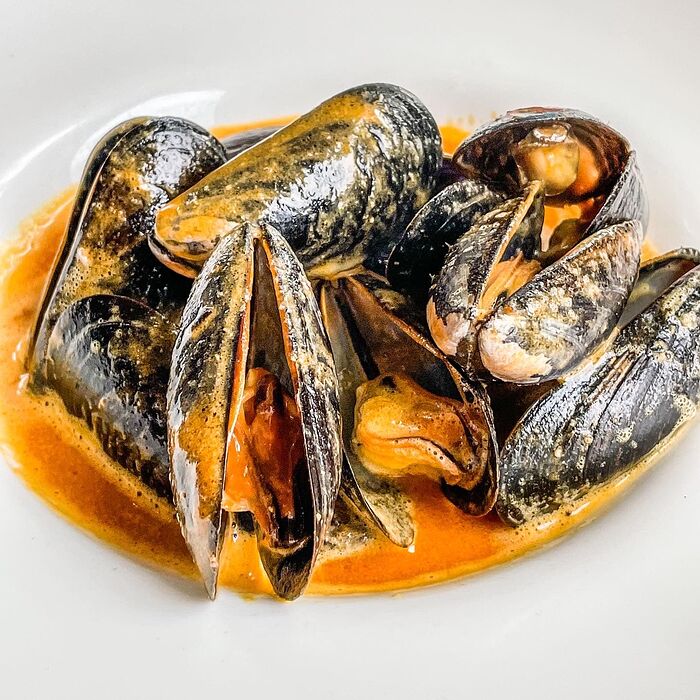 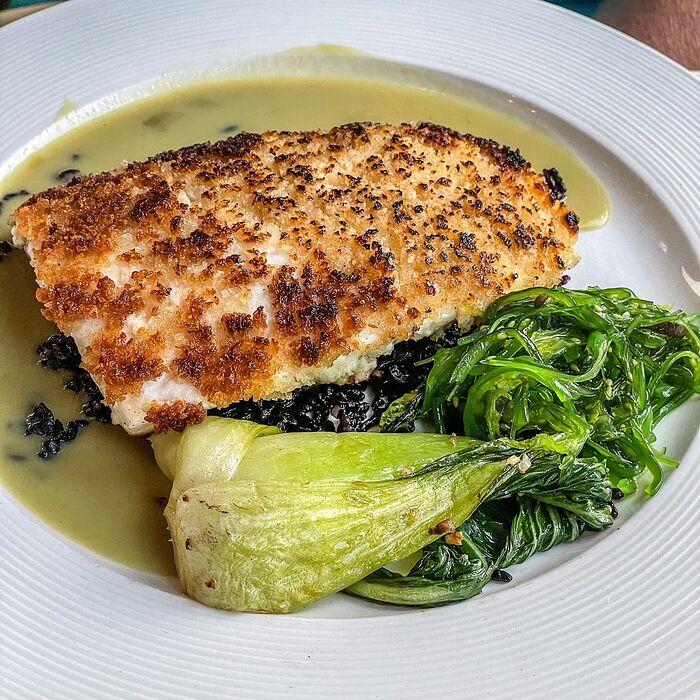 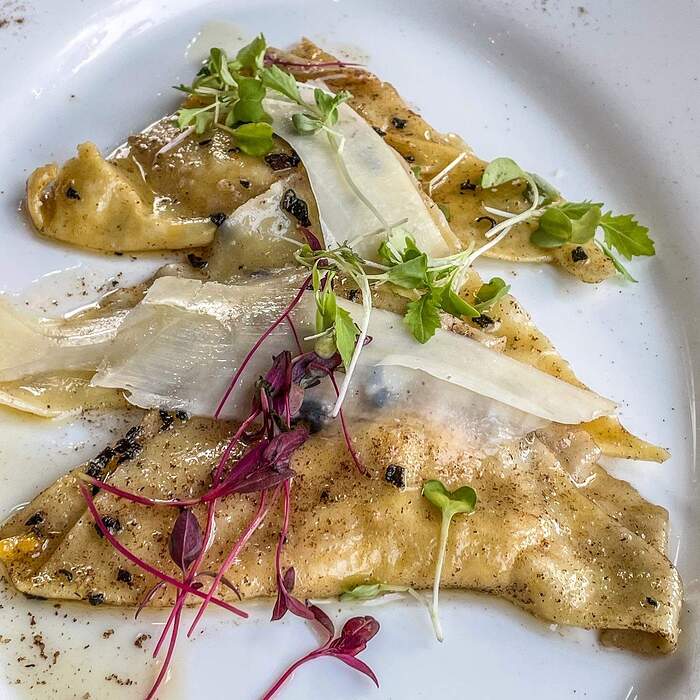 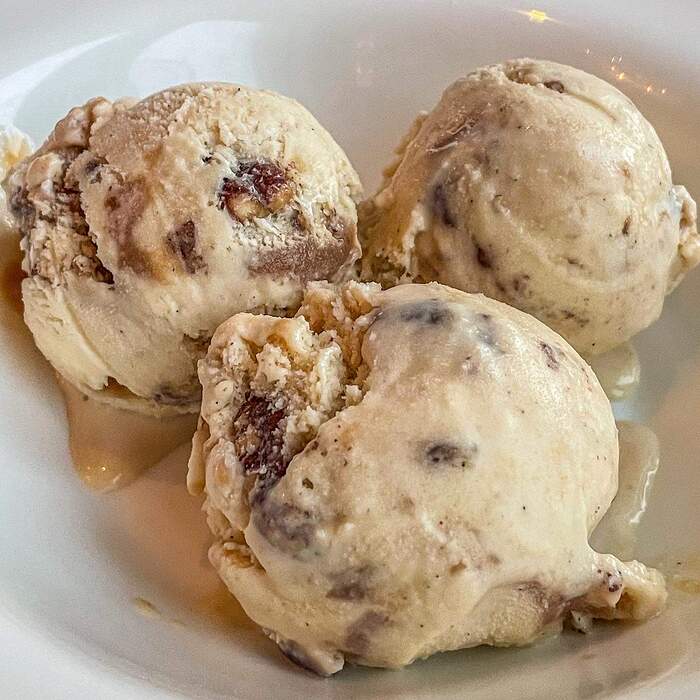 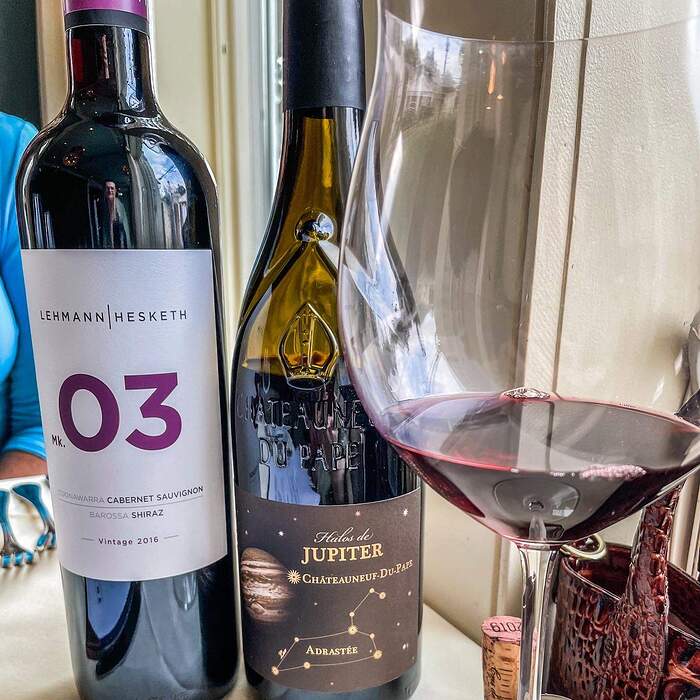 Tonight: Pan-fried mushroom and vegetable noodles. First time making this at home, quite easy and very tasty. (Also enabled me to cook the rest of the Chinatown vegetables before they were unusable.) 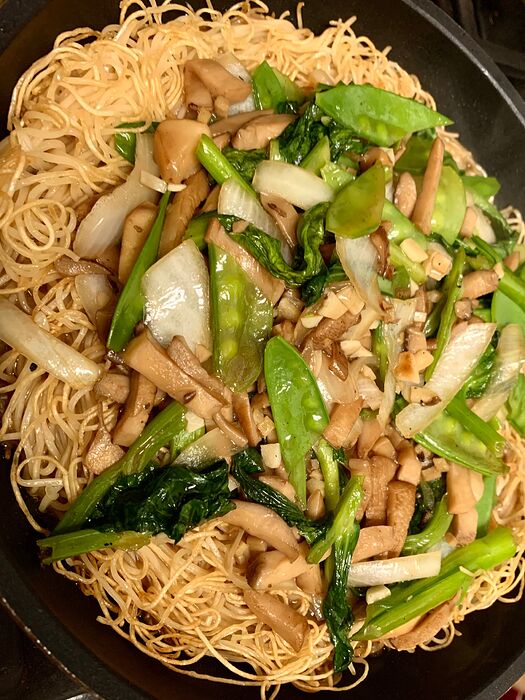 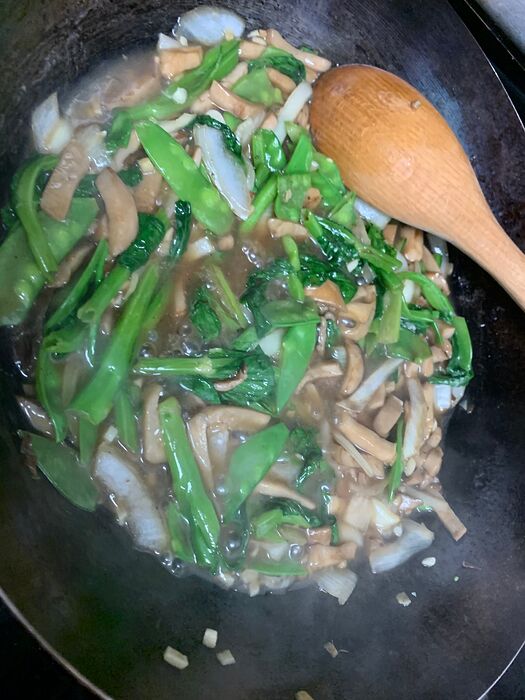 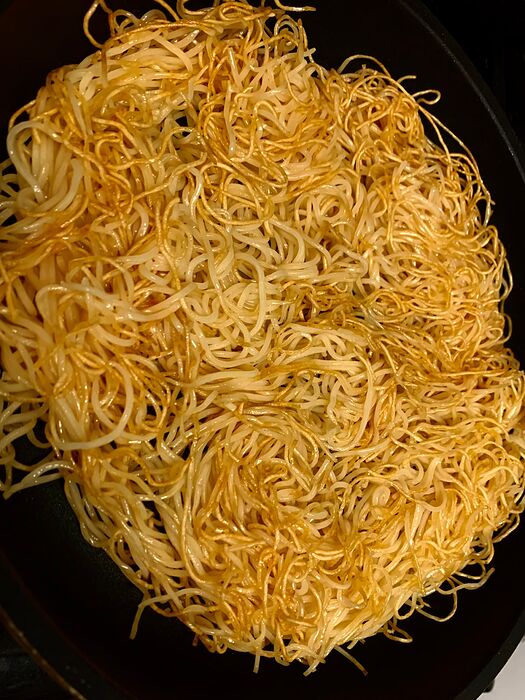 Last night: Indian food at a friend’s place, he had it cooked to spec by a restaurant chef near his office. Kababs - chicken seekh, tandoori legs, salmon. Main course was goat korma with naan and caramelized basmati rice. The korma was especially good. 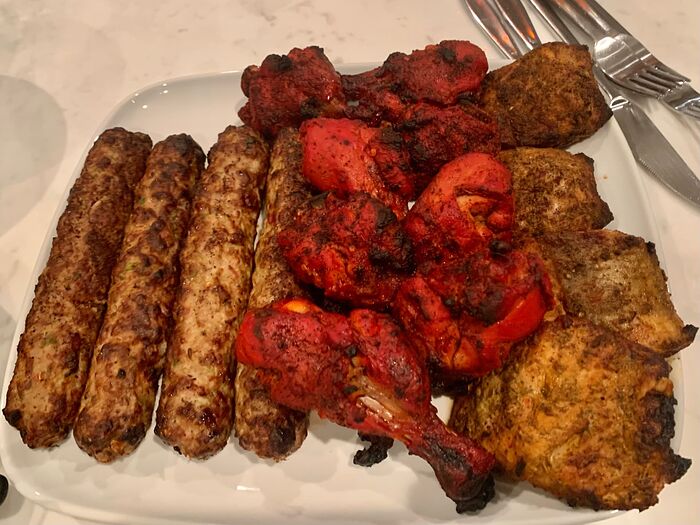 Night before: Banh mi and cha gio courtesy takeout before I got on the train home after a quick trip to Boston. 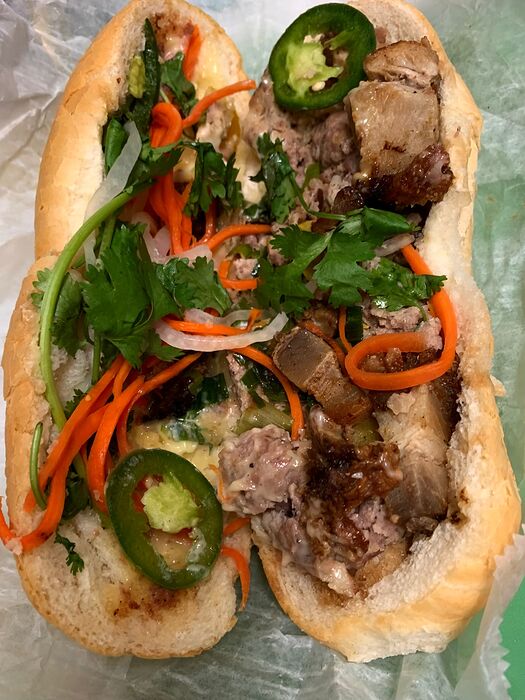 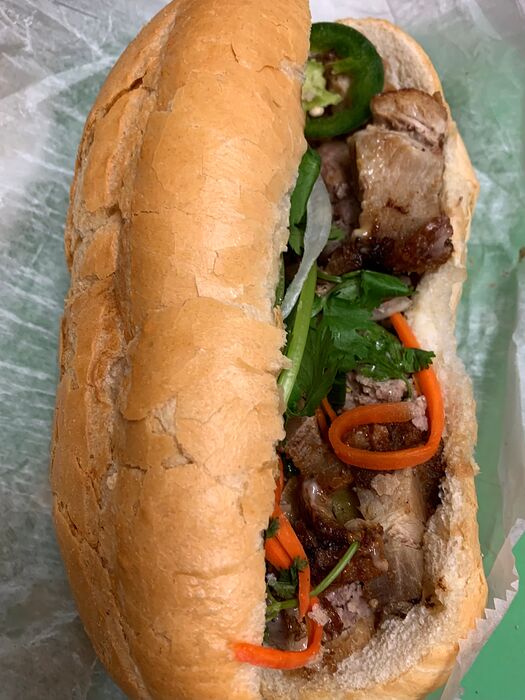 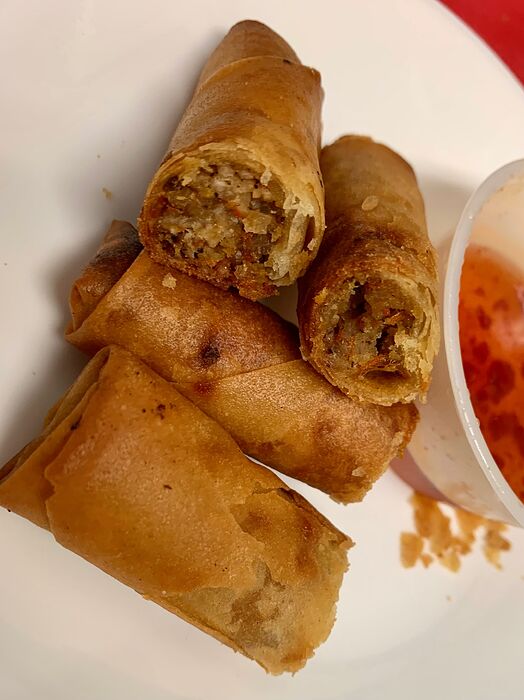 Tsukune meatballs roasted in the oven, made mostly from chicken, with some pork and a little zucchini. Marinated cucumber salad. Roasted green beans. Steamed rice.

Zuccs, scallions, beans and cukes from the garden. 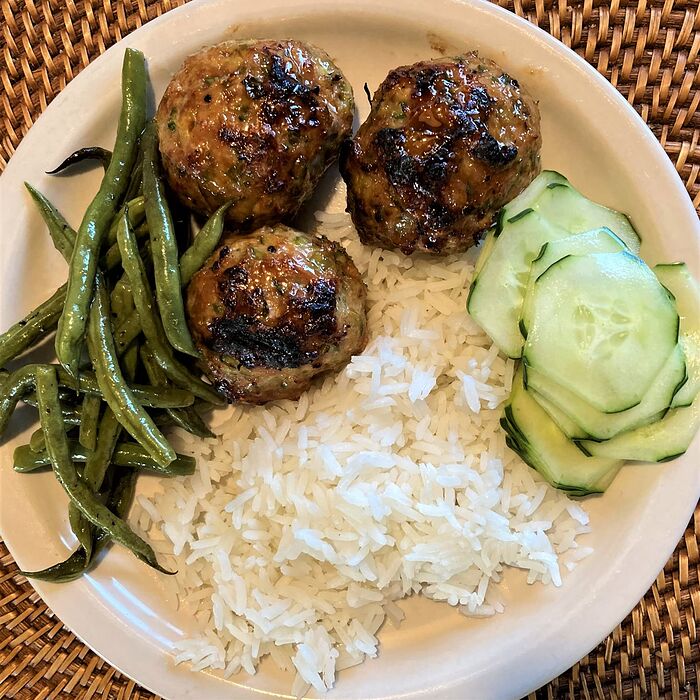 I’m going to guess a kind of ham . . Green onion . Broth . Tell me how to make it . that looks like a dark oyster sauce. thin mushroom. I’m not sure
Strike 3 …

Pan-fried mushroom and vegetable noodles. First time making this at home, quite easy and very tasty.

What recipe did you use, if you can share? Thanks.

It looks really good and I also have ingredients I need to use up.

Tonight’s dinner was pork meatballs over egg noodles. I was going to pour some brown gravy over top as a sauce, but my girlfriend wanted chicken fried steak gravy. 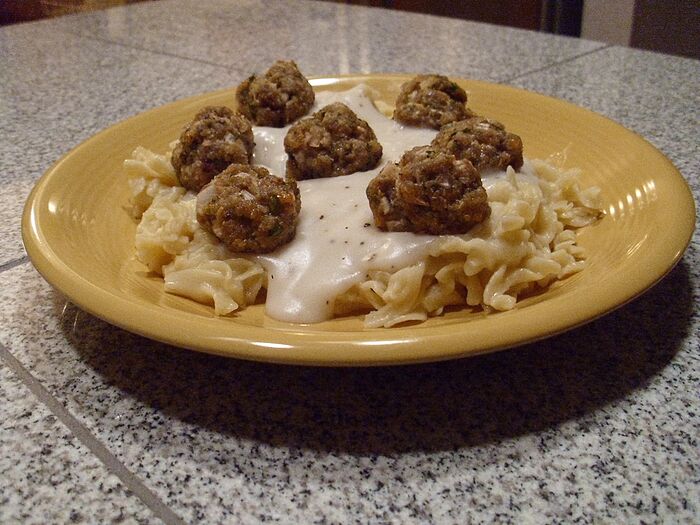 Pan-fry noodles: Oil in wok or non stick pan, flatten noodles, crisp on one side, turn and crisp the other side.

Underneath all that Pecorino is one of my hybrid Italian meals. It’s not Piccata because there’s no capers and it’s not Murphy without sausage. So we have what is essentially Chicken Scallopini in a white wine sauce with onions, mushrooms, potatoes, and hot cherry peppers over linguine. Three different meals in one. Any meal that combines potatoes and pasta is okay in my book. 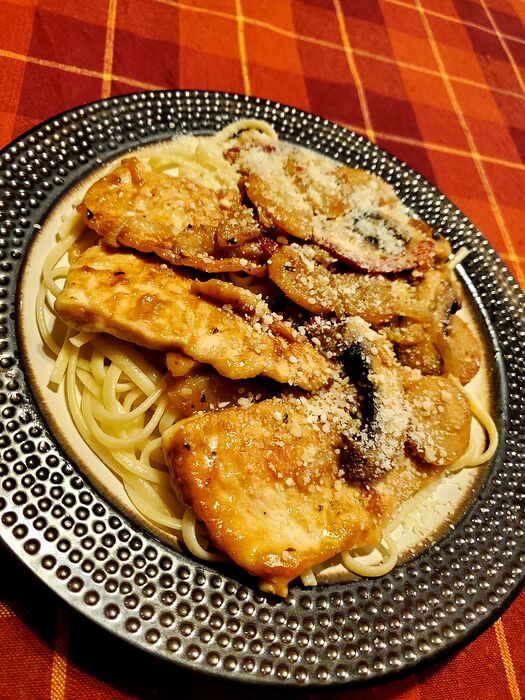 7 and 7 to drink. Kirkland Canadian whiskey in place of Seagram’s.

Not very photogenic brown blob but very tasty Japanese beef curry - cooked cubed beef chuck in a pressure cooker in a mixture of caramelized onions, garlic, ginger, garam masala, carrots, apple, bay leaf and beef broth for 25 minutes. Released pressure, added sweet potato and shiitake mushrooms and cooked another 5 minutes under high pressure. Released pressure again and simmered some mustard greens in the mixture. During the simmering you make a quick roux from flour, garam masala, ketchup, soy sauce, Worcestershire sauce and some beef broth and added it to the curry to thicken. Served over rice. 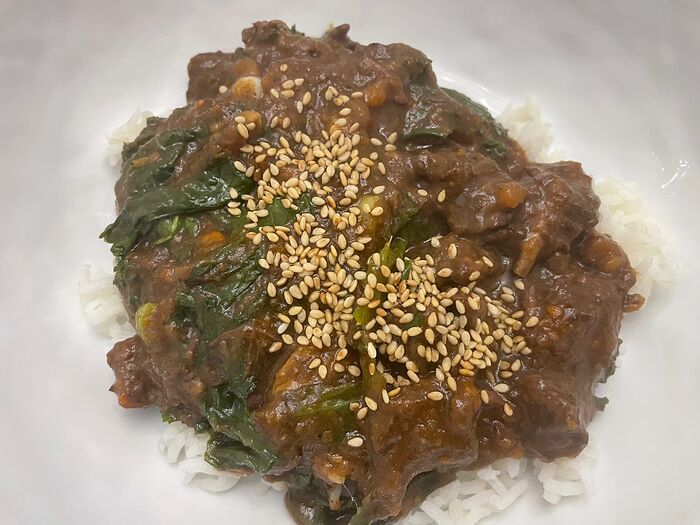 Thank you.
That’s pretty much how I make it, only yours looks prettier because I mix mine up before serving.

Brothy orzo with chicken, lemon, feta, and fennel. Roasted green beans too! The orzo was inspired by both Nigella and Ottolenghi. Copious leftovers for the next couple nights. 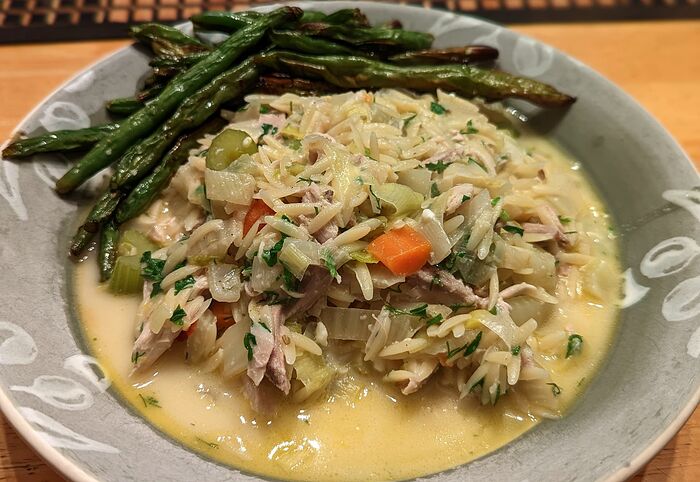