I’m in a period of making “trendy” dishes lately. Last week it was baked feta/tomato/chickpea and last night was the Ina Garten mustard-roasted fish. Inspired by @GretchenS’ sub of the creme fraiche with Greek yogurt and mayo, I used the yogurt mixed with a container of tartar sauce that we have a ton of in the fridge (our local fish place always gives us a boatload of them in our takeout orders, even though we specify “no tartar sauce”). It worked! I slathered a big slab of wild Coho salmon with it and scattered some parsley over because it looked too beige to me and B loved it. A simple and refreshing local farm salad of Boston lettuce, tomatoes, cukes, green beans, onion to start and a side of sautéed broccolini with crushed red chili pepper, garlic, and chickpeas. Already looking forward to the leftovers for tonight. 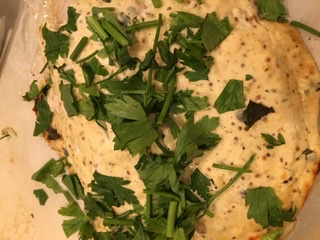 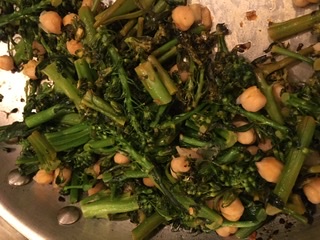 I too, will have to wait for solo dining.

I’m sorry to hear this. We, luckily, all love eggplant and I cook it often.

My sister and I are leaving for Chicago in the a.m.,

Have a WONDERFUL time! Can’t wait to see where you and Sis enjoy Chicago’s food and drink!

We pushed grandpa a little out of his comfort zone last night with cochinita pibil, black beans, Spanish rice, and onion-jalapeno pickles. Tortillas. He has told us in the past he doesn’t like Mexican food, but when I’ve read between the lines, I think he means he doesn’t like Tex-Mex where beans, cheese, salsa, guac, s.c., are glopped onto everything in large proportion. No pix this time.

Did he enjoy it?

Whenever I was alone, though, I went all out on the eggplant front

This line immediately reminded me of a delightful book of food essays from many years ago titled “Alone in the Kitchen with an Eggplant” after a Laurie Colwin essay. I wonder if MC took inspiration from there.

Actually that title essay is available on the amazon kindle book preview (though the other essays are excellent - there’s a funny one on asparagus, among other things): 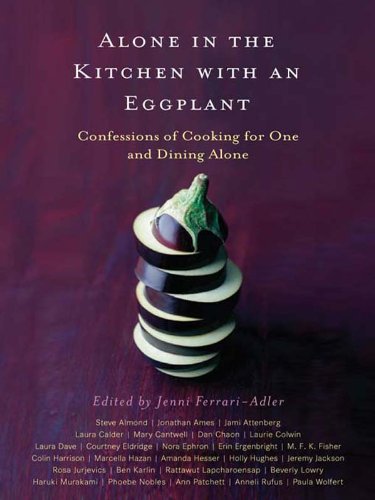 Alone in the Kitchen with an Eggplant: Confessions of Cooking for One and Dining...

Alone in the Kitchen with an Eggplant: Confessions of Cooking for One and Dining Alone - Kindle edition by Ferrari-Adler, Jenni, Jenni Ferrari-Adler. Download it once and read it on your Kindle device, PC, phones or tablets. Use features like...

What did you think of it?

I made this and a few more things from My Kitchen Year a few years ago, but my recollection is that I might have enjoyed the writing more than the recipes (they were good, but nothing made it into rotation).

I enjoyed it quite a bit, and it is definitely in my rotation, but I didn’t exactly follow the recipe. I mostly looked at it to make sure I hadn’t left out anything major in the way I usually do it, and for the roasting temp and time. I haven’t added lemon before, which I did yesterday as fresh squeezed juice , I used dried, crushed chili

rather than fresh, sprinkled directly on the chicken, with salt, followed by olive oil, rather than making chili oil, and added some hopped garlic (DIL bought a huge jar! )

Ish. He loved the tortillas and pork. He ate a bit of the pickles and rice. And avoided the beans like the plague

But I did get him to explain a bit (he is pretty scarce with his words) that he doesn’t have anything against beans, but that mex type beans were just everpresent whenever he tried the cuisine and he didn’t want it. And kind of resented it. What can I do? You can’t teach an old dog new tricks? Anyway, I guess I consider it a win that he ate and liked some of it. And I made up for my transgression by making a nectarine marzipan cake for dessert

I had an exhausting day, and thought I was tired enough to skip dinner, so I ate a banana and put my feet up.

Well, that revived me.

So I took out defrosted chicken thighs that needed cooking and decided to poach them Chinese white-cut style.

Scallion-ginger-garlic sauce while rice cooked in the resulting chicken broth.

Sorta Hainanese chicken & rice then? Whatever it was, it was delicious and simple. (Even plain boiled spinach tasted good with the scallion sorcery.)

crabs using the new concord steamer from amazon for the first time
I was to able to convince concord to sell me two extra steaming tiers so, I have 4 now , but 3 tiers was enough to steam 6 dozen crabs. picture showed them being loaded up to steam but forgot to take picture after it was cooked
The SS is really nice and heavy and the handle stayed cool thruout steaming
Now, do not have to use the heavy outdoor unit that needs propane to heat. 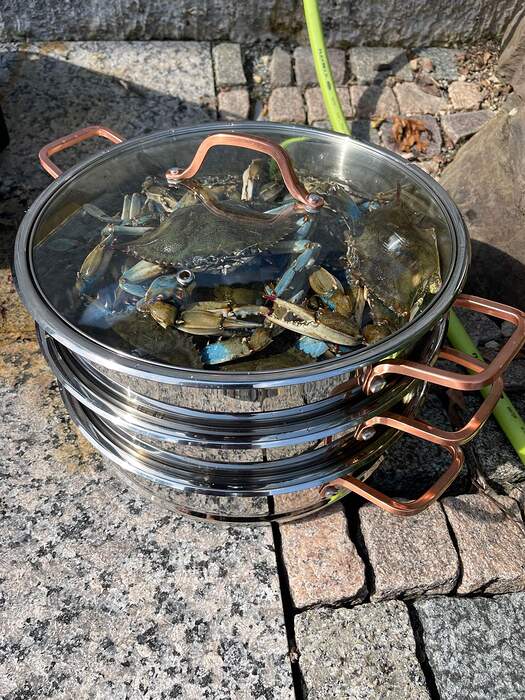 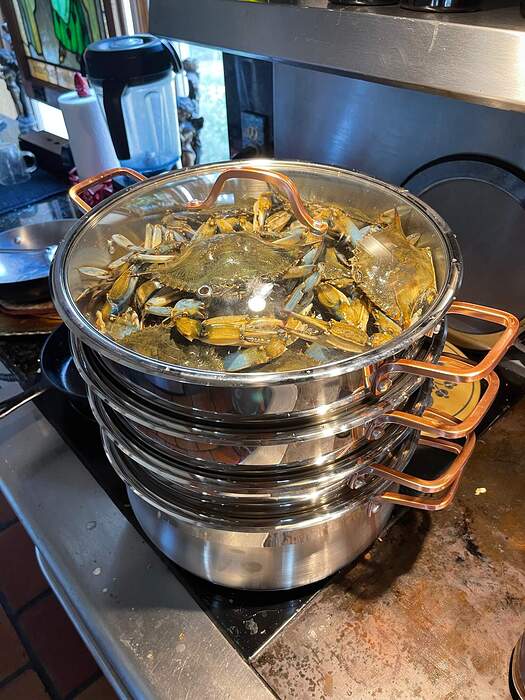 Super lazy but tasty dinner: a slice of green olive-hot cherry pepper bakery bread with butter and prosciutto and with black label Cambozola (me neither but it was fabulous) and some slices of slightly overripe but still good local peach. Not pictured: G&T. 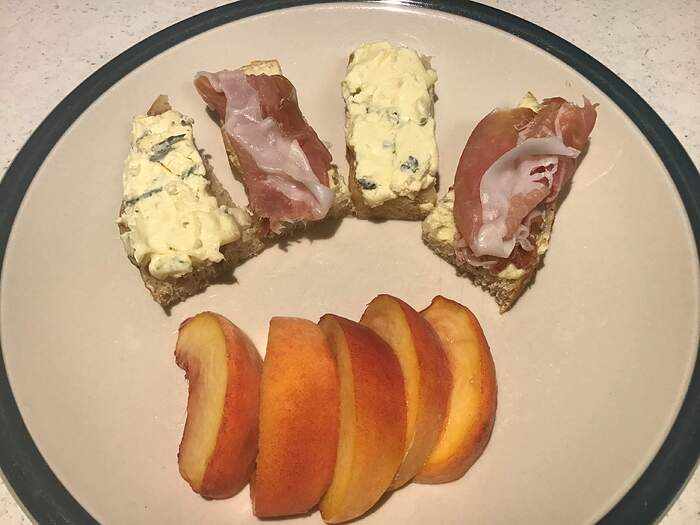 I started with this NYT recipe for shrimp and coconut rice as inspo and took my cue from the comments to spice things up: https://cooking.nytimes.com/recipes/1022459-coconut-rice-with-shrimp-and-corn

(the embed link button in the formatting menu seems to have hidden/changed? Can’t find it @naf )

I made the coconut rice with sauteed shallot, garlic, good chicken broth, and separated coconut milk with some of the cream stirred in. When it was done we stirred in half the remaining coconut cream and 1/4 c. toasted coconut flake. I steeped the naked cobs in the broth before cooking the rice but don’t know if that really did much.

For the corn, I sauteed it with red onion, minced ginger, and butter and set aside. Then I sauteed garlic, scallion, and minced jalapeño in oil and seared the shrimp, which I seasoned well with s&p. Added some butter, Thai mountain sauce, soy sauce, kecap manis, and chili-garlic sauce. Topped the rice with the corn, then the shrimp, and garnished with cilantro, toasted coconut, and lime juice. Made a mess in the kitchen but worth it. Haricots and tomatoes alongside. 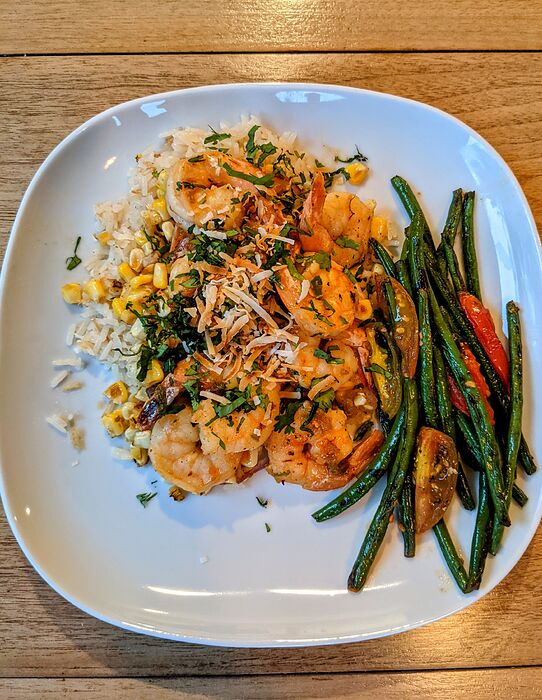 Using up what’s in the fridge.

The noodles are darker than usual because I used the juices from cooking the Kalbi sous vide the other day. 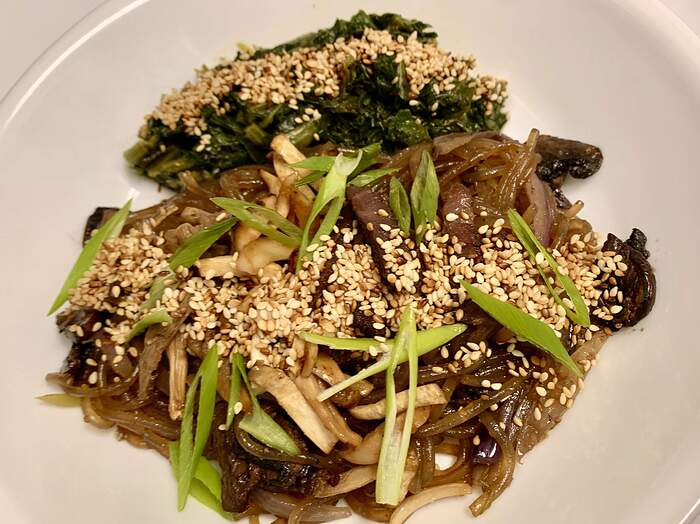 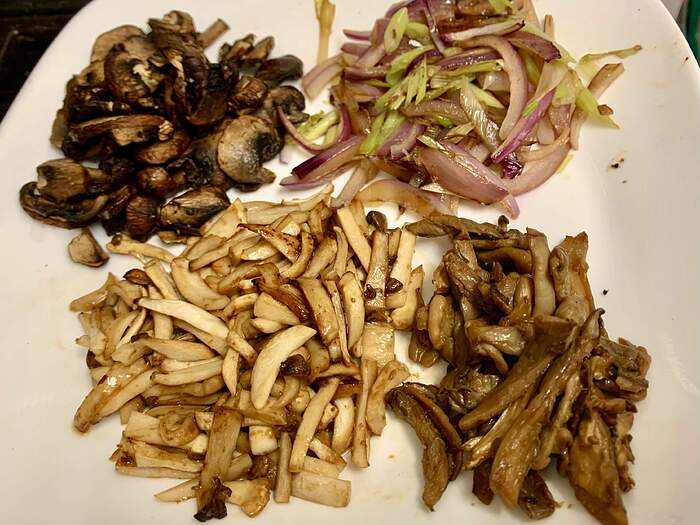 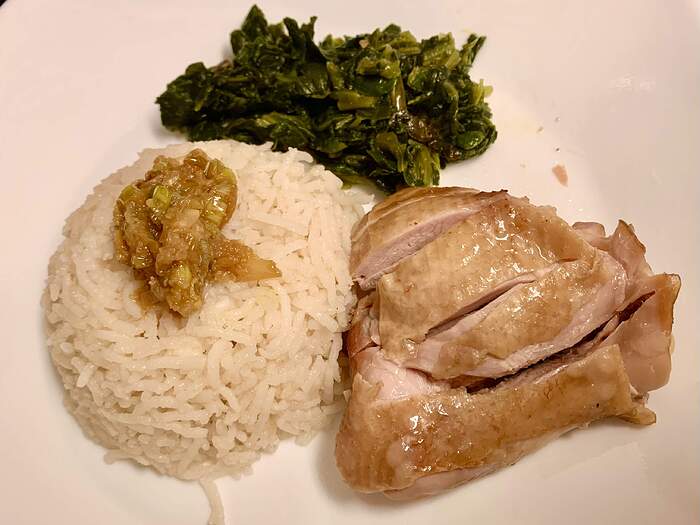 Third day of fridge stew . My 24 month aged Parma I ordered from Italy along with the pecorino will be here Friday. I already have the dried pasta that I ordered . I have watched so many Italian language cooking videos from the Italia Squista website on you tube . So I’m starting with Cacio e pepe . Then Carbonara . And then ?? CHEERS 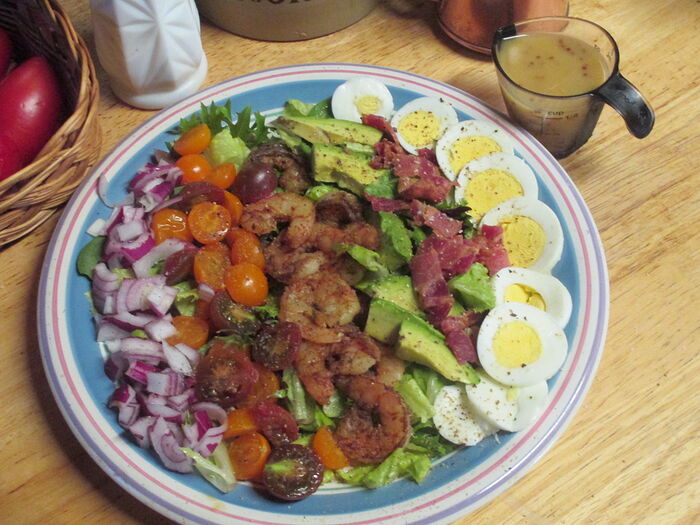 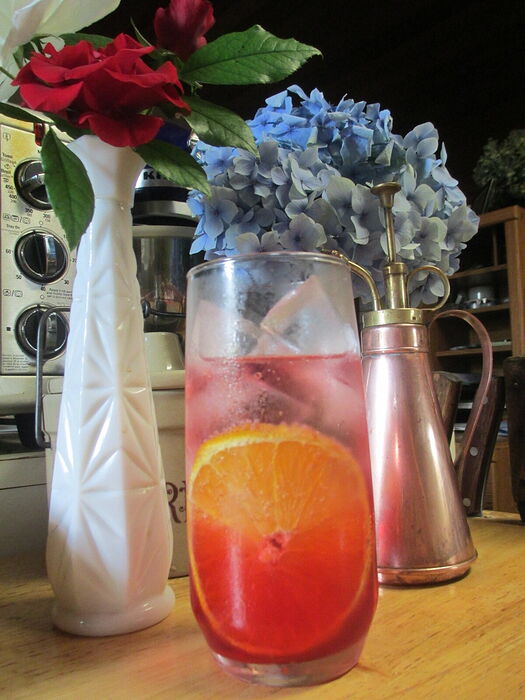