X totally on both your thoughts.

I was underwhelmed by tonight’s pineapple chicken from the NYT. It seemed like a mish-mash with no clear identity. And a short 8-min marinade still made the meat tough. I added Sriracha after the photo. DH made a simple slaw with cumin, vinegar, and olive oil. The Mexirice with beans I cooked in the microwave took FOREVER (like 35-40 min.) despite claiming to be “15 minute” brown rice. Didn’t bother with a pic, I was so annoyed. Waaaah. 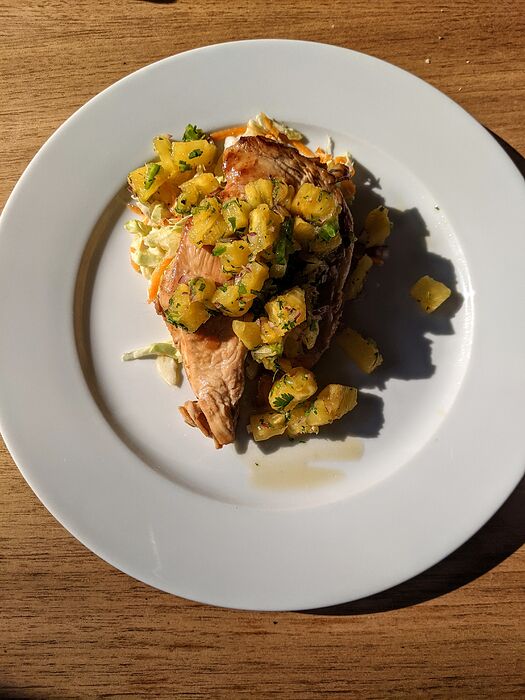 Filipino night, chez nous. Longsilog - longanisa (longganisa hamonado - or sweet Filipino sausage), with garlic fried rice and an egg, plus a mango/tomato/red onion salad on the side, with a nuoc cham-like dressing.

really good! The longanisa I’ve had before was much more garlicky than this one. I’d try the not-sweet version next time, though I really liked it.

But that garlic rice - how have I never had this before? just like fried rice, with sliced, fried garlic that gets tossed over and over with the rice, frying in oil. i used fresh and also some of my H Mart pickled garlic, and added scallions and cilantro. 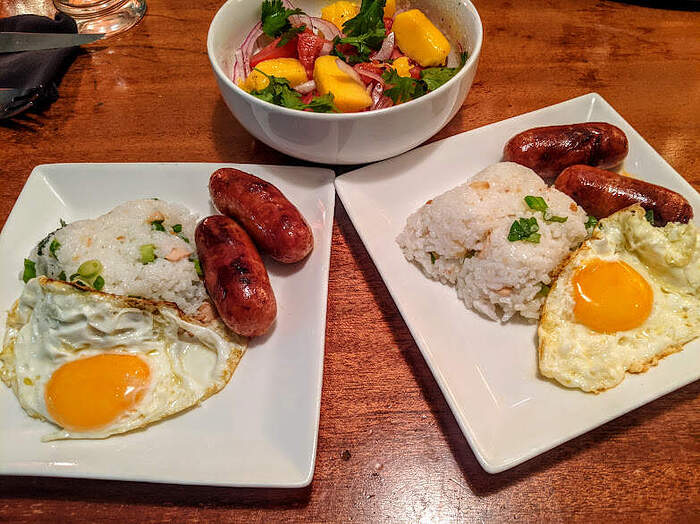 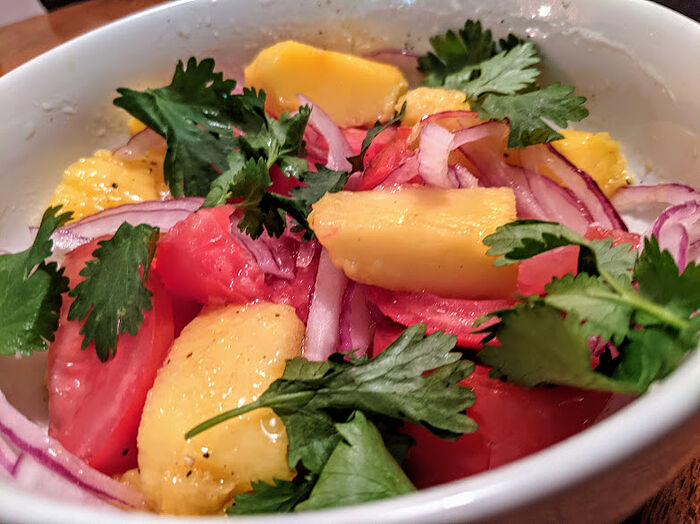 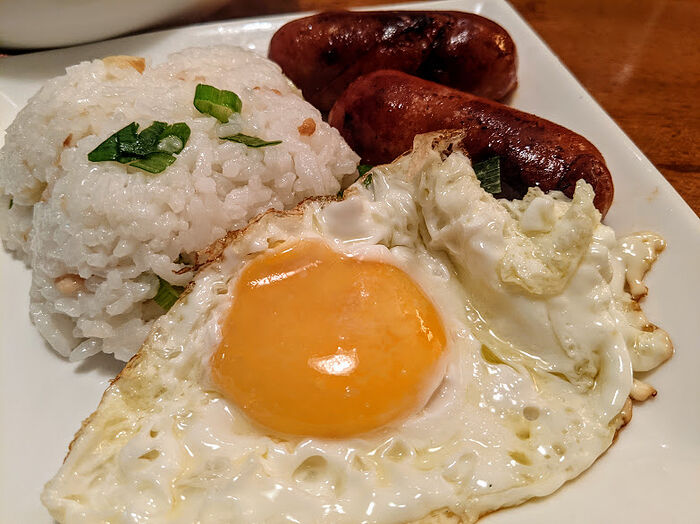 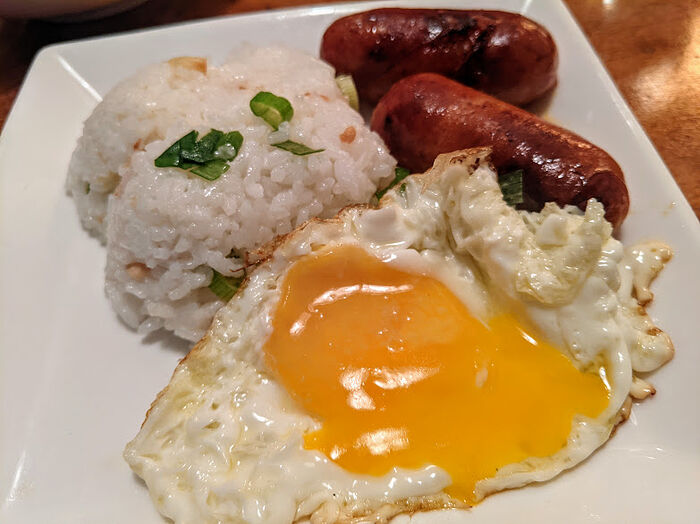 Yes, we liked it! Next time I’ll hold back on the slow cook time or cook under pressure. And add the lal mirch

sorry it didn’t turn out the way you wanted it! sounds like a recipe-written-wrong.

Absolutely AMAZING Amylu roasted garlic and Asiago chicken sausage that we picked up at Costco. A coworker recommended them and they are the best non-pork sausages I’ve ever had. We’ve been trying to cut down on pork and beef and these are a wonderful substitution. There was mustard and relish, though these were perfectly fine “naked”. Chips were kettle cooked horseradish cheddar. 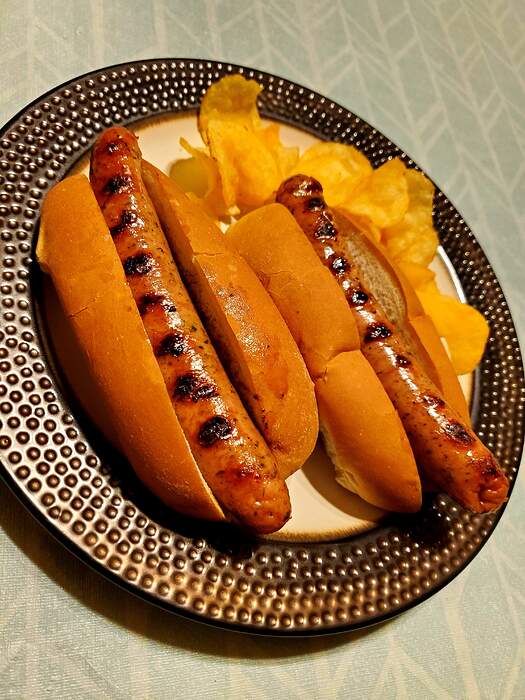 And now for tonight’s WTF moment:

We were having pre-dinner drinks in the garden. A beer for the BF and a martini and club soda for me (someone here on HO recommended this a while ago as a lighter alternative to drinking straight liquor on a warm summer night). 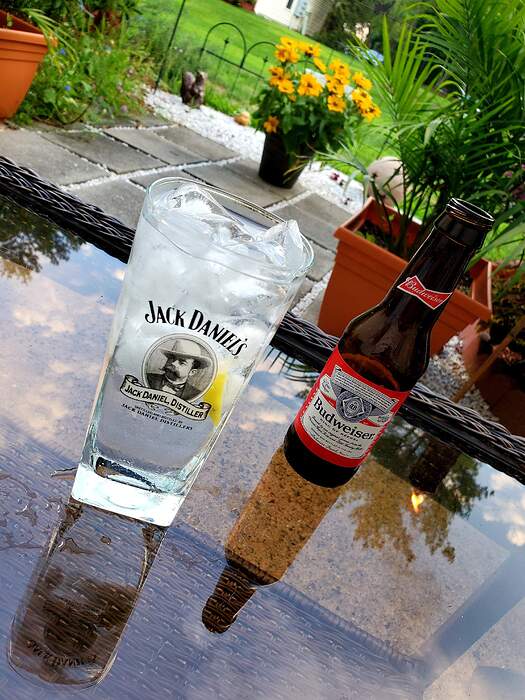 It was at this moment when I saw something that made me set down my drink, stand up, and announce “There’s a cat on the roof!” 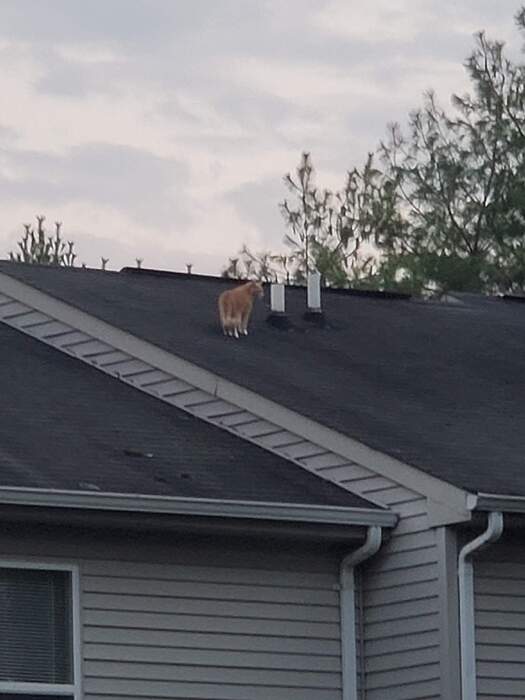 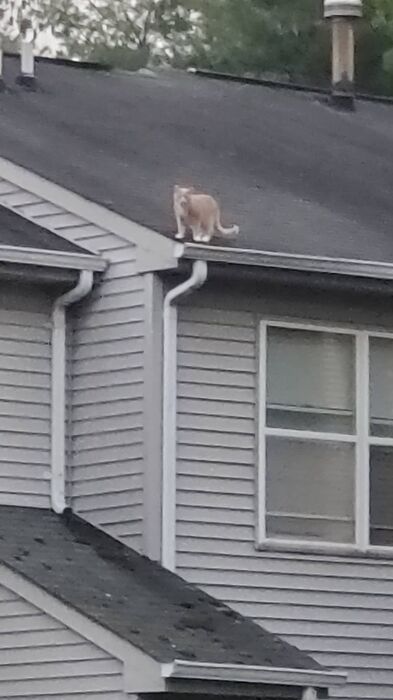 And so we sipped and watched the proceedings for several minutes before I decided to walk over to the house I thought the cat belonged to (I ended up being right) and informing them that their cat was on their roof.

We didn’t stay out much longer, but judging by the nonchalant and almost indifferent response by the owner, I imagine the cat made it down okay.

Roasted pork tenderloin with KC BBQ sauce. Roasted carrots, turnips from jr’s garden, shallots, garlic drizzled in oo , when done a drizzle of honey, a glob of butter and thyme and parsley.
Salad was sweet baby green with nectarine, plum from my garden, bleu cheese, pistachios and an oo and balsamic dressing. 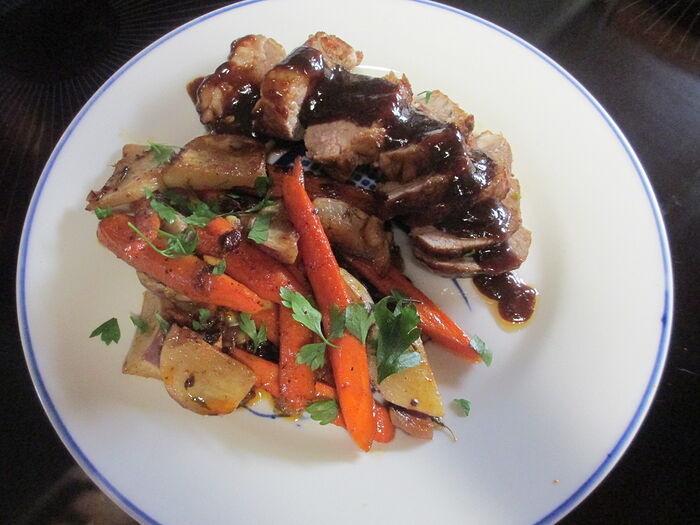 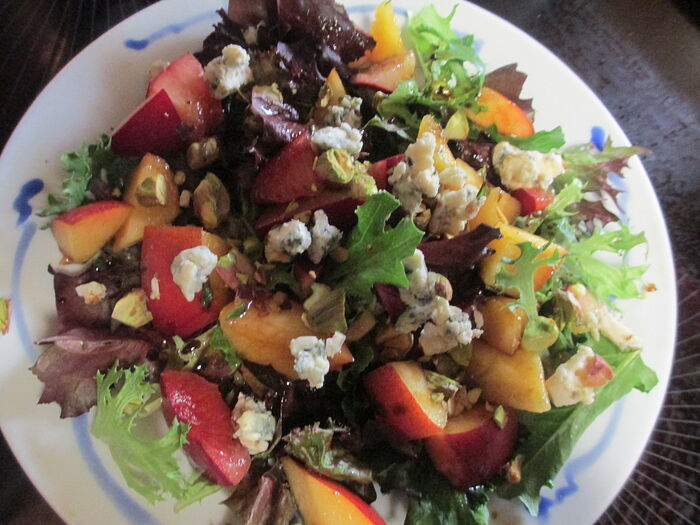 cute kitty! my sister’s cat only goes into the two-story house via the roof.

those sausages do look good…

Good read! Funny that the one cat is named Larry. About a decade ago, my family discussed getting a cat (our two cats from my early childhood–brothers-- had passed by then) and naming him Lawrence after one of my favorite Civil War generals, Joshua Lawrence Chamberlain. Anyway, my mom works at a park and a coworker told her that someone had dumped a cat there and they were keeping him in their office until he could be checked out by the ASPCA (or claimed, but he was apparently intentionally let go). Turns out, the park ranger who found him was named Larry and the staff had been calling the cat that ever since.

We ended up adopting him through proper procedure and a waiting period, but what a coincidence.

10 years later he has been quite the troublemaker and we now know why he was dumped!

There was this the other night: Lawrence has long been an escape artist. He’s never been an outdoor cat but he longs to be outside. Every once in a while, we would let him in the garden to wander around for a few minutes under supervision so he doesn’t run off. Now he howls like a banshee whenever we are outside, so we stopped letting him out there at all, hoping to curtail his outbursts. We shut the door so we can’t hear his incessant meowing. WELL, one night he learned how to LOCK THE DOOR WHILE WE WERE OUTSIDE. You can see him here tonight eying it up. So we now have to bring our house keys with us whenever we go out back in case he decides to get his revenge on us. 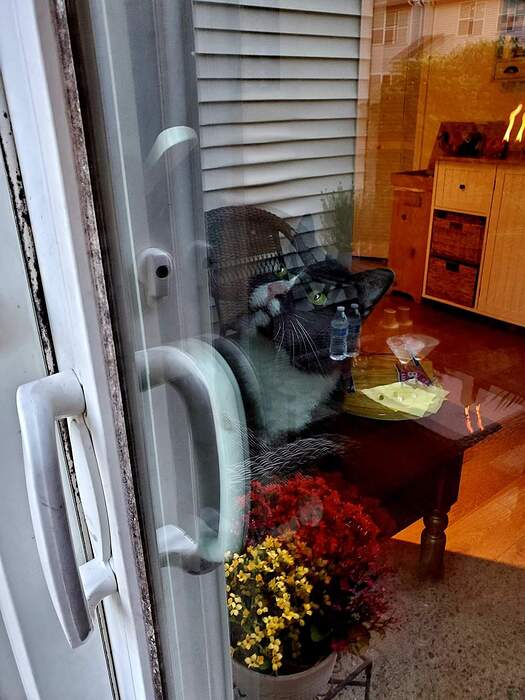 I love cheese burgers. I make them super thin . 2 oz of burger . Gently smashed thin . Then into the fridge on a sheet pan . Sometimes sauteed chopped onion in the patty , or on top sliced and sauteed. Kraft American to top or maybe a cheddar . On the cheapest hamburger bun available. No condiments or toppings of any kind added after except for those onions . Simply the best. Cheers🍷

totally agree. and a good cheeseburger and tots is a great fix for my mood when i’m feeling that way. Love a good burger, particularly in the summer fresh off the grill, having enjoyed a nice crisp glass of wine while tending to the grill.

A beer for the BF

Budweiser is not beer but an abomination… 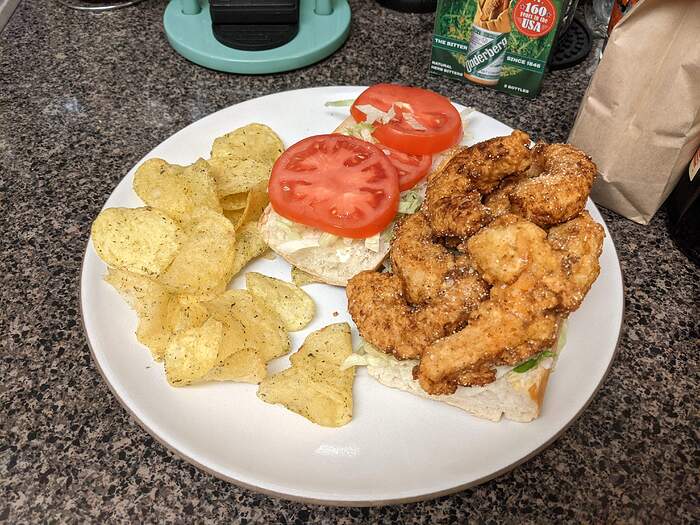 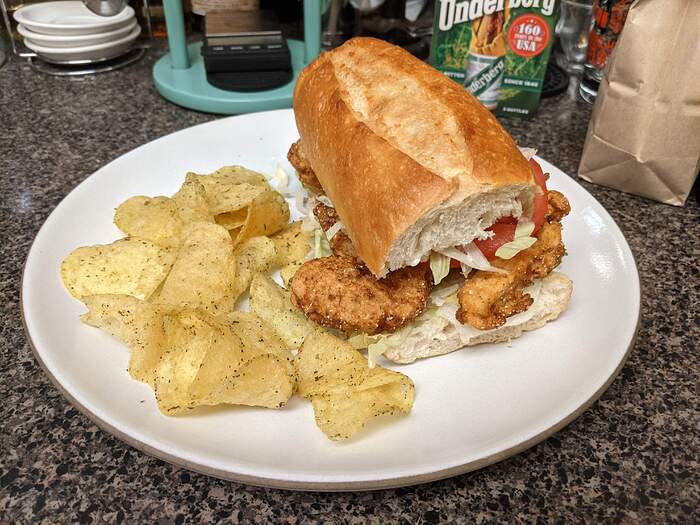 Friends have this mesh outdoor kitty playpen they put their cat in when they’re outdoors, so the cat can hang with them outside in a big enough space, but still be contained so he won’t run away…

Like all Spaniards at local bars & at home & at our families;

Dinner on Friday … Just some shellfish and swimmers of the northeastern Mediterranean. 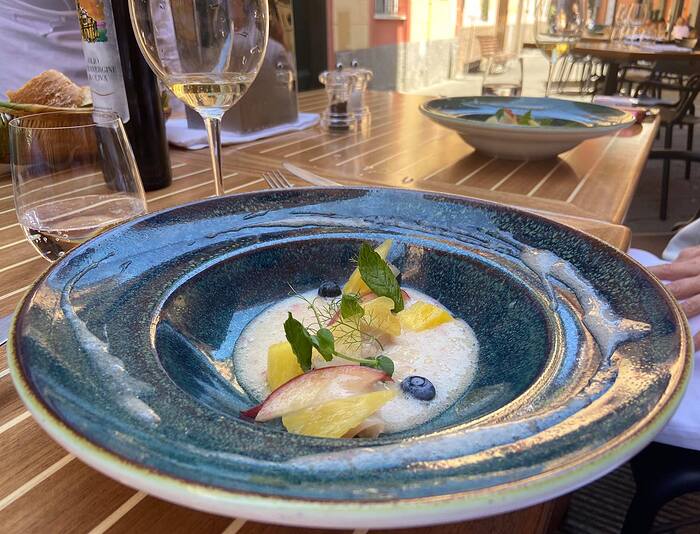 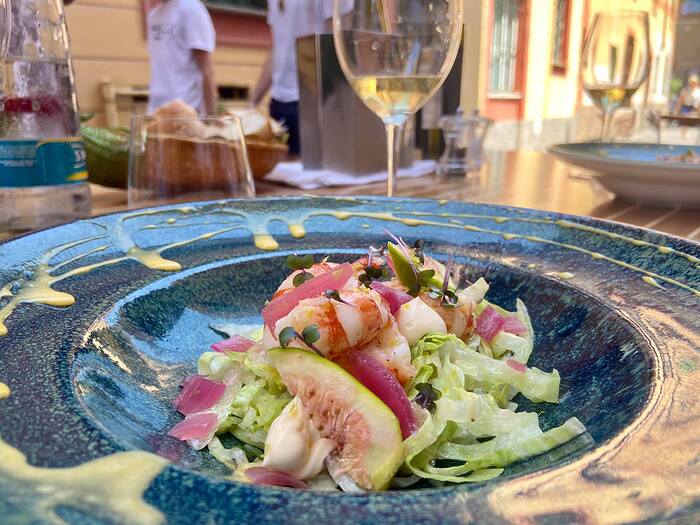 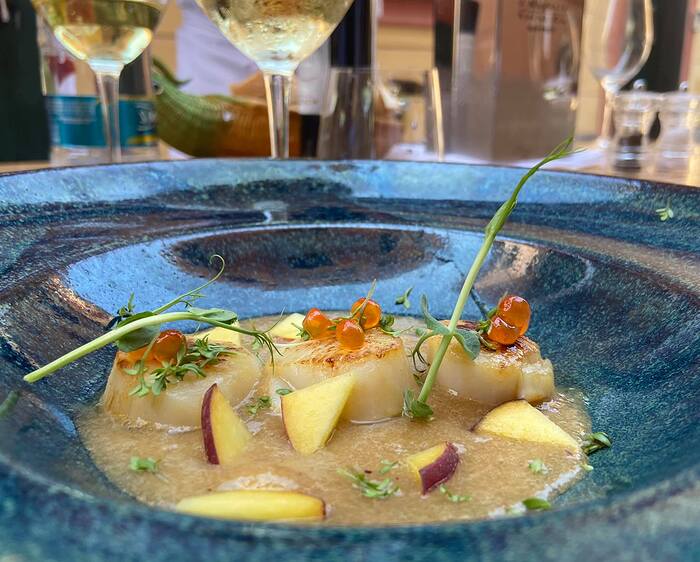 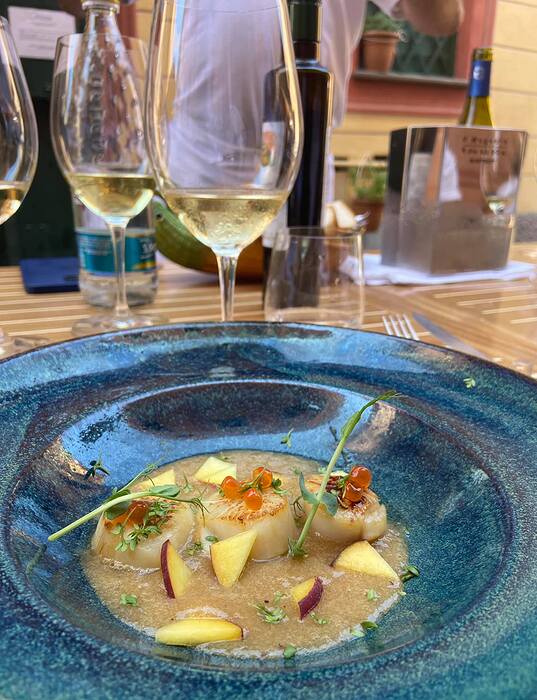 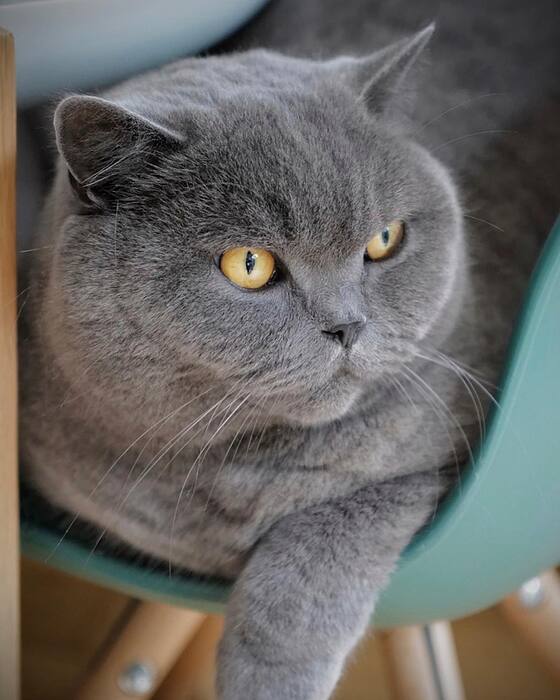 This British Blue was my parents´ 21 year old “Pierre” … He was quite an amazing fellow. My parents would walk him on a leash ! He was incredible. He loved going fishing with my grandfathers, dad and sons.

We said, “no more pets” … Very emotionally painful when Pierre passed on.

Have you ever tried walking him on a leash ?

BARÇA (pronounced bar - SA ) is the name of our Football team.

I see that it is a mistaken translation BARCO (BOAT IN ENGLISH) noted on the Upper left corner, with my husband´s chocolate photograph (logo) or avatar.