Tried a new pot roast recipe. Figured it was the last pot roast meal until Autumn rolls around.

A thread here Hungry Onion about uses for pomegranate molasses had me trying some of it tonight. Chuck roast was brown in olive oil, and removed from the Dutch oven so I could brown whole shallots and garlic cloves. Added beef stock and the roast back into the pot, then poured the pom molasses over top.

Brought to a boil, covered, and then into the oven to cook at 300° in the oven for 3 hours, turning the beef halfway through. Removed the beef and kept warm, and temporarily removed the garlic and shallots with a slotted spoon. Poured the remaining liquid into a fat separator, then added the “good stuff” back to the Dutch oven and reduced a bit, adding a flour slurry with ground ginger to thicken as a gravy. Returned the garlic/shallots to the pot.

Slices of pot roast with the gravy, and sour cream mashed potatoes and peppered glazed carrots were the sides, along with wine. 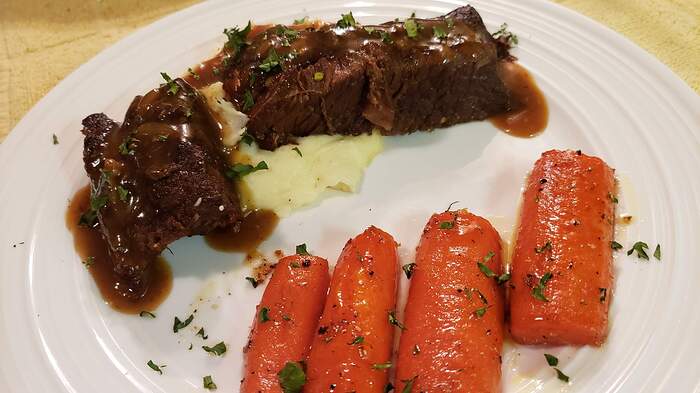 I have to find this.

Woks of Life’s Chinese Egg & Tomato Stir Fry, with a little garlic chili crisp on top. I’ve made this once before, years ago, but had forgotten about it. it may not look like much, but it’s delicious. The egg gets seasoned with a little sugar, Shaoxing wine (i subbed dry sherry), white pepper, and sesame oil. the only other ingredients are tomato and scallions and a little water. it comes together super fast, and is such a homey dish. 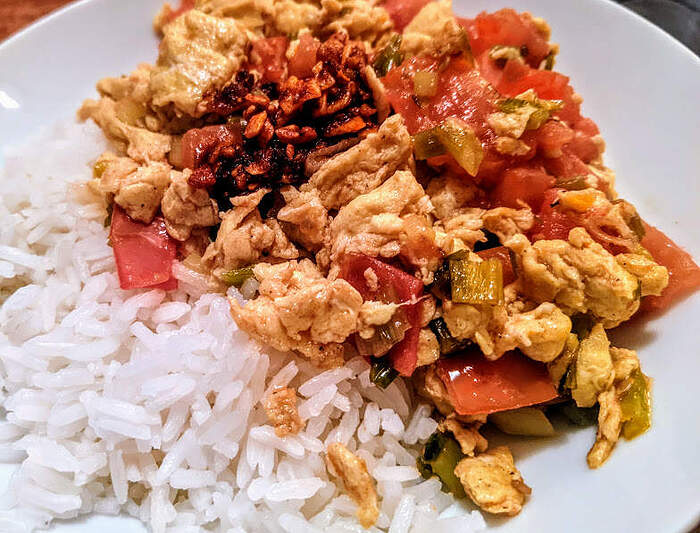 We enjoyed a sensational dinner at NJ Monthly top 30 restaurant James on Main in Hackettstown, NJ. Details and pictures are in the link below for those that might be interested.

We enjoyed a sensational dinner at James on Main. It was our first but definitely not last time at this NJ Monthly top 30 restaurant. The food and service was outstanding. I highly recommend it. We have to find a way to add this to our regular rotation. It was well worth the almost 1 hour drive. There is a choice of a two or three course tasting menu. We decided on the three course tasting menu. For the first course we enjoyed an excellent beet salad with pickled vegetables, toasted pumpkin see… 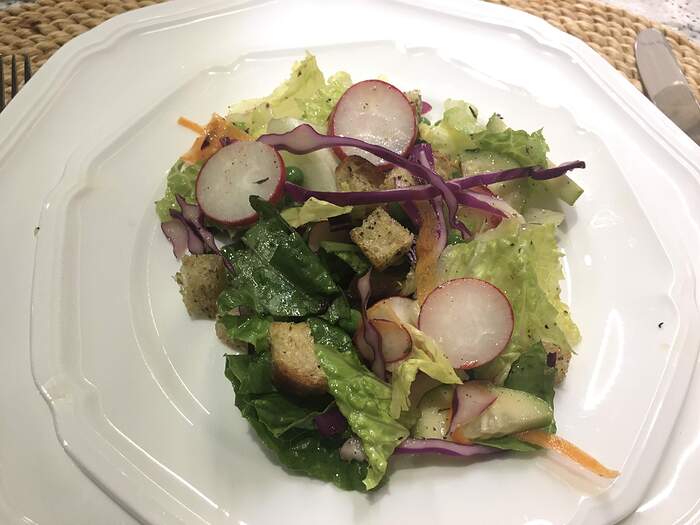 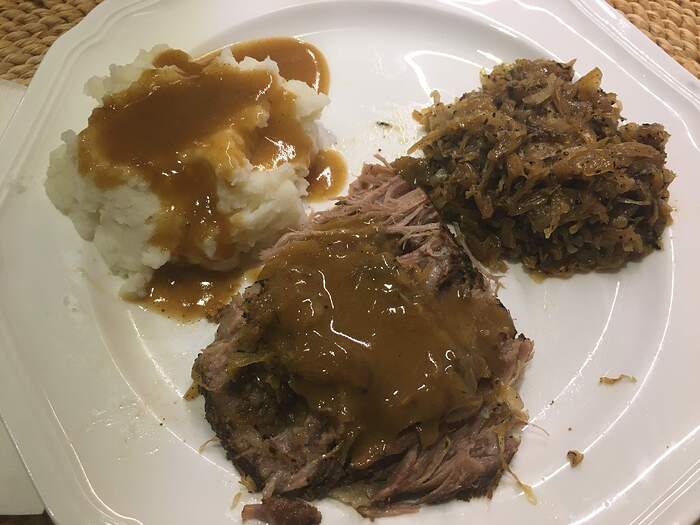 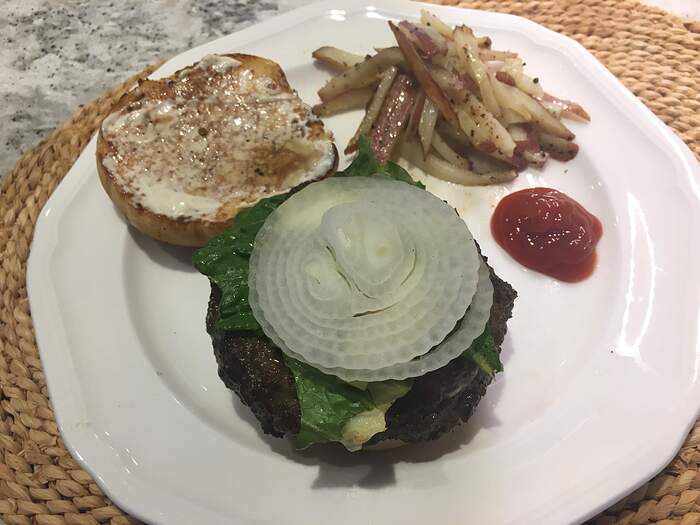 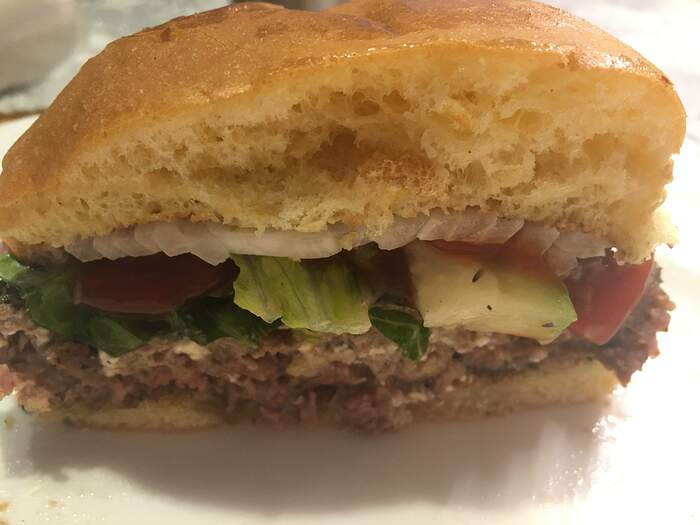 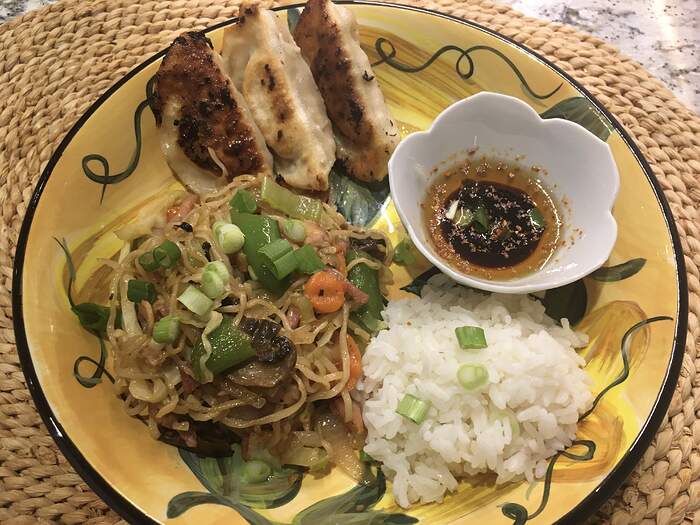 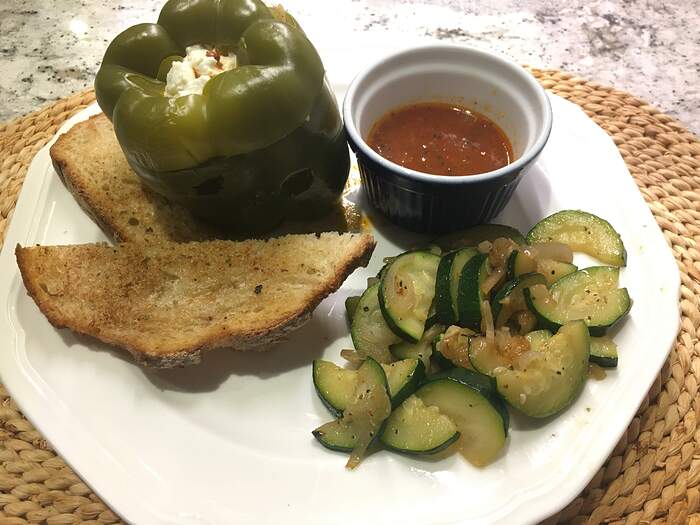 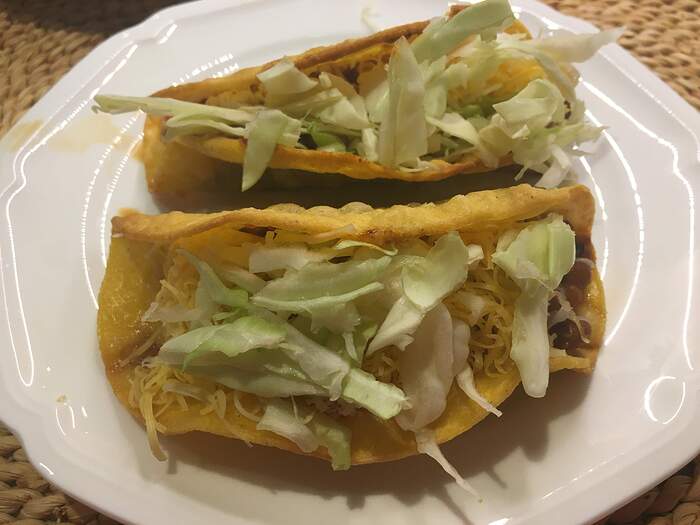 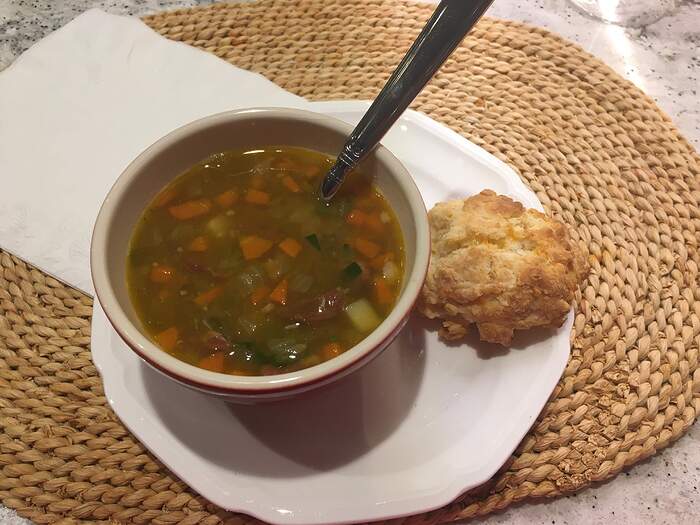 Almost forgot to mention the cute little stuffed bell peppers with the hats - a throwback to H’s childhood. He made them and used goat cheese, which overwhelmed the other bland flavors. But he gets an A+ for effort!

I had a busy prep day, but dinner was takeout 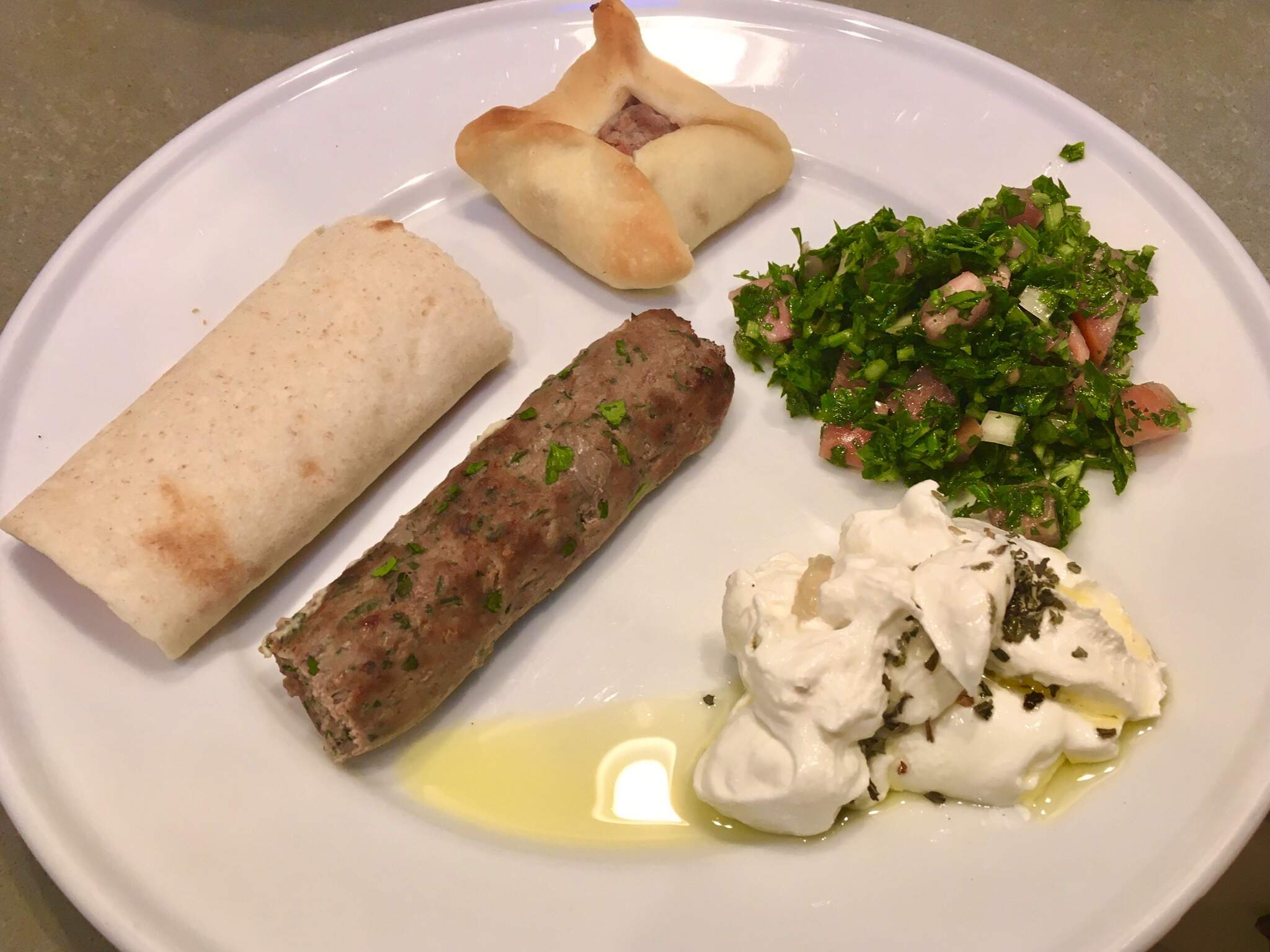 Dinner yesterday was the last of the beef stroganoff, ranch butter broccoli, and sauteed haricots. 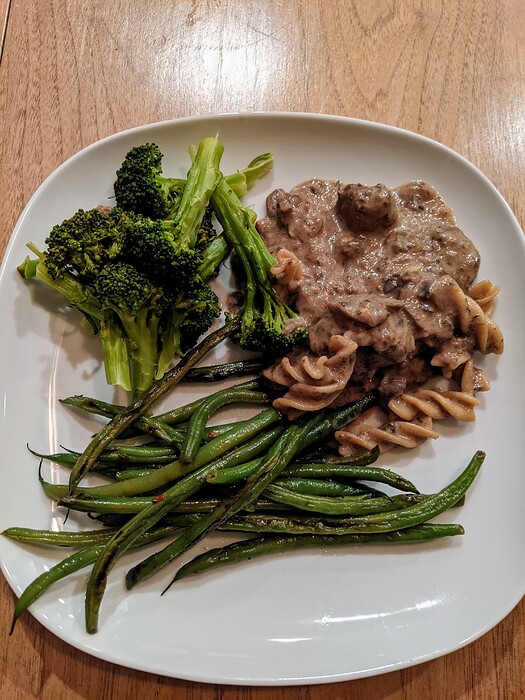 I ordered and enjoyed a Greek salmon on a bed of arugula, topped with marinated feta and olives, from my Chef friend. 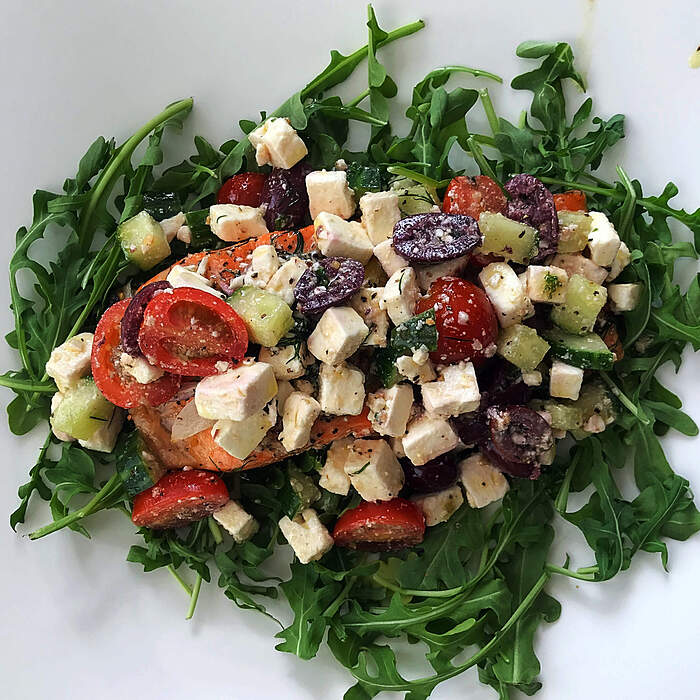 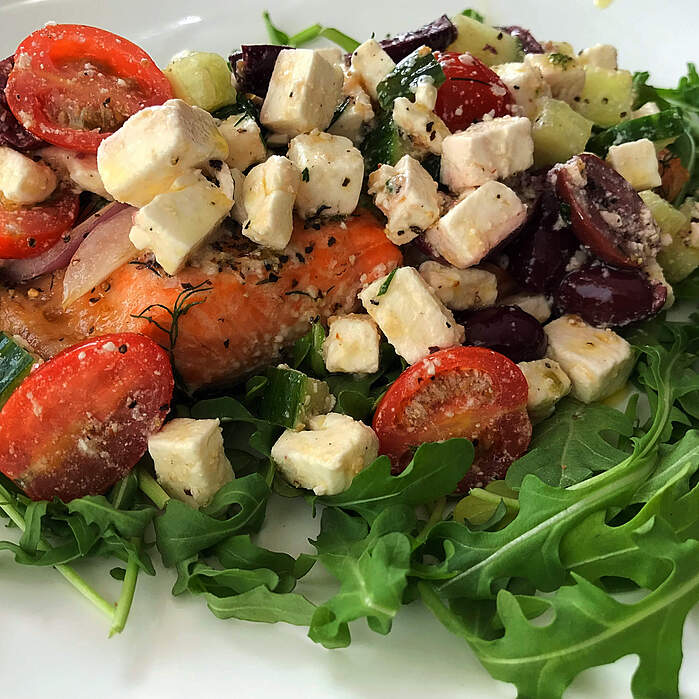 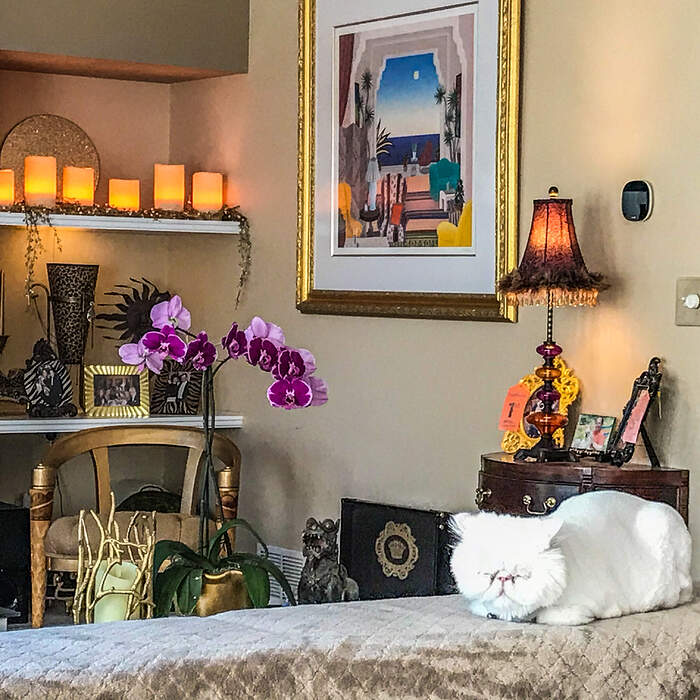 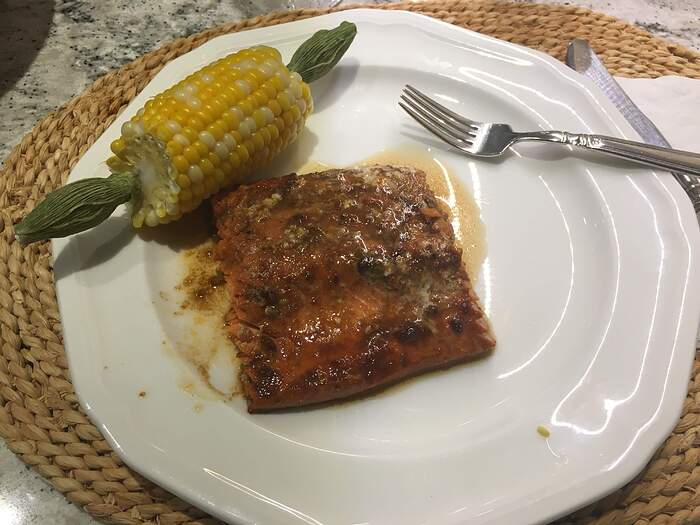 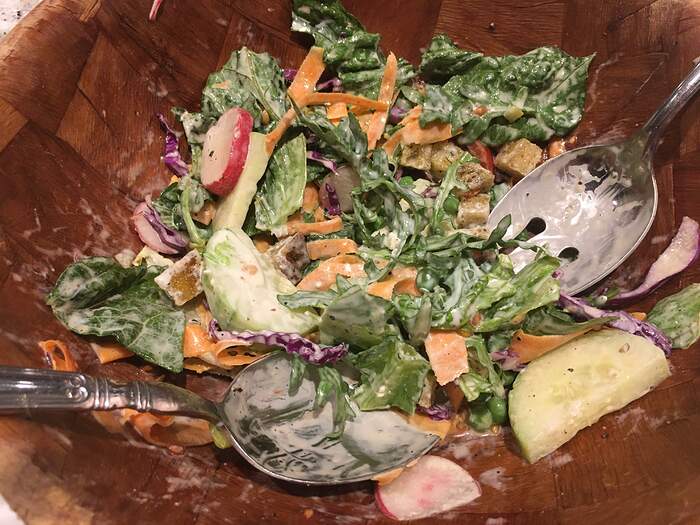 Dinner tonight was a reminder to me of what a difference patience makes to a dish.

Tonight’s centerpiece was Kashmiri Rogan Josh. There are two versions of this - Pandit (Hindu) and Muslim. I used a blended recipe for ingredient reference, then adjusted per my mom’s version.

Took two cooking modes and twice the time I anticipated, but it was good.

Rest of the meal was okra with caramelized onions, green beans stewed with onions and tomatoes, paneer makhani, and dal (freezer). Plus GF parathas and naan (from the freezer) and rice.

(Thankfully I had just an egg as combined breakfast and lunch.) 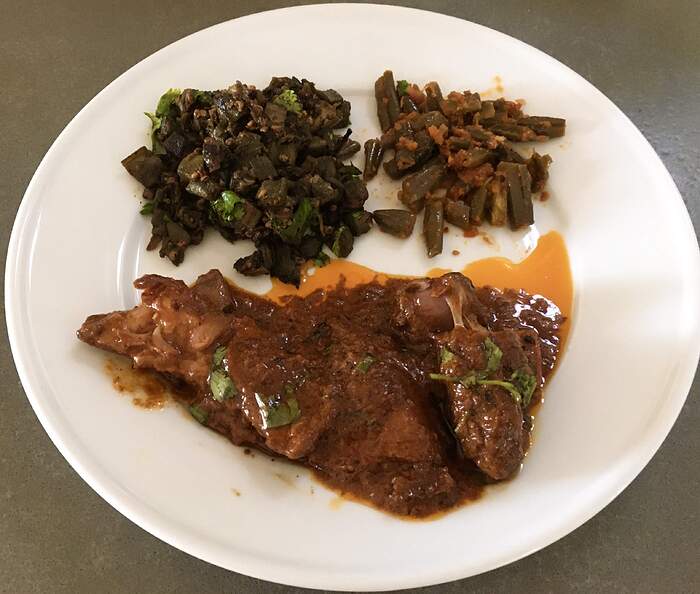 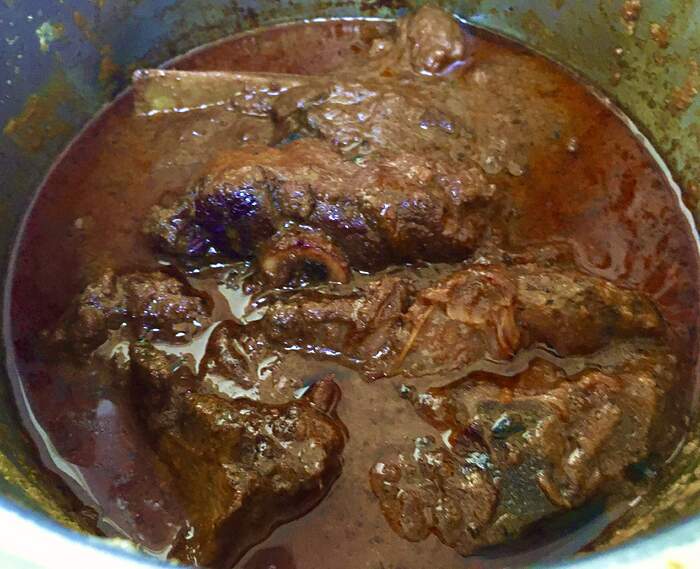 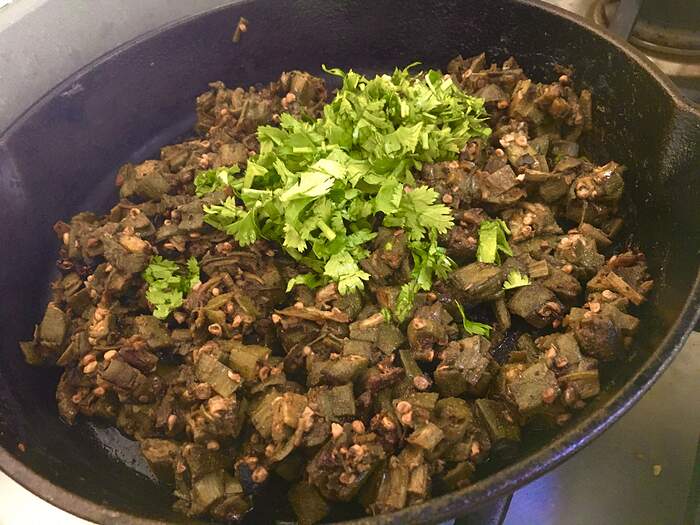 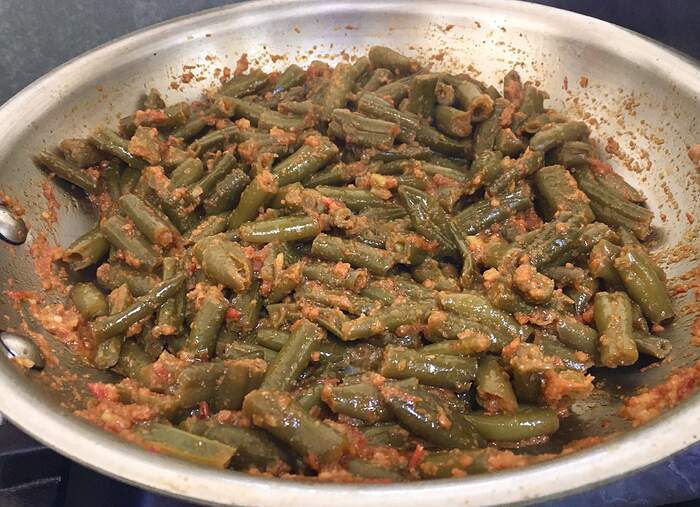 This is our idea of comfort food, not particularly healthy, but oh so good! 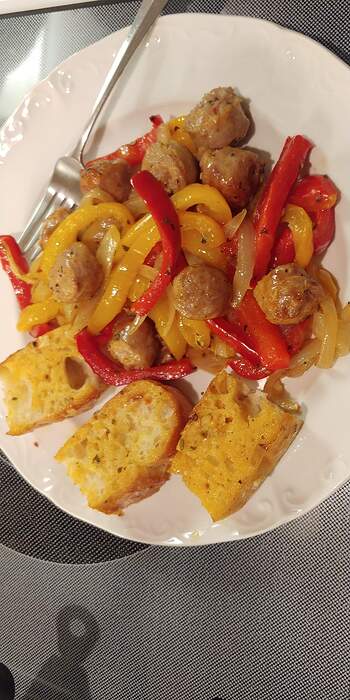 Tonight was simples: BLTs the BF made, with a smear of his chicken salad just to make them fancy. His on a sweet bun, mine on toasted rye. His potato salad for us both. Last of the Zingerman’s bacon - sadz. i’m going to have to get some more. 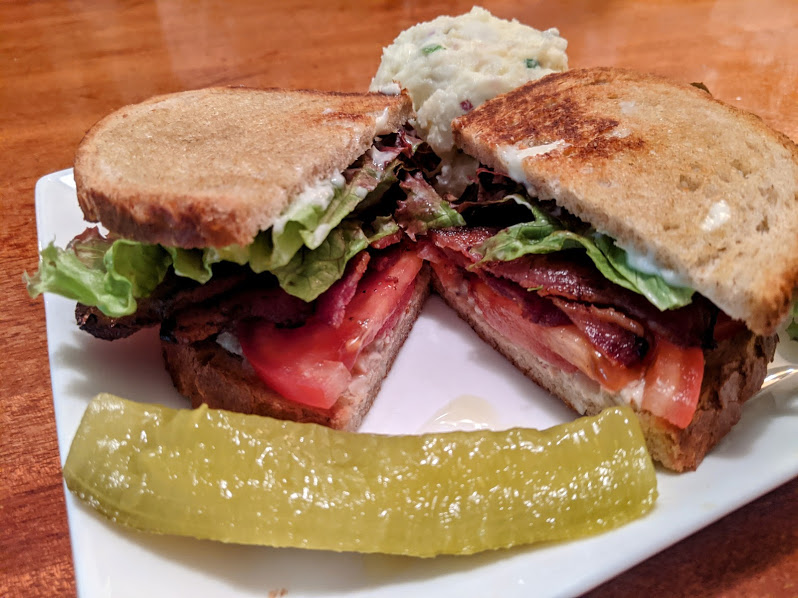 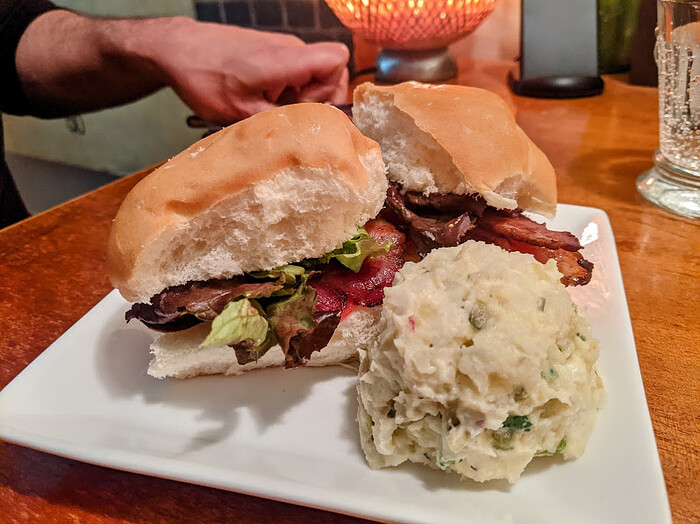 I’ve always had okra with both onions and tomatoes. I’m curious to try it with just onions. Do you like a slight char on the okra?

I needed a way to use a bit of this and some of that, so “chili con everything” it was. More clearly, this is butternut squash chili with pulled beef brisket, black beans, and hatch chiles that I previously roasted and froze. 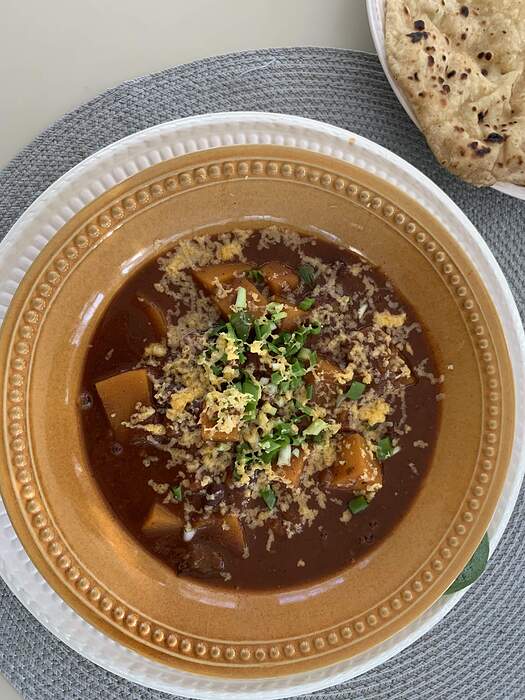 The “con everything” part is that the pulled brisket was a leftover with just a little BBQ sauce. Its flavor melded seamlessly with the sweetness of the butternut (fall storage crop I’m still getting from my CSA). I subbed a kibbeh seasoning blend plus smoked paprika for the chili powder that I did not have, because hatch chiles would bring the heat anyway. I grated a Double Gloucester cheese with spring onion over the top for a hit of dairy richness.

You can see a (reheated leftover) chapati peeking in at the side of the photo.

Everything played well together.

Definitely dynamic and the Greek Salad is exceptional.

And of course I am a big fan of the kit kat ! He is taking a siesta !

I’ve been struggling with potato salad recently. My family will eat anything with potatoes and homemade mayo. They just finished a batch yesterday and I’m kind of upset no one complained. The smashed style in your picture is popular in Baltimore. Would you happen to know the type of potatos used and other ingredients?

Does this ever happen to anyone else? You’ve been making something your whole life and then you start overthinking and forget how to make it?

It’s the BF’s recipe so I’m not sure, but I know it’s yellow potatoes, peeled, minced shallot, sweet pickle relish, mayo, s&p. And yes, boiled enough to lightly smash. He may throw in a little granulated garlic too. I’ll ask him later.