Voice of dissent here on the tiktok feta pasta thing. I thought it sounded really good. Cooked it 2 nights ago. No one here liked it. Some of us tolerated it. It was the first time in forever that I trashed leftovers, because they all told me they WOULD NOT eat them. And I couldn’t bear to have any more after the dinner, when it was fresh and already only so-so.

So sorry, but I’m going to need a few more details. I have not sous vide lamb. I happen to have quite a bit, but a “blade roast”.

It looks like you sous vide the lamb chops at 125 F. 2 hours. How did you choose that temp? Does it matter for how long? Did you do anything after you took them out of the bag?

It was Saregamas suggestion for 125 degrees . Seared after cooking. A little oil and butter.
Made sence for the temp . Asparagus at 180 degrees. 9 minutes. Added lemon salt and olive oil to the bag . I always peel the asparagus stalks before cooking.

I planned on making tacos on Monday to have with margaritas for National Margarita Day but ended up making something else. Since I had the fish defrosted I made them Tuesday. Sea bass tacos with cabbage lime slaw and pickled onions. Instead of soft tortillas I had mine on tostados. I was in the mood for some extra crunch. 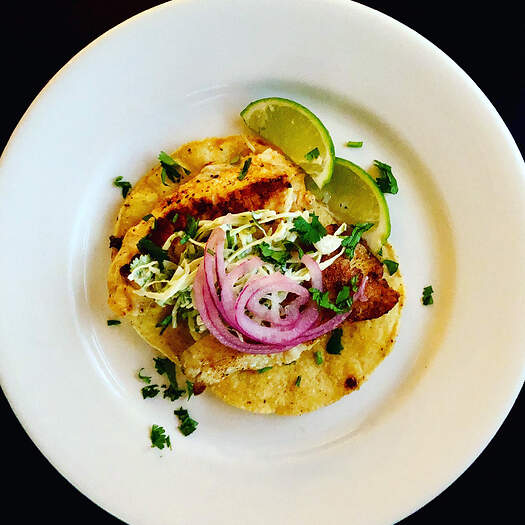 Thanks. I lucked out with the colors.

Thank you for the mentioning of our photographs from Makro. Superbly splendidly lovely Vegetables and octopus too.

Does it matter for how long?

It does matter for how long, although there is quite a bit of leeway with sous vide. With lean meats/thin cuts, you don’t want to go more than maybe 3-4 hours. The temperature doesn’t change, of course, but the meat can develop a weird spongy texture after a while. It doesn’t take more than an hour or so to get a thin cut fully up to temperature, and there’s really no benefit to going beyond that other than how it fits into your meal timing.

With longer braises, you get even more leeway, although again I try to leave things in for the shortest possible time to achieve the final texture I prefer. For instance, I sometimes do pork shoulder sous vide instead of in the smoker. You can leave it for a couple of days if you want, but I find 16-24 hours is enough to get it tender. Beyond that the texture starts to deteriorate - it won’t be ruined or inedible, but it can start to get a little stringy. 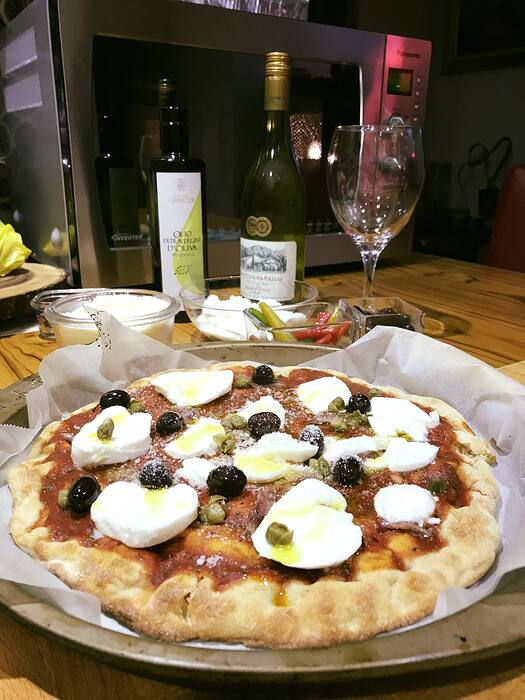 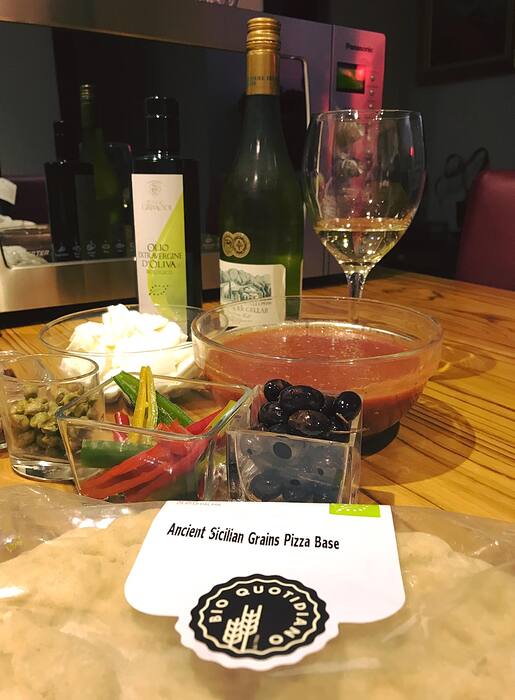 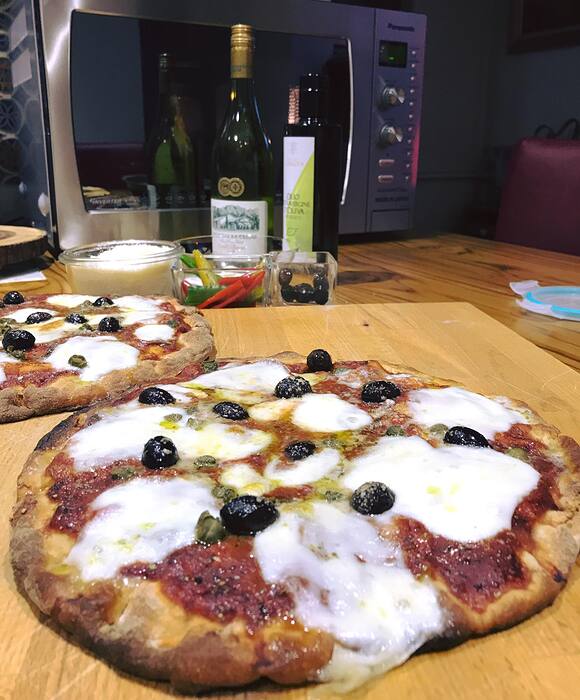 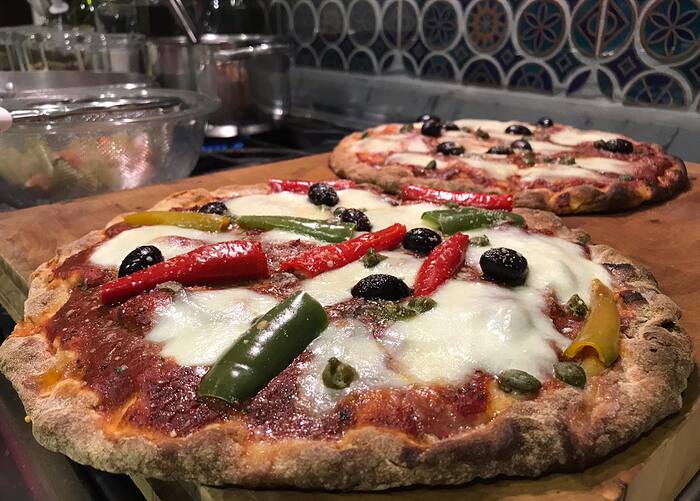 Last night’s dinner was a true masterpiece. We wanted veggie subs but he required bacon on his to make it “complete”. I knew I would cave and want bacon too, so now its not a veggie sub. So then we aimed for a BLT sub, but we were out of lettuce. So I’ll just call it a garbage sub? Mine had bacon, tomato, spinach, roasted red peppers, black olives, mozzarella, and a roasted garlic aioli. His was slightly different.

I was not planning on photographing it but now I regret it. The sub was messy and all over the place, but damn it hit the spot. 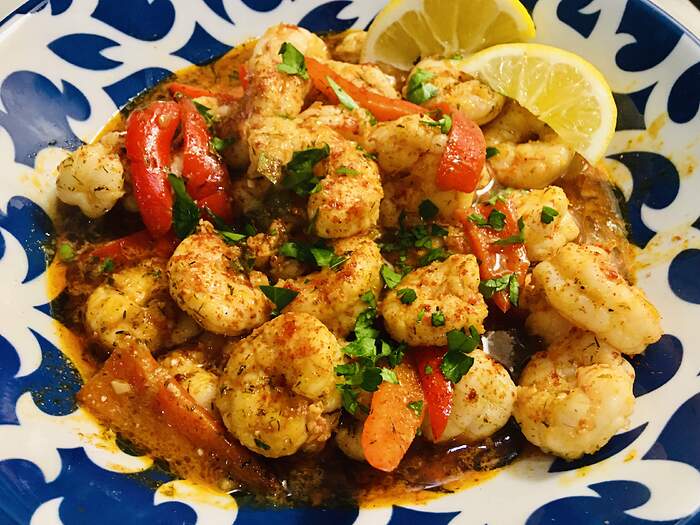 There’s a couple of different legends about the origin of this dish, but the name is a misnomer as they’re not grilled and there’s no bbq sauce. But! it’s yummy.

They’re usually done w/shells on but I had these and forgot to adjust the recipe so they went a couple mins too long but were still firm & tasty. 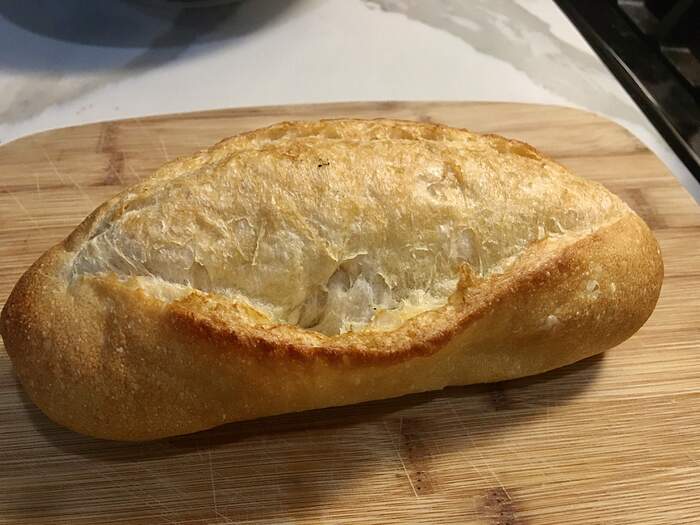 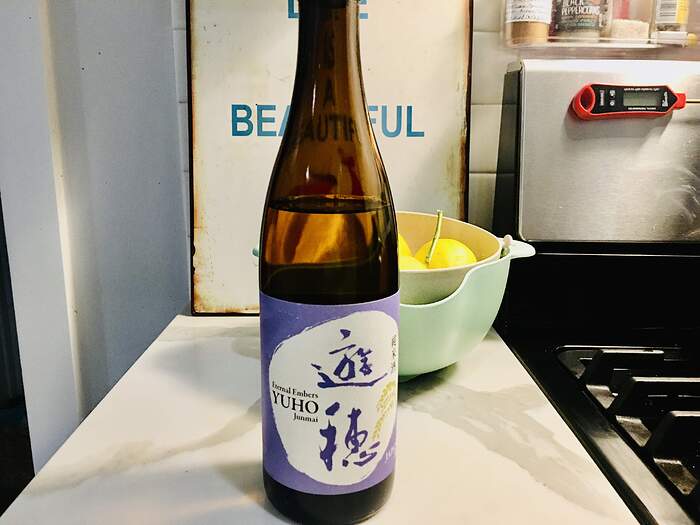 This full, rich Junmai is created by Miho Imada, one of the few female tōjis (brewmaster) and from the only female owned brewery in Japan. It has lots of umami & notes of dried fruit & nuts and is one my favorites with spicy foods like Thai & Creole. 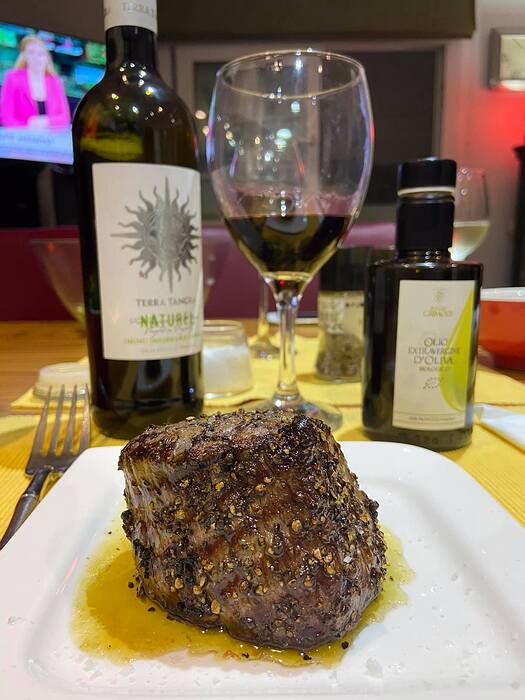 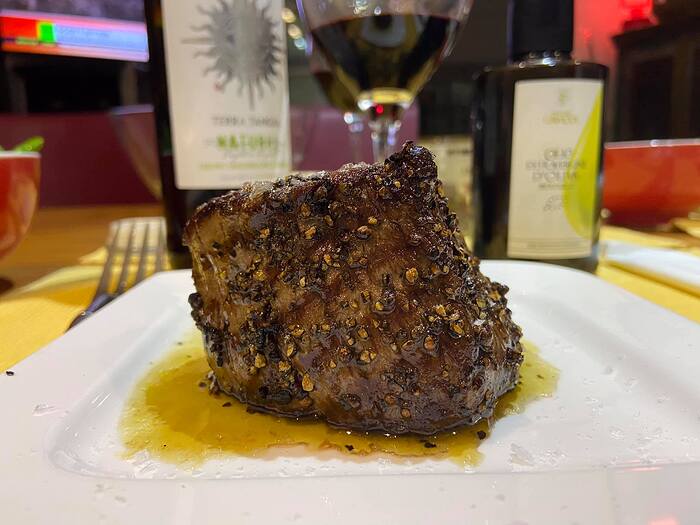 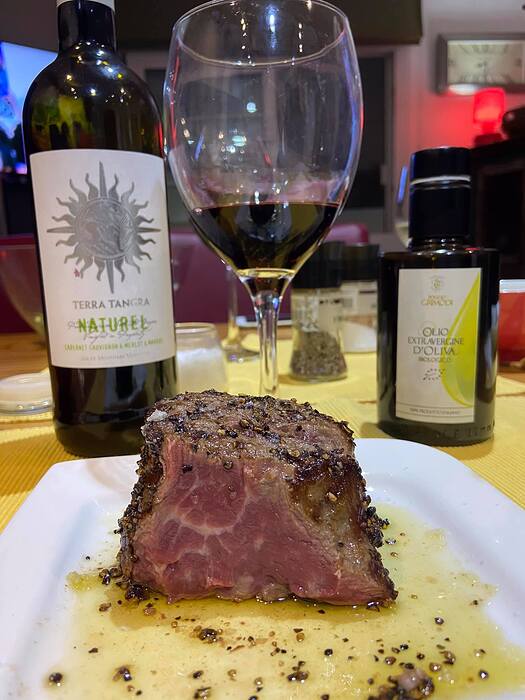 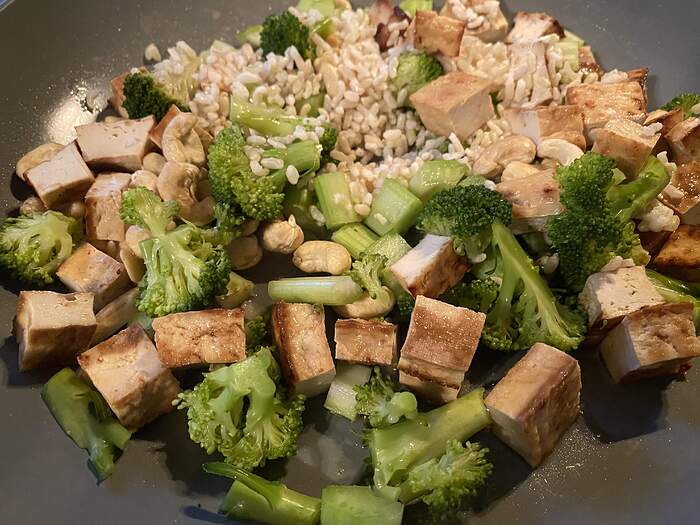 The juxtaposition of your meal @Rooster and @Barca’s made me laugh today. (Big hunk of unadorned beef versus a tofu thing, which is the way I roll.)
I needed the laugh

Tasty easy dinner tonight. Tacos with filling of ground bison, RG vaquero beans and corn in Frontera taco simmer sauce augmented with Valentina black label hot sauce, cilantro, pickled red onions, sliced radishes, and avocado drenched in lime juice on some awesome corn tortillas I had. So happy I have enough left for a repeat for lunch tomorrow!
ETA Plus 3 more D/L portions in the freezer! 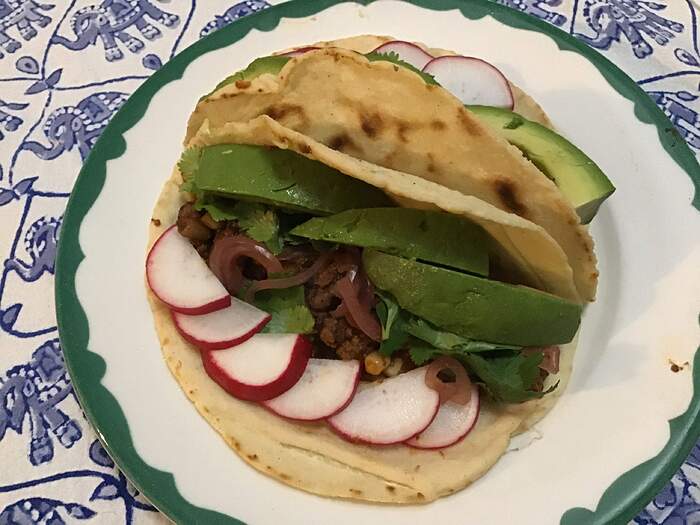 @emglow101 inspired me to bust out the sous vide for pork tenderloin tonight. Butterflied, pounded, lined with Genoa salami and stuffed with bastardized duxelles (mushrooms, onions, bacon, green olives and rosemary cooked down and bound with Parmesan cheese), then into the bath for 2 hours at 135. Normally I do tenderloin at 130 but I wanted the filling to be a bit warmer. Served with roasted Brussels and pan-roasted tomatoes with vermouth. 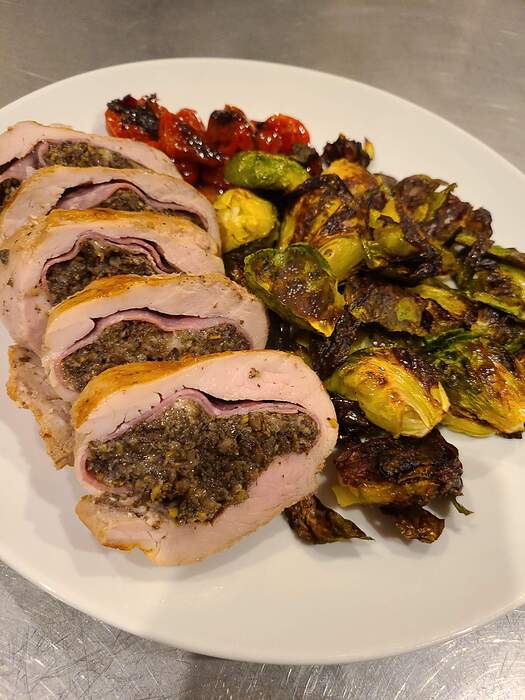 Happy to provide. Its what makes the world go round.