What to eat in Penang and Singapore

Also, would love any advice on good things to do between meals, and best places to stay to have good access to food and sites.

Indigo Hotel in Katong has a Peranakan-Nyonya theme which extends into its rooms.

Thanks so much for the rec! We try to stay at IHG hotels where available. We stayed at the Intercontinental near Raffles last year, and it was fine. The Hotel Indigo Katong (member of IHG) sounds like a slam dunk for our next trip.

Would love to know about must-try dishes for both places (and specific places to get them, if possible).

The founder of Hill Street Char Koay Teow, Ng Chang Siang, had also just passed away this Mar at the age of 71. However, his son, Ng Yeow Kiat, has taken over the business nd cooks as well as his father.

I shall compile a list of must-tries for Penang shortly and concatenate that here.

Thank you so much for this post, which is perfectly timed for us. I have been following this thread for a while. We just arrived in Singapore from the East Coast of the US (nearly 24 hours of travel all in, totally bushed out and zombie-like; got to hotel at 2AM) and have had showers and are ready to get to the best food we can find. This post will be a great guideline for us. I will try to post what we find over the next three days, before we head out to Bali. Fish head curry and laksa are high on my list. My honey must be gluten free so we will be looking for rice noodles for her.

I will try to post what we find over the next three days, before we head out to Bali.

Yes, please do report back on how your dining experiences in Singapore. Do check out Glutton Bay by Makansutra, amidst the dining options at the Esplanade. Syifa’ Satay is especially good.
http://www.makansutra.com/eateries-stalls.aspx?mid=1

If you yearn for something a bit more familiar, check out Dempsey Cookhouse.

Many bakeries in Singapore now offer gluten-free items, and supermarkets are also full of them.

one of the Michelin-starred hawker stalls in Singapore

Does Michelin operate to different standards for Singapore than it might in Europe? I really can’t see them awarding a star to anywhere so casual in the UK, regardless of how good the food might be. Or is it that the food here is so good, it can’t be ignored for “stardom”?

We tried the Mankasutra Glutton Bay; got both the satay and the coffee ribs. Both good, especially the ribs, although both somewhat on the sweet side for me.

Tomorrow we will do a tour of places around Chinatown. I have been trying to put together an independent program, but we’ll only be here until Monday and several places are either closed (Heng Kee for remodeling until Feb 2019) or have weekend hours that don’t work for us. Couldn’t get a reservation at Folklore but may try again. But I’ll keep at it. We’ll see.

Both good, especially the ribs, although both somewhat on the sweet side for me.

I’m not surprised - that was the first observation that even Malaysians have when they taste Singapore hawker food - despite the common origins and even names given to the respective dishes, Malaysians will always say that the Singaporean version of the dish is sweet!

Ah, I totally forgot that Hong Lim Food Centre (where Heng Kee is located) is closed for renovations till Jan next year, eventhough I’d updated my thread with that info last Oct:

Heng Kee is a four-decade-old hawker stall specialising in curry chicken noodles at Hong Lim Hawker Centre. Started by the late Mr Tay Yong Heng (who passed on at the age of 68 back in Sep 2013), the stallowner-cook is now his son, Tay Khang Huat, 46, who’s managed to replicate his father’s cooking to the “t”. Same flavours, same textures. If I don’t see the person behind the stove, I’d not been able to tell that the son has taken over from the father. He’s assisted by his mum, the feisty Mdm Th…

Does Michelin operate to different standards for Singapore than it might in Europe?

I still remembered how incredulous I felt when Michelin, in its first Japan Guide in 2008, awarded 3-Michelin-stars to Sukiyabashi Jiro. I’d been there way before then: with its wooden counter and 10 counter seats, it was a far, far cry from the luxurious temples of gastronomy that were the 3-Michelin-starred places in France. We all knew that, up till then, ambitious French chefs had been known to run into huge debts borrowing money so they could renovate their restaurants into Versailles clones, in order to impress the Michelin inspectors and ensnare that elusive 3rd star. Sukiyabashi Jiro looked like the closet room of its French counterparts.

Then, when Michelin first went to HK in 2009, it ran into controversy from the start when Hongkongers accused them of ignoring the smaller eateries like the dim sum shops, the “cha chaan teng” casual cafes, and the “dai pai dongs” (street-side/hawker eateries) which formed an indelible part of HK dining culture. In response, Michelin awarded Tim Ho Wan , a cramped 20-seater eatery (its 2 feet-by-2-feet toilet even have a wet mop propped up against a wall) one-Michelin-star in the following year. There is NO way any restaurant in France could stand the ghost of a chance to get away with that.

So, when the Michelin folks came to Singapore in 2017, they already knew what they had to do to gain some “street cred” among Singaporeans: just remember to NOT ignore the street food culture in Singapore. That’s how we ended up with one-Michelin-star dumpsters like Hawker Chan:

I still haven’t gotten over how much Michelin has changed with regards to its rating of eateries. My first 1-Michelin-star experience was more than 3 decades back - at Roger Verge’s Le Moulin de Mougins which showcased his “Cuisine du Soleil”. Gastronomic trips to France were a real adventure in those days - pre-Internet, we had to depend on maps, our copy of the Michelin Red Guide and the goodwill of locals who barely tolerated our rudimentary French, in order to find our way around. Michelin-s…

There is NO way any restaurant in France could stand the ghost of a chance to get away with that.

Nor the UK, Italy, Belgium or Spain - the only European countries where I’ve eaten Michelin food. And thanks for the succinct analysis.

On the same line, I look forward to Michelin awarding a star to Grandma Pollard’s Chippy - a fish & chips restaurant about an hour from us - and one of the finest in the northwest.As you know, chippies are an indelible part of our food culture. I’ll not hold my breath, though

Nor the UK, Italy, Belgium or Spain - the only European countries where I’ve eaten Michelin food.

The irony is, Michelin imposes its French culinary hegemony over even French or Continental restaurants in Singapore. So Robuchon or Boulud’s restaurants here are actually held to the same exacting standards as they would back in Europe or America.

Frankly, I think the best Singapore hawker stalls should be listed under Bib Gourmand, at best. To award them a Michelin star is laughable.

I look forward to Michelin awarding a star to Grandma Pollard’s Chippy - a fish & chips restaurant about an hour from us - and one of the finest in the northwest.

the best Singapore hawker stalls should be listed under Bib Gourmand, at best

Spent a few hours yesterday on an organized Chinatown food tour. Did two hawker centers – the big on behind the Chinatown Visitor Center, and Maxwell Street. Basically the guide got stuff while we all waited at our table so I’m fuzzy which stall it all came from, but the best things were the chicken rice at Chinatown, and the carrot cake and the roasted duck/pork belly combo from Hock Soon at Maxwell, which had long lines by the way. The carrot cake is the white part of the stuff on the green plate in the photo, and the meat is next to the green plate in the other photo. Sorry the pix aren’t great – I’ll try to do better later.

Hope to get to Ocean for fish head later today. 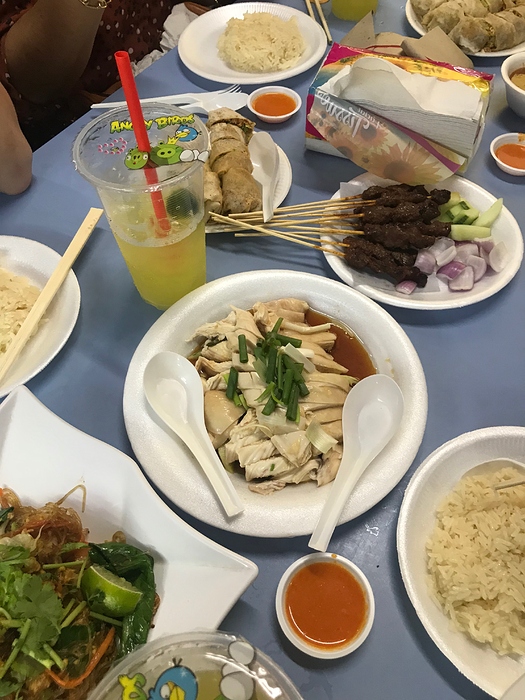 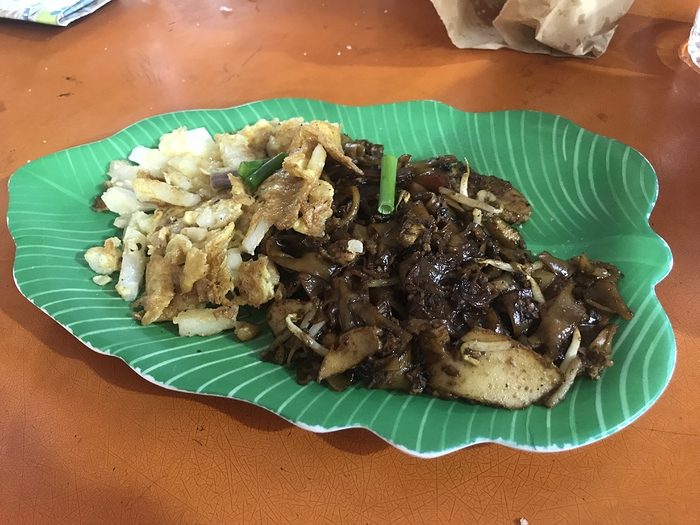 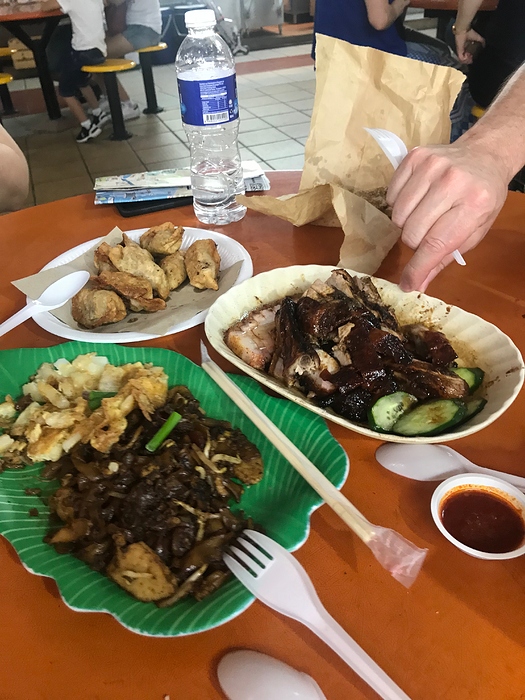 Love the food there, but the disposable styrofoam plates and plastic forks/spoons annoy the hell out of me (and many other Singaporeans, too).

Made it to Ocean Fish Head Curry last evening. Main location in Toa Payoh. Since I was eating it alone I ordered half a fish head; you can see it there in the photo. It was excellent fresh and sweet fish. The gravy was lively in flavor, a bit sweet of course, and spicy but not too spicy. I polished it off. My sweetie of course would have nothing to do with it so she made do with some nothing special but OK chicken and spinach from the buffet. Well worth the trip out there. I would, however, comment for others that this location is away from the CBD and is basically in an enormous high-rise housing estate. Few non-singaporeans show up there, so they were somewhat mystified to see us, obvious westerners. Not much in the way of other stalls either, at least Sunday evening. Now I’d like to try one in a more Indian place to see how the curry differs – maybe Banana Leaf Apollo??

We leave today so will have to save other possibilities for our next trip, which may be as early as next November. 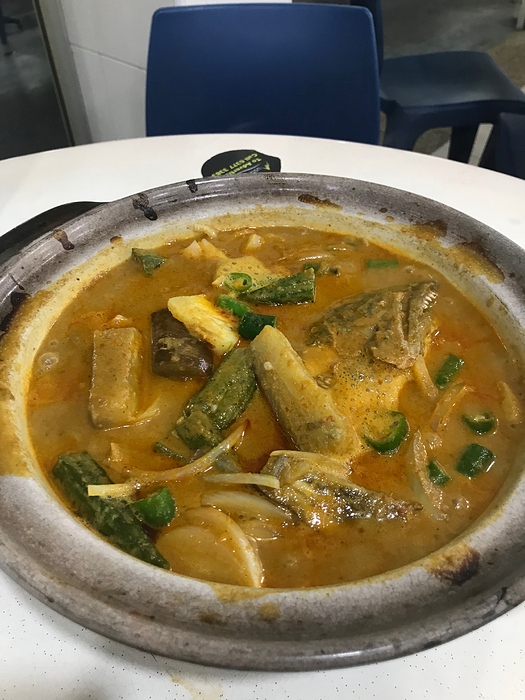 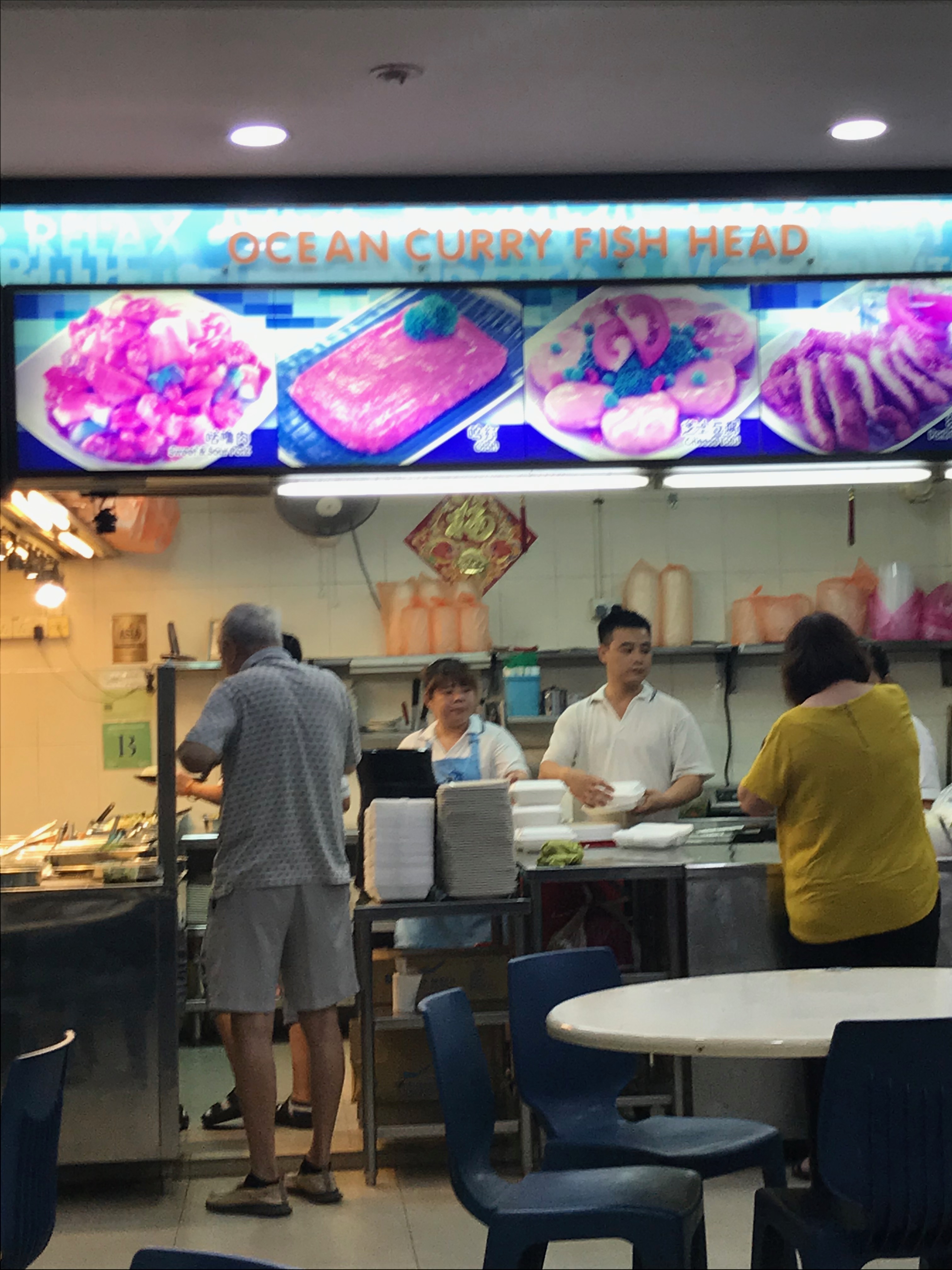 Made it to Ocean Fish Head Curry last evening.

Now I’d like to try one in a more Indian place to see how the curry differs – maybe Banana Leaf Apollo??

Banana Leaf Apolo (sic) is a good representation of Singapore-Indian-style fish head curry. It’ll have a heavier scent from the use of fenugreek, cardamom and other Indian dried spices, some tamarind will be added for the sourish tinge, and it does not have any coconut milk in its rendition of the fish-head curry. This is, in a way, quite representative of Tamil-style cooking, which does not utilise coconut milk, unlike their fellow South Indians - the Keralans.

She wants to change up Samy’s Curry, but dad’s not ready to let go

It’s had a good run since the 1950s, but should the famous family-run restaurant change with the times? That depends on whether you’re the ...

Hi Peter. Thanks again for the Ocean rec. The store was a bit away from the central area, but well worth the half hour bus ride. Our fellow diners seemed like genuine locals, added points for authenticity. Will definitely hit Ocean up again on future visits. 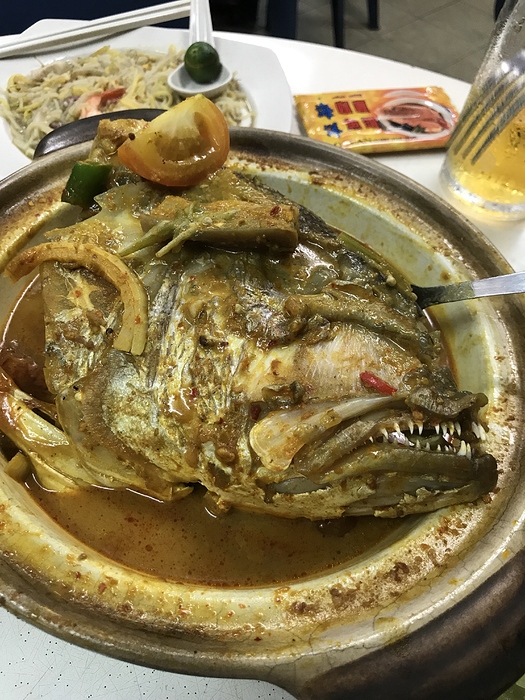 Glad you enjoyed it. Ocean also has a branch in town near Amoy Street Food Centre which, in itself, is also a destination dining spot if you’re looking for Singapore hawker fare.